Perched atop some large edifice in Assassin’s Creed Syndicate‘s London, I hesitated. Many slickly-presented columns of light reached toward the sky in all directions — each one indicating yet another thing to do in an effort to satisfy the game’s calling for you to do everything. I was frozen less from indecision and more from just simply being overwhelmed. There’s so much to do. So much.

The sprawl of this year’s Assassin’s Creed is greater than ever. Syndicate‘s London is reported to be 30 percent larger than Unity‘s Paris. Ubisoft used that extra real estate to cram in as much additional content as possible. Disingenuous maybe, but it’s to the developer’s credit that this patchwork quilt of stuff to do doesn’t show its seams nearly as often as one would expect.

For the first time in several Assassin’s Creed installments, it feels as there’s mostly an overarching goal to work toward. The majority of the game deals with the idea of changing things to make a better London, and that’s reflected both in the story missions and a lot of the side content. Regardless of what endeavor you choose to embark on, chances are that it’ll make baby steps toward that goal. Many baby steps later and progress can be seen. 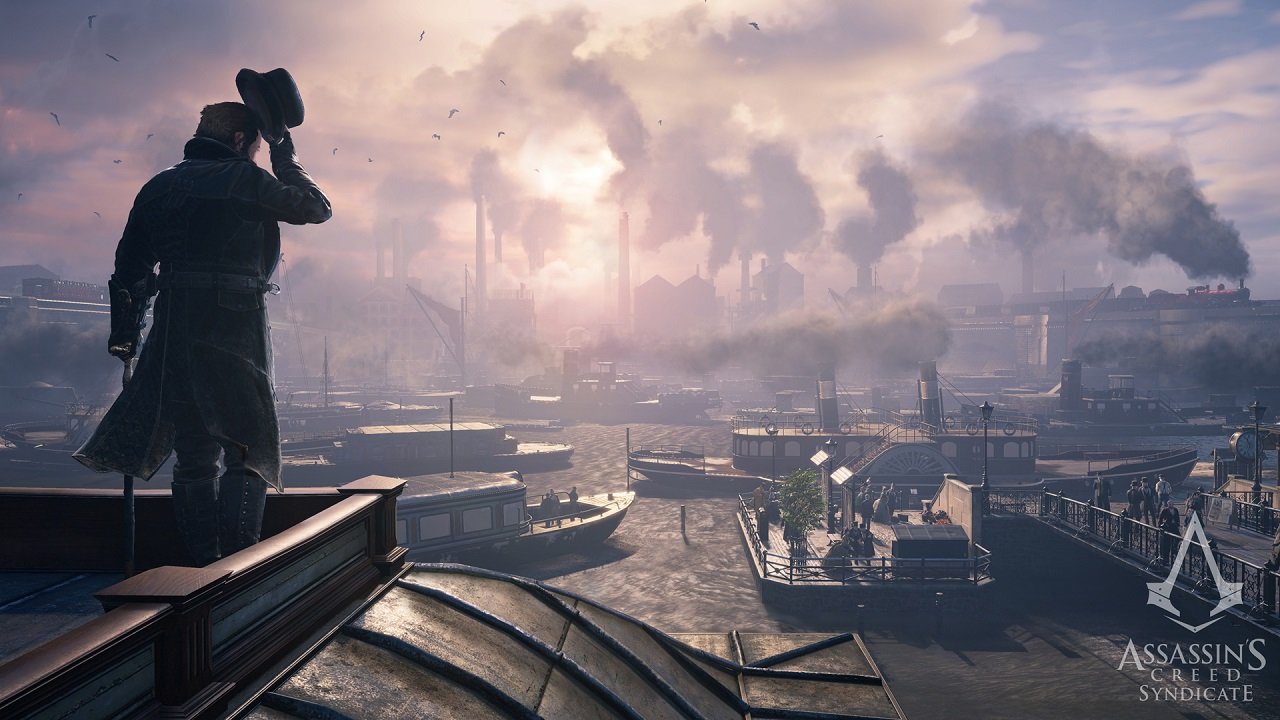 An early sequence concerns itself with getting illegal opiates in medicine off the streets. The player must trace this back all the way up the supply chain from seller to distributor to manufacturer and, eventually, to the doctor who’s behind it all. One high-profile assassination, and the city’s a little better off than before.

That’s an evident narrative example of how Syndicate conveys this ever-present march toward improving London, but gameplay elements also support it. The biggest side-task asks that you liberate sections of town. Once enough of those are cleared, there’s a gang war to take over the borough. And, once that’s done, that particular one-seventh of the city is rid of Templar influence.

It’s a formula that Assassin’s Creed has drawn from before, but it’s hard not to feel as if it works best in Syndicate. That persistent slow-burn sense of accomplishment is present, as it usually is when you see the tides turn in an open-world game. But, the way Syndicate connects gameplay to narrative makes everything really come together. Progress is being made and it’s apparent in the way the town goes about its business.

A pivotal reason that this effort succeeds is because Syndicate has a cast of characters that are interesting and memorable. Crawford Starrick is easily one of the best villains in the series, as he puppeteers all of the going-ons. A late-introduced person is simply divine in his madness. By the time his arc resolves, he reminds more of Batman‘s Joker than anyone from Assassin’s Creed‘s lore.

Anchoring this effort are the dual protagonists: Jacob and Evie Frye. As siblings are wont to do, they have a bit of a rivalry that escalates throughout the course of the narrative. Their relationship is strung along by things their father used to say, as interpreted by them individually. As such, they have differing opinions on their goals and how to accomplish them, and they’re constantly reminding the other of it. It grows tiresome before long.

Really, I suspect that the two protagonist formula was a means for Ubisoft to explore divergent intentions within the course of one game. Evie is hellbent on recovering a Piece of Eden that’s hidden somewhere in London; Jacob’s set on reclaiming the city and fighting for the people’s rights (he’s surprisingly altruistic considering his brash demeanor). 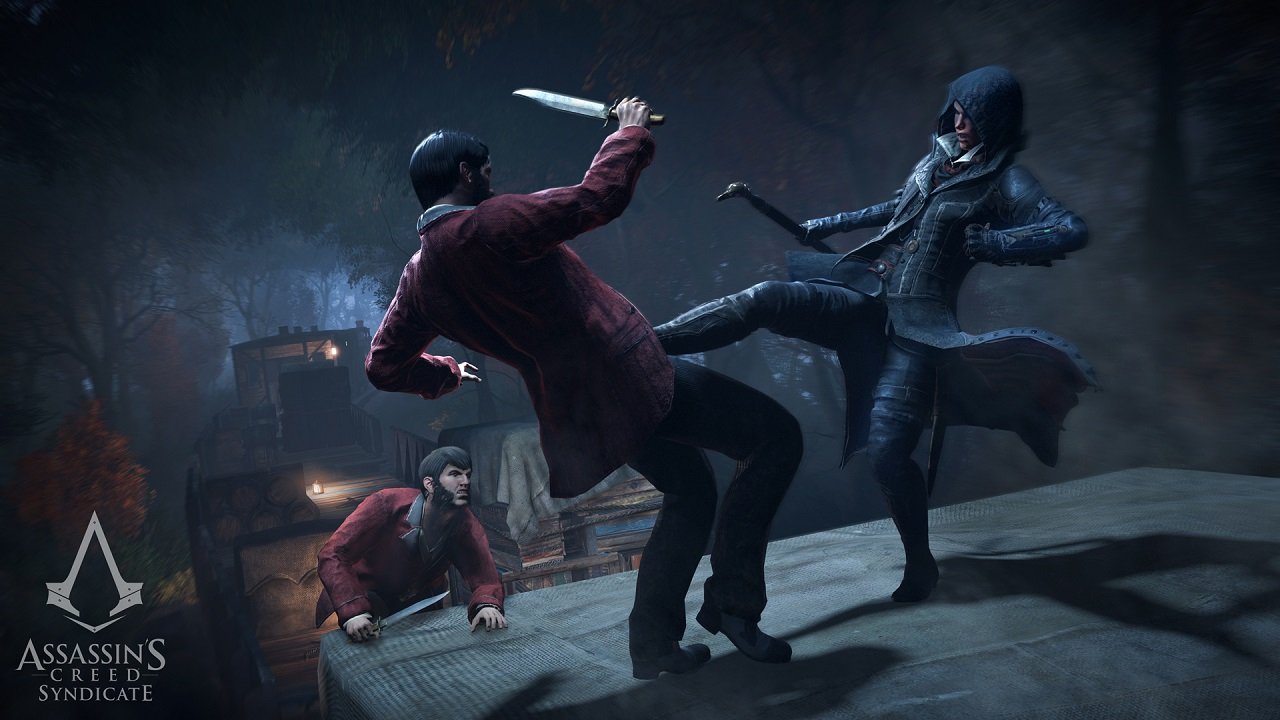 Told within the the arc of a single hero, these interests wouldn’t make for a cohesive game. It’d feel schizophrenic in its approach. But, by breaking it up for two people to pursue, it makes sense. Syndicate‘s better off for having explored both of these angles, thus, it’s better off for having tried the tandem protagonists.

For all the big-picture stuff that Syndicate does right, almost all of its missteps are in the gameplay. The franchise mainstays like non-notable assassinations work just as fine as they always have (although combat still lacks sufficient impact to prove satisfying). It’s the innovative parts that mostly fall flat. Horse-drawn carriages control awfully and are a pain to drive. Kidnapping is mapped to the same button as other post-kidnapping actions, often leading to mishaps with your hostage.

The worst sin comes in the form of the game’s most marketable feature. The grappling hook, even with its finicky nature, makes traversing London quick and simple. But it comes at the cost of almost completely cutting climbing out of Assassin’s Creed. Simply walking up to a building and pushing the left bumper will transport you to the top.

The grappling hook actually feels like cheating after spending eight games getting there the hard way. It’s easy to appreciate Ubisoft saving you a bit of time, but pulling back and reflecting after several hours of play will lead you to realize that you’ve scaled just a tiny fraction of what you have in past titles. Climbing is a major mechanic that drew a lot of people to Assassin’s Creed in the first place, so it’s sad seeing Syndicate relegate it to an afterthought. 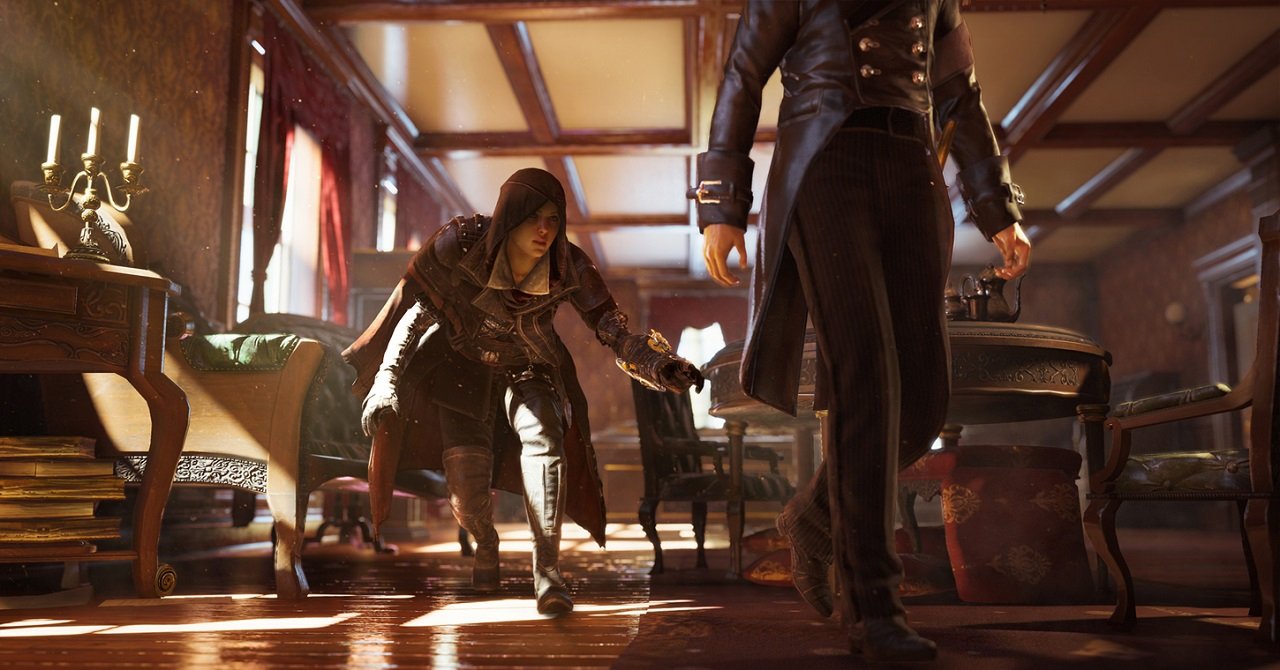 Assassinations are the other large appeal to Assassin’s Creed titles. Syndicate does them better than ever before. Extrapolating upon the “black box” missions in Unity, we’re treated to unique, intriguing, and exciting kills of the game’s most notable targets.

For instance, that doctor mentioned oh-so many paragraphs up? It’d be easy enough to rush in and off him. Instead, I pickpocketed the keys off of a guard to open all the doors in the asylum. Then, I made my way to the basement where I hid the body of a medical corpse, and laid down in its place. I was wheeled up to the doctor, where I assassinated him as he was about to conduct an inhumane experiment on me.

This is where Assassin’s Creed as a whole is at its very best and most shows its promise. Anyone who’s blowing them off is doing themselves a huge disservice and probably playing the game the wrong way. These black box missions are where you get to feel like an actual assassin and get clever with your kills — even if it’s still scripted in a way. It’s a nice compromise after we figured out that open-world scenarios lead to more botched attempts than anything else.

A game of this magnitude is bound to have its successes and failures, and Assassin’s Creed Syndicate definitely has both. But, in most instances, gameplay and narrative are interwoven nicely enough to keep us vested in our pursuit of a better London. As such, it often seems as if the bad isn’t all that noticeable. That’s a threshold Assassin’s Creed has struggled to hit over the years, and this is the first time it has accomplished that maybe since Brotherhood.

One of the more poignant moments in Syndicate is a scene where Crawford Starrick is solemnly playing piano. At the conclusion of the slow, heartfelt song, he earnestly sings “In such a moment, I but ask that you’ll remember me. That you’ll remember me.” We remember you, Assassin’s Creed. And now, we have hope for what else you can do.