A matter of perspective

Ever since its 2007 debut, the Assassin’s Creed franchise has been presented as a one-sided affair. Chronicling the persistent struggle between the Assassins and the Templars, Ubisoft has always framed the story casting the former in a positive light. Assassin’s Creed Rogue has a new take on that formula, which, in some ways, makes it the most refreshing, thought-provoking, and introspective installment in the series to date. 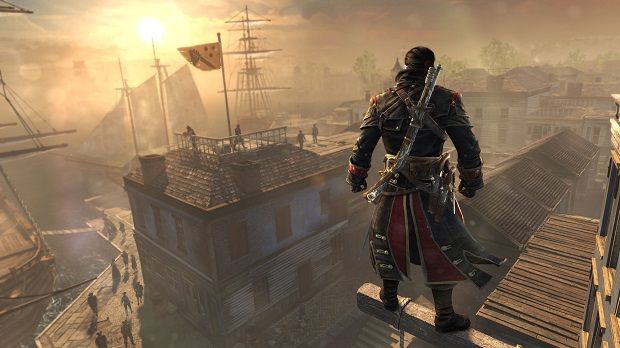 While it’s loathsome to reference other games for detail in a review, it’s near impossible not to in the case of Assassin’s Creed Rogue. This is nothing more than a patchwork quilt of Black Flag‘s systems (right down to the interface and fonts) with other Assassin’s Creed ideas sprinkled in liberally. It plays like a greatest hits album of the franchise, and while some might welcome that, it’s difficult to heartily applaud the effort.

An argument could be made that outlining Rogue‘s gameplay would be best served be republishing an original Black Flag review. It’s nearly identical, after all. Heavy emphasis on sailing, counter-based combat, a lot of open sea naval combat, many small island or coastal locations to explore — it’s all there. Even most of the places feel eerily similar to those in Black Flag, just re-skinned with a bit of snow to suit the Northeastern setting.

When it isn’t copping Black Flag‘s style, Rogue‘s borrowing concepts from other Assassin’s Creed games before it. Remember the reparation project introduced in Assassin’s Creed II? Renovating various buildings around the three major locales is the means of earning passive income in Rogue. How about the task of liberating small Borgia-controlled areas in Brotherhood? That’s here too, as “gangs” occupy various sections of the world. They’re all present, like a family reunion made up of only the relatives that you don’t mind.

This isn’t inherently a bad thing, just uninspiring. Black Flag was an enjoyable title, one that reversed course from the often dull Assassin’s Creed III. But, would we heap praise upon Leonardo da Vinci if he painted a second Mona Lisa a year later but added a bush behind her? Rogue is derivative of the series’ past works to a discouraging extent, and that’s saying something given the culture of annual releases in the videogame industry.

The little that Rogue does to innovate mostly falls flat and is inconsequential. A bit more than a third of the way through, the player’s given access to a grenade launcher — a device that needs to be used exactly once, and that’s in the mission immediately following its introduction. The grenade launcher can be used to brute through some doors, but that’s probably ill-advised when compared to the more subtle approach of lockpicking — a feat that’s accomplished by simply holding down a button.

It’s really too bad because the juxtaposition between the thought put into the narrative and the effort put into the gameplay is glaringly obvious. The presentation of protagonist Shay Patrick Cormac is one of the best in Assassin’s Creed history, telling the tale of a man keenly aware and critical of his own actions, not just simply fighting for his side because it’s “his side.” Rogue‘s hook is that it’s the first game in the franchise to put the player in Templar robes (apart from a short stint in Assassin’s Creed III), and it can, at times, wonderfully drive home that there are two sides to any story. 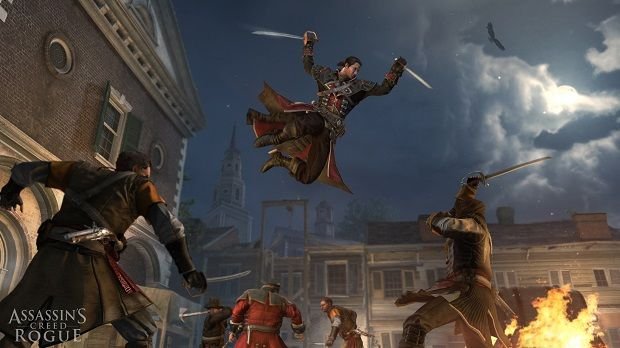 Shay leaves the Assassin brotherhood after embarking on a mission that went horribly awry and did untold destruction upon a city’s populace. Believing that his superiors knew this would happen, Shay turns his back and fights for a more noble cause — humanity. Finding that his interests align with those of the Templars, he joins their corner to prevent the Assassins from accomplishing their will and causing even more unnecessary death (an intention that’s starkly dissonant from his actions when he sticks his blade in hundreds of soldiers that had the audacity to live in a different country, but I digress).

What lends Shay such a sympathetic demeanor is that his story is properly established. It’s not until several hours into Rogue that the major event takes place that gives way to his betrayal. In the time leading up to that, the audience is given a glimpse at who Shay is. He’s more than just a killing machine. He’s playful at times, but professional when he needs to be. Always though, Shay’s a good-natured fellow, even if this means being too trusting of others.

When Shay eventually turns his back on the Assassins, it doesn’t at all feel like an unnatural transition from the shoes that Ubisoft’s had us walking in for the six previous installments. Rather, it gives pause; it lets us reflect. Maybe the Templars aren’t an entirely evil organization, and maybe the Assassins aren’t so altruistic with their ways. Maybe things aren’t as black and white as they’ve always seemed. There are certainly shades of grey, and Rogue expertly reminds us that that every story has another point of view.

Surprisingly, this is nowhere more apparent than in the modern setting. As in Black Flag, the out-of-Animus actions take place inside Abstergo Entertainment — a division of Templar-run Abstergo Industries and a cheeky meta nod at Ubisoft. The higher-ups are hellbent on extracting Shay’s memories because they want to shove his side-switch in the Assassin’s faces. Along the way, there’s plenty of lore to rediscover. 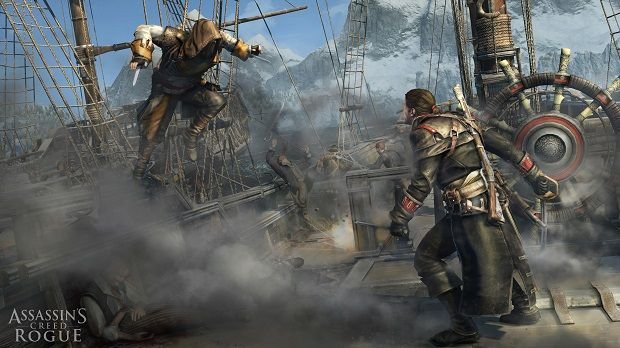 As menial tasks are prescribed, a wealth of information is made available to those willing to find it. By hacking — erm, “repairing” — computers through a never-changing mini-game, files are unlocked that profile notable Templars from past installments, painting them in a light that’s far more redeeming than what was learned through the eyes of the Assassins. The “Inspiration” videos are especially rewarding, but there are other interesting files that cover the past, present, and future of Abstergo and Templar involvement.

Hiding in one of these tablet entries is an aggressive wink at the root of the problem with Assassin’s Creed Rogue. “…While I want to recycle assets to save money, the experience has to be totally fresh,” reads an Abstergo note. Ubisoft’s push to release two Assassin’s Creed titles on the same day significantly hampered the potential of the last-gen release — a borderline travesty given all that the protagonist and narrative do to shake-up the tried and true approach.

Those who yearn for a return to Black Flag‘s sandbox will take comfort knowing this is “more of the same,” as the clichéd review expression goes. But, Rogue‘s systems do nothing to move Assassin’s Creed forward, leaving it fittingly stuck in the past like the last-generation consoles it graces. Anyone who expects more will be disappointed. Anyone who just wants another open-world adventure replete with sailing, exploration, and killing might find comfort in its familiar ways.

The reception to Assassin’s Creed Rogue‘s gameplay systems and mechanics will likely vary and mirror the sentiment that the game’s narrative and tonal direction pride itself upon. It’s all just a matter of perspective.