Saving the best for death

Assassin’s Creed has spent more than a decade flirting with post-release content concepts that are out-there enough to sell. There was an alternate timeline where George Washington was an evil tyrant. There was a whole add-on that revolved around first-person Animus platforming. We even got to murder as Jack the Ripper.

These are always novel. Assassin’s Creed has always been about twisting history to fit the whims of a video game’s story. These offshoot DLCs push that to an extreme, taking advantage of their tangential nature as carte blanche to try something wild. They usually work in an entertaining-but-forgettable way.

The latest one, The Curse of the Pharaohs, is the best yet. 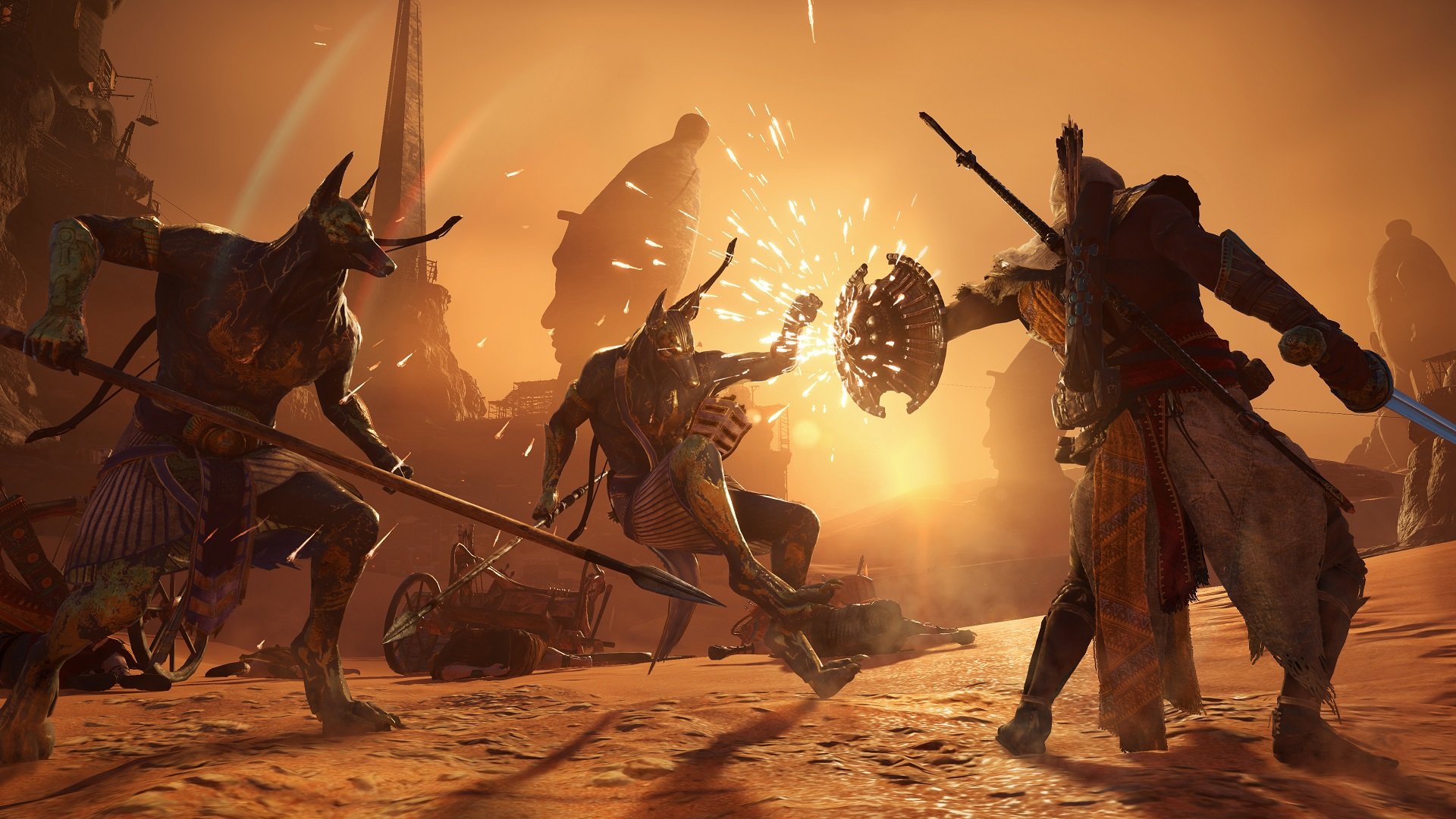 Assassin’s Creed Origins: The Curse of the Pharaohs stays true to the trend in that it doesn’t shy away from the outrageous. Set four years after Origins, Bayek travels to Thebes to recover an artifact (it belongs in a museum!) when he discovers the entire region is plagued by a curse. The opening seconds of the add-on force Bayek into a fight against some sort of apparition that’s freely slaughtering the townsfolk.

As it turns out, the spirits of deceased Egyptian pharaohs are mighty displeased that their tombs are being robbed. They’re coming back to the terrestrial realm to take it out on the mere mortals. Bayek takes it upon himself to return their missing treasures and to set the pharaohs straight once and for all.

These two tasks are the push and pull of Curse of the Pharaohs. Thebes and the surrounding four regions (all new territories for this add-on) are a lot like the Egypt from the base game and The Hidden Ones. It’s a lot of desert and rocks and swamps. Aside from a pair of impressive temples in Luxor and Karnak, this is a landscape we’ve seen before.

That influences the feeling of the missions in and around Thebes. The structure is largely the same as what we’ve become accustomed to. Meet some people, investigate some stuff, find some items, and maybe assassinate a few targets. It can feel like busywork given how many times Assassin’s Creed Origins has asked us to perform these exact same objectives in service of other storylines.

However, there’s a grand payoff at the end of the rainbow. Confronting each pharaoh requires going to the afterlife for a final battle. These new locales are where Curse of the Pharaohs makes its mark. Each afterlife is modeled in the spirit of the ruler who resides there. Nefertiti is in the calming field of reeds. Akhenaten can be found on a palatial island with the sun hanging very low in the sky. 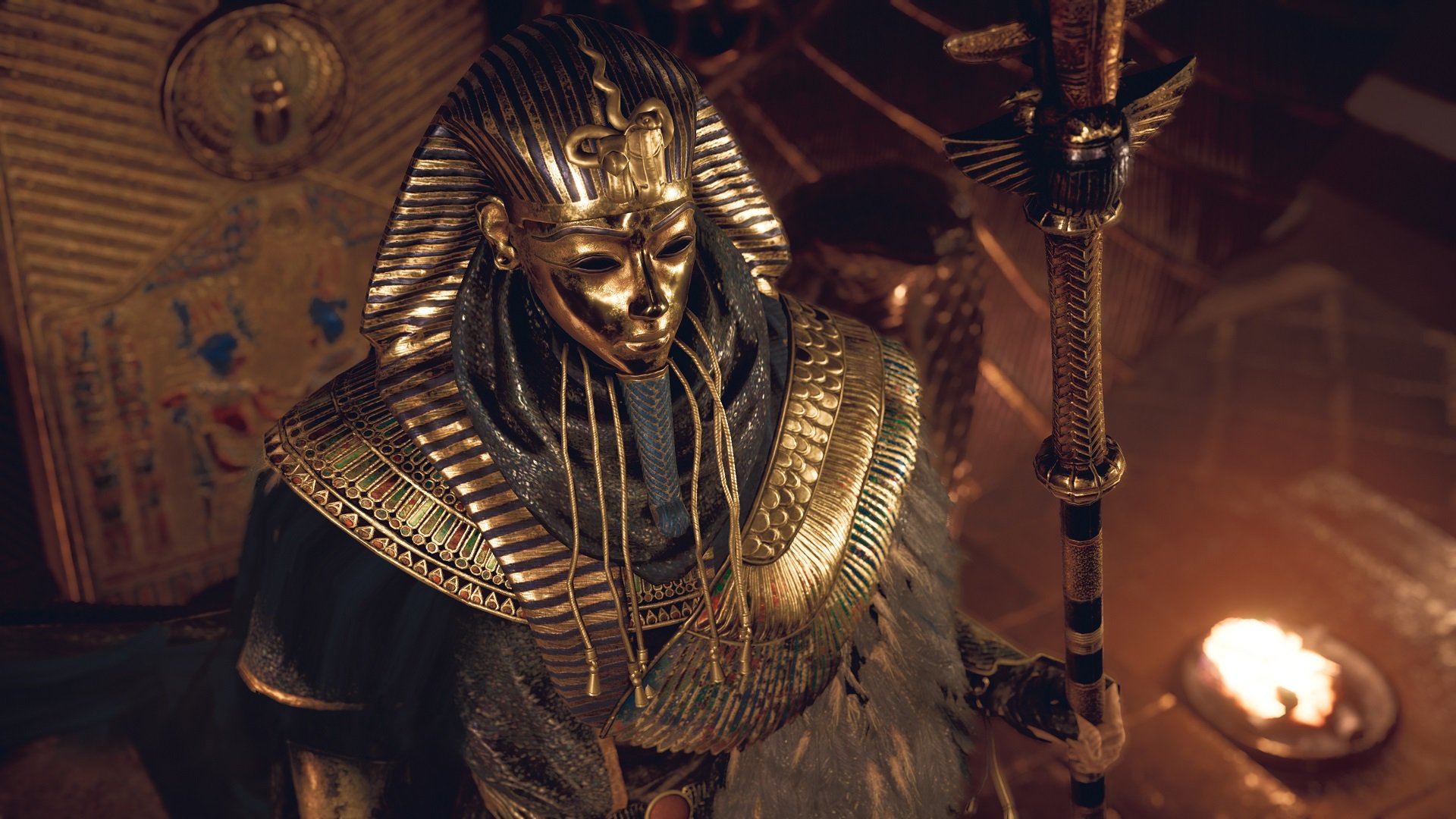 This is where this add-on gets to really commit to the idea of Egyptian mythology, and it makes good on the opportunity. Every afterlife setting is splendidly unique, but there are constants that tie them all together. The enemy guards are jackals instead of humans. Unsettling ba-birds (ostensibly birds with human heads) flock to most every edifice. Giant scorpions rove freely, acting as passive guardians of the land.

As a bit of housekeeping, Curse of the Pharaohs is post-game content as far as the story goes. That means all the enemies are significantly tough, as the level cap gets raised from 45 to 55. However, there’s the option to duplicate your existing Origins save and automatically boost it to level 45, so that you can play this DLC whenever you feel like it. (Although, I’m not sure if there are any drawbacks to this system because my save file was already at level 45.)

The Curse of the Pharaohs isn’t constantly entertaining. The real-world Egypt bits start to stretch thin toward the end of this 10-hour-plus add-on. But then Bayek’s transported back to the afterlife and everything’s tremendously entertaining again. It never grows so tiresome as to warrant giving up on the chance to see another artistic take on what’s beyond this mortal plane. That part is always superb.

This is Assassin’s Creed finally catching the dragon that it has been chasing for a decade. At long last, it has nailed the balance between outlandish and plausible. Because of the period’s close ties to mythology, it makes sense for Bayek to travel to the ethereal. It’s thematically consistent with the setting, and it’s a sincere reason to explore something new. The Curse of the Pharaohs is among the most ambitious of Assassin’s Creed add-ons while also among the least jarring. It’s quite possibly the best DLC to date. If this is Bayek’s swan song, he went out on a high note.

[This review is based on a retail copy of the add-on provided by the publisher.]