Ubisoft has a lot to prove with its “what if” story of an evil George Washington. The first episode wasn’t nearly as enthralling as Ubisoft had promised, mostly due to the fact that it felt like a lot was held back in favor of splitting it into three parts.

The second portion, titled The Betrayal, in some ways, is a step forward — a very, very small step forward, and a step back, that is. 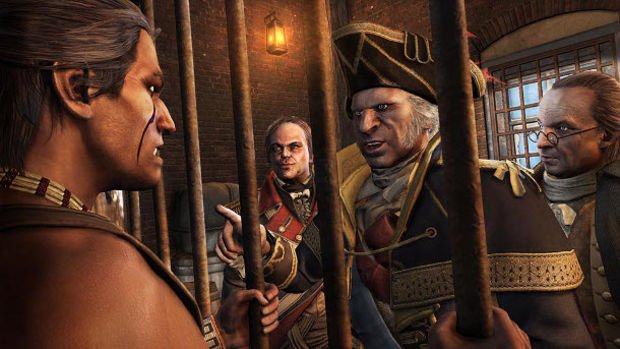 Minor spoilers involved for the first part of the King Washington DLC.

The last time we saw Connor in the “King” timeline, he was taken prisoner in Boston by the forces of King Washington, ready to be put to death after a brief stint in jail. Of course, this all powerful incarnation of Connor isn’t standing for it, as he calls on the power of the animals to overcome this minor setback.

Connor gains another gimmick this time around, in addition to his ability to cloak with the powers of the wolf from the first DLC — the power of the eagle. Essentially, Connor can aim at nearby perches and higher ground, and press the “Y/Triangle” button to fly to it. He can also hold Y/Triangle to utilize a flying kill. It’s all really easy to control, and fairly intuitive. I really enjoyed roaming the rooftops of Boston, as the power can be utilized pretty easily.

At first, it felt weird cloaking and flying in an Assassin’s Creed game. But since this is a side story, and the series itself isn’t really known for 100% realism, it wasn’t that hard to divorce myself from the core experience, and at this point, I kind of just went with it under the auspices of it being a side story. Once you get the third power in the next chapter, playing as Connor with three superpowers at his disposal has the potential to be incredibly entertaining, if the missions are balanced correctly.

As far as the missions themselves go, the first order of business in this DLC is to cloak yourself in your jail cell to trick the guard and escape. It immediately reminded me of some of the coolest parts of the Metal Gear Solid series, and I was hoping that we’d see more of these types of missions this time around.

Sadly, the answer was a resounding “no,” as the DLC basically followed a paint-by-numbers scheme the rest of the way. Not a bad scheme per se, as the missions were all serviceable, but still, not all that enthralling either.

Your journey will take you over part of Boston, as you strive to convince Ben Franklin to join your cause and betray the power-drunk George Washington. It paints Franklin in a rather demeaning light, which I wouldn’t really care about at all if it was done well. Instead, you’re introduced to a whiny, sniveling Franklin — a stark contrast to his reality presented in the core game, and not a particularly interesting incarnation of the forefather either.

Whereas Washington was all over the first DLC, he’s barely in this one, outside of laughing at you in a jail cell in the first few minutes, and making a brief appearance in a dream sequence that may or may not have actually happened.

You still don’t get any idea of how this falls into the normal Assassin’s Creed canon (as Ubisoft has stated), so in all likelihood you’ll have to wait for part three for that, too. Despite the fact that I had a bit of fun overall with the experience, I really wish it had something a bit more substantial on offer to warrant a recommendation for all but the hardiest of Assassin’s Creed III fans.

While I won’t spoil the ending of this episode, not a whole lot has really happened to move towards some grand finale — so unless the third DLC is literally twice as long as these roughly one, to one and a half hour affairs, I don’t see how it could result in anything poignant.

The power of the eagle is a bit more fun than the wolf, and in tandem, it can make for some pretty fun combinations of wacky high flying stealth maneuvers. But sadly, the environment you can actually use them in (in this case, Boston), isn’t really conducive to the full extent of your powers. I get that Ubisoft wants to tell a cohesive story through a more linear path, but giving you these formidable powers and not letting you run free with them feels wrong. 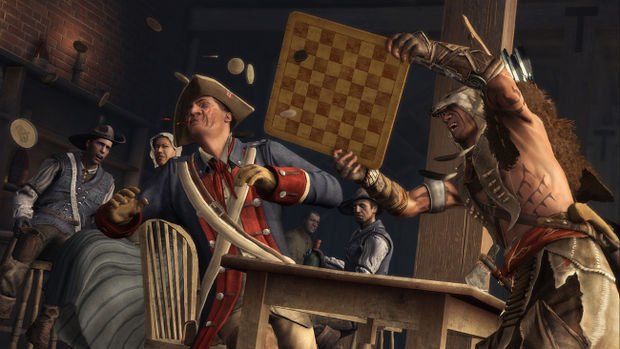 Due to the fact that the DLC takes place in a city with NPCs and not the wild frontier, there are more opportunities for glitches — and boy did I spot a few. I encountered a handful of NPCs who weren’t fully rendered, a few quest object glitches, and a number of graphical hiccups. If you recall, the core game also had a ton of issues, so it’s odd that Ubisoft hasn’t ironed out the engine for this high profile DLC pack.

There’s also one major flaw in the core story — the final mission. Without spoiling anything, you have to defend a group of people from at least three waves of 10 soldiers, and the experience is pretty grueling, in all the wrong ways. While I normally don’t mind a challenge, you’ll fail the mission if your AI brethren dies — which happens pretty easily given their propensity to suck.

It made for a pretty frustrating experience that ended up making my new-found animalistic powers feel a bit more tame. This section could use a ton of tweaking, but otherwise, I found the story and the missions involved extremely manageable.

The Betrayal tries to offer more variety than The Infamy did thanks to its high flying antics, but it never truly transcends those ideas on a base level. If it offered a full sandbox with ridiculous spirit powers, it could have made for a pretty amazing superhero sideshow.

Instead, the powers feel fairly limiting, as do the worlds they take place in; which feels like a wasted opportunity. Perhaps if the third part can bring the craziness up to 11, this “what if” story will pack a little more punch. Until then, you may want to hold off on going all in, or even partly in, at this point.