When the Chronicles series was announced, my response was mixed. I mean, it’s cool that we’re getting to see new settings outside of the usual suspect after all, but by that same token, I’d rather see those new areas in a fully-fledged 3D game.

These Prince of Persia inspired 2.5D gaidens (including last year’s China) are the next best thing though, albeit with some provisos. 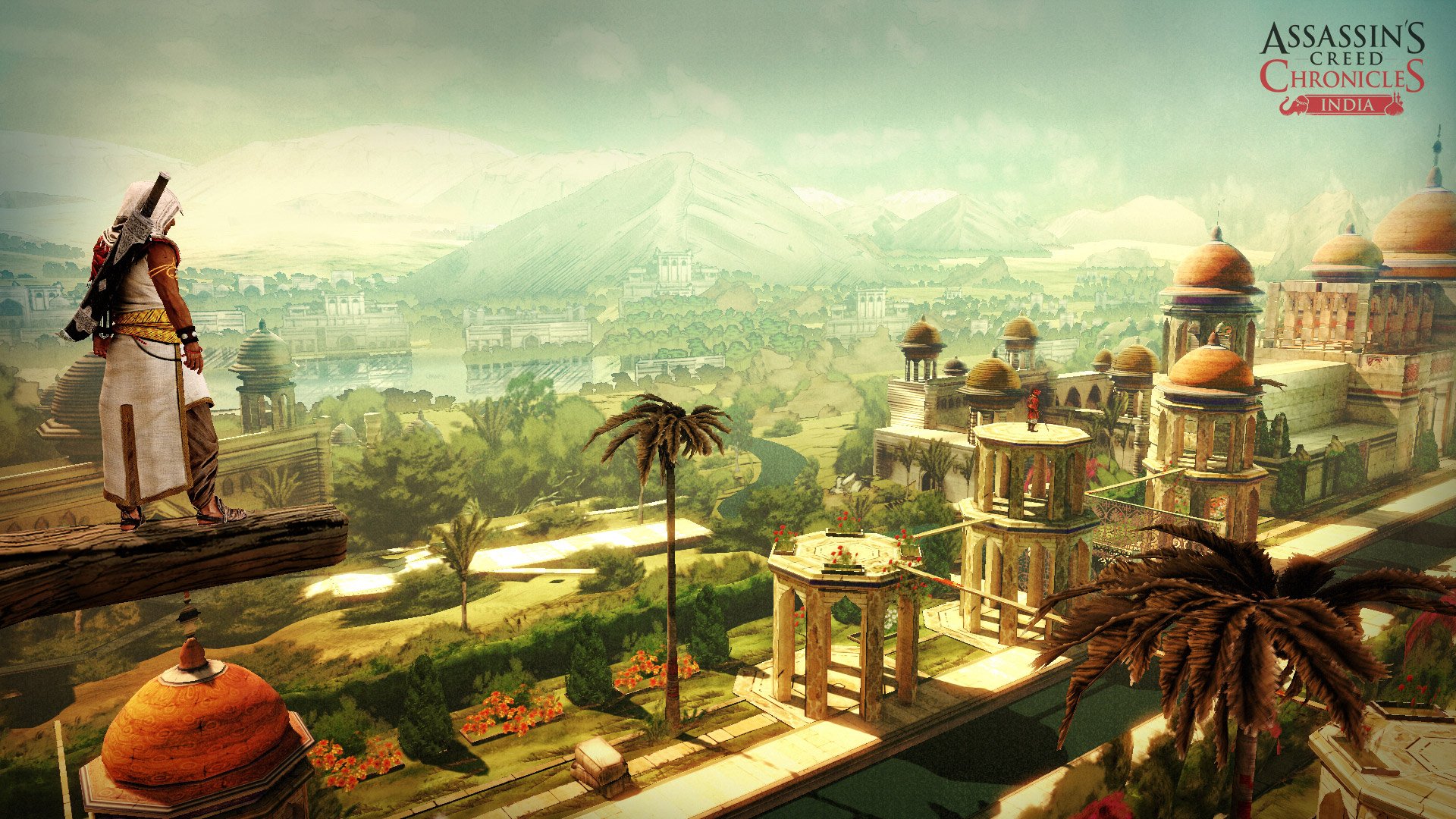 In this tale players will assume the role of Arbaaz Mir — a cocksure assassin who has just stolen the Koh-i-Noor diamond, a Piece of Eden. The year is 1841, and Arbaaz is caught up in your typical Assassin vs. Templar antics in the brand new setting of India. The narrative mostly takes a backseat, with various puzzles and combat (or rather, the option to avoid combat) challenges to face along the way, and little in the form of exposition or world building.

It’s…serviceable, much like China, in that the story doesn’t really leap out of the screen, but it also doesn’t get in the way. India keeps inline with China‘s unique visual style that looks like it could be housed in an art gallery, but with more vibrant hues and beautiful pastels than the last iteration. Often times I’d stop and ogle at the landscape, which is something I rarely do in recent 2D titles — but then again, Ubisoft usually nails it in that department (Rayman, Child of Light).

In case you’re wondering, it’s still following the same stealth platformer format from China, so don’t expect a whole lot. Levels are very linear in nature, even if specific sections do have a number of different solutions (like whistling to distract guards, going around them entirely with the grappling hook, and so on). Once again the actual platforming mechanics are sound, and the “stealth button/run button” format translates unusually well to the 2D plane. That smoothness starts to grate though once you’ve made your way through similar looking labyrinthine halls, fighting the same types of enemies over and over.

India still discourages combat and proclaims stealth king, which will probably polarize a few of you out there looking for constant fights. The game punishes you with a low health pool and a limited amount of combat tools, so if you are adverse to stealth you may want to sit out for this series. Personally I revel in the ability to not go in guns (or blades) blazing, so the style suit me quite well, especially with the increased emphasis on the grappling hook.

Once the story is all said and done there’s a New Game Plus, and a “New Game Plus Hard” option to storm through. Thankfully though Ubisoft added in another element to India in the form of challenge rooms, which are basically in the same surrealistic “VR” style as past entries, with time-based objectives to complete. Sure it’s the same old song and dance for Assassin’s Creed, but it’s nice to have something extra to do, even if there’s only six of them.

Assassin’s Creed Chronicles: India isn’t a whole lot different compared to China, which is either a good or a bad thing depending on your prior experience. It sports a slightly less interesting character and setting, but the core experience is replicated, and the addition of a few gameplay tweaks as well as the aforementioned challenge mode ensures that it’s on the level.