Okay, let’s get some things out of the way real quick regarding monetization:

No, it costs $20 and there is no free alternative.

Two complete decks, ten booster packs, and five tickets (used for playing competitive modes). This is more than a $20 value considering the booster packs alone would cost that much, and tickets also cost money.

Competitively, yes. However, you can play an unlimited amount in casual play without spending any extra money.

By buying them in boosters, buying them on the Steam Marketplace, or winning in competitive modes and being rewarded with booster packs.

The bottom line is there is plenty here to keep you busy without spending any extra money unless you’re very interested in building your own decks and playing with them. If you have other questions about the basics, it’s probably answered in the cleverly-named ArtiFAQ. 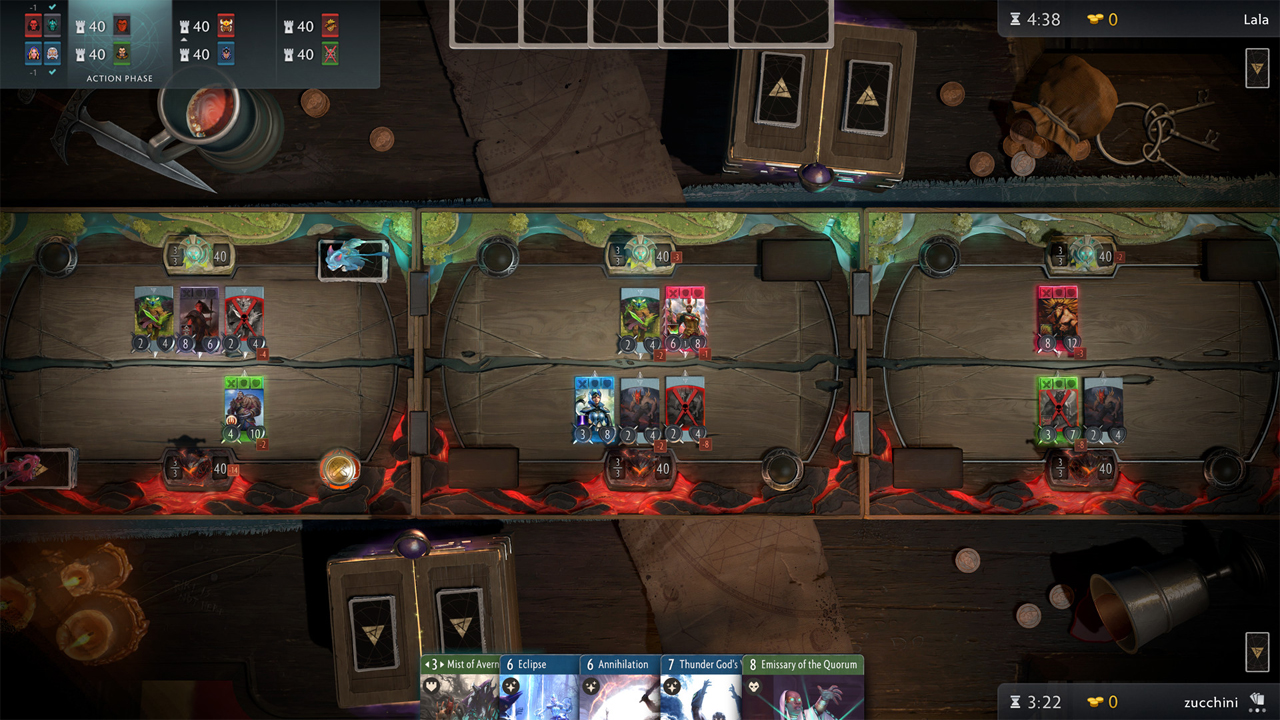 Artifact is a Dota 2-themed card game, though knowing the ins and outs of Dota 2 is not required to enjoy it. For those who do know Dota, there are plenty of the same abilities and items that work as expected. By and large, abilities and items are simple enough for any player to understand, and anything that seems confusing can be hovered over to display a quick explanation. Valve has done a lot to help new players in this regard, though the tutorial could use some work.

Since Artifact takes place over three “lanes,” each acting as their own board, there is a lot to take in all at once. The tutorial does a good job explaining the basics of the game, though I ended up having a handful of unanswered questions after playing a few rounds. Luckily, the internet had the same questions and I found the answers just by Googling them. Still, it’s strange to leave things like how heroes are placed and what those strange arrows are that show up each round and disappear. As for answers, heroes are placed randomly and the arrows are also randomly decided to indicate where cards will attack this round.

Each deck contains a total of 40 cards, featuring five heroes, at least nine items, and an assortment of non-item cards. Each hero is associated with a color, either red, green, blue, or black. Colors have their own strategies, too. Red is strong and aggressive early on, green relies on buffs and support, blue does its best to control the board, and black does a great job of killing units and building an economy.

Here’s the problem: I’m red/green colorblind. I have a very difficult time telling these cards apart which causes a lot of issues. I will never play a red/green deck because it would just lead to frustration, and I heavily lean towards blue and black decks. Drafting cards can get risky since I’m not always confident the card I’m picking is a green or red card. Considering Dota 2 has an amazing colorblind mode, one that I provided feedback on to CyborgMatt, I can only hope that something similar will happen here. Valve, reach out to me again! I’m happy to help.

After choosing or creating a deck, players battle it out over three lanes to destroy either two towers or the enemy’s ancient. Each lane has a single tower with 40 health. Towers can take damage from unblocked heroes and creeps or a variety of spells. If a tower loses all of its health, it is replaced by the ancient, which has 80 health. The ancient can only take damage from that lane. This leaves players with a lot of interesting decisions over the course of a game. Which lanes do you spend resources to defend or attack? What’s the most efficient way to win without sacrificing too much? The options for win condition add a brilliant layer of strategy that may even fluctuate mid-match.

Players take turn using mana (which increases each round) to play creeps or cast spells. Once a player is done, they pass their turn to their opponent. When both players pass without doing anything, the cards clash and the damage is done. Artifact does a great job of explaining exactly what will happen when the cards clash, giving clear indicators of incoming damage. Even passing turns has its own mind games — passing a turn without playing something can lead the opponent to believe they have the upper hand, leading them to play some “gotcha!” cards only to have it blow up in their face hahahaha!

Games tend to last anywhere between 15 and 30 minutes, which can definitely be draining. It’s rare that I end a game and feel like luck played a large role. Sure, it’s a part of any card game, but Artifact does not lean heavily into the randomness, with a few cards as exceptions. There have been times where I was in awe of a combination that my opponent used and could do nothing but clap in response. Just like in Dota 2, the potential for game-changing plays is big, and they are downright exciting regardless of which end of it you’re on. 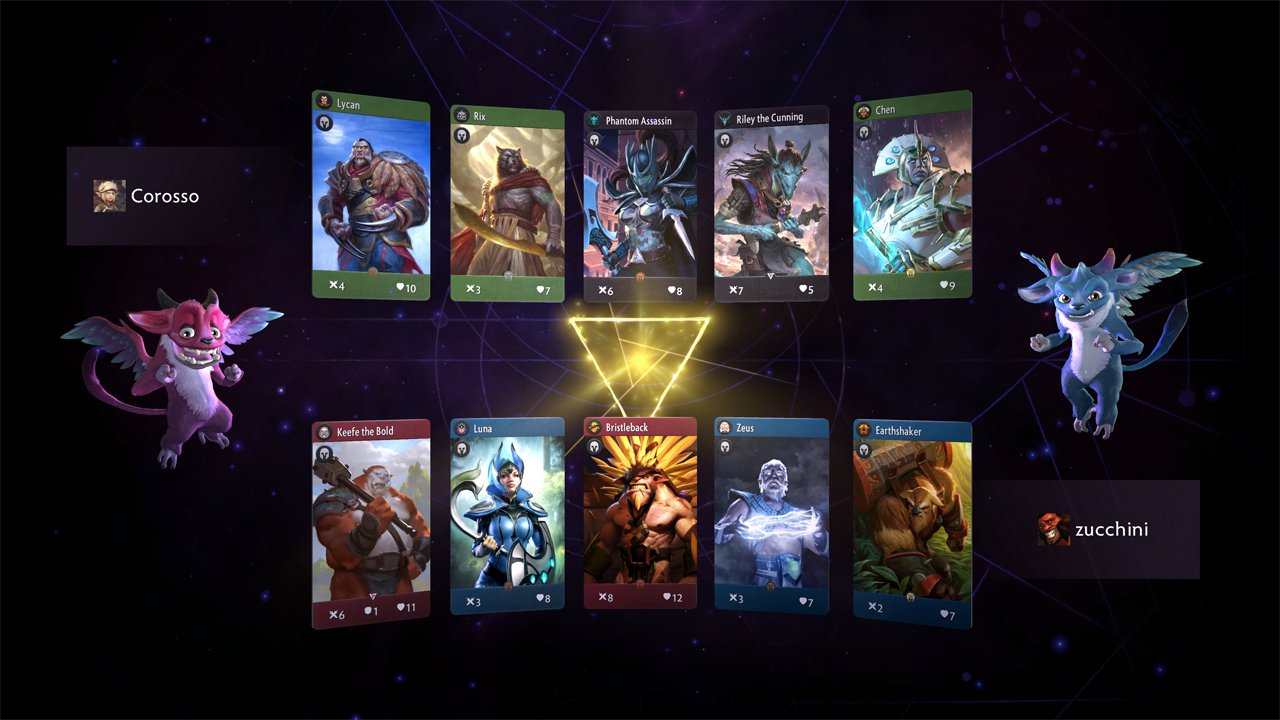 There are two modes, both of which can be played casually (for free) and competitively (for not-free). Constructed allows players to bring in pre-created decks and challenge opponents. Phantom Draft displayed a series of random cards that players choose from, two at a time, until they have a large pool of cards. At that point, they pick which cards enter their deck and begin playing others. The goal in both modes is  to win five games before losing two; losing twice ends the run for that deck. In casual modes, there are no rewards other than personal experience and lessons learned. In competitive modes, winning more than twice before losing twice earns rewards. Three wins get your ticket (entry fee) back, and four and five wins award booster packs and a ticket.

My preference is casual play. When real shit is on the line, I get incredibly anxious and don’t enjoy my time spent playing. Maybe one day I’ll build up enough confidence to play competitive more, but for now, I’m sticking to casual play. Casual Constructed is a bit of a roadblock with a monetary investment, so playing Phantom Draft is likely where most players will spend their time, and it’s a blast. The random element encourages experimentation and thinking on the fly while drafting, and the end result is some random and weird decks.

Playing Constructed will require a decent cash investment. If Constructed is your bag and money isn’t, this isn’t the game for you. Packs are $2 each and contain 12 cards, guaranteeing one of each of the three rarities and a hero. It is also important to keep in mind that cards can be sold on the Steam Marketplace. This is currently an unknown factor, but it does mean that if you want a specific card, you can buy that card. The market has to stabilize to see what kind of prices we’re dealing with here, so I can’t comment on whether or not it’s affordable. 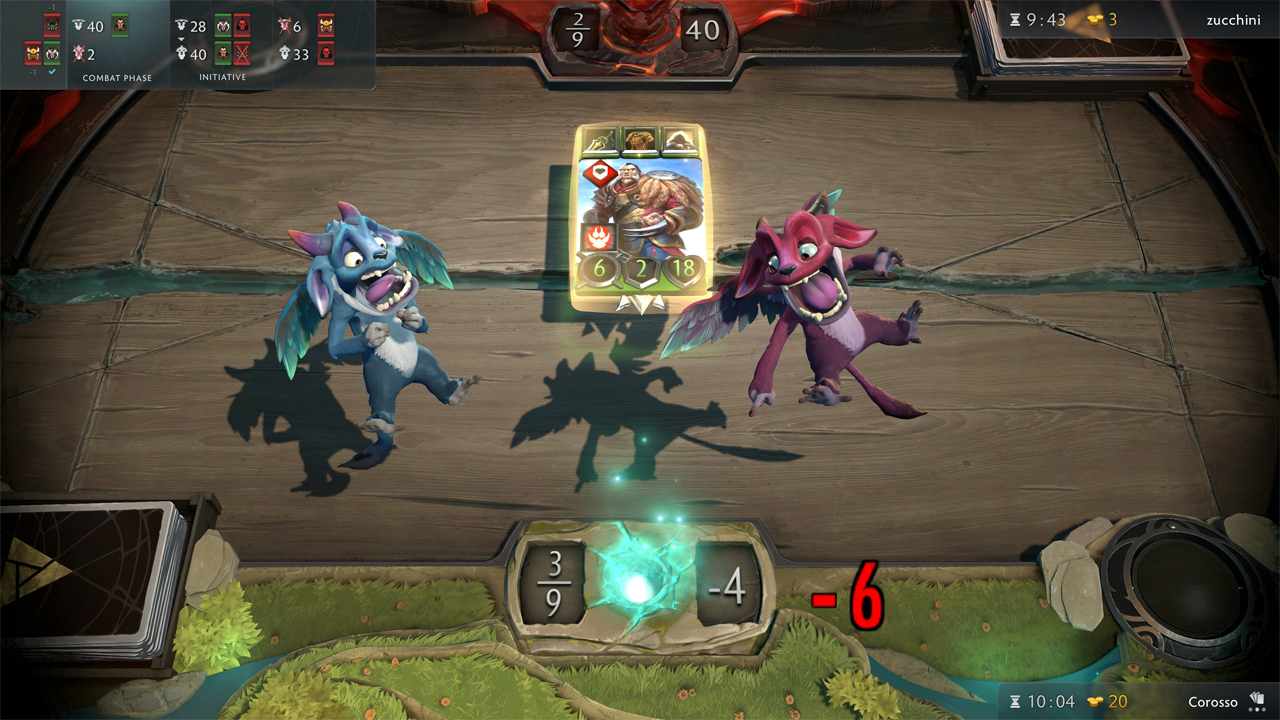 Personally, and I’m sure I’m rather alone on this, I simply enjoy experience the in-game economy as it evolves. I have made decent money from both Team Fortress 2 and Dota 2 by simply playing the market and I hope to do the same here. I know I’m in the minority with this and most people will despise doing anything related to the market, but I wanted to make it clear.

I do wish there was some sort of real progression system outside of a hidden matchmaking ranking (MMR). Plenty of community members have clamored for a ladder or visible ranking system, and Valve has responded that they are working on it. Given that Artifact has had many new features added in the past few weeks due to community interest, I’d say that it’s a safe bet they will deliver on this front as well.

One of the recent changes was to bring back an older feature that disappeared before the recent beta period — the Deck Tracker. This allows players to see their deck and their opponent’s deck. Like, all of it; what’s played and what’s not played. I get the reason people want it, but the element of surprise is something I cherish in games like this so it’s a bit of a bummer that the opponent can discern my strategy from the get-go. Again, I get why it’s there, but on a personal level, I wish it wasn’t. 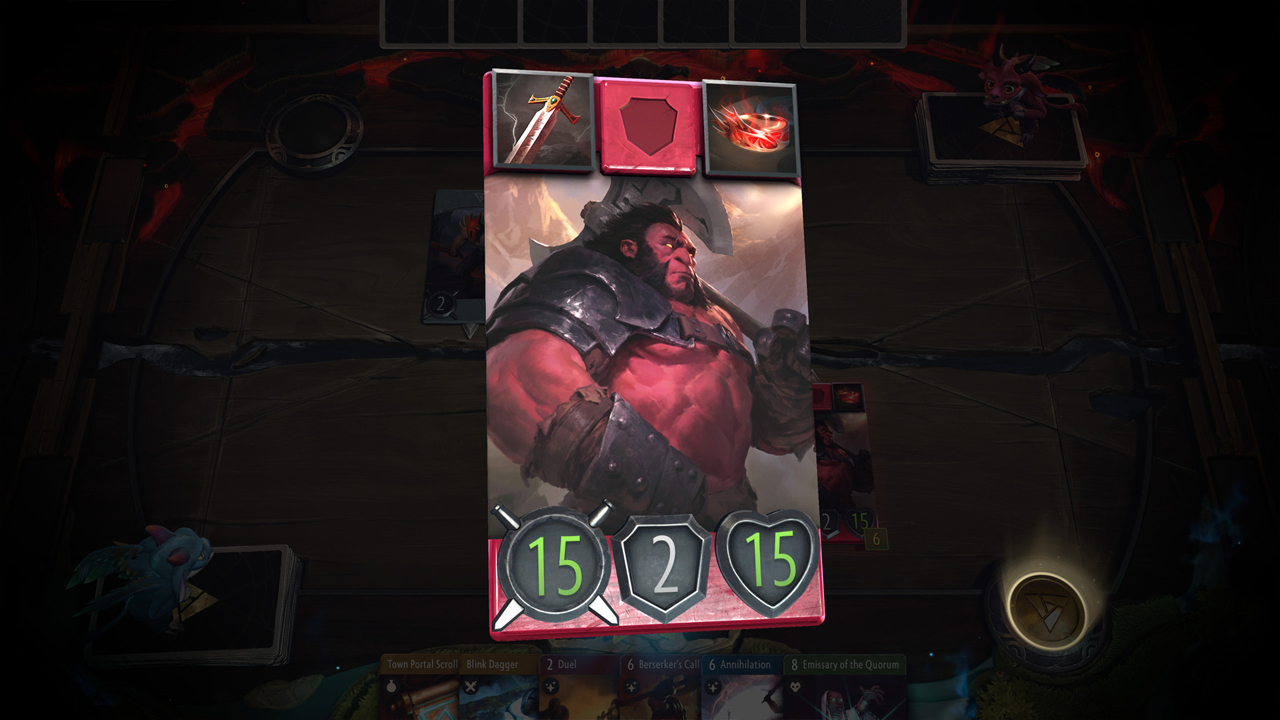 I’d be remiss not to mention the absolutely beautiful artwork on the cards themselves. Valve even lists the artist for each card, which is great. Honestly one of my biggest complaints is that I can’t make the artwork bigger to admire it even more. Each card also has voice acting, as weird as that is to write. There is a ton of lore here and cards will play specific voice lines when certain conditions are met, or when packs are opened. And boy, some of these voice lines are long! It is also possible to simply read through them and re-play any voice lines when viewing the card itself in the Collection tab. Hell, even the music is fantastic and appropriately epic at all times. The main menu music is constantly in my head!

Artifact is not for everyone. It isn’t for people who are red/green colorblind, for one. It isn’t for the die-hard deck builders who would rather grind games than pay cash. But it is for people who enjoy card games with an incredible set of fair and unique mechanics that reward out-playing your opponent over luck and randomness. And while it may be based on Dota 2, with a lot to love for its fans, knowledge of the Heroes or universe is in no way needed to enjoy Artifact. All you’ll need is $20 and an open and creative mind.