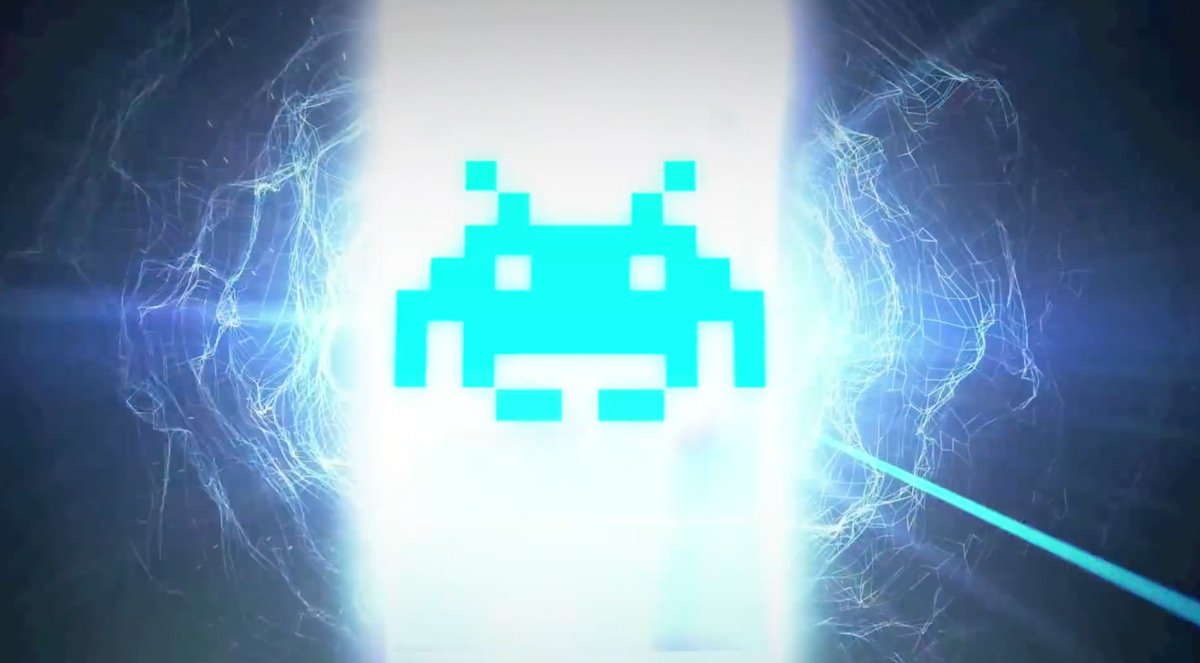 Arkanoid vs. Space Invaders has slowly taken over my life. Jordan first brought it to my attention last week, and today I play it everywhere I go. I play it on the bus, I play it on the train, I play it at my desk when I’m sure nobody is looking, and I play it late at night, robbing my body of the necessary hours of sleep it needs to properly function.

You might say I’m addicted and I would not disagree with that. I’m a junky, and if I write this review correctly, you too will be jonesing for a hit by the end of it. 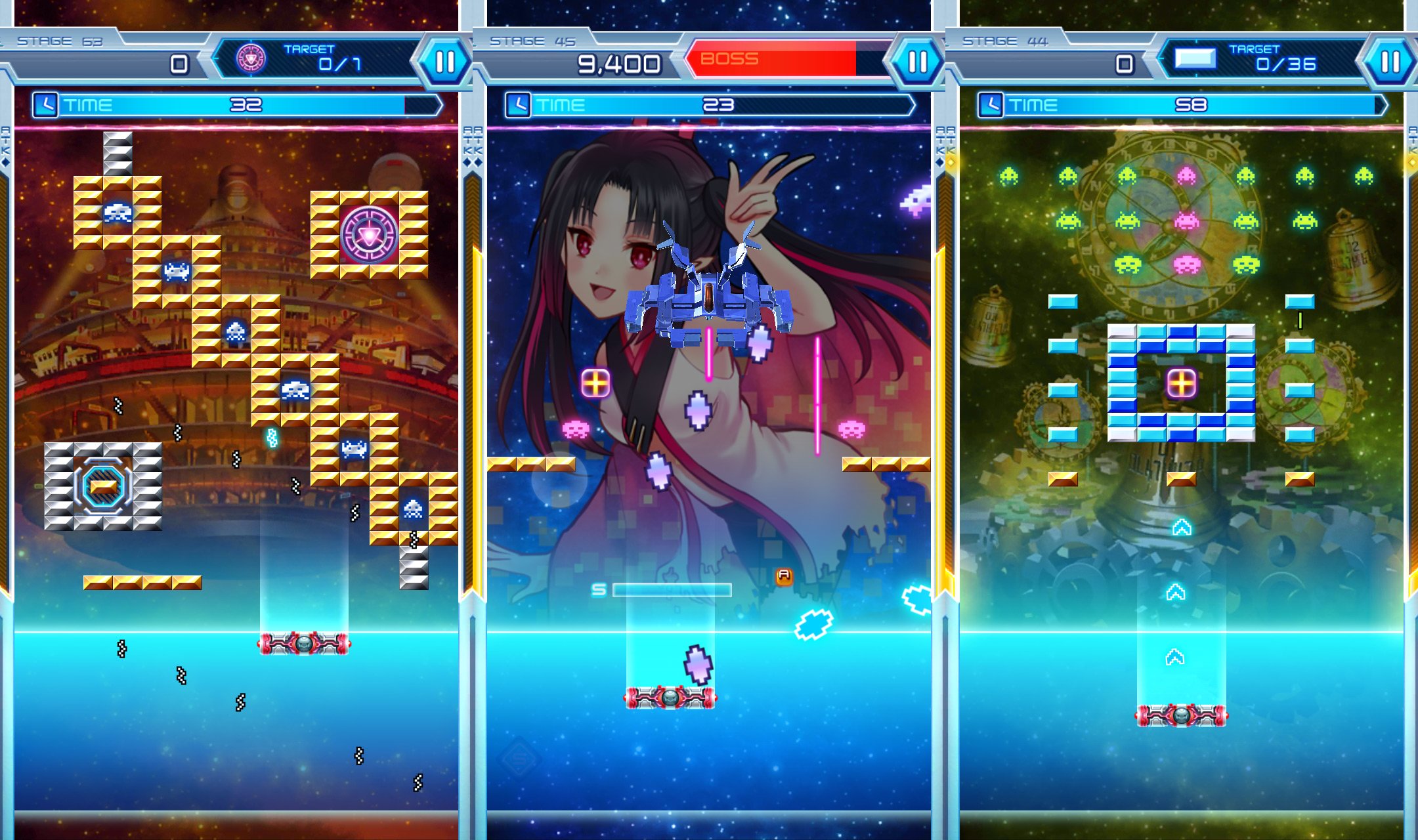 Arkanoid vs. Space Invaders could have been a free-to-play game. It could have followed the lead of most other mobile developers and loaded itself with counters, microtransactions, ads, and 10 different types of currency to keep track of. The format is ripe with opportunities to drain people of their money. Perhaps in some alternate universe, that is the way the game was released and an alternate version of me is lamenting the fact those mechanics rob it of greatness. But I don’t live in that universe. I live the correct one, the one where Taito and Square Enix wisely choose to make this a premium game, cementing it as one of the best mobile games of the year.

There is a story to Arkanoid vs. Space Invaders but I choose to ignore it. I listen to the dialog that takes itself far too seriously as the writers aim for epic space opera when “Pigs in Space” would be a more appropriate tone. This is a game where I control a ship called a Vaus that just happens to look like a paddle, fighting against silly-looking Space Invaders. Rendezvous with Rama this is not.

But I’m not playing for the story and neither should you. I play for the sweet mash-up of two iconic arcade classics. From the very first level, Arkanoid vs. Space Invaders clicks with me. The controls are intuitive. I drag my finger across the generously thick field of play at the bottom of the screen to move my Vaus. Space Invaders shoot down, and I do my best to reflect their shots back at them. Different types of shots volley off my paddle at different angles, bouncing off the walls and hopefully hitting their target. I am able to create a direct shot straight up if I quickly push my finger forward before the moment of impact. This is a skill that pulls me out of jam after jam but can also be completely ineffective depending on the level.

As I destroy bricks and Space Invaders, various rewards drop down. If I can grab them with my paddle, I’m rewarded with extra time, a special power-up of my chosen assist character, or more fill for my special attack meter. Each level is entirely bite-sized, lasting less than a minute in most cases. Because it’s impossible to die, the timer is really the only enemy and I have fallen to its hands more times than I’d like to count. Finding a challenge is not a problem as the difficulty ramps up pretty darn quickly.

The developers use the bricks and Invaders to create devious challenges, forcing me to create a strategy on the fly lest the clock end my life. Most take one hit to eliminate, but silver-colored enemies and obstacles need a few hits to destroy while gold ones either cannot be destroyed or can only be taken out after I have hit a switch. Hitting these switches can be a crapshoot when I just rely on the reflected shots, but the special attack provides more accuracy. This transforms the Vaus into a bow and arrow, slows down time, and allows me to aim my shot as I see fit.

I love the challenge found here and objectives in each level can vary. There are so many little mechanics to learn — including the importance of reflecting as many shots back as I can without missing — that I have become completely enthralled with strategy. This, even though I fully know 50% of my success in it is pure luck. The luck of getting a bounce just right as I fling my Vaus across the screen. The luck of my special attack shot getting the perfect rebound that sends it directly into the enemy. The luck of getting a special attack at the last second, giving me something of an extended chance to beat the level. Luck plays a part, but as I learn the game I realize how much skill there is in it as well. 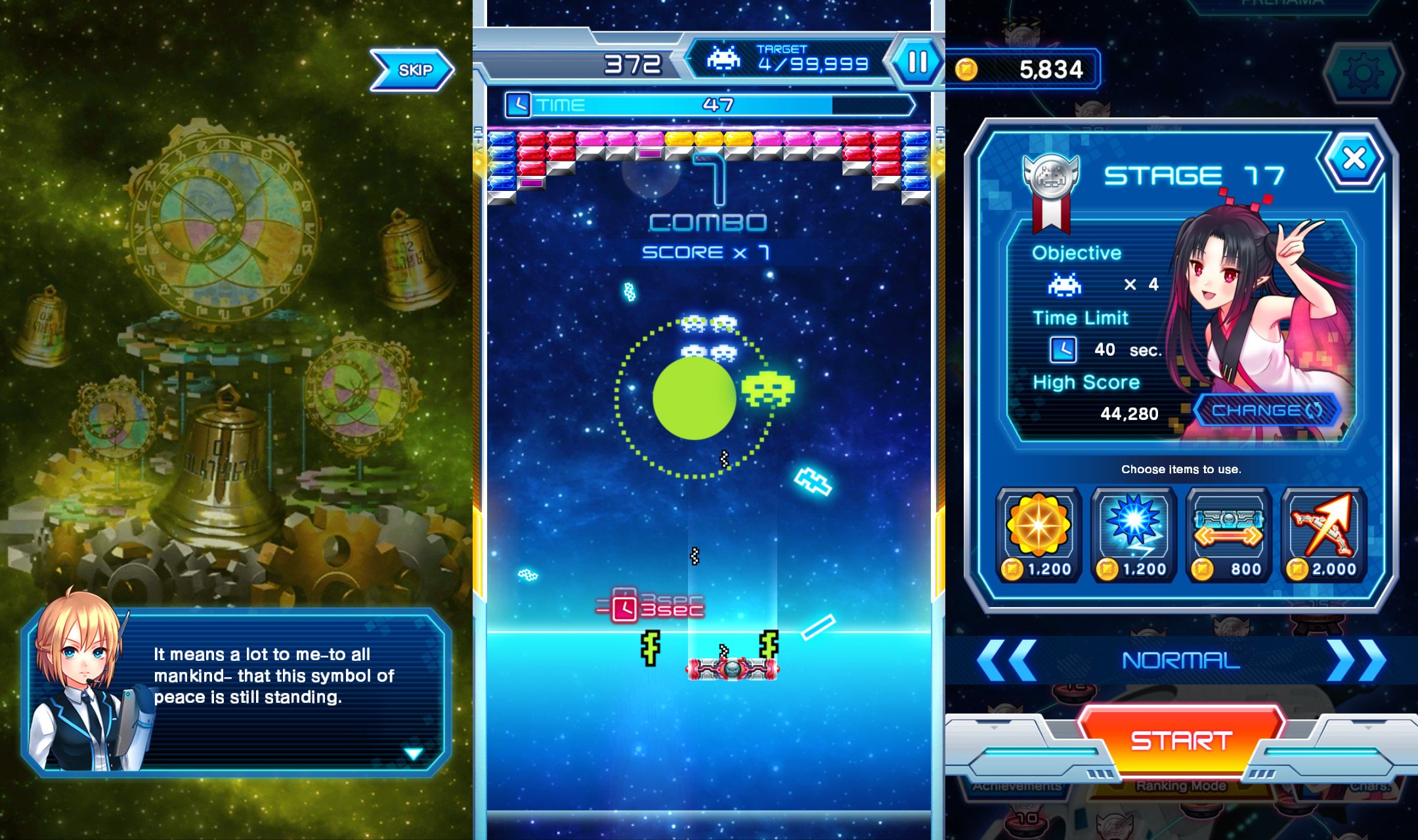 With 150 levels to beat, achievements to get, and support characters from Taito’s history to unlock, there is a lot of game here. Completing a world — which is made up of 14 levels and a boss battle — unlocks a hard mode that ramps up the difficulty of each level even more. Speaking of boss battles, while entertaining, they are not nearly the challenge regular levels can be. In fact, they’re the only point of disappointment I can find, and really only a slight disappointment if I’m totally honest. There is also an arcade-like Ranking Mode with online leaderboards.

I am noticing bouts of slowdown, though I am not sure if that is the fault of the game or my mid-tier mobile phone. Load screens are a bit longer than they should be and on my LG, there are moments where dragging the Vaus to the bottom of the screen will bring up my phone controls. Those moments are few and far in between though and hopefully something that can be fixed in an update.

There is just so much game here to enjoy and with no ads, no microtransactions, and no need to always be connected to the internet, Arkanoid vs. Space Invaders is missing most of the red flags people wave when dismissing the mobile marketplace. It isn’t the best version of Space Invaders out there (this is) but it is the best version of Arkanoid currently available and one that is well worth the four bucks I spent to get it.