When this past generation began, fighting games seemed to be on their last legs. Capcom fighters were nowhere in sight, Sega’s Virtua Fighter laid hidden in the deepest of digital fight clubs, and Namco’s Tekken and SoulCalibur began to wane after a few uninspired sequels. But to the hardcore, fighting games never went away; their devotion kept the once booming genre alive — even if it had been relegated to a “niche” category.

Then Street Fighter IV happened. Like an injection of Red Bull straight into the vein, the genre got its renaissance. Doors were opened and more and more fighters saw, not just daylight, but also success. The power of the Xbox 360 and PS3 brought more realistic and jaw-dropping 3D models, and increased memory gave us high-definition 2D sprites that rivaled the quality of hand-drawn animation.

The advent of live streaming has additionally kept the viability of the genre flowing, especially in the wake of EVOs recent tidal wave of popularity growth, and in the public eye for the foreseeable future. Additional platforms, like XBLA, PSN, and Steam, also afford us more venues for fighting games to come out on. Pair that with the closing of this current generation, and a few titles that would normally not see the light of day are beginning to radiate through the cracks. 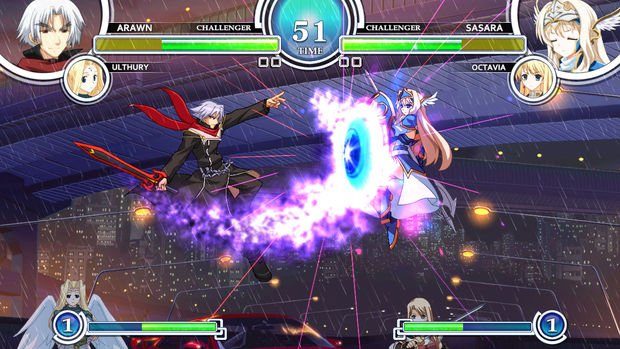 AquaPazza: Aqua Plus Dream Match is just one of a few recent “niche” fighters to cast its heavenly glow on this side of the Pacific. Released in Japanese arcades in 2011, this Examu (makers of the Arcana Heart series) fighter emanates much of the charm and technical skill that give fighting games cult followings. It has a pretty obscure set of characters from games you’ve most likely never heard of (anime fans may recognize a few), but the majority lend themselves well to the typical setting of a fighting game.

Which is a good thing, as a twenty-six character roster — though only half are fully playable with the remainder acting as support characters — taking center stage in this “dream match.” You may have had to be on some heavy hallucinogenics to conjure up the cross-over, but the result is a deep fighter that offers a smidgen of fan service, and a ton of just plain service to fans of its source material and fighting games in general — something you’ll notice as soon as you hit the character select screen.

Big, beautiful, slightly-animated portraits fill the screen, giving a grander sense to each character, though it’s brought down by awkward slowdown when you first enter the menu making it cumbersome to move quickly from fighter to fighter. Thankfully, it’s a minor gripe with only 13 fighters to choose from at a time, and the slowdown is generally absent on subsequent visits to the menu.

Aside from this minor nuisance, the remainder of AquaPazza is pure beauty. Exquisitely hand-drawn 2D sprites gives each character a picturesque anime quality. Unfortunately their walking animations lack the fluidity to truly pull off the vibe, but it’s not something you’re likely to notice during a heated battle. The true showstopper in the visual department are the game’s level-three super attacks, known as Splash Arts, proving to be quite spectacular no matter how many times you witness them.

Akin to Ultra’s in Street Fighter IV, each Splash Art is typically an outlandish combo-fest (my favorite goes to, Konomi, whose dog comes crashing in when it breaks free from its leash) that culminates with a stunning full-screen character animation to deliver the decisive blow.

Backgrounds, for the most part, are fun, brightly colored, and full of life. From duking it out in front of lush cherry blossom trees to the confines of an anime convention exhibit floor, each of the game’s 13 stages contains its own unique showpiece. One of the more memorable ones takes place at center stage at an ongoing J-pop concert, which is pure brilliance as two idols sing in front of a live audience, with a fully-animated video running on the center screen, as the fight is echoed onto the two side screens. 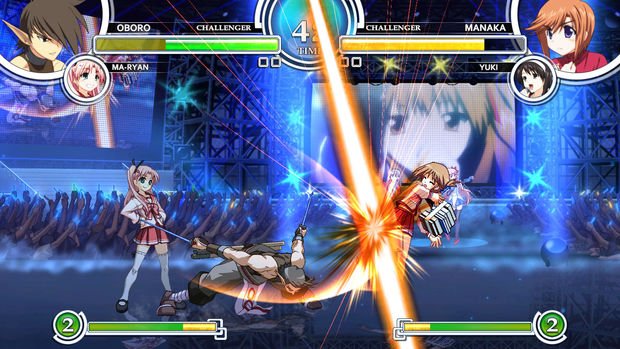 Features-wise, AquaPazza has everything you’d expect. There are two story modes (the second requiring individual completion with each character to unlock), Score Attack, Training, and the obligatory versus and online modes. Training mode is severely lacking, as it does a horrible job explaining the game’s systems to newcomers, and the digital version of the game that I was playing didn’t even come with an instruction manual (perhaps the retail version’s is of some help?).

Basically the AES works by rewarding aggressive players and punishing those who turtle with stat boosts and penalties. When under high emotion from taking initiative and/or executing Impact Guards, players receive a 10 percent — up to 15 percent when more than half your life is depleted — damage output boost. Low emotion, from passive play, lowers defense by 30 percent and increases the likelihood of guard breaks. 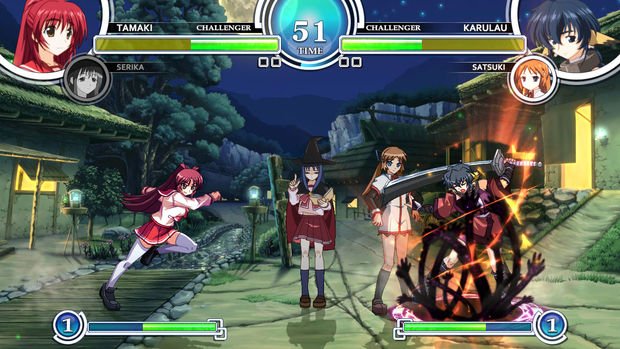 These are important things to know in order to get the most out of AquaPazza. Examu has built a fighter that serves up tournament-quality balance with a wide range of characters both aesthetically and technically, which explains why it’s been featured in Japan’s equivalent to EVO, Tougeki: Super Battle Opera the last two years. There’s the usual archetypes: grapplers, rush-down fighters, and ranged-based projectile tossers, but there’s some straight-out-of-left-field fighters that offer up originality.

For example Morgan is an archer who only has 20 arrows to use per round. Her arrows also have the ability to affect an opponent’s status by either stunning, poisoning, or briefly locking their special moves up. Additionally, every fighter can be paired with any one of the 13 partner characters. They work similarly to the assist attacks found in the Marvel vs. Capcom series by offering a few simple attacks that, when executed correctly, help string together impressive combos that can deal out some spectacular damage.

Controls are tight and highly responsive (unless you’re stuck with the PS3’s directional pad.) While the game is set up perfectly for the PS3’s controller, using four buttons (three attacks varying in power and one to call out your partner), be ready for some callouses unless you have a thumb made of steel. Some of the more complex super moves, especially the special attacks initiated from the air, really demand the precision that only a dedicated fighting stick or pad can offer. 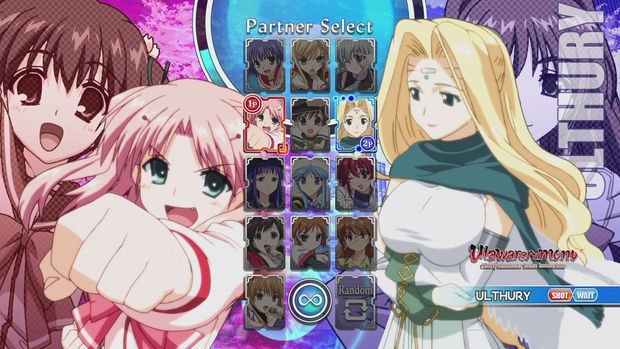 You’ll get a fairly basic understanding of how each fighter differs running through the game’s story modes. Both stories have their own specific arc, and are fully voiced in Japanese (no dubs here), but while character’s have individual story lines which alter slightly based on your assist partner, the main plot point is identical. But really, who gets that invested in the nonsensical diatribe that fills crossover titles? Just know it’s something about a forbidden potion known as the AquaPazza and a bunch of character’s have been thrust into a world because of it.

My only complaint about the game’s main story mode is the lack of a real final boss. What you get instead is merely a more powerful version of one of the game’s main characters who’s partnered up with an extremely annoying Ma-Ryan. Word to the wise; if you see Tamaki (the grappler) on the other side, just reset. I’ve generally had no problems running the gambit in story mode, but fighting a buffed-up, already extremely powerful grappler, is just plain cruel — and nearly cost me a controller.

Online is the bread and butter for those with a competitive edge and no one nearby to beat on. The game supports both ranked and player matches, with the standard features expected. Player matches allow up to six-person lobbies and includes a spectator mode. Ranked matches offer the ability to save replays of fights afterwards for either basking in or to learn from the beat-down you just took. I’m not sure what infrastructure the gaming is using online, but regardless it did a great job finding the best connections constantly, providing a smooth experience with no noticeable lag. 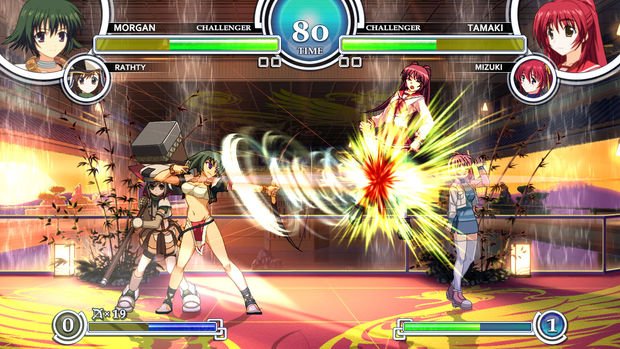 Oh, and let’s not also forget the sweet budget price. Now if only Atlus (or another gracious localization house) would pick up some of the games AquaPazza’s cast is most famous for. Tears to Tiara 2 anyone?