Those who drop together, become champions together

Since the battle royale sub-genre broke into the mainstream with PUBG, many studios have attempted their own take on it, from borrowing elements such as crafting and building mechanics straight out of survival games to just simply copying PUBG and hoping for the best.

By this point, many of those games have come and gone, all while active and dedicated communities have grown around the best of what this sub-genre has to offer. However, in only a matter of days (and completely out of the blue), Respawn Entertainment rocked the landscape of battle royale with a new challenger that has the potential for something truly special. 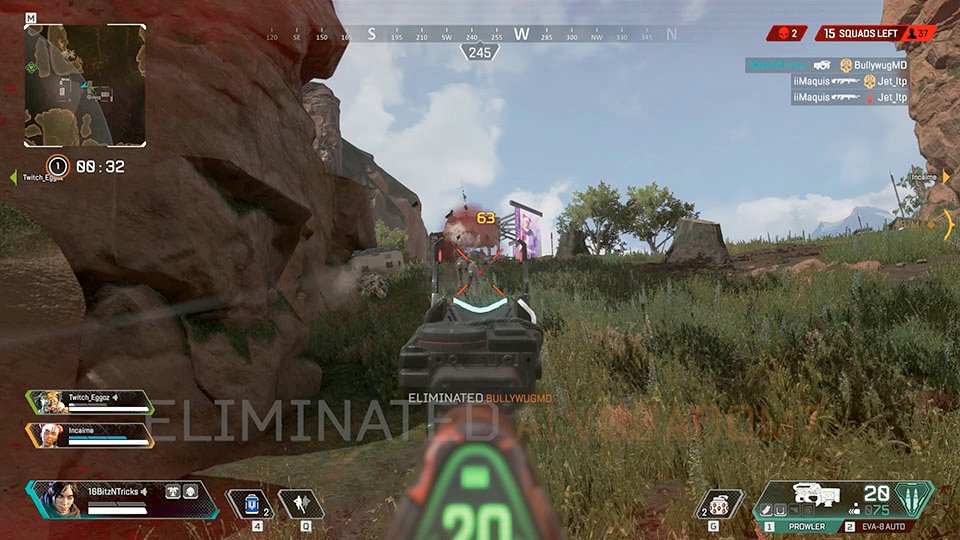 Mechanically, Apex Legends isn’t necessarily all that original. Much like many other takes on the battle royale genre, it borrows from the best on offer while also refining things and adding intuitive mechanics. However, Apex spices things up further with a unique cast of heroes known as “legends” that include a variety of abilities. It’s in this hero shooter approach to battle royale and its squad-focused gameplay that it truly separates itself from its peers.

Apex matches consist of sixty players, divided into three-person squads. Once loaded into a match, each squad member is randomly ordered and chooses a legend. Squads, however, can’t use multiple of the same legend. So, if you do favor a particular legend and it’s already been picked, you’ll have no choice but to select another one. There can be some obvious frustration in those moments, but at the same time, I do think it encourages experimentation.

In my time with Apex, I managed to squeeze in numerous matches with every legend on the roster, whether I’m bamboozling enemies with holograms as Mirage or slipping in and out of reality itself with Wraith. Every legend has a notable use or function within a squad and experimenting with a variety of squad selections tended to always result in an interesting combination of abilities that could potentially change up strategies from match-to-match.

It’s the little things, like throwing a shield over Lifeline as Gibraltar while she picks up another teammate, to more interesting combinations such as throwing down a smoke grenade with Bangalore while Bloodhound uses their tactical abilities to reveal enemies (while still concealed in the smoke). If I have any complaints so far, it’s that they’ve locked out two of the characters behind an unnecessary grind and paywall. 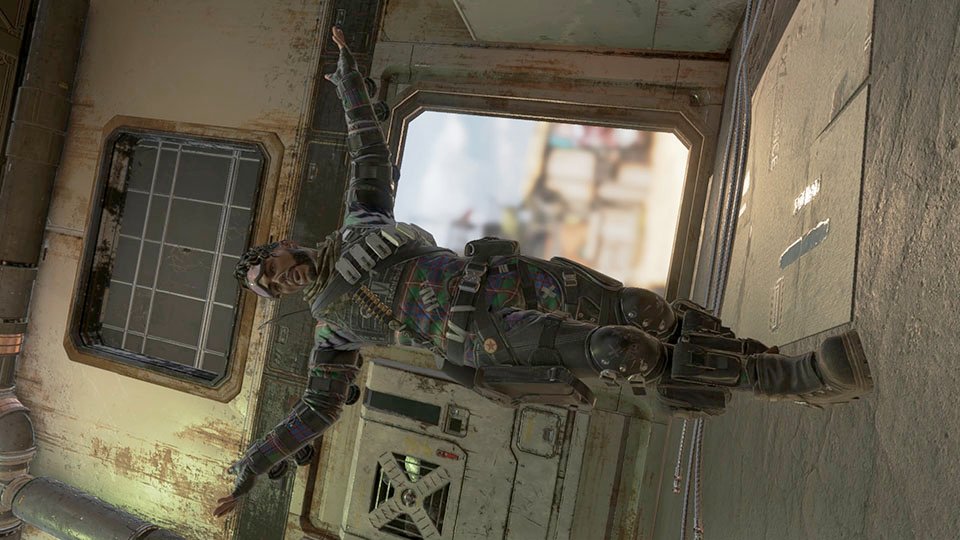 Early in Apex‘s release, I couldn’t help but feel like players who decided to spend money on either Mirage or Caustic had a distinct advantage over those playing for the first time with the other six legends. Mirage’s hologram ability, in general, absolutely throws newer players for a loop. During that first release day of playing Apex, it was pretty rare to encounter a Mirage player — and every time I did — I fell for those silly hologram tricks.

As nitpicky as it is to complain about paywall elements in a free-to-play game, I do have concerns about how this approach could potentially give those willing to pay for newly released legends a brief, but a very distinct edge. If Mirage and Caustic are the templates for how new legends will be introduced, then I’m curious how things will shape up when the roster of legends has potentially more than doubled.

Will those hypothetical legends still be behind the same grind and paywall? If so, just imagine being a new player and only having access to those six original characters. Meanwhile, veterans or those simply willing to pay for them will have an edge in terms of legend selection over newcomers. Of course, as I’ve said, this is all hypothetical. But it is something I hope Respawn can avoid by making once-premium legends freely available in later seasons (if they choose to introduce more with the same system). 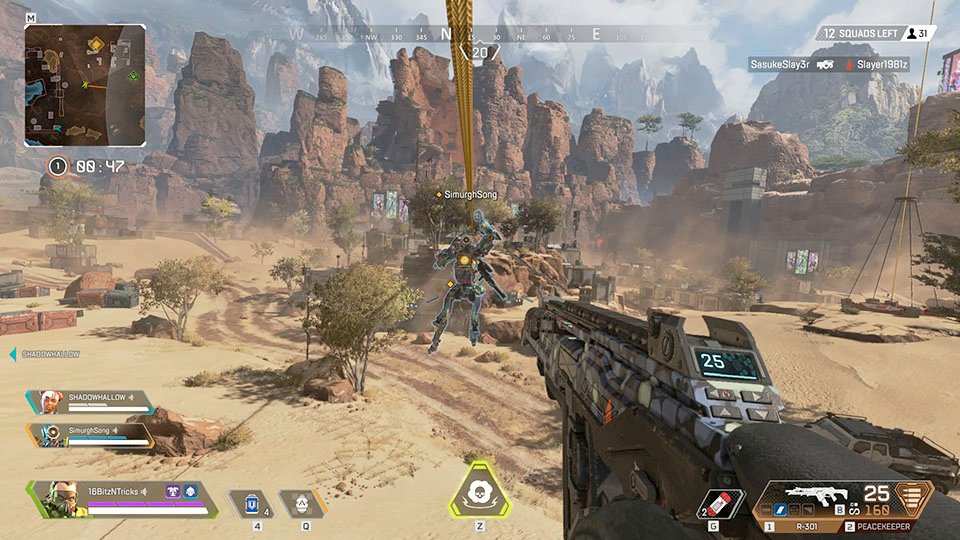 Legends aside, Apex without a doubt has the best gunplay in any battle royale game I’ve played yet. The wide variety of weapons all have their own unique quirks and uses, all of which can also be upgraded with a number of attachments found throughout the map. These range from optics and sights to different barrels and stocks. But, most importantly, the weapons all feel and sound very satisfying to use. Shotguns have a solid range to them and the Prowler sub-machine gun in particular with a select-fire receiver and a good extended magazine became my go-to weapon of choice.

Considering Respawn is made up of many former Infinity Ward employees, this aspect of Apex should probably be the least surprising in this surprise of a release. But, unlike Respawn’s previous work with Titanfall 2, mobility has been scaled down a fair bit. In place of giant mechs and wall running is just your standard sprint and sliding (both of which do feel tight and responsive on either a gamepad or mouse and keyboard), but I still can’t help but wonder what could have been with the skill-based and thrilling movement of Titanfall.

Respawn has stated they originally intended to include wall running and Titans, but after plenty of experimentation, it just didn’t fit with what they had in mind. On that note of experimentation, though, it’s clear they put plenty of thought into the map of Apex, as it’s easily one of the best maps I’ve played in a battle royale game. From the Swamps to the Thunderdome, all the locales within Apex are easily recognizable and diverse with a good amount of elevation and interior areas to explore as well. 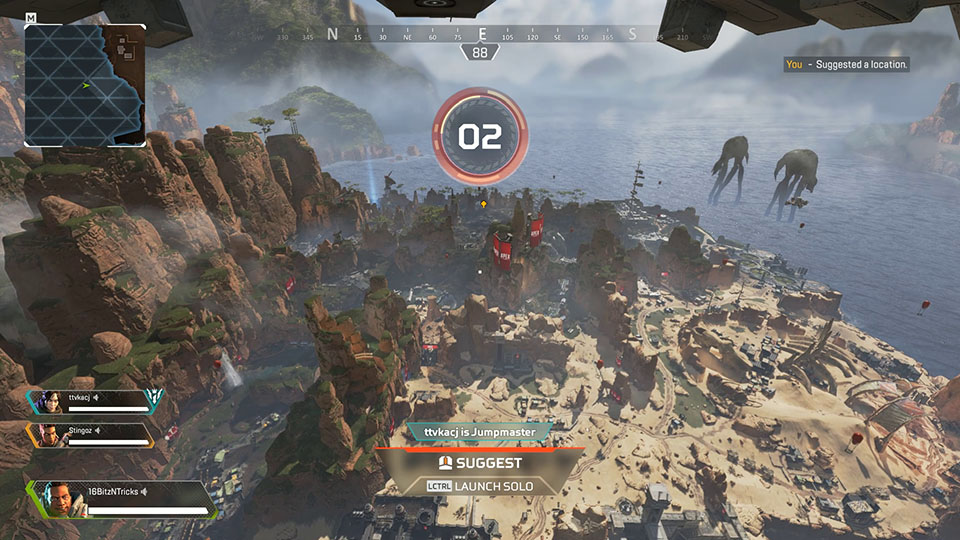 Smart mechanics such as the pinging system only help strengthen all of this, making teamwork with random players or those without a microphone completely viable. Whether you’re spotting enemies or simply trying to navigate, with one simple click of the middle mouse button (or R1 / right bumper on consoles), your squad will be immediately aware of what you’re pointing out. I suspect the pinging system will become the new standard in any future battle royale games — it’s too smart of an idea to not incorporate in nearly anything with squad-based multiplayer.

As mentioned, it’s also with this focus on squads that Apex separates itself from other battle royale games. From the moment you’re dropping into a match, you’re doing so together. Solo play is possible, but it certainly isn’t a viable method of play. Legend abilities work best when performed in tandem with others and fresh concepts such as the brilliant risk-reward of the respawn system only further encourage you to play with your squad until the very end.

Any time someone in your squad is killed, you have a limited timeframe in which you can pick up their banner in the hopes of reviving them. Once you do have their banner, you can seek out specific respawn points around the map. Doing so, however, makes them respawn in a very noticeable and loud drop ship, potentially giving away your location. During those last few moments, though, with the circle collapsing around you, bringing back your squad could potentially be the winning factor. 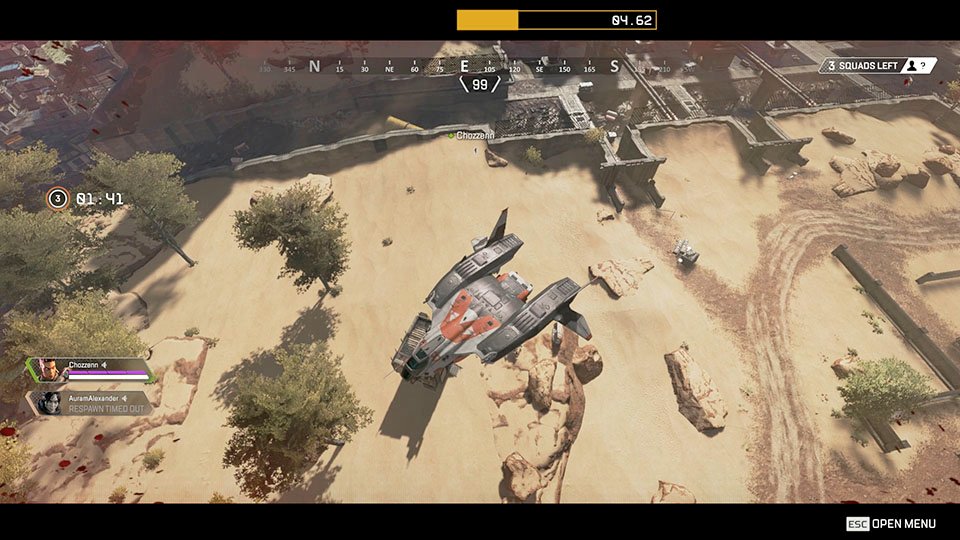 I do still hope a solo mode is in the works, but I can see why they wouldn’t include it now given the limited selection of legends at the moment. Down the road, however, I think it’ll be an important addition. As it stands now, Apex’s biggest issues are ones that can be resolved with future patches. Connection issues and massive lag spikes during high-traffic periods (like weekends) are rampant. Outside of that, the game is remarkably stable. I didn’t experience any major bugs or hiccups of any kind, which is hugely commendable considering this was a surprise release with no public beta testing.

Ultimately, I’m excited to see Respawn’s plans for the future. Although Apex Legends is fairly light on content at the moment, after having played it for over a week now, it’s become my new favorite battle royale game. Matches are quick enough that I never feel burned by a sudden loss and jumping back in with a different legend makes it more addictive than any battle royale I’ve played so far.

[This review is based on a retail free-to-play build of the game provided by the publisher.]