It might come as a surprise to some, but DSiWare is still a thing. I know, right? So much attention has been placed on Nintendo’s plans — whatever they may be — for the 3DS eShop that the few games that are released on the service’s predecessor aren’t even given a second thought. That’s not cool, man!

Something nifty pops up in the store every once in a while, and it would be a shame to let good software go unplayed. Such is the case with Antipole, a gravity-manipulation platformer that taps the same pool as simple yet challenging indies like N, VVVVVV, and similar Flash time-wasters around the Web. If you are willing to brave the murky Nintendo download portal, you ought to give this game a go! 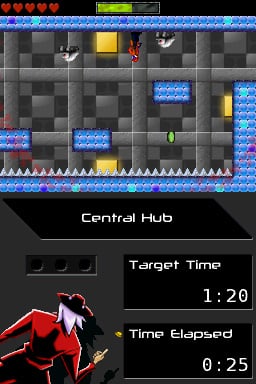 Antipole values function over form, and for that reason, it is neither the prettiest nor the best sounding game around. However, this no-frills approach actually helps train your focus on the action with minimal distraction. All that you need to worry about are Johnny Hurricane, the sharp-suited mercenary with a totally ’80s action hero moniker, your gun, and the swarms of mechanized miscreants blocking your path to the goal.

Though you can run, jump, and shoot, you’ll be spending most of your time tooling around with the Gravity Manipulator. By pressing the R button, you can flip gravity for a short duration, and by defeating one of the game’s bosses, you can extend that duration. At the outset, you’ll use this ability to cross long stretches lined with spikes and to reach platforms out of jumping distance. By the end of the game, you’ll be navigating winding spiked halls via short gravity bursts, monitoring your remaining reserves.

The challenge scales smoothly from one level to the next, and each stage introduces some new obstacle. Reaching the goal may sound straightforward, but there is a list of factors that grows as the game progress and must be carefully considered. Chiefly, it’s not only Johnny who flips towards the ceiling but also every baddie that happens to be caught in his gravitational field. Avoiding enemies is therefore a bit trickier than merely passing overhead. 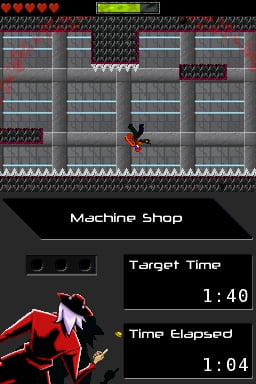 The nastiest challenges arrive in the final batch of levels. You’ll find robotic spiders that possess a gravitational field of their own, which will in turn reverse your own technique. You’ll also come across instant-kill acid pools that are affected by changes in gravity. Should you enter a room with both hazards, prepare to replay that section over and over again.

Despite all that, the game is quite fair and accessible. You possess infinite lives, and dying will merely send you back to a nearby checkpoint. Aside from the acid, every enemy and hazard, including spikes, consumes just a single heart from your life meter. If you wish to throw caution to the wind and burn through the game with little regard to safety, you’ll have no problem clearing the game in a couple of hours.

Of course, the completionist will want to locate all the Challenge Medals and earn all the Gold Medals. The medals, three per non-boss level, are used to unlock bonus challenge missions outside of the main game — essentially mini levels with more heavily concentrated difficulty. Gold Medals, on the other hand, are acquired by clearing a level within a specified limit. Because the clock doesn’t roll back whenever you die and respawn, though, a no-death run is almost always demanded. When you play the game in this fashion, you’ll find yourself restarting entire levels in an attempt to find that balance between speed and measured risks. 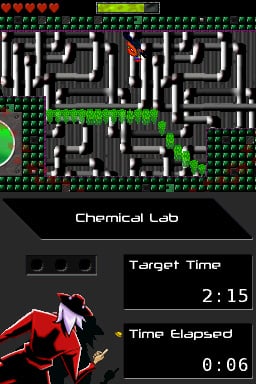 I appreciate how you can essentially adjust the game’s difficulty outside of selecting “normal” or “hard” mode (though that option is still available). You can take the no-stress route and just enjoy the clever platforming, or you can go for the gold and strive for perfection. If you want to extend your playtime, though, you’ll want to take the latter path.

With only 16 levels plus four boss rooms, the game is over fairly quickly, but at least there’s plenty of variety packed in that space. In addition to the bonus missions, you can replay the game in unlimited gravity mode or go for achievements, which include avoiding confrontation with a particular enemy or beating a boss without firing your gun. Also, if you happen to have Saturnine Games’ previous DSiWare title Cosmos X2 on your machine, you’ll be able to replace your weak pulse gun with a variety of weapons from the other game — a nice plus!

As stated before, Antipole reminds me in many ways of N and VVVVVV — indie games that simplify gameplay down to its purest essence yet are still able to provide a hearty challenge. Making the game any longer would have run the risk of spreading the gravity gimmick or level variety thin, so I’m happy to say that it struck the right balance. There’s nothing like solid platforming action to make those stale Nintendo Points useful again!