I’m not huge on racing games. There are only a few specific sub-genres of racers that I truly enjoy. The first is the tried and true kart racer and the second is the Wipeout and F-Zero style futuristic racer. Antigraviator falls into the latter.

Antigraviator is all about overwhelming speed a feature it nails, but it doesn’t do much else to differentiate itself from other games in the genre. 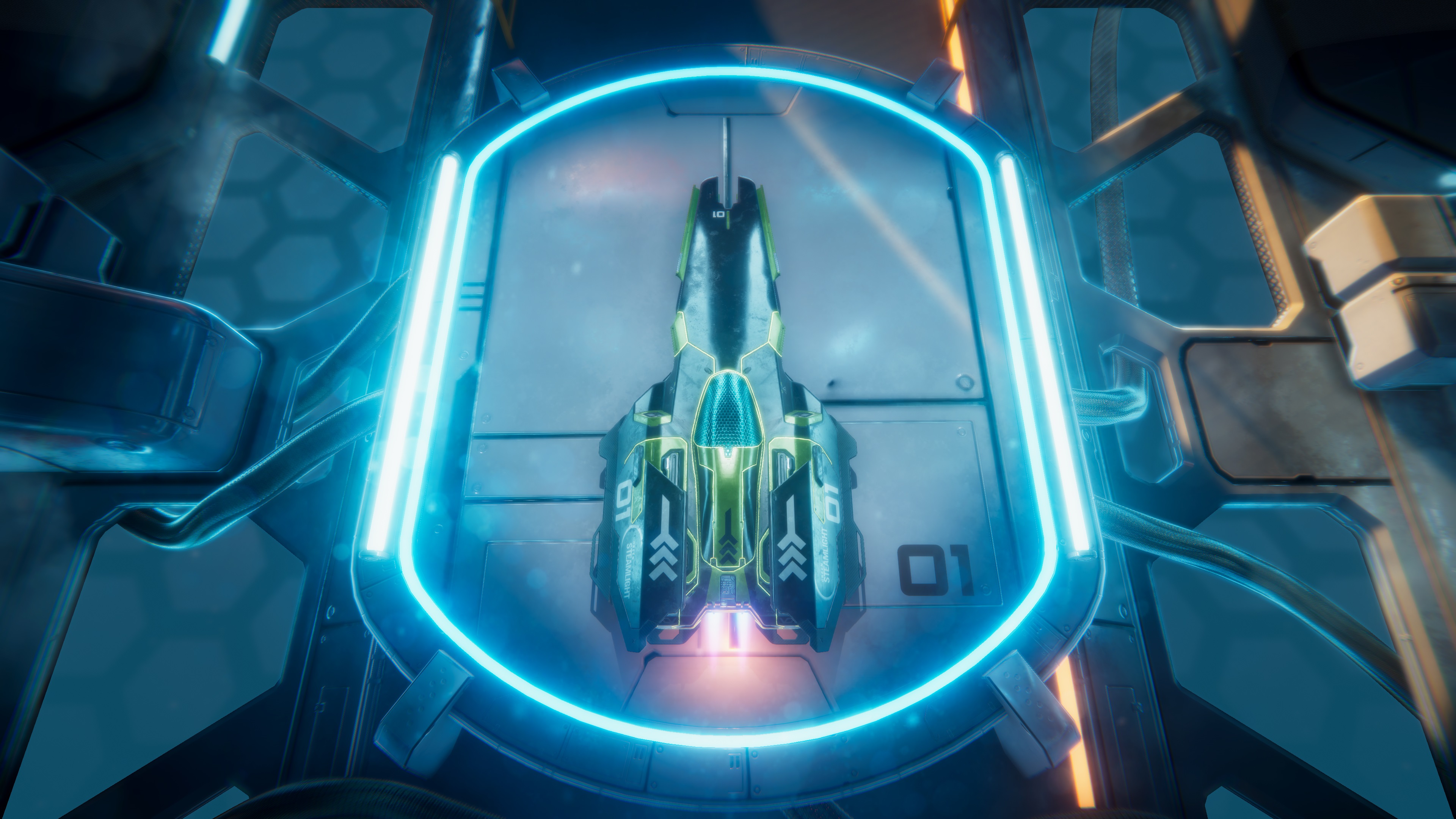 The most important part of any racing game is tight controls, and Antigraviator feels responsive and tight right off the bat. You can play using a keyboard though I would advise against that. I used an Xbox One controller during my time playing. You have acceleration and braking as in most racing games as well as an air brake used to pull off tight drifts to keep your speed up.

Antigraviator has no speed limit so you can get up to some pretty intense max speeds if you know the track well enough to hit every turn in the right spot. You also have use of a barrel roll mechanic. It can be pretty handy for dodging traps or slamming your opponents into the guardrail of the course.

Tracks are also littered with boost spots that can make hitting some of those breakneck speeds easier, and you can grab orange orbs that allow you to pop off a boost at your leisure.  There’s also a trap mechanic that I’m not exactly thrilled with, traps are mostly environmental like causing a rock slide on the desert courses, but their uses are very limited as you can’t hold on to a trap like in most kart racers and only one trap can be triggered at any given moment. So if your opponent chooses to unleash the rock slide mentioned above you’ve missed your chance for that lap.

Whoever triggers the trap also gets a shield to protect them from the havoc it creates, but I think the game might just be better off without this feature even if they don’t really ruin the experience for me. There are plenty of customization options to unlock for the futuristic cars. You can customize your color scheme but also switch out components that balance stats like your speed and handling. I went handling all the way once I had access to all of these components.

You have access to a total of fifteen tracks that’s three tracks per five different worlds. Each track also has a reverse option bring us up to a total of thirty courses. Each world sticks to a theme like Arctic, Future city, and desert; and all of the tracks are pretty well designed even if a few of the names are eye-roll worthy (one of the course is called Michael’s Bay.)

If a track doesn’t give you a direct indication of an upcoming turn via an arrow indicator or roadsign it does a pretty solid job of telegraphing the course by showing it off over the horizon or otherwise. There isn’t a lot of time to react to turns, but that’s all part of the risk-reward of not having a cap on your max speed. It can make for some pretty cool wipeouts. 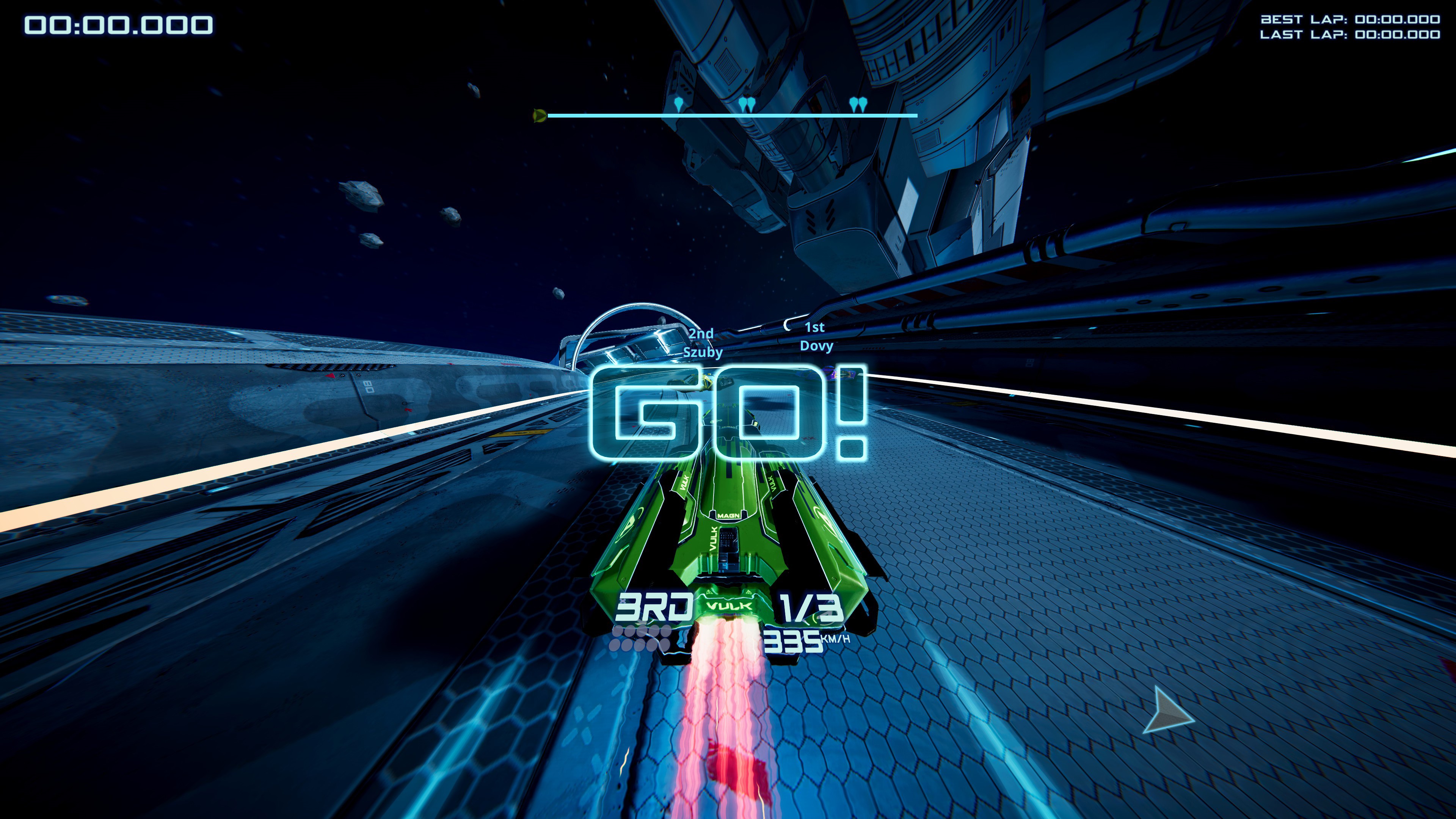 The single-player campaign is about as simple as things get. You race bots across four courses through varying game modes and if you place first you earn some credits and unlock the next campaign league. If you place second or third you still get some credits, but you’ll have to replay the league to advance. The earned credits are used to purchase the ship customization options I mentioned earlier.

You can also do a custom game against CPU racers or do local split screen if you have a few friends handy unlike myself, but the online racing is the real reason to keep coming back. I jumped into a scheduled media session and had no issues getting into a few races. That I naturally lost.

Once you’re all settled in and ready to race there are three game modes to choose from. You have the standard three-lap race as well as Deathrace and Countdown. In Deathrace each player has only one life and your goal is to survive for as long as possible. Which is easier said than done as your speed keeps increasing. Countdown is a timed checkpoint style race where your aim is to beat the clock with each checkpoint adding a few seconds to your ticking timer.

Antigraviator feels great to play and has a style that will be familiar to players of F-Zero and Wipeout, but its attempts to differentiate itself like the trap mechanic don’t add much to the overall package. It does, however, hit the mark where it counts. The track design is solid, the sense of speed is great, and controls are tight and feel familiar for anyone who’s played a racing game. I’ll be sure to get some more time in via the online mode and the occasional night in when I manage to coax my friends into stopping over.