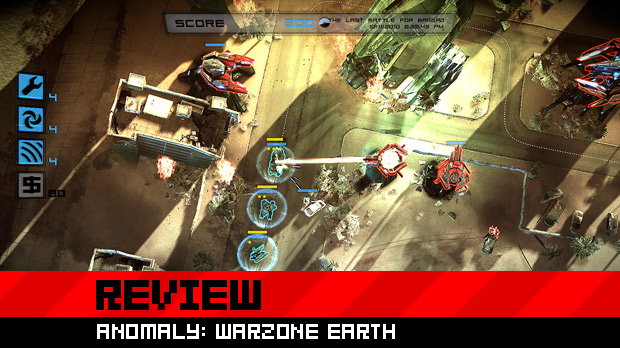 Even though the tower defense genre has grown stale over the years, some developers understand that there’s still some life in the genre if you play around with the formula. On the one hand, you have a game like Sanctum that changes the perspective to first-person and adds the player as a weapon. On the other hand you have Anomaly: Warzone Earth, which turns the genre on its head to give you a reverse tower defence strategy game

Instead of building towers to force units through a path, you create a path for units to destroy towers. And by doing so, 11 bit Studios has created one of the most enjoyable strategy games in recent history. 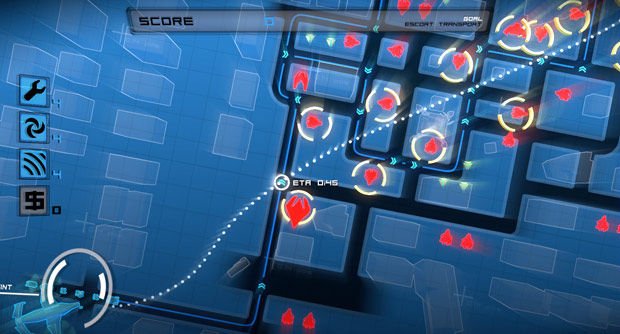 Just like in a tower defense game, a column of units will have to follow a route to a goal on the other side of a map. But three core gameplay elements and a hell of a lot of polish help make Anomaly: Warzone Earth an innovative and fun title. That is, while it lasts.

As a commander unit who walks around on the map, your job is to keep your units alive and to support them. In every grid- and maze-like map, you start with either a set amount of cash to buy units or a few units by themselves. A quick scroll-up on the mouse, or a press of the control key, zooms you out to a map where you can direct the units’ route by changing the direction they will take at certain crossroads.

Setting a path is not simply a matter of creating the shortest route to a mission’s goal and never looking at it again, though. Events happen dynamically and force you to re-evaluate your path, and then there’s the matter of letting your units pass resources on their path, so you can upgrade and buy new units.

Whatever route you end up with, it is inevitably littered with various types of enemy towers, each with different types of attacks, that require you to deal with them in various ways. As you destroy towers, it provides you with a little money (more for larger towers) and occasionally allows an airplane to drop an ability item for your commander. And it’s these abilities that turn Anomaly from what could have been a boring attempt to turn the tower defense genre on its head, into a challenging and very enjoyable game of micromanagement and tactical planning. 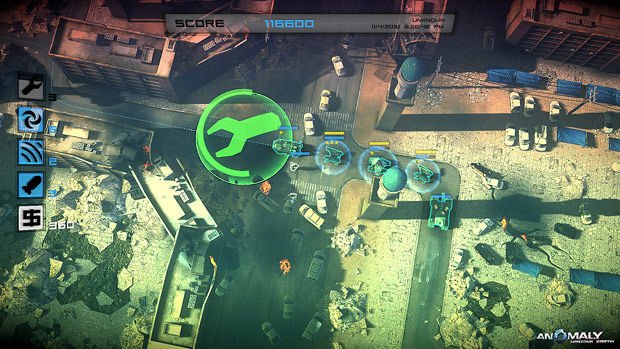 Your commander can use abilities to drop down zones that repair any unit that passes through it (usually healing up to 3 units in a column before it disappears), create smoke screens that reduce enemy accuracy and damage, plant a decoy unit that draws fire from all towers within range, or call in a direct airstrike to deal with particularly annoying tower types.

Because there is no other way to heal your precious units than by using a repair ability, and because your commander doesn’t do any damage himself, you’ll quickly find yourself rushing between collecting ability items and trying to use them in tactical locations. As you progress through the game, you go from a casual “Oh well, I might as well pick this thing up while I’m not doing anything” to “Holy crap, I need to pick up these things right now or I’ll run out, but I also need to lay down a smoke screen and heal my upgraded tank before it dies!”

And make no mistake; Anomaly can become very challenging on the “normal” (Advanced) difficulty, even for veteran strategy gamers. Even though you can get through the game’s 14 missions relatively quickly on Advanced, you’ll find yourself restarting from a checkpoint quite often in the later missions. 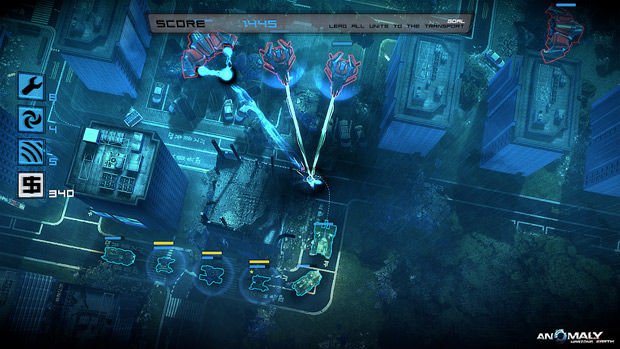 While managing your commander’s abilities keeps you engaged throughout a mission (the game pauses when you enter the map to plan your route), managing your units is equally important. You have a limited amount of money to buy them with and even though you can upgrade any one unit, it never turns it into an indestructible force you don’t need to look after.

Units come in a variety of types, ranging from cheap and weak APCs to long-range rocket walkers, armored tanks and flamethrower tanks, shield-tanks that project a shield to units in front and behind it, and supply wagons that provide you with ability items as you destroy towers.

Because your units will move in a column, positioning becomes just as important as choosing what to spend your money on. Rocket units have a long range but are fragile, so you don’t want them at the front unless you’re continuously going to micromanage the unit order in your column (which you can do instantly by pausing the game). Heavily armored tanks, supported by a shield generator tank, make for better survivability but since the shield-tank takes a spot in the column, it costs you in frontal attack power as you approach towers.

Over time you’ll find a good formation that works for you, and even though some missions beg for different units to spearhead your column of tower death, it’s easy to stick with a shielded formation supported by long range rocket artillery. 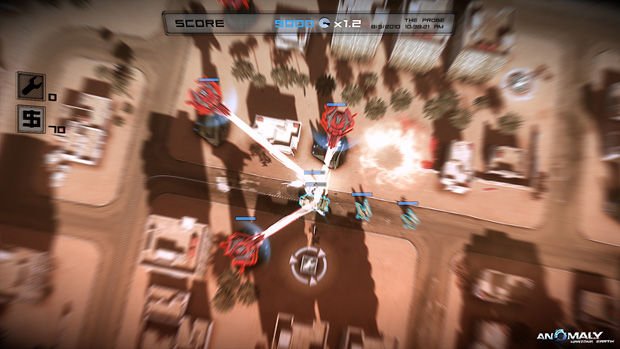 The same holds true for towers. Standard towers become merely a way to farm ability items in later levels, while Behemoth towers will destroy your units quickly if you don’t distract them with a decoy. Other towers quickly rip through your shields and slowly drain your units’ health unless you provide a smoke screen or a decoy (or both), or blast through a row of units if you are foolish enough to let them approach such a tower head on.

Still other towers can create a field that makes your units attack your commander if they are both inside of it, or syphon your used abilities to instantly repair all towers in range — including those you just destroyed — unless you drop them behind cover. So just like towers in a tower defense game can be built to deal with specific types of enemies, Anomaly‘s towers require you to deal with them in tactical ways lest you lose units, and with them lose preciously spent resources.

The unit and resource management, ability management, and route-planning elements all combine into a really fun, enjoyable, and fresh strategy experience. And while the gameplay is a lot of fun, the polish of the game is what will wow you when you start it up. Every element of the game has such a high level of polish that it turns Anomaly: Warzone Earth into a standard that anyone, whether it’s a small indie team or a publisher-owned 100-man studio, should strive to match.

The UI is clean and clear, the tutorial lets you easily learn the game without becoming bored, and the graphics are great and lush without putting too big a strain on your hardware. Checkpoints are impeccably placed for the most part, a few rough ones notwithstanding, and make it easy to undo mistakes when a created route leads to disaster.

And the controls are close to perfect, with small touches like the mouse cursor letting you scroll around your commander’s location even before you reach the edge of your screen, while hotkeys and a great implementation of mouse button controls only add to what is already a seamless experience. 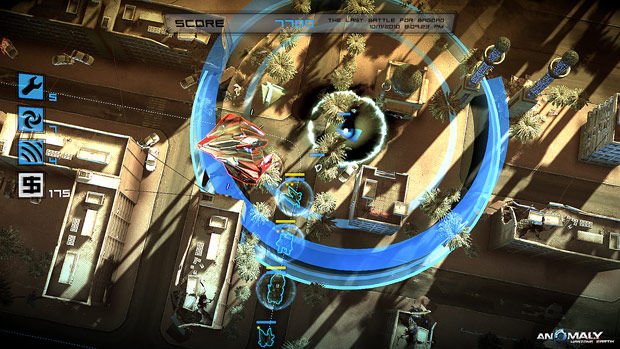 An experience that isn’t the longest at around 5 hours to go through the game’s missions, but one that doesn’t overstay its welcome either because of it. When you are done with the campaign there is always the Hardcore difficulty to brave, as well as two skirmish-type modes where you have to traverse a big map from location to location to take out power generators, and the towers that protect it along the way.

Whether you’ll actually go back to brave the harder difficulty or to play the skirmish maps will depend from player to player. Leaderboards throughout the game add to the replay value, but again it depends on how much you care for those. But this is a game that should benefit enormously from DLC and updates, and one that is already a blast to play while it lasts. For the price, Anomaly: Warzone Earth offers a fresh and exhilaratingly fun strategy experience that only few titles can match.