Now if only they had a worthwhile game to use them with. 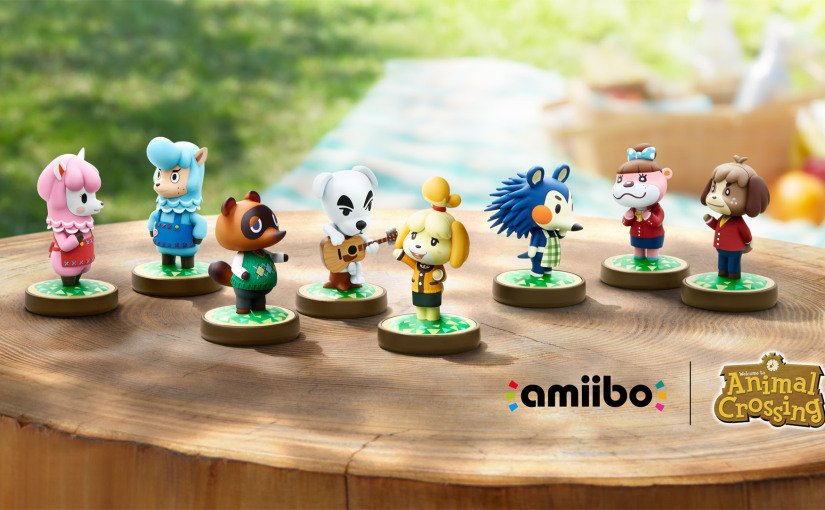 Right off the bat you should know that you do not need to buy any additional amiibo figures to enjoy this Festival, but you will need at least one pack of Animal Crossing amiibo cards to experience everything the game has to offer. Players can use one of the two amiibo figures included with the game or one of several generic Villager characters. Sorry, your Villager amiibo doesn’t work here, because that would make too much sense now wouldn’t it.

If you’ve read about this game already then you probably know about Desert Island Escape and how fun it is. It is fun, but it’s also unplayable until you unlock it. To do that, you’ll need to play through the board game portion of Festival several times, collecting Happy Points. The board game itself is easy for anyone to understand: players take turns moving around a game board collecting Bells and/or Happy Points. Landing on a pink square will reward you with these while purple squares will take them away. At the end of the game, Bells are converted to Happy Points and the player with the most points wins.

The board game itself isn’t that exciting and many will find it flat-out boring. This isn’t Mario Party or Wii Party U where you compete against other players in mini-games. Instead, it’s just you and up to three other people rolling dice, moving a few spaces and then watching a scene play out that either helps or hurts you. You can also play the game by yourself with three AI controlled characters, though the thought of someone doing that makes my soul cry.

To its credit, I will say the amiibo Festival thoroughly adapts the Animal Crossing experience into a board game. Trademarks of the franchise, such as visitors coming to town and new residents moving in, add variety to the simple game play. When Redd visits, for instance, he’ll sell you cards that you can use in place of rolling the dice. Phineas breaks out a roulette wheel to reward a player, Joan sells her turnips and Dr. Shrunk gives players a card while telling some truly horrendous “jokes.” Holidays, bug catching contests, fishing contests and other Animal Crossing staples are present as well.

There isn’t really any strategy to be found in this game, outside of getting some choice cards from Redd, Shrunk, and others. The roll of the dice controls all, from deciding who wins fishing/bug catching contests to how much you can sell your turnips for. If you’re worried amiibo Festival might contain some of the “unfair” star granting moments from the Mario Party series, fret not; this game forgoes those type of friendship-ruining shenanigans for something that is more about players enjoying themselves rather than competing against one another.

At the end of each game, Happy Points are converted into Happy Tickets (where 100 points equals one ticket). Those tickets can be spent augmenting the game board or unlocking the mini-games. You are forced to choose between making the board game more interesting or accessing what could be fun mini-games, but allow me to make that choice for you: unlock Desert Island Escape and spend the rest of your points upgrading that game board. In my experience, it took five playthroughs of the board game to unlock all of the mini-games, and that was with the decision to forgo updating the game board and getting lady luck on my side to end one playthrough with 10 Happy Tickets. If you’re wondering how long five playthroughs is, it’s about six hours. You are given the option to set a time limit for the game, but less time equals fewer Happy Points.

While one playthrough of the board game was of light enjoyment, several days of playing the game again and again proved to be tedious. amiibo Festival‘s existence as video game isn’t as fully realized as it could be. As a digital product, the game can easily implement rules and conditions that could be too burdensome for a physical board game. Animal Crossing amiibo figures level up to unlock new costumes and expressions; also you can scan amiibo cards to move new characters into the game board town. Unfortunately, it doesn’t take full advantage of being a video game. The scenes you watch when you land on a pink or purple square tend to repeat as early as your second playthrough and a lack of variety in the game board will become apparent all too quickly. The game also fails to include a suspend game feature outside of hitting the Home button.

As I said above, you will need to purchase a pack of Animal Crossing amiibo Cards to experience the entirety of the game. The mini-games Mystery Campers and amiibo Card Battle require six amiibo cards to play while the other six games can be played with the three exclusive cards that come with it. The less said about most of these mini-games the better as I doubt many people will return to them after a single playthrough. In all honesty I can’t tell you which one is worse: Quiz Show for its baffling execution, Acorn Chase for its reliance on a not-always-reliable NFC reader or Fruit Path for being… scratch that, Fruit Path is easily the worst. 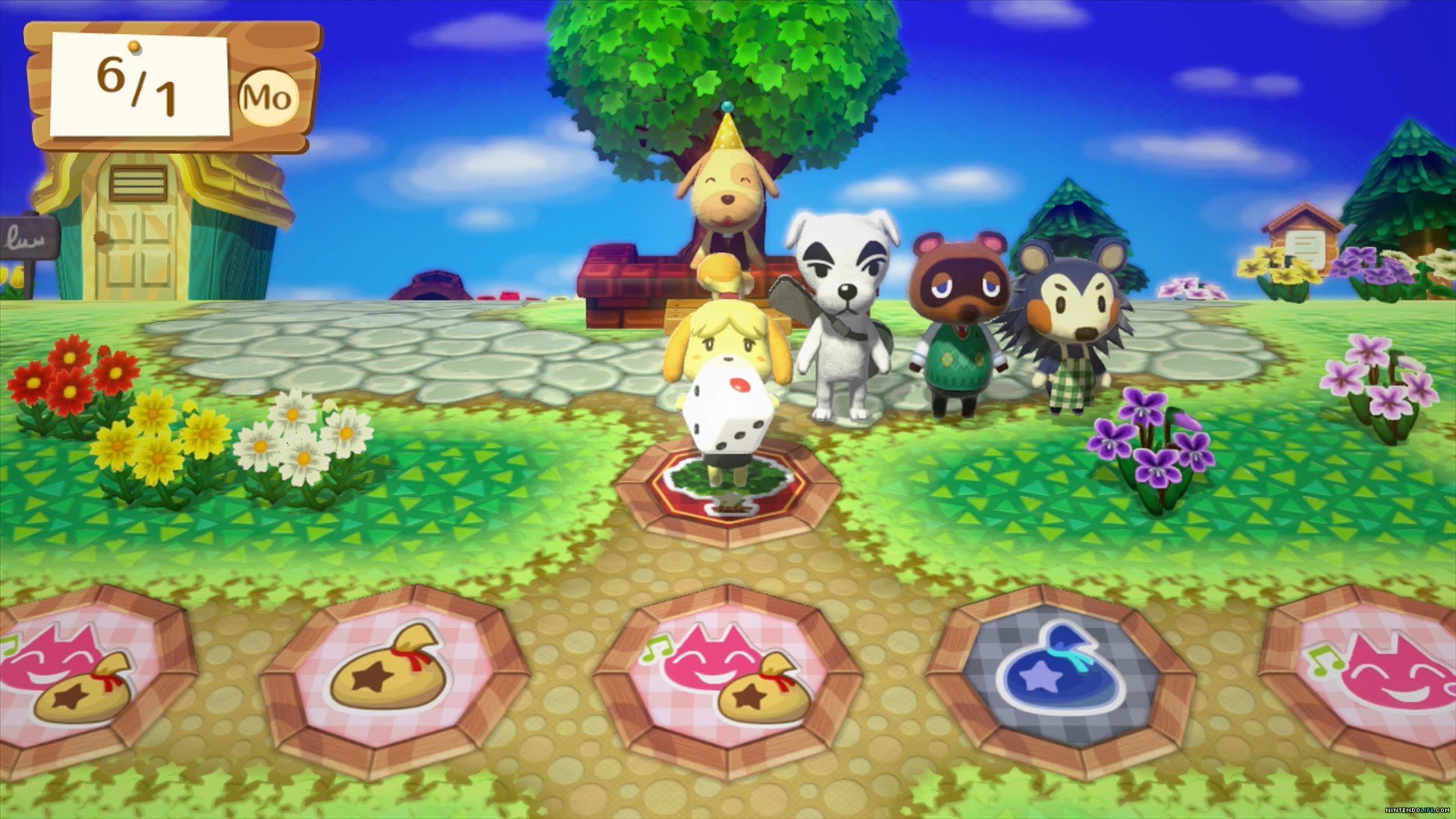 Instead of focusing entirely on the bad, let’s talk about Desert Island Escape, as its obviously the one mini-game that had more than an hour of thought put into it. This single-player game has you controlling three characters that have been scanned in from their amiibo cards. The object of the game is to find the pieces you need to build a raft to escape the island before you run out of days. You also need to gather food and collect supplies to build tools that will help you on your journey.

What I love about Desert Island Escape is how varied your experience will be depending on which amiibo cards you’re using. Different characters have different skills. Cats are better at fishing, bears are great at gathering honey, bunnies like to sleep for a day and then move more than double the amount of spaces the next day. There is so much strategy found in such a simple premise that it almost feels like more development time went into this than the rest of the game. If you already own a lot of amiibo cards you will have a blast with this game because you can attack each of the 30 stages in new and interesting ways depending on who you’re playing with. This game is so enjoyable, I’m hoping Desert Island Escape could somehow pulls a Captain Toad and end up as its own, separate franchise.

As fun as that mini-game is, Animal Crossing: amiibo Festival is probably not a game you should buy. Had the board game been an extra feature or weekly activity in the next mainline Animal Crossing game (hint, hint Nintendo), it would easily serve as yet another feature that enhances an already rewarding experience. As its own thing, it falls short. Animal Crossing: amiibo Festival isn’t a bad game, save for most of the mini-games, it’s just not interesting enough to warrant the long term investment needed to see everything it has to offer.