In recent years, the survival horror genre has seen something of a decline. Its once-defining characteristics have been co-opted into other genres or simply set aside in favor of more refined, accessible play. These days, the modern survival horror title more resembles an action game with the occasional jump scare than a truly fear-focused offering.

Can Amnesia: The Dark Descent bring some real horror back to the table, or will it end up as an experience one would rather just forget?

Now, a title like Amnesia might already be inducing groans among some players, soured by long years of storytelling weighed on the crutch of convenient forgetfulness. This amnesia is different, though, in that as you go along, you’ll start to wonder if remembering who you are (a nineteenth-century Englishman named Daniel) and why you’re supposed to kill a man named Alexander is really worth your being terrified and out of sorts all the time, afraid of shadows but also loathe to stay in the light too long.

Amnesia traps you in the uncomfortable position of having to keep from going completely insane as you play, but all the while, it’s constantly forcing you to manage your limited resources and leave your few safe zones, which themselves can be compromised. That tension adds to the atmosphere and magnifies the sense that you are, at all times, teetering on the brink of madness or death (sometimes both).

The game treats sanity as other games might treat health. Stay too long in a dangerous situation (i.e. in the dark or in the presence of an enemy) and it drains. But unlike seeing a meter drain or contrived bloodstains on the screen as in most first-person games, the effects of an ebbing mind extend beyond the visual. As sanity drains, the field of view warps, making nearby surfaces swim, shiver, and deform. Daniel whimpers, his breathing turns ragged, and at sanity’s nadir, the mouse even lags, giving the impression that you, the player, are not so much Daniel himself as you are a passenger in his mind, struggling harder to control his actions as Daniel’s ability to perform them deteriorates. 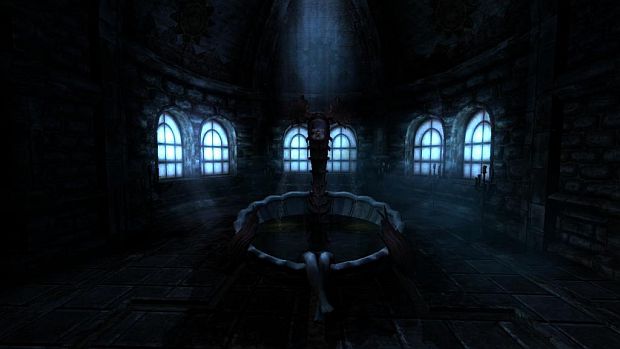 And struggle to control Daniel’s actions you will, as Amnesia features a control scheme seemingly derived from Jurassic Park: Tresspasser (or Frictional’s earlier effort Penumbra), wherein interaction involves clicking on objects and moving the mouse in the direction you want to push, pull, pick up, or throw. Want to open a door? Click the knob and pull the mouse back (or push forward, if the door opens that way). Want to open a drawer? Click it and pull back. Adding to the fun is the fact that you can pull most drawers straight out of their cupboards, making the act of ransacking a room in search of clues or supplies feel surprisingly tactile and satisfying.

The physics-based control scheme, combined with Daniel’s slow default speed and the need to proceed slowly when you can barely see ten feet in front of you (even with the aid of a lantern), makes Amnesia‘s gameplay feel awkward and ponderous, and would likely punish any attempt to fight back with frustration. It’s a good thing, then that you can’t (and shouldn’t) fight back. It’s made clear early on that Amnesia isn’t about combat. The shambling monstrosities are to be fled from rather than confronted. You couldn’t even fight them if you tried, as even looking at one drains sanity at a startling rate. Thus, an encounter with a monster is always cause for sudden, reckless panic as you sprint desperately in the opposite direction, fumbling to close doors behind you and cowering in dark corners while staring at the wall and hoping that you don’t go bonkers while waiting for it to go away. 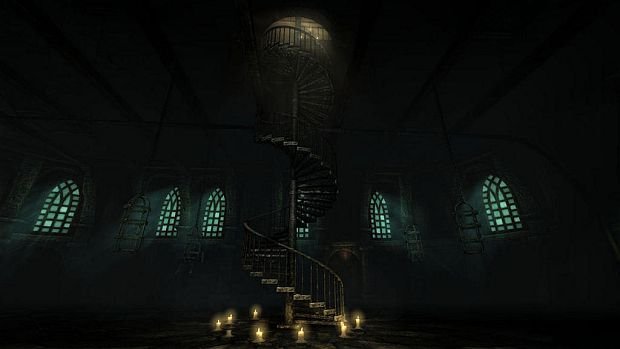 Light is also treated as a precious resource, as it’s the only way to preserve sanity. As the game goes on, you’ll naturally start to dart between light sources, huddling near one while you try to figure out where you are and how long you’ll be able to last in the shadows before having to bring up your lantern or use up your limited tinderboxes to ignite a nearby candle or torch. Some of the game’s most frightening moments occur when you find yourself running out of lantern fuel and a monster’s appearance or unlucky gust of wind has snuffed out all the torches, leaving you to scramble blindly into unknown territory in search of oil, tinder or a dim candle. And even then, trying for the nearest light source poses an element of risk, as staying in the light makes it easier for monsters to find you.

The game’s puzzles are mostly environmental, usually composed of finding parts in one room and sticking them into some contraption in another room, or arranging and rearranging ingredients to mix potions and the like, based on hints found in scattered notes or the environment. While not nearly as arcane or counterintuitive as the sort typical of more traditional adventure titles, they rarely challenge. Unless, of course, accidentally overlooking a puzzle piece or clue because it wasn’t glowing brightly enough in the shadows for you to notice counts as a challenge. Box-stacking puzzles and all the annoyances they present pop up, but are thankfully rare enough to tolerate over the course of Amnesia‘s eight-odd hours of play. 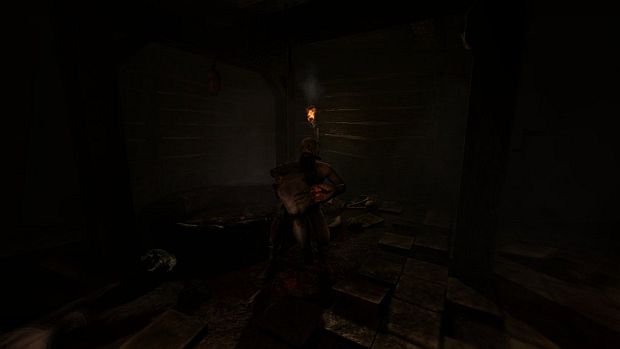 Set in the European castle of Brennenburg, Amnesia‘s story is told largely via that most game-like of storytelling contrivances: the scattered pages of Daniel’s diary, with the occasional in-game flashback thrown in for flavor. It draws inspiration from Lovecraftian myth, what with all of the “just-looking-at-them-drives-you-crazy” stuff, and is centered around a mysterious artifact Daniel finds on an archaeological expedition. It takes its sweet time getting itself together, stubbornly staying vague and somewhat incoherent for much of the game, but comes together neatly in the final quarter, even offering up multiple endings for your trouble.

The voice acting is also solid, though not without fault. For a man frightened out of his wits and barely clinging to his sanity, Richard Topping’s performance as Daniel is a bit too calm and composed, reading his diary entries as if he were recording an audiobook. Sam Mowry (Alexander), though, perfectly captures the impression of a sinister Prussian baron, outdoing his higher-profile work as inFAMOUS‘ Kessler.

Amnesia is not the kind of game for the person who likes to feel in control of his experience. Frictional seems aware that a key ingredient in the recipe for fear is a feeling of powerlessness. The player should be more the victim than the hero, helpless before whatever horrors stalk the halls and lurk in the shadows. Amnesia: The Dark Descent, developed on a shoestring budget by five Swedes, is a rare game that outshines (or rather, out-scares) the high-end, high-budget, triple-A titles that so often lay claim to the horror game mantle.

Pick it up, but you should know that you might be so scared that you’ll have to put it down.