With the release of DUSK last year, publisher New Blood Interactive cemented its status as retro FPS gods. Living up to the hype completely, the classicly inspired shooter recreated an era of gaming that many thought was lost. In a way, you could call New Blood the modern day old-school ID Software, what with its understanding of how to craft a sufficiently classic, meaty FPS campaign.

Amid Evil, another retro FPS game inspired by the likes of Heretic and HeXen, proves that DUSK wasn’t a fluke. Amid Evil is chaotic, beautiful, and fiendishly clever. It has the same understanding for its source material as DUSK did and manages to sidestep most of the issues that classic FPS games were plagued with.

While not quite as good as DUSK, it’s hard to be harsh on Amid Evil. 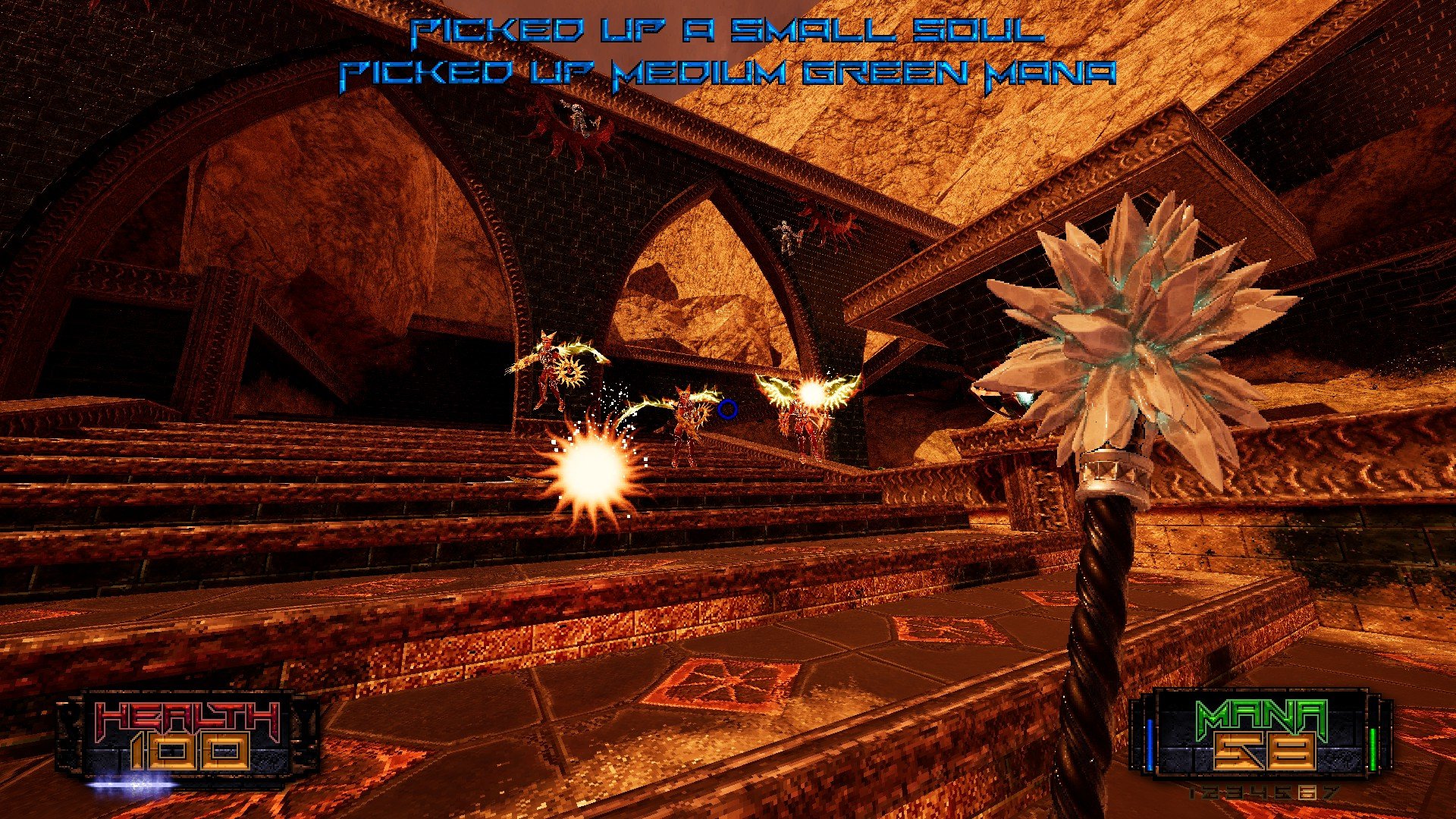 Starting off in a hallway reminiscent of Quake, Amid Evil eases players into how it will play right from the get-go. You’re able to roam around “The Gateway” and get a feel for how your character moves all before you even fire a weapon, which is nice for acclimating yourself to what this game is all about. For all intents and purposes, it feels very classic and does a great job at setting up how atmospheric each level can be.

When you do jump into the first episode, you may be surprised at how familiar everything feels. Anyone with experience in ’90s shooters should find themselves right at home. This is a pretty standard, low stakes episode that gradually increases in difficulty before culminating in a boss fight. It’s textbook FPS 101 level design, which almost gives you a bad impression that Amid Evil is going to be basic.

Much like last year’s DUSK, Amid Evil does not blow its load from the start. A big problem with retro shooters is that, due to the shareware model, the first set of levels was typically the best of the bunch. When you’re trying to convince people to buy your game, you want to put your best foot forward, but that usually meant the final levels were pretty forgettable. While not every episode in Amid Evil is of the same quality, the first only represents maybe 15% of what you’ll see throughout its campaign.

People love to wax nostalgia about how classic games have very defined enemies with distinct personalities and I think developer Indefatigable took that to heart. Instead of slowly introducing new enemy types in every episode, Amid Evil rewrites itself with completely different settings and styles for each passing act. If there is one that is an objective fact about this game, the lack of repetition is it. I wouldn’t call the first episode generic by any means, but things get super kooky by the end.

Amid Evil takes inspiration directly from Heretic, an oft-forgotten entry in ID Software’s catalog that had a more arcane twist to its style. With very unconventional weapons and opponents, Heretic stood out despite being a clone of Doom. Amid Evil captures that sense of style and flair, but crafts far more memorable levels and encounters than Raven Software was able to. I may have played an uncountable amount of FPS titles in my life, but I was still surprised by some aspects of Amid Evil.

You’ll begin in temples, progress to skyward castles, skulk around caverns, and eventually end up in an abstract void. That anyone was able to concoct the final episode is baffling, because I’m still having trouble figuring out what the hell I played. There are definitely lulls in the middle with a few levels overstaying their welcome, but level variety and density are not something Amid Evil lacks. 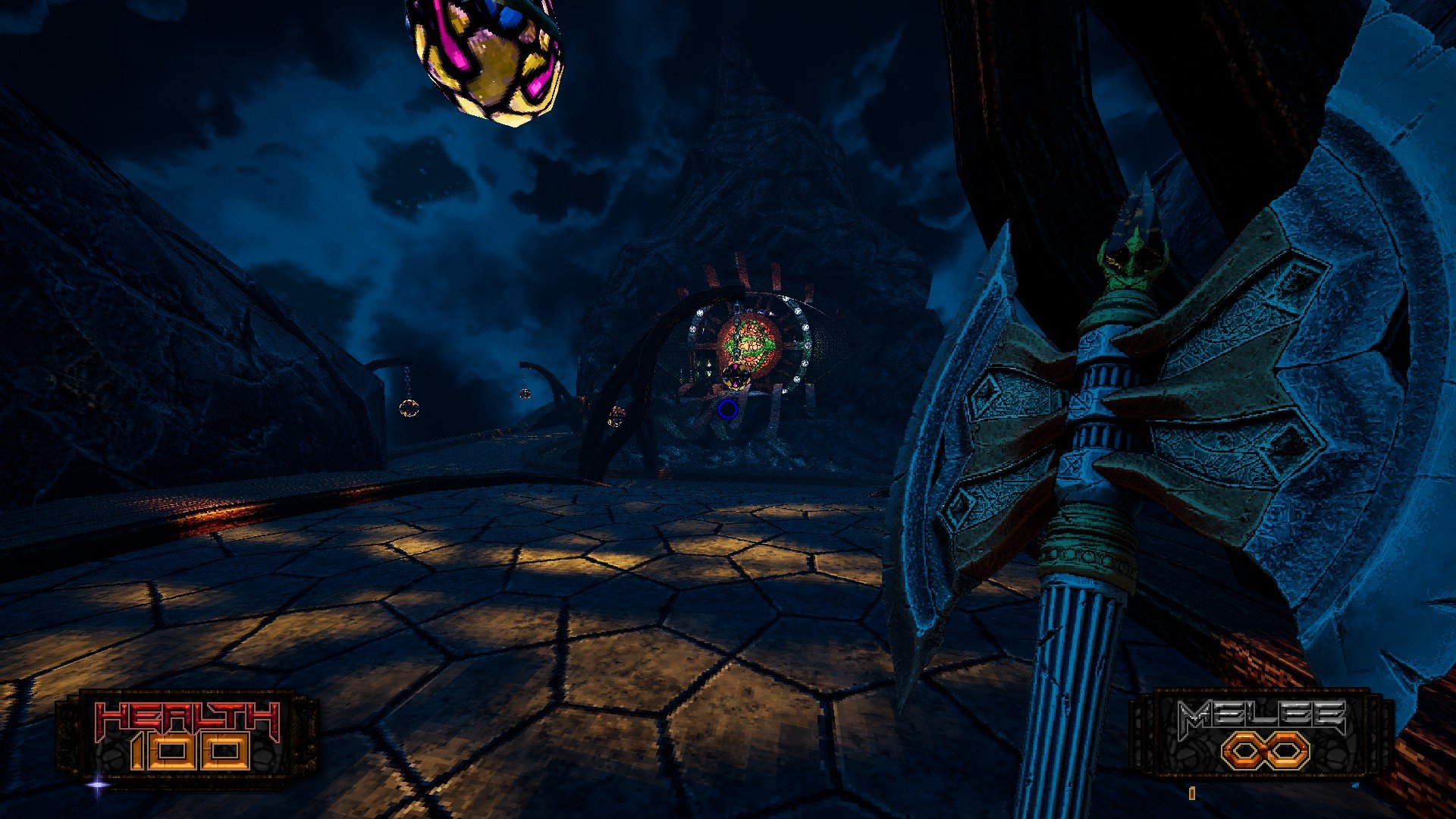 The only thing that really hurts this game’s pacing is that the environments aren’t as distinctive as something like DUSK. It was super hard to get lost in DUSK because levels were decorated with eye-catching scenery in an effort to make important areas stand out. Amid Evil, while being very fetching, doesn’t have that luxury. Each episode is unique, but the levels within them can look a little too similar.

At least the armory stands out. Eschewing the typical FPS roster of various guns, every weapon in this game is some kind of medieval inspired object. Your very first weapon is an arcane staff that fires out orbs of magic and you’ll soon be picking up a sword that shoots beams, a flail that launches spiked crystals through the air, a staff that conjures and disperses lightning, and a launcher that shoots planets at enemies. Yes, the rocket launcher type weapon throws celestial bodies at your foes and explodes on impact. It’s absolutely incredible.

Following along in classic FPS fashion, certain weapons are better against specific foes. You can definitely kill everyone with enough firepower, but swapping through your arsenal to tackle different situations will serve you well in the long run. It’s nice to stockpile ammo and then unleash on a horde without fear, but that might become a problem if you’re consistently wasting 50-80 lightning shots on a foe that can be thwarted with just a few crystal flail swings to the dome. 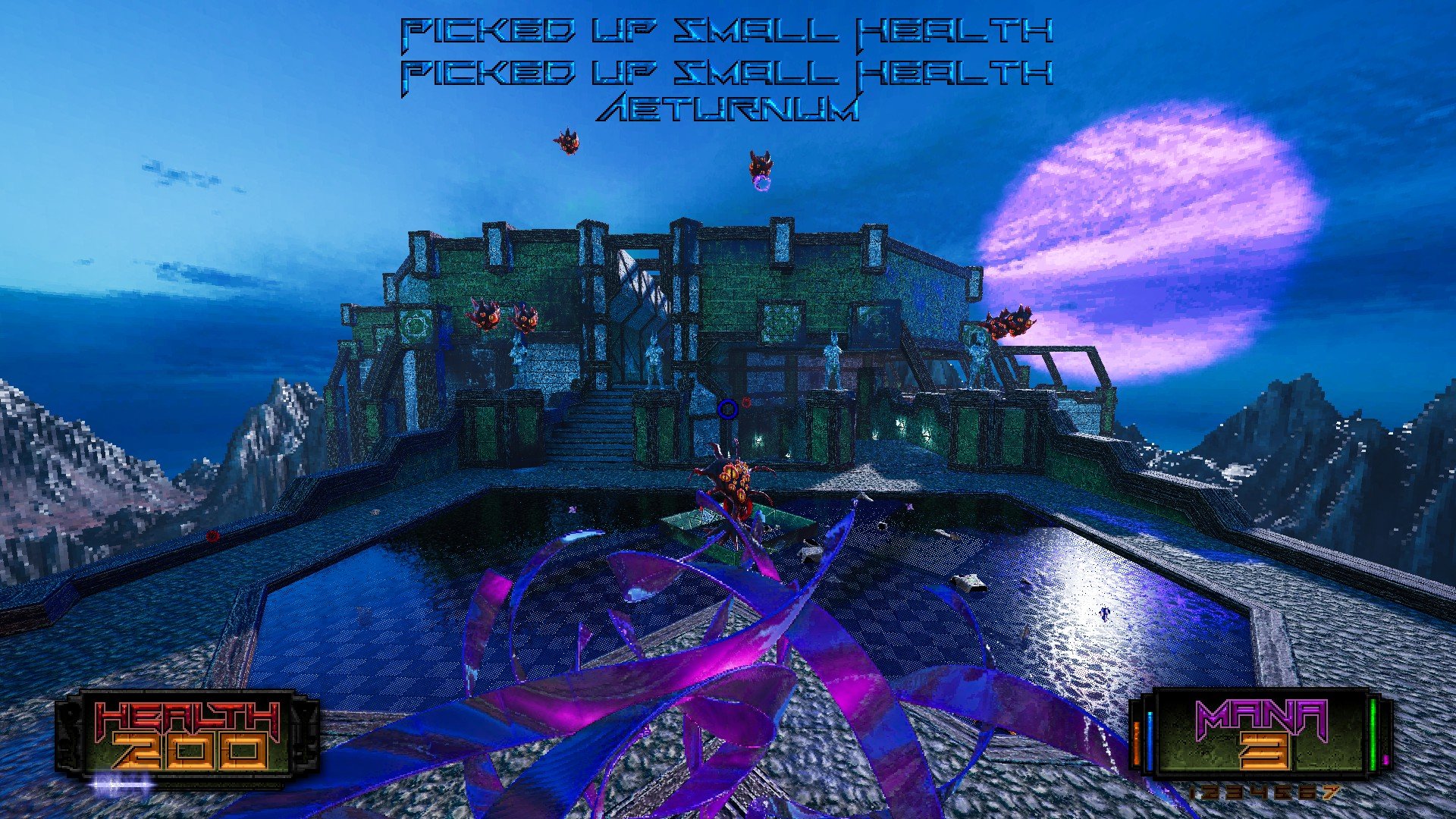 I have to make special mention of the enemies, as well, because they also follow the Doom blueprint to a tee. No one in Amid Evil is a hitscanning enemy, so you don’t have to worry about taking damage from afar while not knowing where your enemies might be. This is a heavily skill based game and understanding the movement of your character will see you succeed against overwhelming odds in a lot of scenarios.

That doesn’t mean Amid Evil is easy, though. Since this game puts more emphasis on enemy weaknesses, you can sometimes become swarmed with bastards and not react fast enough to the threat at hand. While using hotkeys to bring up specific weapons is great (Amid Evil also cribs this from Doom with the rocket launcher being on 5), I have to admit that even I struggled in a few areas because of the slower speed that your character changes weapons. It’s not maddening by any means (and can be mitigated with quicksave scumming), but sometimes you’ll get frustrated because your character doesn’t have a fire lit under him.

There are also some issues with collision detection in the environments. There is a lot of platforming in Amid Evil and occasionally you’ll get stuck on stairs that should let you glide up them. I also found points where I just stopped moving altogether as if hitting a wall. It’s never something that glitches you out or requires a restart, but it’s still aggravating none the less. 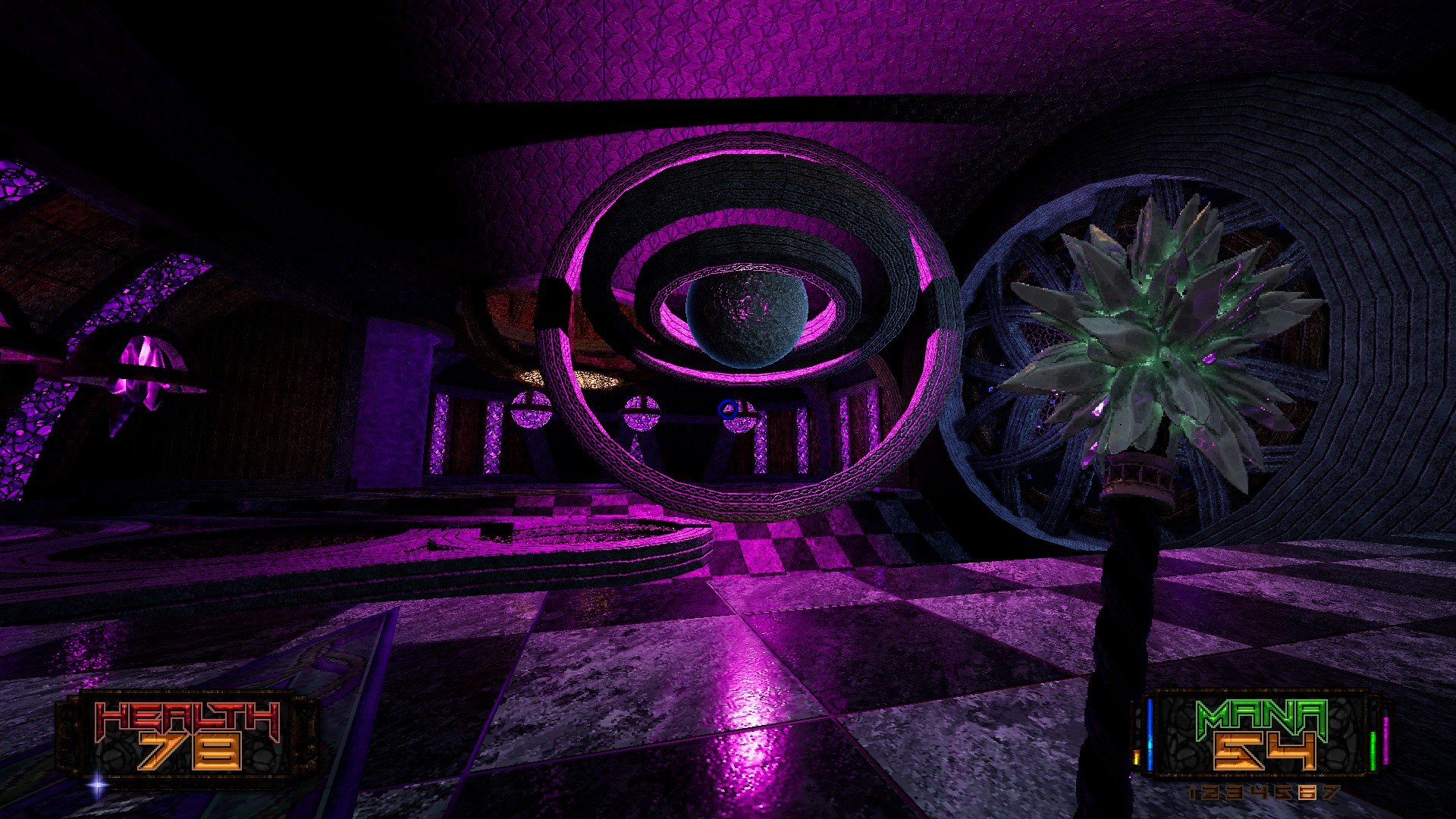 Amid Evil really doesn’t have any dealbreaking issues. The lack of multiplayer is disappointing, but it doesn’t hurt the campaign by any means. The endless horde-styled mode is fun, but doesn’t detract or enhance the experience in any way. I’d have to come up with nitpicks to start listing negatives, which isn’t productive or beneficial to anyone.

I’m not as over the moon as I was with DUSK, but that’s like saying you didn’t enjoy driving the Camaro as much as the Corvette. Obviously the sports car is nicer, sleeker, and prettier, but the muscle car is still a damn fine piece of machinery. Amid Evil is much the same. This is another wonderful FPS from New Blood that pays homage to and improves upon the past in all the ways you could hope for. Do you really need me to say anything else?