One might wonder if a game like Kingdoms of Amalur: Reckoning really needs a downloadable content expansion along the lines of “The Legend of Dead Kel,” given the enormous amount of quests and content already available in the core game. Quest and area exploration fatigue can start to kick in by the time you enter Klurikon, after all, and it’s likely you still have quite a few side-quests in your journal that you never bothered to complete.

It’s good to know, then, that “Dead Kel” goes above and beyond what you would expect from a piece of Reckoning DLC. 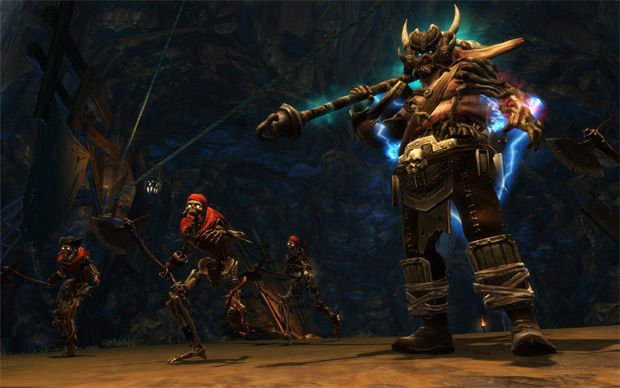 Dead Kel is somewhat of a notorious and undead scallywag, enough to deserve his own legend in Rathir. He has been raiding precious supply ships important to the war effort, so it’s up to you to embark on what sounds like a suicide mission; travel to the island of Gallows End from which no ship returns, and hunt down Dead Kel. As if your prospects couldn’t get any worse, you are accompanied by a new character, Captain Brattigan, who is as naive as she is a nymphomaniac who can’t swim, with a reputation of wrecking her ships to boot.

It comes as no surprise that you end up shipwrecked on the island of Gallows End, which isn’t quite worth calling a continent, but comparable in size to the desert lands of Detyre. You are not the first to crawl ashore on Gallows End like a drowned rat, as other shipwrecked survivors from decades past have carved out a living on the island in the form of the small village of Cape Solace. All is not right, however, as the village is full of zealots who are mysteriously tied to a deity named Akara, who protects them from the rage of Dead Kel.

The main quest of “The Legend of Dead Kel” is your standard Reckoning fare. You are sent to different locations on the island in your quest to find the dread pirate and a way home across the seas, and encounter a few of his boss henchmen in the process. Along the way, you learn more about the God Akara, the village’s history and religious rites, and unweave a few strands of Fate wherever you go. If you enjoyed Reckoning, you’ll simply find more of the same kind of combat and exploration in this DLC’s main quest. However, it’s the side-quests, additions to the Reckoning formula, and the small touches which provide the most, and more novel, forms of entertainment.

The side-quests provide some of the more humorous conversations and thought-provoking quests in the entire game, with many a darker and adult theme permeating life on Gallows End, even if these themes are ultimately not explored to their full potential. Messages in bottles can be found across the idyllic shipwreck island, and pieces of treasure maps can be found in chests to lead you to dig spots for shiny new loot. While the search for collectibles keeps you occupied and eager to explore, much of the fun in “Dead Kel” comes from the completely optional renovation of Gravehal Keep; a ruined fortress of the Dverga, a race of Dwarven mariners who last ruled the island.

The monster-infested Gravehal Keep looms over the Cape Solace, which can be claimed for your own. What is without a doubt the best addition to Reckoning is that you can upgrade and populate this ancient fortress to turn it into our own castle from which you can eventually rule like a king. 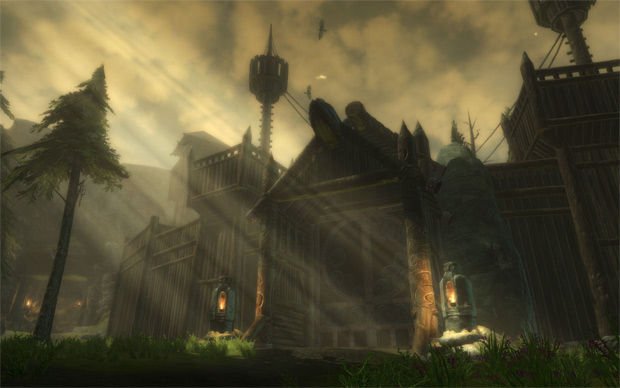 With each upgrade, which costs materials you’ll easily find while completing quests, a new wing or shop will open up and new NPCs will offer distractions. A scout can be sent off to collect various items and materials from unsalvaged wrecks, a combat trainer will present you with gold if you quickly kill creatures in a makeshift arena pen, and a bona fide animal trainer can provide you with pets if you supply him with meat, fish, and bugs.

These pets offer bonuses to your stats depending on which one you choose. Feed them some more food, and these bonuses will increase. It’s a silly bonus addition made sillier when you send the animal trainer to find and domesticate one of the new enemies in “Dead Kel,” the Root Golem. This is basically a troll, but a kind that can tunnel underground to move towards you, or grab Boggarts from below the earth to throws at you. Yes, it’s Maokai from League of Legends.

Eventually, Gravehal Keep offers a host of characters, like a librarian who will translate ancients books you find on your travels on Gallows End, NPCs on the island you can direct to seek safety in your keep to serve as shopkeepers and armorers, and other characters who will offer rewards you wouldn’t expect after having played through Reckoning. Some of it is fan service, while other elements such as being able to sit on the throne and listen to petitions make stabs at Fable III‘s end-game. The thing is, while the whole range of activities supplied by Gravehal Keep can feel a bit like doing fetch quests at times, much of it is supremely fulfilling to waste your time on, and a lot more entertaining than being the King ever was in Lionhead Studios’ “innovative” title. 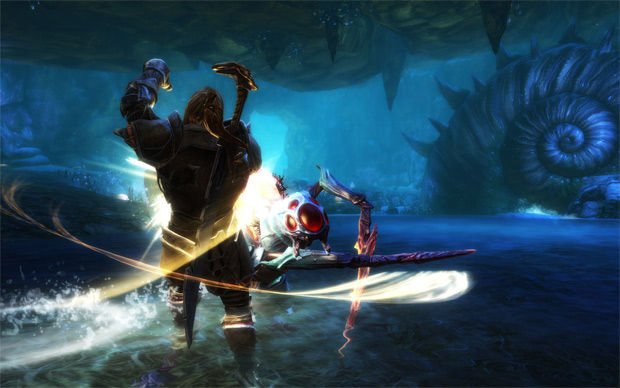 More than anything, “The Legend of Dead Kel” offers no shortage of fun and silliness. Captain Brattigan is crafted to be annoying with a high-pitched voice, yet you can’t help but come to like her. This is quite an achievement, since not many characters in Amalur are actually likable or even worth remembering the name of. (Go ahead, think of five memorable characters with actual clothes.) Gallows End becomes a home away from home in the world of Amalur, where the island’s areas aren’t just spaces to run through as you mop up quests in an efficient order, but instead become the locales where you found a hand inside a crab, or where you were asked to provide meat to feed chickens.

It experiments with additions we might see in the Amalur franchise down the line, and a sense that the developers working on the DLC had a lot of freedom to come up with, and flesh out, as many crazy ideas as they could. Unless they were directed to do so, which is arguably just as good.

On the downside, Dead Kel himself is remarkably boring. The story behind how his fate is tied to Gallows End is decent if unsurprising, but the resolution of the main quest leaves you unfulfilled and wondering if there couldn’t have been better ways to decide how Fate is inevitably disrupted by your hand. It’s hard to turn an undead pirate captain into the blandest part of an island adventure, but somehow they’ve managed to do so. 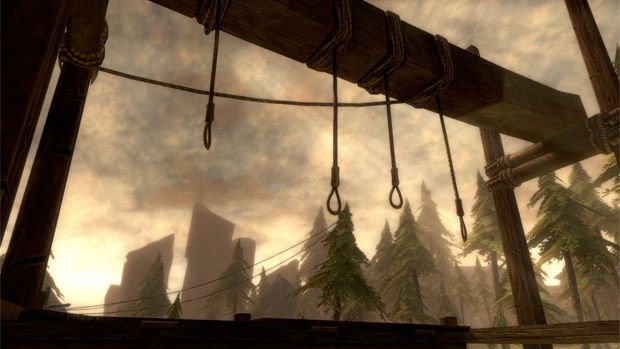 The new loot is a mixed bag, depending on how much you’ve already played Reckoning. Weapons are not as good as you may have already crafted or found, although some of the new items feature some cool new designs. For the loot-hunters, rings and amulets offer a safer better bet of finding improvements for your build of choice, as does the wealth of blacksmithing components you’ll collect throughout your adventures on Gallows End.

What could have easily been “just another bunch of quests on a new location” has been crafted into a variety of enjoyable elements to occupy yourself with. It’s quite long, too, easily taking you six hours or more to complete nearly everything there is to do on the new island. Moreover, it offers an excellent opportunity to try out a new build if you’ve been stocking up powerful equipment in your stash, but never bothered to commit to a full respec of your abilities before.

The additions to the Reckoning formula and the distinct style of the island of Gallows End serve to turn “The Legend of Dead Kel” into the DLC equivalent of a tropical island vacation. It’s a fun trip to a relaxing setting far away from the Crystal War, which lets you explore yet another piece of the Amalur’s world at your leisure.