Survival of the shittest

When the makers of Alien vs. Predator: Evolution saw the negative press and subsequent fallout regarding Aliens: Colonial Marines, they must have laughed. I imagine them bellowing obnoxiously, roaring their gleeful approval that no matter what their game will be like, there’s no way it could be considered anywhere near as bad.

Sadly, these hypothetical developers are wholly mistaken. Evolution is ironically titled, as backward and inefficient as it is. It manages to do the seemingly impossible and rival Colonial Marines in its awfulness. Just when Aliens fans thought things could only get better, along comes Angry Mob Games to demonstrate that, no, the franchise isn’t done being pissed on yet.

In fact, the flood’s only just begun. 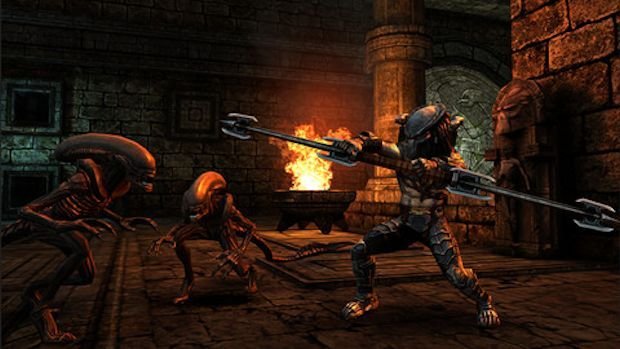 AvP: Evolution is a fairly unremarkable beat ’em up at its core, giving players a Xenomorph and a Predator with which to carve slices out of human soldiers and, occasionally, each other. Its campaign regularly swaps out the two alien creatures, with short and simple missions that usually involve clearing several rooms of enemies and moving on.

Combat is a simplistic affair, consisting of unremarkable combos chained together by virtual button taps, and executions carried out on weakened enemies through fundamental quick-time-event sequences (basically just swiping the screen). As a Xenomorph, players strike with claws and tail, while the Predator gets to use blades and ranged weaponry. As each character earns points, it can unlock new body or armor parts to enhance attributes, and a few new abilities such as counter attacks or temporary “rage” statuses.

As you may expect, the level system allows Evolution to make liberal use of in-app purchases, allowing you to trade real-world money for more Xeno or Honor points. Fortunately, the campaign and side missions can be used to farm these points for free, and doing so isn’t that huge of a grind. Nevertheless, the game does what it can to entice you with microtransactions — not that it could ever be considered good enough to come close to tempting. 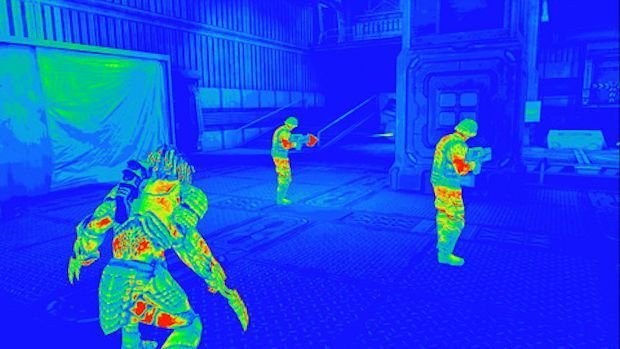 The biggest issue with Evolution is that it’s disgustingly sloppy. To call the combat braindead would practically be praising it, given it’s a sluggish, repetitive, utterly undemanding case of prodding the screen until everything’s dead. Execution animations are canned and unvaried, accompanied by irritating sound effects. Attacks are as slow as they are unresponsive, many of the QTEs often failing to register, and the framerate is so inconsistent the game regularly fails to recognize your combo input.

An awkward camera and unwieldy movement controls add to the frustration, especially once the game starts trying to include stealth missions and awful first-person vent sequences that feel like trying to catch a greased watermelon in a bathtub of liquid butter. Graphical glitches aren’t uncommon, and sometimes the game gives up trying to be a game entirely and just fills a room with an overwhelming amount of enemies in the hopes of being challenging.

No thought has been given to balance. Executions are important, as they refill health and kill enemies quickly, but surrounding opponents can continue to attack during the animation sequence and are regularly able to send you back to a checkpoint while you’re trapped in a grappling QTE. Some areas are trial-and-error of the worst kind, requiring progress through a certain route but forcing you to learn that route by reloading a checkpoint time and time again. The Predator’s weapons are slow to charge and regularly fail to lock-on to targets, rendering them largely impractical. Most of the special abilities are pointless, in fact, at best doing little to the enemy forces, and at worst leaving players vulnerable to attack. 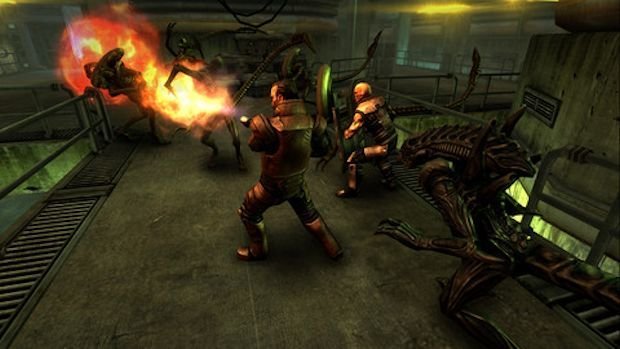 I gave up on the campaign during a sequence that dropped the framerate so badly, I couldn’t chain a single attack, while surrounded by opponents who repeatedly pummeled me to death. This is not a one-off occurrence, either. The game struggles to respond to the simplest commands, and even when it does, player characters are so slow to act the enemies usually get a cheap jab or two in the moment you try and do anything. Another favorite tactic is for the marines to box the player into a corner and simply poke their victim to death. The whole thing’s a mess, and success is more down to luck than anything approaching skill.

The upsetting thing is that Evolution looks like it could, with effort, be a good game. The fundamental ideas at play are all workable, and if the game controlled well and had a bit more nuance to it, the tools are there for a genuinely fun brawler. Little touches, like an execution in which the Xenomorph pulls out a Facehugger and practically pie-faces an enemy with it, are pretty damn amusing, but ultimately serve to showcase what a massive waste of potential the whole thing is.

That’s what Alien vs. Predator: Evolution is. A waste. A waste of potential, a waste of time, and definitely a waste of money. At least it feels more finished than Colonial Marines did, but that doesn’t stop it being equally as bad. Simply trying to move around the environment or land a single attack is a constant, unreliable frustration, and it’s not down to the touch controls. I’ve played 3D touch-controlled brawlers before, and there are far better ones than this. This was just badly made. 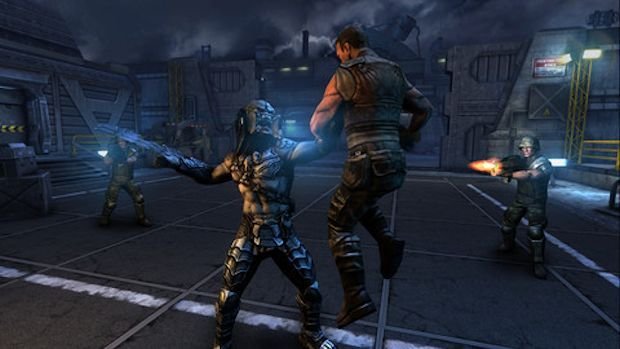 In fact, as I think about it, I have to give the devil his due. AvP: Evolution is actually worse than Colonial Marines — ever so slightly worse. At least getting from A to B in Gearbox’s insulting mess was relatively stress-free and didn’t cause me to want to break something. For that roaring triumph, Colonial Marines now gets to enjoy not being the worst Aliens game to be released this year.

Congratulations to AvP: Evolution! You’ve managed to be marginally worse than an unfinished, buggy, outsourced piece of trash. You must be very proud.