From the old school “20th Century Fox” opening to the first few seconds, Alien: Isolation wants you to know that it takes after the first film from the series it was based on. One alien, one spaceship, one chance at survival.

This is the game we should have gotten from Gearbox. 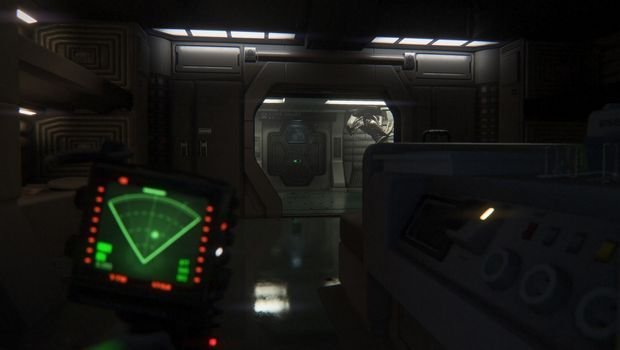 Alien: Isolation takes place 15 years after the first Alien film and before Aliens. It follows the tale of Amanda Ripley, daughter of legendary Ellen Ripley — the woman who took on a Xenomorph and lived to tell the tale. Unlike her mother who eventually became more of a soldier, Amanda is still just an engineer who is still searching for her mother, who mysteriously disappeared aboard the Nostromo. What starts off as a routine mission to investigate the flight recorder ends up resulting in Amanda and her crew getting stranded on yet another ship, kicking off the game proper.

What I like about Amanda as a character is that she fits into the franchise rather well, with an interesting enough backstory giving her a reason to be there. She’s hardened in a different way compared to her mother, having experienced space travel far longer than a lot of her peers, allowing her a certain amount of confidence. On the flipside, Amanda’s character isn’t pushed as heavily on us as you’d expect. Rather than constantly have her making lengthy expositions, we’re meant to experience the game with Amanda, like we’re both getting through the ordeal together.

The campaign is ostensibly a first-person adventure game with mild action elements. You’re not alone as you have a small cast of supporting characters to interact with occasionally, but they don’t get in the way — make no mistake, survival is at the forefront of Isolation, in a good way. There’s a focus on small-scale puzzles, either in the form of locating certain objectives on your own, solving small scavenger hunts, or completing minigames while the world is still operating around you.

Isolation doesn’t go out of its way to spoil solutions or over-explain anything, which should delight people who are tired of constant HUD-based objective markers that detail how many meters you are away from the next bread crumb on the trail. The map strikes a perfect balance of ushering players into the next portion of the story without giving everything away.

There are also terminals that provide more highlighted areas just like Metroid, and the ship in general is a ton of fun to get lost in — I felt compelled to just wander around and find extra materials. In fact the game is anything but linear outside of story progression, as you can freely explore areas, return to past zones with new tools, and generally just scavenge around at any time.

And you’ll need to scavenge, as Isolation feels like an old school survival horror game with regard to item management. At the heart of this mechanic is the crafting system, which lets you build items like flashbangs, medkits, noise makers, and flares. Since the game is so challenging, you’ll feel like you need to craft and locate materials, and minor pickups feel like small victories.

Even your flashlight (which is head-mounted) has a drawback, as batteries drain rather quickly and you’ll have to locate spares. It really feels like Resident Evil 1 again where every item matters. While there are a few offensive tools at your disposal (such as a revolver and molotov cocktails), the core focus is decidedly defensive, as you won’t come across a whole lot of ammo. Less is more in this instance, and you won’t take using precious bullets lightly. But while the survival portions of Isolation are well done, the atmosphere is where the development team really nailed it. This feels like Alien incarnate, like you were dropped right onto the film set.

The smoke, the details of particles in the air, the equipment — the art team went above and beyond here. I love just walking around taking in the sights because it feels so authentic, like you are a part of the universe. On higher-end platforms the detail shines even more — we’ve progressed to the point where you can clearly see writing on small objects like calendars and notes, all of which add to the magic. Tiny things like notes and audio logs from PCs are also a nice touch. Yes, the atmosphere and tension holds up throughout the entire game. 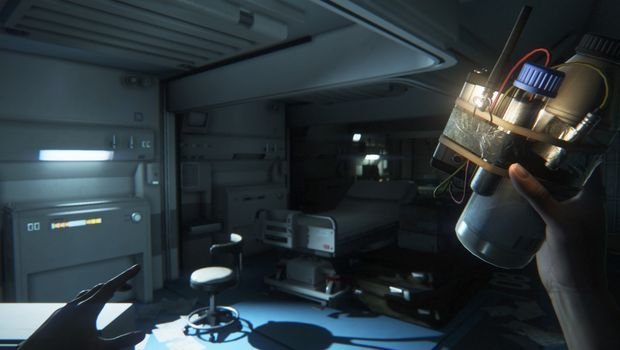 If you’re worried about the game being all jump scares — don’t be. Isolation has its fair share of jumps, but it gets off on building its tension with a steady pace. Whether it’s chilling bits of the game’s soundtrack or classic horror movie sounds, odds are you’ll be feeling a bit on edge the entire time. As previously mentioned, the atmosphere is incredible, and the ominous art direction keeps you guessing throughout. Playing in the dark with surround-enabled headphones only amplifies the experience.

So, what about arguably the biggest part of the game — the alien! Isolation features a Xenomorph — yes one — in all its glory, mostly modeled after the style in the first film. Creative Assembly really tried to give us the sense that the alien learned new tactics as the game went on and had a host of formidable tricks up its sleeve. I have to say, they succeeded. While it sounds like an overstatement, the alien was one of the most interesting AIs I’ve seen in a long time.

At first, I thought it was entirely scripted. While some cinematic portions do play out in the same manner every time à la BioShock, the actual alien is quite dynamic. There was one point in the game where I called for an elevator, and I heard the alien hiss in the distance. I thought, “Hey, this is scripted; I’ll just wait here and I’ll be fine” — nope! The bugger actually turned the corner, saw me, and popped my skull open. On the next spawn, I hid behind a stack of barrels and he didn’t even enter the room. Almost immediately, I saw that this concept had potential.

In another area entirely, I walked through a door and never thought to lock it behind me, thinking “This area is pretty far off the beaten path; it won’t follow me in here.” Wrong again! It promptly turned around (likely due to some noise I made), then followed me into the room where I hid in a locker, nervously watching it walk by with its tail slithering on the ground. To give you a visual example of the options that the alien can take in any given spawn, check out this crude diagram. 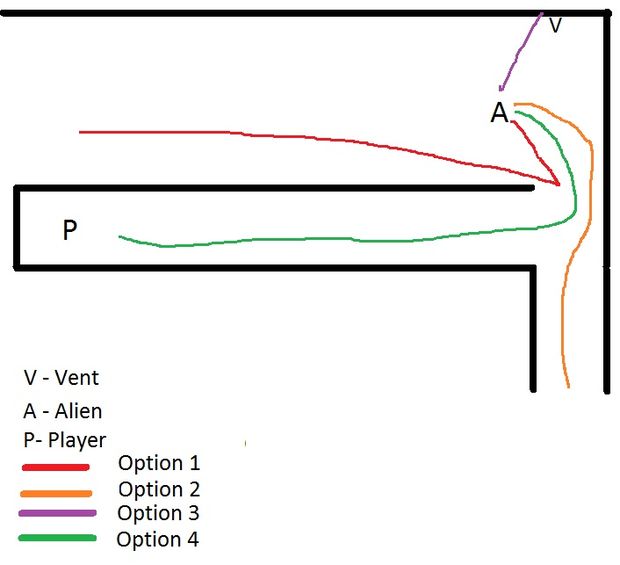 You can use the alien to your advantage as well, clearing out unwanted hostiles and distracting it to suit your needs. Likewise, you’ll have to adapt to it on a constant basis, as it won’t always fall for your parlor tricks. Figuring out new ways to outwit the alien with a clever use of tools is paramount to your success. In that regard, Isolation does a damn good job of making you feel vulnerable. Even without the alien being physically present in any given area, it reminded me of the Nemesis from Resident Evil 3. It might not be there but the threat is, which is another welcomed layer entirely.

As you may have heard, there are human enemies too. Thankfully these portions actually are few and far between and actually aren’t that bad at all, even if they’re nowhere near as entertaining as when the alien is on the prowl (though they aren’t mutually exclusive). You do have a melee option (that will do absolute jack-all to the alien) to initiate some stealth kills, but again, you can sneak past most of these enemies just fine. They also never go overboard with this — there are no “wave-based” forced killing spree sections like the new Tomb Raider and BioShock: Infinite.

There are a few frustrating sections though, mostly involving the presence of humans. Said frustration mostly stems from the no-nonsense save system, which only saves when you manually interact with a save point, littered randomly about the game’s world. There are some sections that have very difficult stealth sections that are roughly five minutes long, and failure of any kind usually results in death. Old school PC gamers who remember titles that lacked a quicksave feature will likely be unfazed, but it’s something to be aware of — especially when the alien can always kill you instantly, leaving little margin for error.

On the other hand, to make up for the familiar human-on-human confrontations, synthetic robots are masterfully injected in a few areas — and man, they are creepy as hell. Devoid of emotion, these robots are more deliberate in their movements. They’re slow and zombie-like, speedwalking their way in a delightfully terrifying fashion. They’re much more ominous and fun to interact with, especially given the fact that they can take a beating (just like the films) and keep on going. 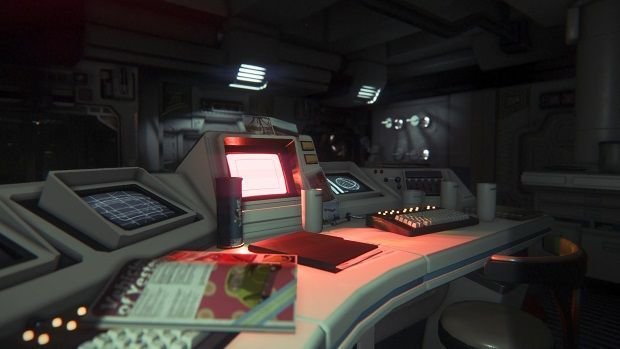 If you’re so inclined after the roughly 15 hour (or more) story mode, you can tackle the Survivor mode portion, which is basically a challenge room type deal. You’ll be timed and get an appropriate score for achieving certain bonus objectives, all while you evade the terrifying alien in a toe-to-toe matchup. With a limited toolset, you’ll have to outwit the creature and make it to the objective in the fastest time possible for leaderboard purposes.

It’s basically the best part of the game, distilled. The single included map is static, but every time you play it, it will feel different. One time, I found myself sprinting to a door to lock it behind me, stopping the alien right before it could get in, freeing up about 20 precious seconds before it found its way back to the level through the vent system. The very next run, it bypassed the door entirely before I could get there and was lurking on a staircase right above me. This is the kind of randomness challenge modes should strive for.

Sadly, Survivor mode will only ship with one map, with the rest arriving as DLC. It’s a shame because it showcases what makes the game so special so concisely, and it’s the perfect thing to show someone in the dead of night in a dark room with headphones.

Halfway into playing Alien: Isolation, I stopped to watch the first four Alien movies again. It wasn’t just for research purposes, but mostly because the game had me yearning for more of the universe. Isolation has some flaws, but it’s faithful to the film series, and I’d love to see a follow-up with a few extra alien evolutions.