Show me how you strip

The Akiba’s Trip series is one that I think many people know based on premise alone. It has never reviewed very well in the West, but it’s hard to ignore a game whose central mechanic is undressing people in Akihabara. Undressing people. Stripping them to the nude. Putting them in their flesh tuxedo. They’ve even contrived a reason to do so, but we’ll get to that.

We never got the original Akiba’s Trip over here in North America. It was originally released in 2011 on the PSP, which was close enough to the launch of the Vita to be ignored. Instead, we jumped straight into the sequel, Akiba’s Trip: Undead & Undressed.

Now, however, we’re getting a chance to travel back to 2011’s Akihabara with Akiba’s Trip: Hellbound & Debriefed (oh, I get it, “HD”) and see how the stripping began. Let’s address the whole “HD” part of this package. Akiba’s Trip was a mighty fine-looking PSP game for its time. It is not, however, a good-looking Switch, PS4, or PC game. Models are angular, textures are blurry, and if you look too far off, you can see the cars disappear into the 2D backdrops. It’s an improvement over the original, don’t get me wrong. Textures and lighting have been touched up, but they didn’t go as far as even matching Undead & Undressed’s graphical fidelity.

Even still, the framerate tends to chug on the Switch version when you position the camera just right or there’s lots of stripping going on. I never found it too intrusive, but it was hard to ignore.

That’s not the end of the world, but it doesn’t bode well for any other upgrades. Indeed, the combat, which has been a sticking point for the series in general, is just as clunky as ever. The idea is that you have to damage the enemy’s clothing before you can rip it off, exposing their supple flesh to the world. There’s headwear, upper body, and lower body, and they are all worn down with their individual attacks. As such, you have high, mid, and low attacks, but they can’t be chained together in any advantageous way, so you’re stuck with just kicking them in the shins until their pants break.

The biggest issue is the targeting, which is essentially non-existent. You can’t lock on, so you’re at the mercy of your character’s attention span, and they’re easily distracted. Even when fighting only one enemy, you’ll often find yourself attacking off to the side for no reason, or striking behind your target. In groups, things can get hopeless, and kamisama help anyone who joins you as an ally. Just flail in the direction of the enemies you want to strip and start tearing every once and a while. See what you can catch.

The whole reason for the stripping? Akiba’s Trip tells you it’s because there are vampires preying on the citizens of Akihabara, but it gets a little murky. You’re turned vampire at the outset, so you’re just as susceptible to sunlight as everyone else. Lose your clothes, and you dissolve. Take off a vampire’s outfit, and they dissolve. Strip a bystander, and they just run off in embarrassment.

The weird thing is, the story isn’t all that committed to this concept. It plays along with the whole hidden threat angle, but often when you strip a character with a name, they’re just like, “Hah, I’m too tough to be killed by the sun!” Then they run off because no one has heard of restraints. You can also just strip down to a pair of headphones and be perfectly fine. As long as you’re wearing an article of clothing, the sun can’t hurt you. Your underwear doesn’t count. Thankfully?

Why are all these vampires out in the daylight, anyway? Have they never heard of coffins? I’m pretty sure Akihabara has a nightlife to prey on. The story of Akiba’s Trip: Hellbound and Debriefed involves you investigating the disappearance of a friend and getting beaten up in an alley. A woman takes pity on you and shares her blood with you by way of a kiss, and you become a vampire — sorry, Shadow Soul — like her. An organization dedicated to the eradication of Shadow Souls, NIRO, recruits you by force to stop their diabolical scheme.

The plan? Vampire bites apparently turn people into shut-ins. It’s not very well explained, but from what I gather, I may have been a victim of these Shadow Souls. I’m also not really certain of the grand plan. Drive down human birth rates in Japan so vampires can thrive? I’m not sure they need help with that, especially not in Akihabara.

I poke fun at some of the more nebulous elements, but the foundation does a decent job of moving things along. While it seems from the outset that NIRO has you by the crotch of the pants, as the plot moves along, you’re given some agency in who you help. Your primary concern is protecting the people of the Tokyo neighborhood, but who has its best interests in mind? Is it really NIRO? Are all vampires bad? Likewise, the characters are enjoyable, if not a fair bit archetypal. It does tend to get a bit overly wordy, especially towards the end. There’s a possible romance in the game that I enjoyed, but every so often she’d start to drop analogies that I just didn’t understand. I’m sorry, but an analogy is supposed to clarify a subject, not mystify it further. Poor use of poetic license is a turn-off for me.

At its core, Akiba’s Trip is about being an otaku, which I guess also means being a pervert. Throughout the game, you’ll be subjected to fetishes laid bare. I consider myself to be pretty open-minded, but I found myself feeling somewhat uncomfortable when I had to utilize the protagonist’s little sister to awaken a schoolgirl fantasy in him. Likewise, when I had to find a “cherry” on the street, deceive her, and deliver her to the local BDSM queen, I kind of felt a bit disconnected. But the game rewarded me for being a predator! Not sure what message that sends.

It’s nothing worse than you’d find in some of the lewder anime out there, just be ready to dip your toes into other people’s kinks. Some that you might not be into, but others that you might be! What’s your game, friend? Crossplay, maids, moe, catgirls, bunny girls, fox girls? You’re covered. Just don’t be surprised when it skirts a little near sexual assault territory, as if the core theme wasn’t close enough. 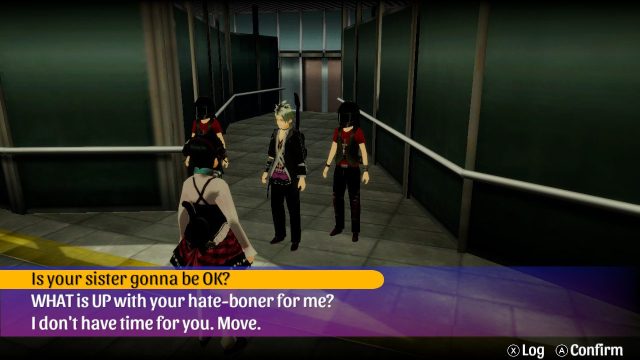 Most of the time, though, it’s like playing a stripped-down version of Yakuza. You wander a Japanese neighborhood, shop, do side-quests, build up your character, much like in that venerated series. But then the combat sucks and the story is poorly paced. On the other hand, I can’t deny it grew on me. It feels like one of those janky, Japanese, early PS2 titles like Mr. Mosquito or Robot Alchemic Drive. It might not be the most fun to play, but it’s unique enough to captivate.