Way back through the mists of time — 1990 to be precise — fans of the relatively new RTS genre were treated to what is sometimes retroactively considered to be one of the world’s first MOBAs, Herzog Zwei. Players commanded a flying, transforming mech that could both fight and airlift units to different parts of the battlefield. Despite its later cult status, the title didn’t perform very well in North America, though it was slightly more successful in Europe, but not enough to stop it from becoming an evolutionary dead end. Until now, that is.

AirMech is very much the child of Herzog Zwei, and its creator has cited the ’90s RTS as the main inspiration for this free-to-play mech-focussed MOBA. This spiritual successor is somewhat more welcoming than its predecessor, and is not as micromanagement intensive; It’s very much a product of the times, yet it still captures what made the cult classic so compelling over 20 years ago.

AirMech tasks players with controlling an airborne mech that can rapidly transform into a giant walking murder machine. Armed with guns, rockets, or even a laser sword and shield, it patrols the colorful battlefields of the future looking for explosive scraps to dive into. It’s all about these self-contained battles, and forgoes a single-player campaign entirely — though it certainly isn’t any worse off for this.

It’s a predominantly multiplayer affair, with combatants facing off against individual opponents or opposing teams in a war to control maps filled with bases, some of which are defended by the AI. Players can opt to fight in a match against the AI, either on their own or with a partner, but beyond learning the ropes or testing out new loadouts, there isn’t much reason to fight against these computer-controlled enemies — they aren’t too bright.

Battling other people, that’s what it’s all about. It’s a frantic, often chaotic experience that offers no downtime and constant, dizzying action. Players zip around the map, grabbing units, dumping them near enemy bases, in the middle of a shoot-out, or ordering them to patrol areas, capture outposts, or attack the enemy’s gigantic, heavily-armored base. Or they might just turn into a big ol’ robot and kick the living daylights out of some smaller, poor, unfortunate robots. 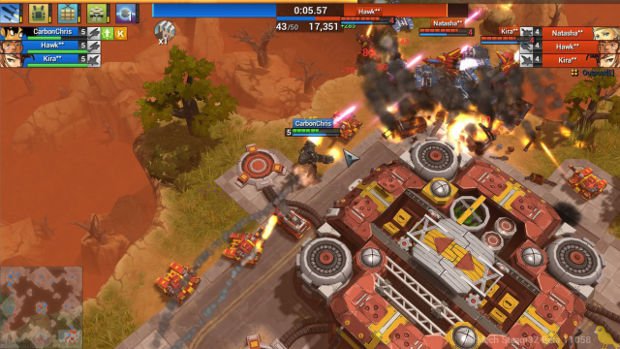 To capture an outpost — which is essentially a factory — its inhabitants much be destroyed by attacking the building itself, then robotic troops have to be sent in to capture each node within it. Unlike vehicles, soldiers cannot be given orders, and are only ever static if you attach them to an outpost. The rest of the time they are constantly forcing their way forward, shooting everything in sight, as they make their way to the nearest building.

On their own, these troops can be very vulnerable, but are some of the most important units in the game — so it’s a good idea to shield them from harm by providing them with a more stalwart escort. However, the loss of these units is easy to get over, as they are constantly being churned out automatically and can even be built by the player.

There’s only one main resource which requires players to keep an eye on: money. Cash is used to buy more troops and units, and is provided by outposts and augmented by money generators that can be added to a player’s loadout, but only if they’ve already purchased them. Even if you are filthy stinking rich — wealthy enough to wear a top hat and monocle — you’re still limited by a population cap. However, this cap can be increased by selecting particular pilots or using certain items. 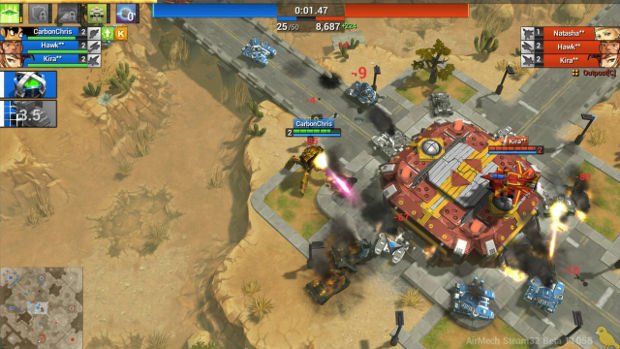 The AirMechs, of which there are many to choose from, have special abilities that can be accessed when you level up in a match. Depending on the mech, these could allow you to heal units, shoot missiles, wield melee weapons, or airlift more precious gun-wielding cargo. The mechs are further differentiated by their speed, damage, and hardiness. Their abilities are limited by fuel, though, and when that runs out they will become slower, unable to carry units, or use their powers. Replenishing the fuel supply is as easy as going back to an outpost. Health can be regenerated in the same way.

I’ve become rather partial to the Osprey mech, myself. It’s a support mech that can heal units as well as carry more. I get a great deal of delight from dropping four tanks near an enemy outpost and watching as foes attempt to dispatch them to no avail. They could just attack me, since I’m the one healing them, but people can be silly.

New AirMechs, pilots, units, and items can be purchased in the store between bouts. There’s a great deal of variety on offer, and there’s always something on trial which allows players to use them temporarily without spending any kudos — the game’s currency. Kudos can be earned merely by participating, though players obviously earn more for a victory. Giving people a little boost are quests that, upon completion, confer a small amount of kudos. They are simple things like “reach x level” or “kill x number of y,” so they aren’t particularly interesting, but they do give a slight sense of progression and should please those who are goal orientated. 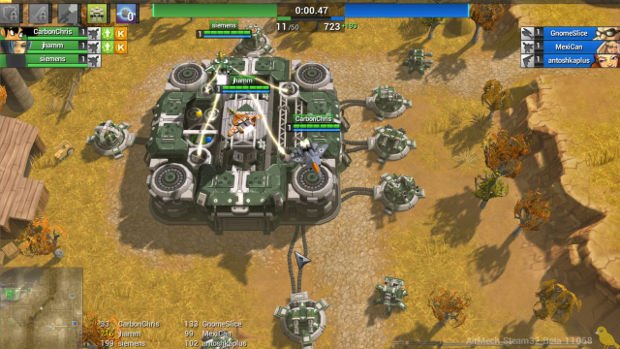 There are quite a lot of things that can only be purchased by paying players through diamonds, a currency unavailable to the unwashed masses. Unfortunately, they are far from merely cosmetic, but they don’t necessarily provide an unfair advantage for those who are willing to part with their cash. Rather, they give these players more options and hasten their progress. Using a F2P account, I did feel that I wasn’t really earning as much kudos as I would have expected given that I’ve only lost one battle, but I did earn enough for my Osprey and some more units — including the terrifying explosive Creepers from Minecraft, of all things — which I’ve been enjoying immensely.

The plethora of options available to all players means that there are a hell of a lot of strategies to learn and experiment with. Part of the joy is in testing out new loadouts or experimenting how well they work in tandem with the loadouts of teammates. With that in mind, AirMech definitely benefits from playing with a friend, or even just someone you can communicate more easily with even if you secretly hate them. It’s certainly possible to enjoy the experience with a silent partner, just not optimal.

As with any multiplayer RTS, there will never be an end to people debating balance. Thankfully, thus far I’ve not seen any tactic, mech, or unit that doesn’t have some sort of weakness that can be exploited. One particular tactic that you will see time and time again is, unsurprisingly, turtling.

Turrets are available right from the get go and are easy to build very quickly. Having the ability to take out both land and air targets makes them pesky, indeed. In at least half of my scraps, I’ve found that my opponents will surround their entire base with these things, meaning that it’s almost instant death for anyone unfortunate enough to get close. Luckily, many maps place bases not quite at the edge of the map, so there’s often a tiny spot of land just behind the base. 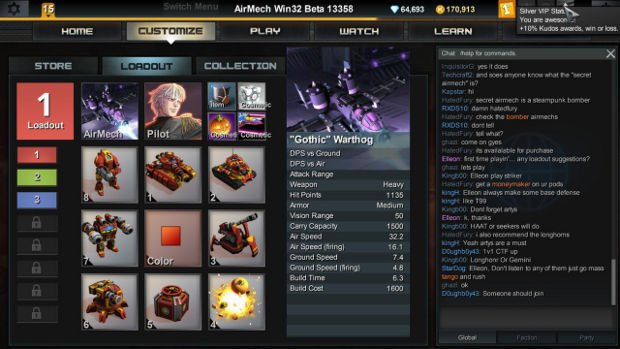 When my enemy is being a bit boring, I respond by just shuttling unit after unit to that tiny, innocuous spot at the back of their base. Of course, these units rarely last for more than a few seconds, but do this for a couple of minutes and there’s a good chance you’ll snatch a victory. It’s certainly not as much fun to play that way, but that’s just what battles sometimes devolve into. Not before, I should add, there’s plenty of fighting over outposts and crazed, explosive, shrapnel-flying fun, though.

The maps are truly wonderful creations, encouraging lots of different tactics while funneling players and their units towards each other’s bases through dangerous choke points, turret-defended outposts, and forested areas where enemy squads may be lying in wait. Some places are only accessible via flight, so opponents will have to actively airlift units there to take them over, and some outposts sit snug in craters, their defenses constantly attacking the troops slowly making their way around to the single entrance point.

Despite being filled with multiple avenues for attack and encouraging multiple strategies, the maps are never particularly large. A few games on one map will reveal a lot of its twists, thus players learn quickly. 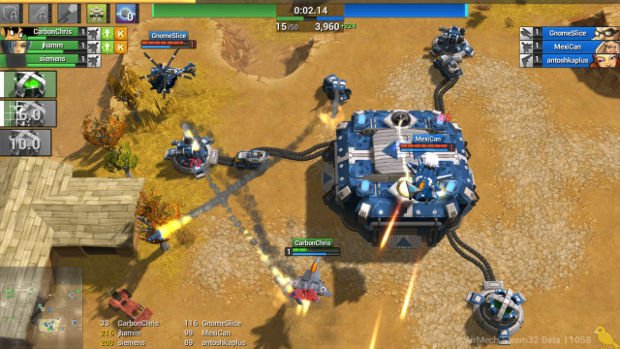 It is the fantastic momentum that really makes AirMech shine. There’s never a moment of respite, as your forces are continually trying to capture areas, which inevitably leads to constant conflict with one’s opponents. Whether you’re healing a tank, airlifting troops into a contested area, blowing up buildings, shooting down missiles headed straight for your arse, or going toe-to-toe with an enemy mech, you’re always utterly focused on the battle.

So, you can imagine how annoying it might be to be hit by some serious lag. Very bloody annoying. Lamentably, it happens a lot. In fact, I haven’t played more than maybe five battles where lag wasn’t an issue, and if anyone is suffering from it, all players suffer. At first I thought it was an issue at my end, but then I noticed that much of the time the game said I was stable, and it was somebody else causing everything to come grinding to a halt for a second or two. It may be an issue with the net code, or I could just be extremely unlucky. Regardless, it’s been rather irritating.

Besides the lag my experience has been fortuitously free of issues. The developer is very hands-on and seems to work actively with players to solve problems, both on the Steam forums as well as Carbon Games’ own forum.

If you’re even remotely interested in MOBAs or RTSs, then you’ll be doing yourself a great favor by downloading AirMech and firing it up. It succeeds in building on the solid foundation laid by Herzog Zwei over 20 years ago, while simultaneously feeling modern and fresh. Now, I need to get back to the game so I can eventually buy a UFO that transforms into a giant mechanical spider. Abductions here I come!