If you want to make it to the top of the iPhone App Store, it seems that the more birds your game has, the better it will sell. That is, if the gameplay itself is engaging, addictive, and fun.

Enter Air Penguin, the new #1 iPhone game on the App Store. Air Penguin certainly has a bird — a fat penguin, no less — but is it really that addictive and fun?

Korean developer Enterfly’s game centers around a penguin who, for some reason, cannot swim. Because he’s one fat, Antarctic bird, he has to bounce from floe to floe, ride sea turtles, and sometimes “fly” to the top of a level. And should you fall into the water, you slowly sink to the bottom and die. Poor penguin.

This is a pure, tilt-control game, so if you don’t care for those you can stop reading right now.  You can reset the tilt at the start of a level or through a pause menu, and while the controls work well when you hold down your iPhone or iPod Touch, it’s very hard to effectively control it when you’re holding the device in any way but the one way that works for you.

The titular penguin bounces automatically, meaning you tilt your device to make it land on floes and bounce onwards to the next piece of solid “ground.” Sometimes you can land on a large sheet of snow-covered ice that lets you slide across it — tilting left and right to evade holes and obstacles like a walrus, or land on a turtle and ride it to safety. 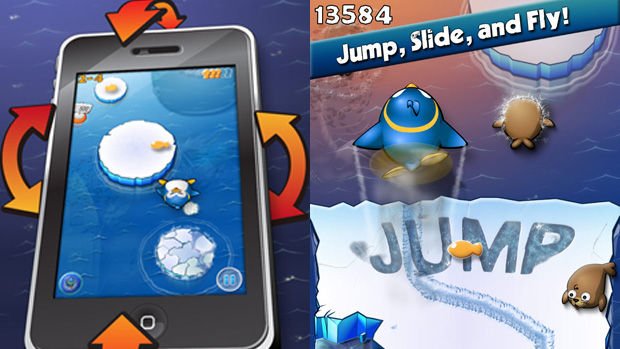 While trying to reach the finish at the top of a level, there are five fish to collect on the way. Collecting these fish becomes the game’s main draw unless you just want to get to the end of a level, and it becomes pretty challenging as you progress. Sometimes a fish is in the air and you only have to move over them to collect one. Other times, these fish lie on the ground, forcing you to either make ground contact or bounce precisely at the right moment to grab the fish on your way down or up.

As you collect these fish, you also create a stockpile of fish that you can use to buy certain lifesavers — for lack of a better word. Spend ten fish to get an extra life if you fall into the water, enabling you to jump out and continue your path. Spend more fish on bonuses that stun sharks that can eat you, slow down flying fish, etc. If you run out of fish, you can always buy more through the in-game store, which is probably how the game is trying to generate extra revenue.

Air Penguin offers a lot of levels and if you are a collectionist you’ll find plenty of content to hold you over. Levels become progressively harder and you’ll encounter sharks and other Antarctic-themed creatures along the way to either kill you or bump you off-course — usually also killing you.

A survival mode allows you to play with some of the game’s more advanced features while trying to get as far as possible, such as flying large distances through the air by twisting the penguins feet around like a propeller. You shouldn’t really think about how this is physically possible, although it does explain the penguin’s inability to walk normally throughout the entire game.

Some of the other popular mobile games like Angry Birds and Tiny Wings can make you scream at the screen in frustration if you mess up at a key moment, and Air Penguin is no exception in this regard. The question is whether it causes you to scream at it in a good way, enticing you to keep on playing, or in a way that just makes you tilt the device across the room. 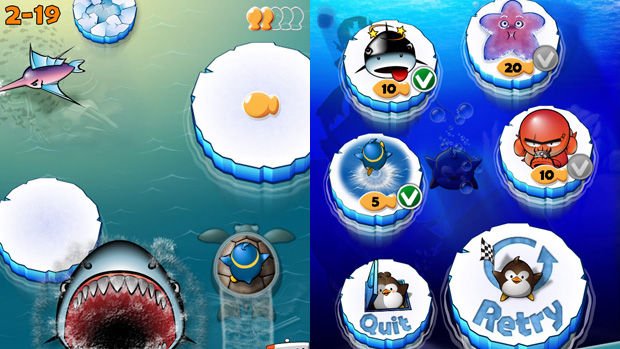 For me, it was a mix of both my inability to master the controls and being awful at it. I could only really play it with the device in a position where the tilt was set in such a way that it became easy to use — like holding it horizontal or holding it with both hands. But holding it in any other way (lying in bed or on a couch, for instance) made it nearly uncontrollable. If you are a smoker, hungover, or a recovering meth addict: good luck holding the device still.

When you do find the sweet spot that works for you, however, it does work remarkably well. You’ll bounce from place to place easily, learn how to collect all the fish without falling in the water, and occasionally screw up and curse at the screen when you hit something. And you’ll keep on retrying a level until you pass it, which is a testament to the game’s engagement factor.

I let my mother (a non-gamer) play this over Easter, and while it took a couple of minutes to understand the controls, she kept on retrying the game whenever she died; it has that one-more-try fun factor. If you don’t care for tilt controls in general or don’t want to waggle your iDevice around in public, though, you are not going to play this game much.

Air Penguin is a great and fun game for children who have mastered basic motor controls, and it’s a very family friendly game with a lot of value. It’s definitely not a game for everyone, mostly because of the controls, and I’m not sure how long it will stay in the iPhone’s App Store top ten. If you like tilt controls, it’s a fantastic little game that you can’t go wrong with. If you don’t, then stay the hell away from it.