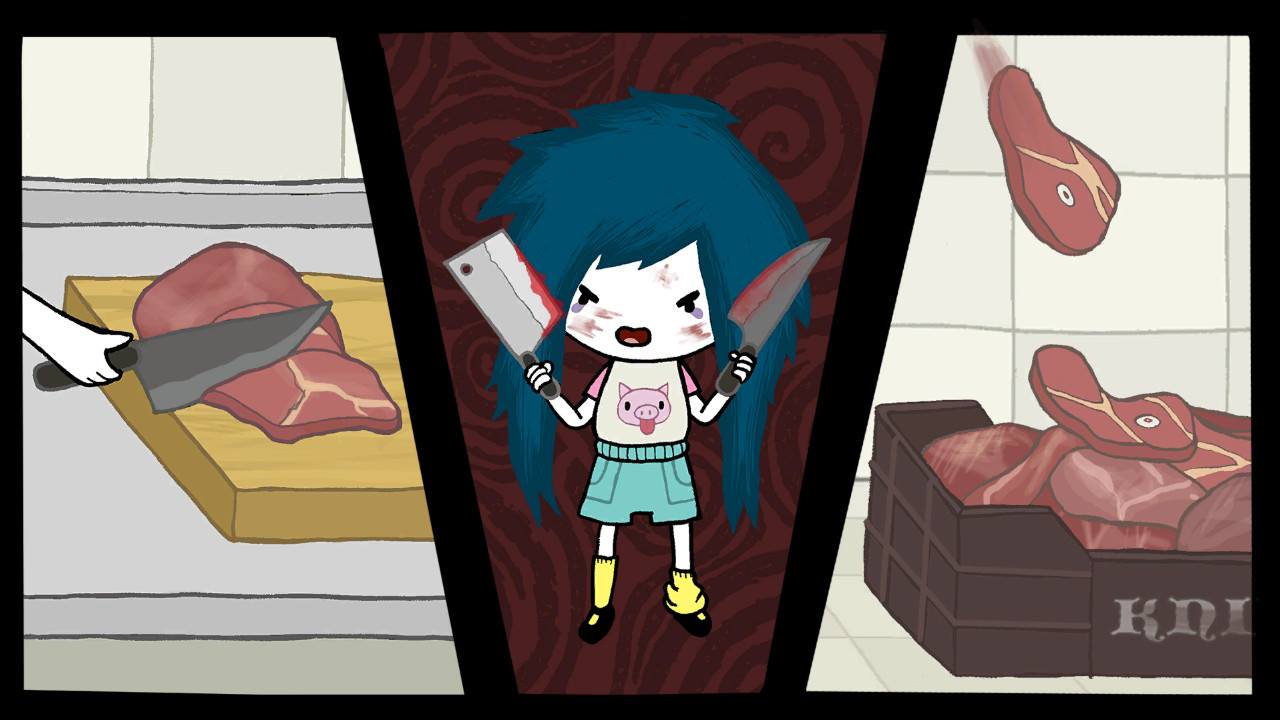 Just use a blade that’s short and sharp for me

Most games present a problem and offer up a set of tools as a means to solve said issues. More often than not, it involves weapons or fisticuffs or some other form of good, old-fashioned violence to make everything go away.

I think this is the first time one has ever had me create my own religion to cure what ails me.

Agatha Knife follows the eponymous seven-year-old who works in her mother’s butcher shop killing and cleaning the animals they sell. She lives in the back room where the slaughters takes place, a fact pretty much every character points out is kind of fucked up. When a new supermarket opens in town, offering its inferior meat at a lower price than the family butcher shop, she wants to do what she can to save the business.

Only problem is Agatha feels a deep compassion for the animals she slaughters. They’re terrified of her, of being released from this mortal coil, and Agatha knows this. She sees the fear in them whenever she enters the room. She could wuss out, throw down her throat-slitting knife and embrace a life of veganism. Or she can do what any rational child would do and start a new religion called Carnivorism to solve both her problems.

Agatha Knife plays out as a pretty standard, if not slightly modernized, point-and-click adventure. You use the left stick to move Agatha around and the right stick to move the cursor, which you can hover over items of interest for some flavor text or an interaction prompt. One button pulls up your inventory, another button pulls items from it, and that’s about it. Touch controls are available on the Switch version, but either method has its foibles. Using the Joy-Con provides more precise movement at the expense of a slow-as-hell cursor (there’s no option to change the speed, either), whereas it’s a pain to control Agatha using the touchscreen, but at least you can just tap on things to interact.

Par the course for the genre, there’s really not much to do outside of going from place to place, trying to find important artifacts. The map is fairly small, with only a few locations to enter, so you wind up going back and forth a lot between the same nine or ten screens doing fetch quests, talking to NPCs, and solving extremely light puzzles.

As character and cursor movement is pretty slow, and interactive objects are not highlighted onscreen, you may spend a lot of time trying to click on every nondescript item hoping the object you need is in the room you’ve meandered into. Some more interactive puzzles would help to break things up a bit, but sadly most obstacles are overcome by taking an item out of your inventory bag and clicking on the intended recipient of the action. It can get pretty tedious, even for this style of game.

As with most adventure games, the writing needs to do a lot of the legwork to keep the player engaged. Luckily, the writers do a great job of creating a world that is interesting, weird, and unique in spite of the basic gameplay. Agatha herself is a poignant protagonist and the game does a good job of letting the player see adult issues from a child’s inquisitive, if often dismissive, perspective. Religion, sexuality, gender tropes, veganism, capitalism, and addiction are some of the many topics this game covers, and largely handles them in an entertaining and thought-provoking way.

“Largely” is the operative word here. While many issues are often looked at with a glint in the eye, a wink and a nudge, the writing can get a bit heavy-handed, especially considering the context of adults talking to a (very mature) child. It doesn’t get into, “Fuck you Terry, you’re not even my real dad!” territory too often, but when it does, it’s pretty jarring, clashing big-time with the otherwise whimsical and otherworldly nature of the game.

Apart from that, the NPCs are routinely strange and the quests arcane, which is right up my alley. One quest requires you to make your white notebook red, so of course you soak it in animal blood. Another sees you cheering up a sad circus lion by taking a recipe for meatballs to the zoo so his lion cubs will be happy. If you don’t smile when the lion turns that frown upside down, then I’m afraid we can’t be friends. Please return my Wild America VHS tape and delete my number from your phone.

Agatha Knife isn’t a perfect game, and definitely won’t appeal to all. But if you can stomach some of the monotony and awkwardness of gameplay, you’ll be rewarded with a charming and quirky little title that’s got a lot of heart. Just don’t let it get cut out of you.