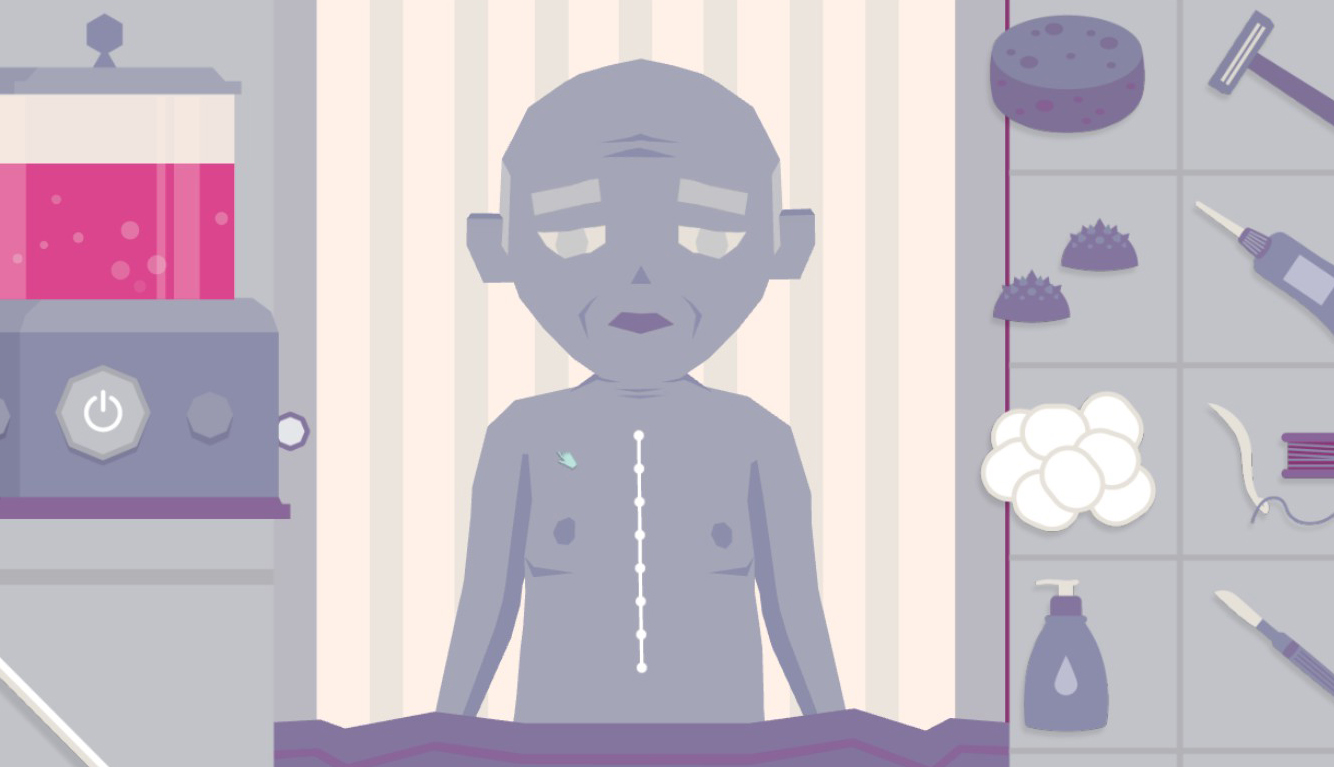 My best friend was a funeral director for about seven years. Fun guy, super positive, real people person. Not at all the kind of pale, spooky, ghoul you might picture when I say “funeral director.” Nobody tell him, but he might be the warmest, kindest, goofiest damn person I’ve ever had the pleasure of knowing.

The job nearly killed him.

No matter how positive and upbeat you are, the death business is a killer. After seven years of mourning parents, human tragedy, daggers-out office politics, and a workplace culture Gordon Gecko would be proud of, he wasn’t burnt out – he was a smoldering crater. So he quit, full stop, total career change. Left the business and never looked back.

A year ago, my girlfriend changed tracks too. Only she wasn’t running away from the funeral world, she started sprinting headlong into it. She went back to college for funerary services, got her laundry list of immunizations and checks to clear her for working with corpses, and came home with an armload of disgusting text books she delights in sharing with me. There are a lot of reasons for her career change, but fundamentally, she’s a believer in death positivity. A new school of thought that advocates for a cultural shift in how we think and talk about death, one that aims to take away the mystery and fear surrounding death and bring it out of the shadows as it were. She isn’t naive about the job she’s going into, but she wants to do what she can to make it better.

Still, I worry about her.

So here comes A Mortician’s Tale. A game all about the pressures and challenges of working with the dead, featuring a protagonist so very much like my girlfriend, in a situation so very much like the one my best friend found himself in not so long ago. I wanted to know if the game would speak to the reality of working in a funeral home, if it would provide players with a peek behind the curtain to a business that few really understand. A Mortician’s Tale does more than that. It offers not only a view into that world, but a glimpse at a better future for it. 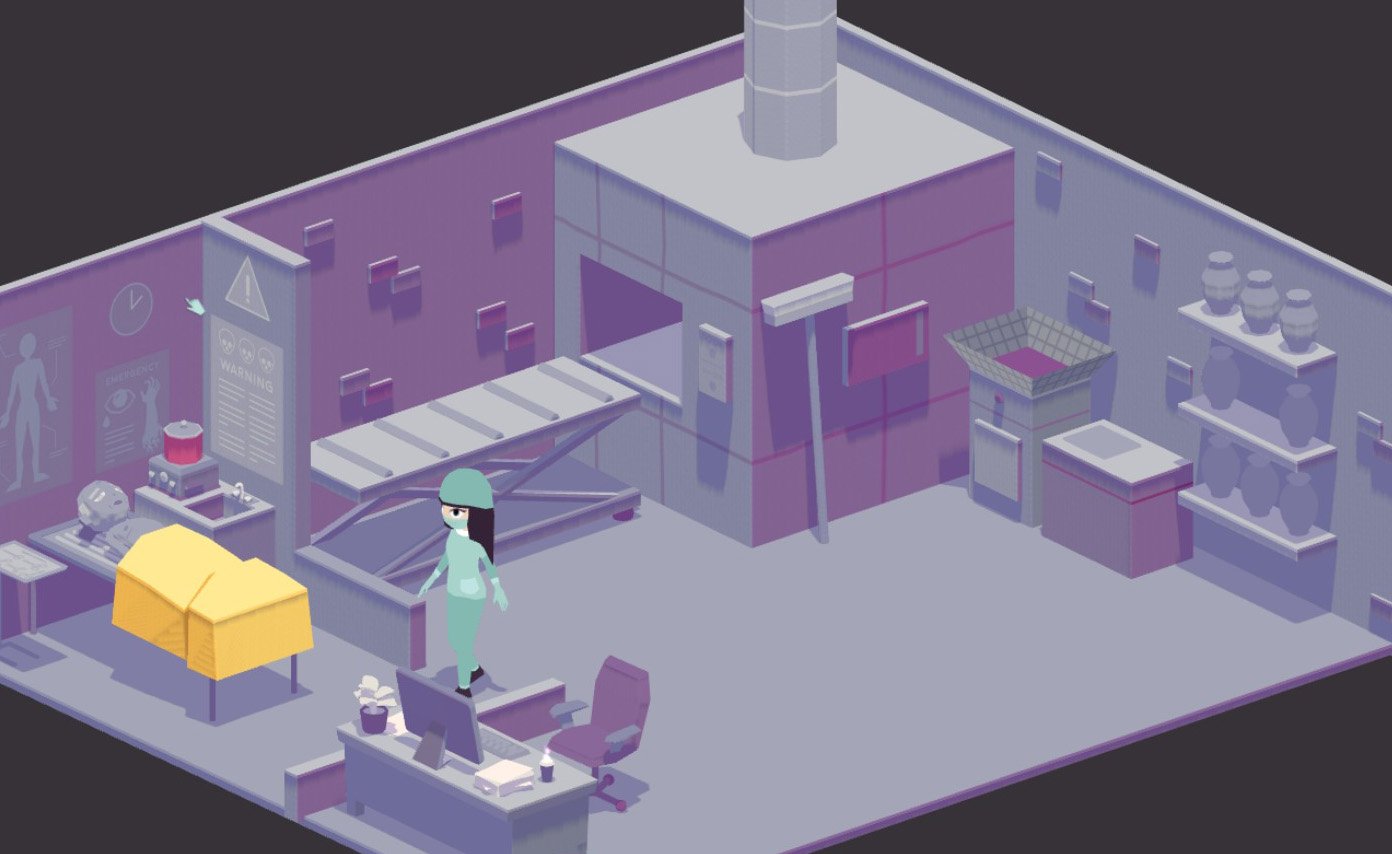 Charlie is a young embalmer fresh out of college just starting at Rose and Daughters, a mom and pop funeral home. While you never leave the funeral home, emails on Charlie’s work computer paint a much larger world around her. One where she balances her personal life against the demanding nature of her job, exchanges gossip with her co-workers, and is privy to the inside baseball of the funeral world. It’s through these emails that the lion’s share of the story is told.

Along with the little slices of life and intriguing funeral facts (courtesy of a genuinely interesting industry newsletter) that are drip-fed into her inbox, a narrative emerges. For Charlie, death isn’t just a job, it’s a calling. She’s death positive, through and through. She wants to do what she can to make the process as easy and healthy as possible for everyone involved, respecting the deceased’s wishes and treating their earthly remains with the reverence they deserve, while doing what she can for the mourning.

Fortunately, Rose and Daughters is managed by an understanding and caring owner sympathetic to Charlie’s own views. Amy, the owner, is a longtime funeral director herself and does her best to make Charlie feel comfortable in the job and help her grow. If it all seems a little too cheery and cozy, that’s because it is. It doesn’t take long for storm clouds to gather.

As a privately run home in an increasingly homogenized and corporate industry, Rose and Daughters is struggling to stay afloat, just like many small funeral homes in the real world. Combine that with Amy’s implied burnout (a pervasive career hazard), and it doesn’t take long for the dreaded email to land in Charlie’s inbox. The home has been sold to a corporate chain and grave changes are coming.

It isn’t quite the Grim Reaper knocking on the door, but it’s close. 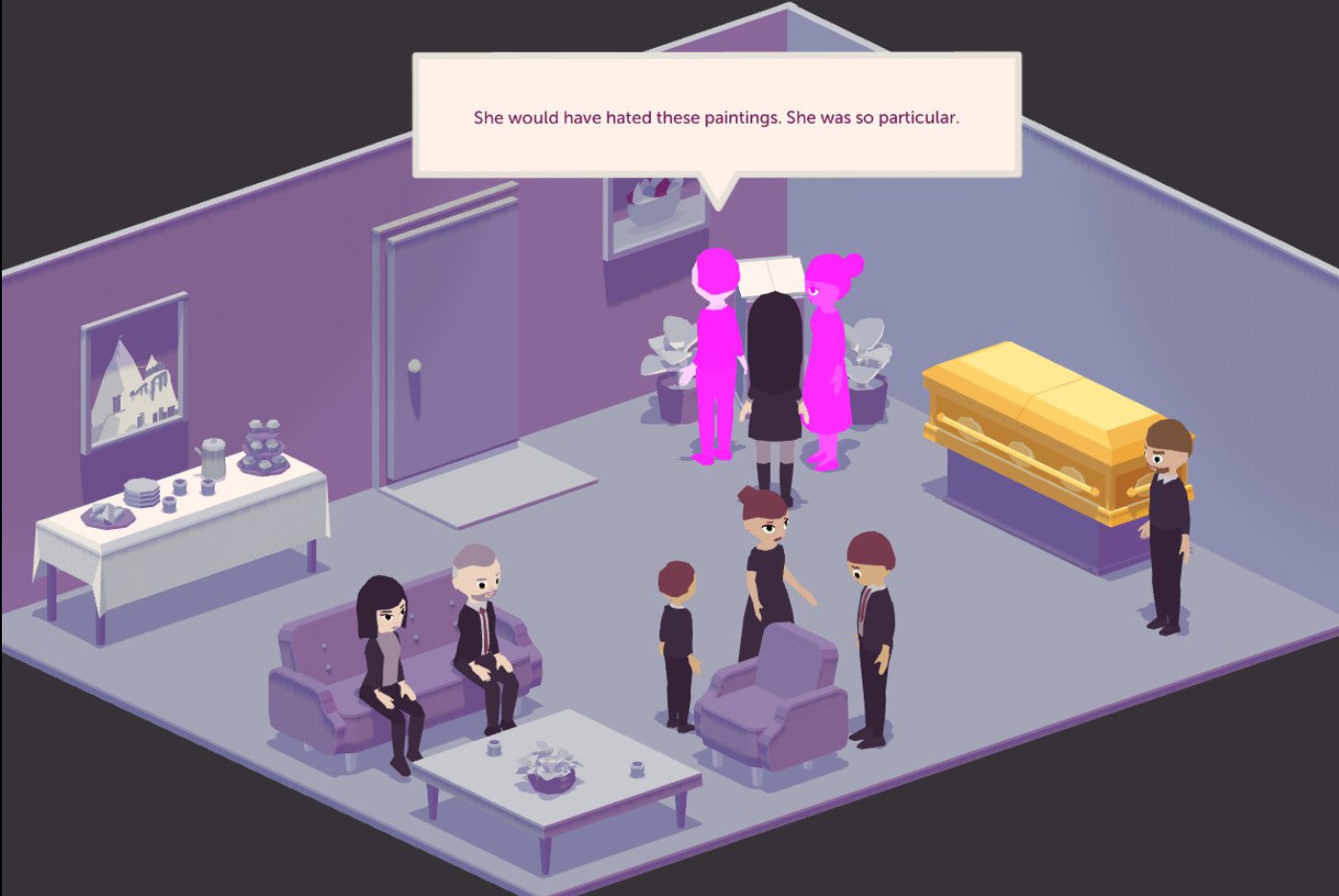 The actual gameplay is broken into discrete little segments similar to a funeral director’s average day. After checking your morning emails and sipping some coffee, you start on the job of the day, embalming a corpse. It’s all hands on, getting into the gully works of a cadaver, massaging out rigor, draining blood, and pumping veins full of embalming fluid. Finally, you ditch the scrubs and gloves for a modest black suit and attend the funeral for the very same deceased you just had on the slab minutes ago, rubbing elbows with the bereaved and mourning.

If it feels a bit surreal, I assure you it is by design. A Mortician’s Tale perfectly captures the peculiar world a funeral director lives in. On one hand, it’s a job. Just like Charlie, millions of funeral directors go into work each day, pull on their rubber gloves, and get down to doing some very dirty, very demanding work.

But on the other hand, a funeral is also one of the most personal experiences in life (or the end of it at least). For the deceased’s surviving relatives and loved ones, it’s a time of mourning, vulnerability, and shock. Part of being a good funeral director is being there, to offer proper respect for the deceased and offering closure to those left behind. It’s a job, sure, but it’s also something more, something that walks a fine line between a career and a lifestyle. That A Mortician’s Tale offers a glimpse inside that world and its unique challenges is an impressive feat. 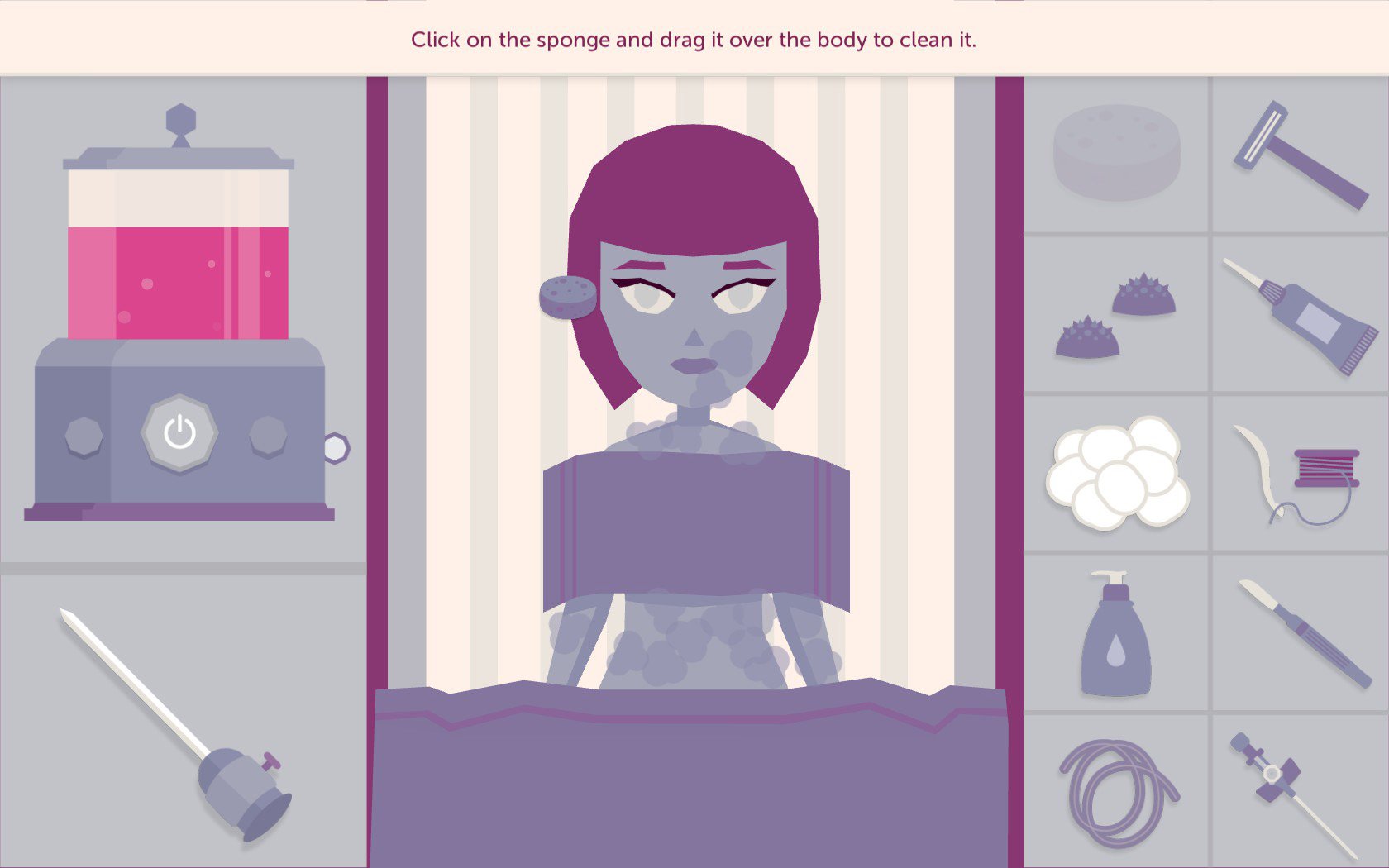 The actual embalming and cremating work is fairly simple. This is not a Trauma Center-like take on embalming that demands incredible dexterity or reflexes. The game is not out to trick you or grade your work, it’s there to take you through the steps.

First you clean the body and shave it where appropriate. Even in the cartoon style and pleasing lavender hue of the game, this can seem strangely personal. It’s both slightly awkward and oddly comforting, a final bit of grooming for someone passed from this world to the next. From there, you get into the nitty-gritty of the embalming process, the incisions, tubes, and chemicals of the job. Those unfamiliar with what happens on the embalming slab are likely in for some surprises (the spiky eye-caps used to keep the deceased’s eyes closed during the funeral look more like torture devices than anything else, and not everyone knows how much bone grinding is involved in a cremation), but the gentle tutorialized process and inability to really mess anything up makes the job a pressure-free experience.

A Mortician’s Tale wisely omits some of the more gruesome elements of embalming (skin slip, tissue gas, purging). This is not a voyeuristic peek at how gory and messed up some bodies can be – It’s a respectful look at a little understood job and industry.

But even acknowledging that, there is some dark part of me that would have liked to have seen a little more depth during the lab segments. Embalming is a far more physical and nuanced job than most people tend to realize, one with no room for mistakes. Getting a trocar deep enough into the body to drain the proper organs is an upper body workout of pushing and shoving. Sewing up a mouth isn’t like stitching a pair of pants back together, it’s a complicated loop-de-loop around in between jawbones and tissue. Mixing embalming fluid is an art all to itself. I understand why A Mortician’s Tale keeps it light, and overall I think that makes for a better game, but it still left me wanting a little more from the lab. 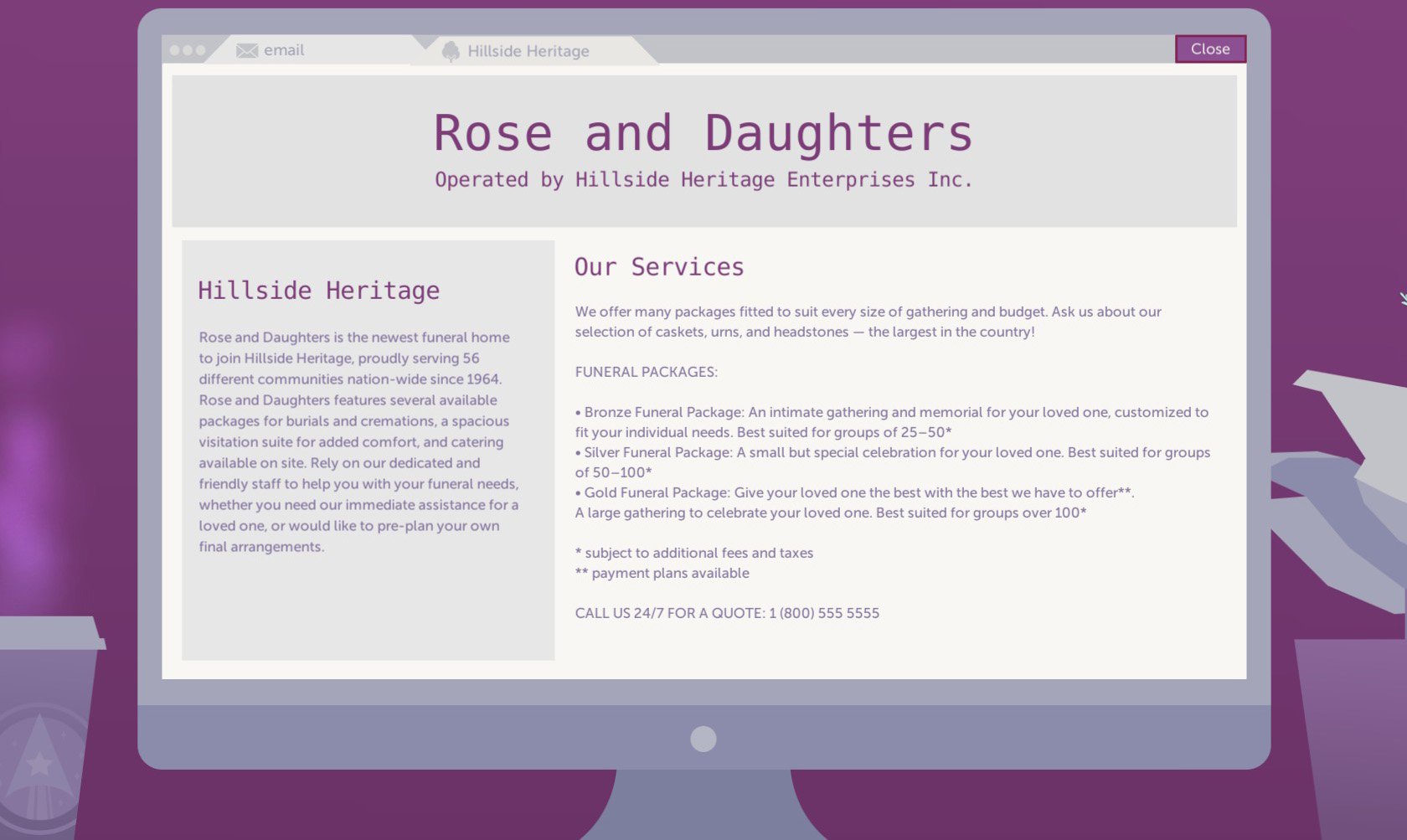 It’s the little details that bring A Mortician’s Tale to life. The tiny things that ring true to the funeral world, like a small child off in the corner of the funeral parlor, impatiently playing a handheld game while the adults grieve. The weird snippets of conversation you can overhear between mourners who don’t know quite what to say or how to handle themselves. Or my favorite small touch, the way the pricing structure changes on the funeral home’s website after its corporate turn. Gone are the plainly stated rates and charges of the old Rose and Daughters, replaced with bronze, silver, and gold tier packages, language that subtly ties how much you spend with how much you care.

The most depressing part of A Mortician’s Tale isn’t the dead. It isn’t the grieving parents, the lives cut short, or even the sparsely attended funerals that betray a life of solitude and isolation. It’s the business. The corporate vice grip designed to wring every last cent out of a corpse. The cynicism of upselling the bereaved. The trampling of last wishes in the interest of selling a bigger, gaudier funeral that will nudge the bottom line a few ticks upward. It’s the same pressure that nearly broke my friend and what I worry most about my girlfriend entering the industry.

But there is also comfort to be found in A Mortician’s Tale. The knowledge that we’re not alone in thinking that there must be a better way. A growing funeral counter-culture is gathering steam, with a whole new generation of morticians and funeral directors opening doors and providing alternatives to the big funeral chains that currently dominate the industry.

Death shouldn’t be something we don’t talk about and the death business isn’t something that should exist in the shadows. A Mortician’s Tale provides an excellent way to join that conversation while shedding some light on a mysterious business that would prefer to stay cloaked in darkness. It’s a short game, only an hour or so long, but it leaves an impact far beyond its runtime. Give it a chance, and it might just change the way you think about death.