Just a girl against the mafia

A Hat in Time caught my eye the moment I saw the pitch. That was all the way back in 2013.

In time (forgive me), it was pushed into the back of my mind. Every sighting of the protagonist brought a smile to my face, as I would recall “hey, this exists,” but that was usually a fleeting feeling that was quickly extinguished as the development timeline went back to “when we feel like it.”

I think a lot of other people slept on this one too, because even at launch many folks in my various gaming circles barely even know what it is — much less muster excitement for it. Do me a favor though: don’t actually sleep on it. 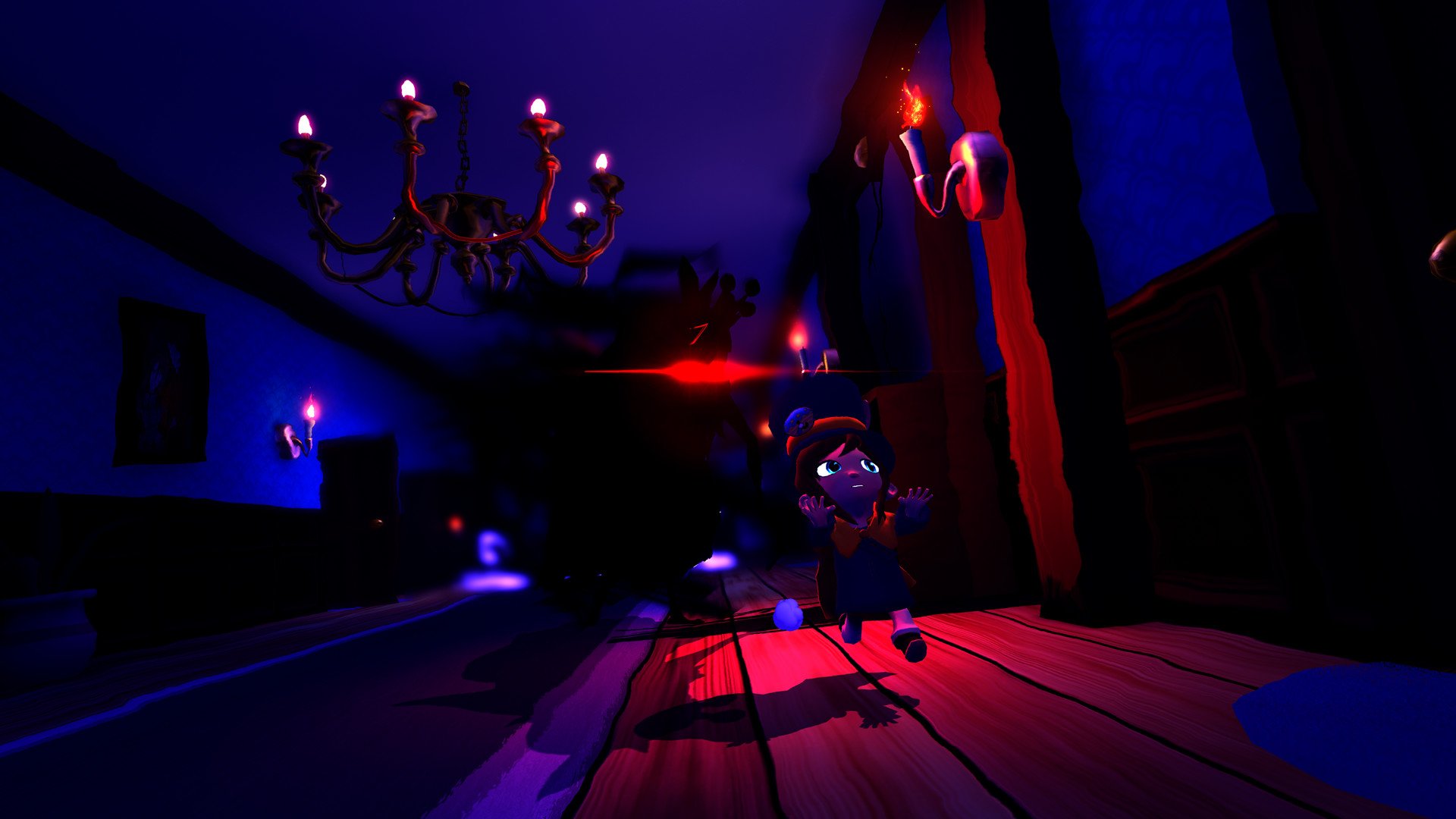 I was enamored from minute one. Hat in Time bursts onto the screen and into my heart, from the standout character designs to the lovely premise. You, an unnamed girl (Hat Kid), need to recover your time pieces from the mafia that were sucked out of your own personal space ship. Yeah, that’s one of the least silly setups, set to the tune of a 3D collectible-centric platformer.

You really get over the samey enemies when they’re spouting ridiculous dialogue, or when your frenemy, Mustache Girl, straight-up suggests that you murder the mafia and put their remains in a jar. It goes from saccharine to dark comedy on a dime, a testament to the high-octane pacing that doesn’t rely heavily on hacky, meme-filled writing. It all moves quickly, but not so quick that your eyes roll into the back of your head.

While there is a dash of meta-commentary, it’s tempered. It makes the twists and turns all the more satisfying, and the same goes for all of the little secrets like an optional text-based adventure game and the various (again, limited) pop culture references. The hub, the aforementioned ship from which you can jump into any given world, grounds it all. It’s a very digestible loop, selecting missions from a hub like Mario 64, yet giving you the option to go back to old levels and sandboxes with new powers (like an ice ground pound).

Speaking of powers, that’s where the “hat” part of the moniker comes in. You’ll craft them by way of collectibles (a yarn currency), where they double as cute accessories and functional abilities. All of this is joined by a double jump and air dash mechanic, which allow for smoother locomotion along said sandboxes, and plenty of room for ancillary stuff like an optional gibberish speak toggle. 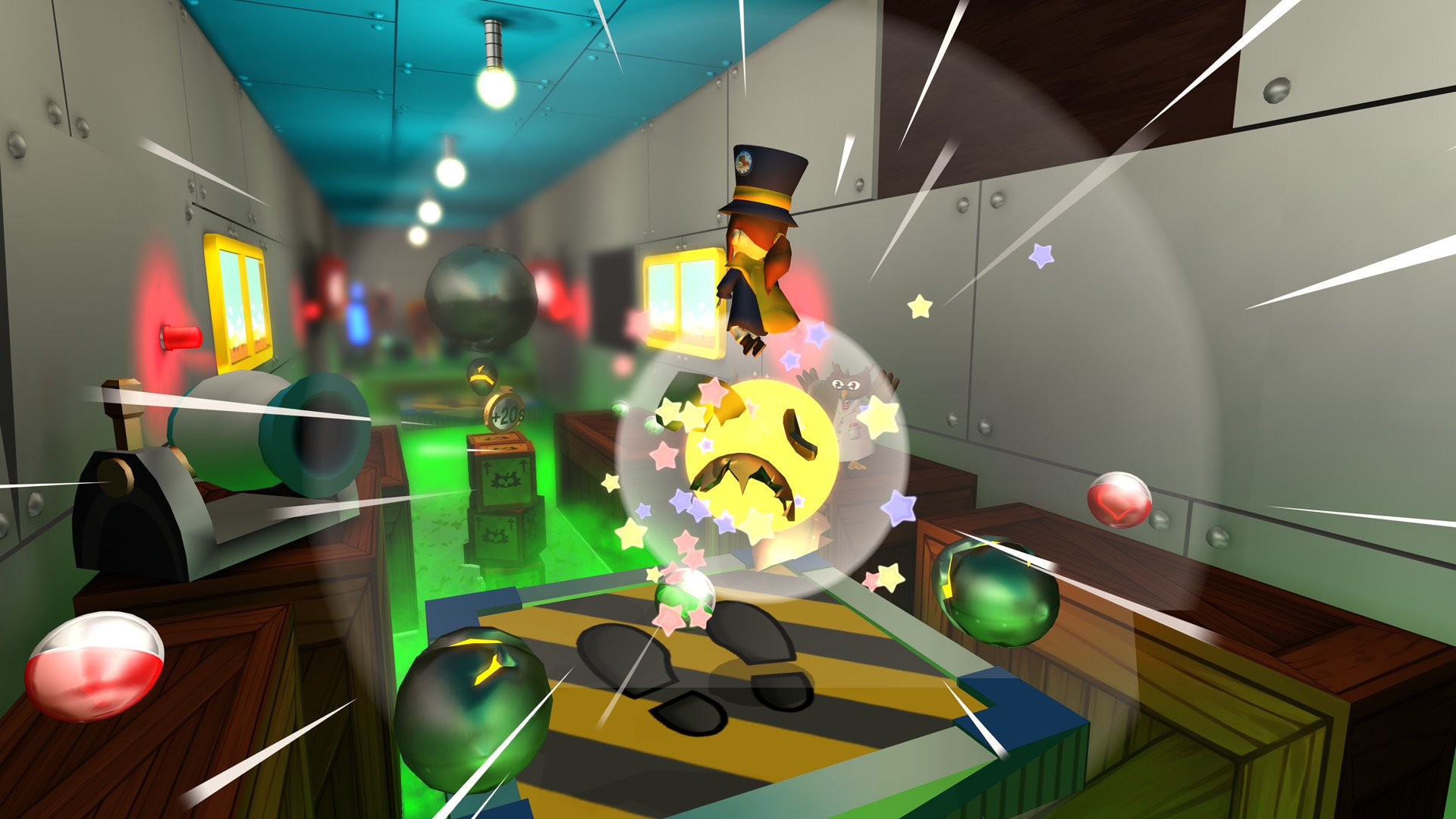 There was a moment where I was making my way through a level that features two competing movies being filmed in a studio. One is an owl that sounds like Uncle Scrooge and the other is a sassy penguin with platform shoes. It just came together, and I won’t bother to spoil any number of other absurd, lovable situations I got myself into. Everything is just so damn bright and beautiful that it’s easy to lose yourself in a lengthy session.

The artwork introducing each stage is fantastic, and there’s so much character in nearly every pore of Hat in Time, from the splash screens to the little micro-objectives. Seeing the girl in a tiny raincoat in a random level because it’s gloomy is fantastic, as are the collectibles themselves (one of which is a series of vault codes that are flying about in the wind). Grant Kirkhope’s tunes, which sound like a mix of Banjo and Mario Galaxy, will help get you in the mood to explore.

Before you get to worried about it being another Kickstarter half-promise, know that this was delayed for good reason. I’m amazed at how polished it is, especially compared to some of its competitors. The art is beautiful, it has near-full (above competent) voice acting, and working features like instant keyboard or gamepad hot-swapping — its biggest sin is that I couldn’t latch onto a ladder a few times. That’s really it in my 10-ish hour quest and 15-ish hour attempt to find everything. Some parts feel a little rushed and somewhat barren, absolutely, but I wouldn’t go so far as to say “unfinished.”

The selfless girl of A Hat in Time is not only a great role model, but she forges her own identity as a true mascot, with subtle notes of likable heroes like Dr. Who (complete with her own time-manipulating Tardis). Any game that makes me smile while I’m glued to it is a great one.

Filed under... #A Hat in Time#Top Stories