A Boy and His Blob, a 2009 “re-imagining” of the NES game of the same namesake (and recently re-released on current platforms), is an interesting case study. When does retro game design and a devotion to source material become an active hindrance to a new product? Similarly, when do inevitable concessions also hurt it?

I’d posit that A Boy and His Blob manages to misstep on both sides of this line. 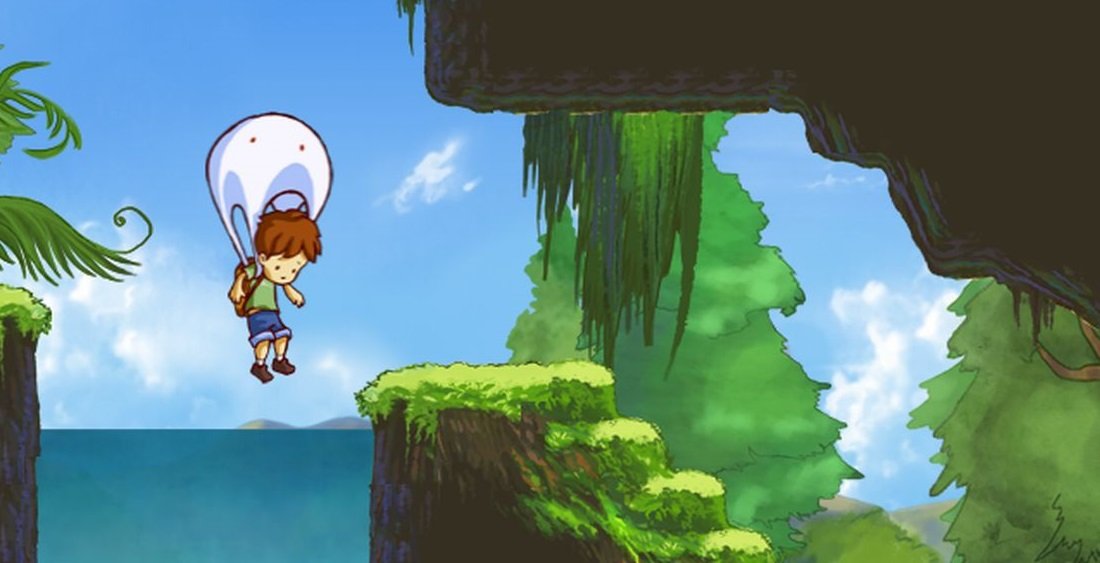 WayForward’s take on A Boy and His Blob is intentionally vague and that’s possibly its best quality. In an opening sequence reminiscent of EarthBound, a child is woken in the middle of the night to a crash outside his window. After a brief bout of exploration, Blob is discovered. From there, it’s just adventuring for the sake of adventuring, and saving the world for the sake of saving the world.

Blob is billed as the greatest asset, a shapeshifter who can perform about a dozen different functions. For example, Boy feeds Blob a jellybean and Blob turns into an anvil. Or a soccer ball. Or a trampoline. Over the course of 40-some levels, variations of this sequence play out hundreds (maybe thousands) of times as the main function of this puzzle platformer.

You wouldn’t think it from the game’s title, but Blob is actually a tertiary character. If it were named more accurately, this would be called A Boy and His Jellybean Wheel. A disconcerting amount of time is spent in a time-frozen state clumsily navigating a menu of the level’s eight-or-so pre-assigned jellybeans. After a jellybean is thrown and Blob (hopefully) performs his duties, it’s only a matter of seconds until you’re forced to again pull up that menu.

That process sucks the life out of A Boy and His Blob. Even though most of the game’s levels are notably short, they often feel like arduous endeavors because the pace grinds to a crawl. Puzzle solutions are usually easily identifiable — in fact, there are often giant signs pointing out the answer — but their execution is needlessly slow and sluggish.

Making matters worse, there are many many instances when Blob simply won’t do what you want. Blob has a tendency to shift shapes just ever-so-slightly not quite where intended. It’s annoying at first, but becomes a detriment in later levels. That combined with stiff and unresponsive platforming controls often leads to starting the section over from scratch.

And, that’s all when Blob is actually on-screen. It’s not uncommon for Blob to be missing altogether, either because it was left behind or it hopped into an abyss. When this happens, the game would like for the balloon jellybean to be tossed, causing Blob to eventually float to your position. Mercifully, however, there’s a call button that can just be impatiently pressed over and over until it balloons your way automatically, slowly but surely.

What A Boy and His Blob has on its side are intangibles, of sorts. They’re plucky attributes that significantly and understatedly enhance a game, but don’t necessarily make a game. For instance, there’s no denying A Boy and His Blob‘s innocent aesthetic, unspoken emotion, or charming spirit.

Those are the qualities that make the game more tolerable than it would otherwise be. Without much option of anything besides leaning on the NES version’s method of using Blob (a non-playable character) as the means of gameplay execution, WayForward’s take on A Boy and His Blob is frustratingly imprecise and inaccurate. But, by deviating a bit and adding the jellybean wheel, it killed any momentum and turned the game into a slog. That is truly the worst of both worlds.