Some of you may remember Overstrike, a hyper-stylized shooter that made its debut at the Electronic Art’s press conference during E3 2011. Since then, developer Insomniac Games went into total blackout on the title up until a few weeks ago when Ted Price, President and CEO of Insomniac, dropped a hint about the project during his keynote at PAX Prime 2012.

Overstrike has since evolved into Fuse, still sticking with the four-player co-op third-person shooter focus, but taking on a more serious tone over what was once looking like a more lighthearted experience. 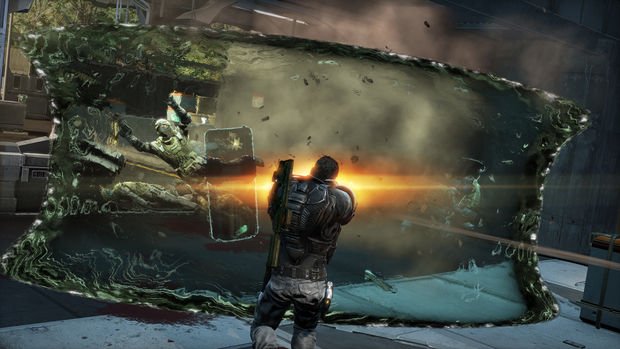 Insomniac wasn’t really willing to talk about the story elements during our hands-on session, but they did give some background and the overall premise. Basically, the United States government found an alien crash site in the 1940s and discovered a substance that was dubbed Fuse. Fuse is a flying, smokey, and somewhat sentient element — think the Smoke Monster from LOST, basically. The government has kept Fuse a secret for decades, and in that time done all sorts of experiments on it in order to create powerful new weapons.

A rogue military organization called Raven learns about Fuse, and proceeds to steal the alien substance for their own purposes. That’s where the four main playable mercenaries come in, as they’re tasked with retrieving Fuse before it’s unleashed against the entire world.

Up to four players will be able to take control of Dalton, Naya, Jacob, and Izzy, and each one is unique in some special way. The four early on in the game get a hold of Fuse powered weapons that suit the specialties of each playable character. 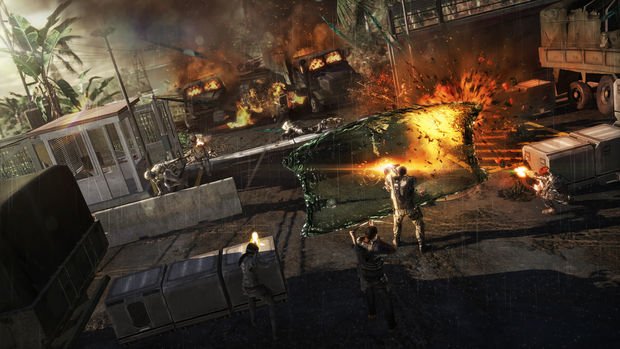 Dalton is a tank type, and his weapon is called the Magshield, which allows him to project a barrier that blocks incoming attack while allowing allies to shoot through as they use its cover. The weapon can send out an energy blast that is powered by the kinetic energy it receives from enemy fire. Dalton can also deploy stationary shields that anyone can take advantage of.

Naya is the stealth archetype, and her main weapon is the Warp Rifle, which coat enemies with a substance that triggers singularities, which means they get sucked into a small wormhole within their chest region. The gun also allows her to turn invisible for a duration of time.

Jacob is the sniper of the bunch, and his main weapon is the Arc Shot, a crossbow that shoots out super heated bolts. A hit from the crossbow is an instant kill that will send enemies into the air, pinning them into surfaces. The player can also trigger a secondary effect, which streams molten mercury from the arrow. A useful weapon to damage enemies as they hold a shield or hide behind cover.

Lastly there’s Izzy, who fits the role of assault gunner. Her Fuse powered weapon is the Shattergun, which will crystallize enemies, lifting them slightly off the ground, and will crystallize anyone else that’s near the initial blast. Once crystallized, a simple shot from any weapon will shatter bodies. Izzy also doubles as the group healer, and can toss a healing-like grenade that will heal anyone within its radius. 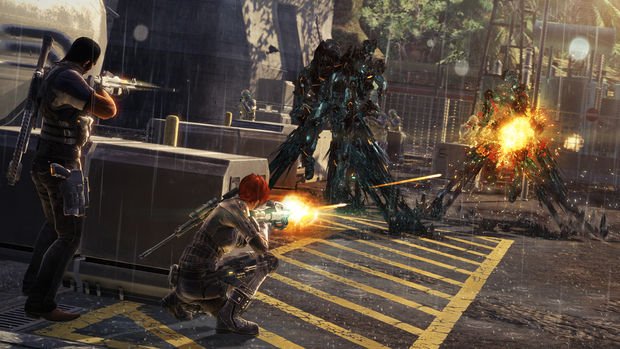 Each character can hold up to three guns, one of which is always the default Fuse powered weapon. The rest of your arsenal is comprised of standard weaponry you’d find in any game, along with the grenades you get in your fourth weapon slot. There is a deep progression system as well, and you’ll be upgrading your Fuse weapon, standard weapons, and the characters themselves as you collect Fuse points by performing actions in the game, like killing people.

On top of all this is Fusion, a feature that will overpower all the character’s weapons for a duration of time. Each player earns their own standalone Fusion meter that gets filled by in-game actions, and when someone triggers it all players will get the benefit of the effect.

After this overview of the core gameplay elements, we got to play a mission around halfway in the story. Raven has equipped a warhead with Fuse, and the team needs to infiltrate an island base in order to stop the launch.

From here we had to take out a bunch of guards defending a base. Once the perimeter was cleared, players can split off into two direction to breach the base. Three players on my team went to blow a wall up to make their own entrance, so while they did that I went into the sewers and snuck inside. Once in, my teammates blew the wall, drawing enemy fire that allowed me to perform a few stealth kills during the chaos. Soon after, a few waves of enemies flooded in, including some armed helicopters. 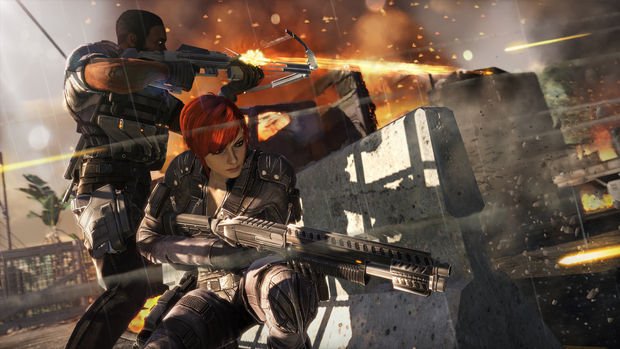 In terms of controls, it’s your standard stuff. You can hide behind cover, blind fire, duck around, vault over, and so forth. I do have to state how fluid the overall controls are. In fact, the game has some of the tightest controls I’ve experienced in a third-person shooter, with me rarely having to fight against the controls. I was also really digging the close quarters combat system, especially the brutal stealth kills you can perform.

Otherwise, though, the combat felt pretty average. The Fuse type weapons are indeed neat, but you will find yourself having to switch to standard guns as the Fuse weaponry needs to recharge. The preview I played had all our characters pretty leveled up, so I can’t comment on how the balancing between Fuse and regular weapons will play out in a real setting.

The last section of the demo saw us fighting against a giant robot that was equipped with machine guns, missiles, and grappling ropes that would tie players up. The Fuse weapons are kind of the hook of this game, so it was frustrating to see that their effects didn’t do anything to the robot mini-boss. I brought this up to Ted during an interview and he did tell me that they’re still tuning the boss fights, and there are some robot bosses that will apparently suffer from the Fuse weapon effects.

It also seems odd that you’re limited to just one default Fuse weapon. Yes, the weapons are pretty badass, but I do worry how stale they’ll get a few hours into the experience. You can at least switch to different characters on the fly so long as there’s at least one AI controlled character in the game. All four characters are always present, and you’re able to play as any of them through a function called Leap. And if all four roles are filled by actual people, you’ll also be able to switch characters at checkpoints and between levels. 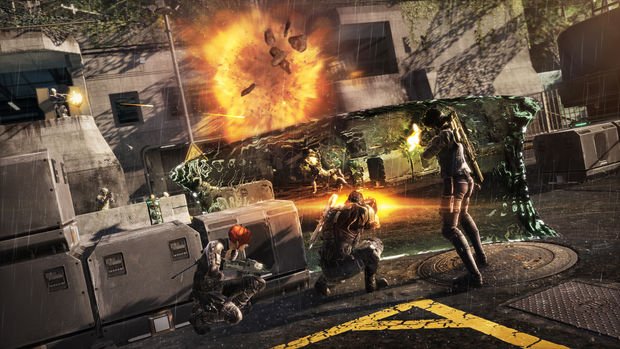 Insomniac stressed the four-player co-op aspect of the game, really encouraging teamwork especially as it grants players more Fuse points when doing team based kills over standalone kills. A simple example of this is Dalton projecting a shield to cover Izzy as she fires through the shield to crystallize some enemies, with Jacob finishing them off with some blasts from his weapon.

So that’s Fuse in a nutshell. Insomniac did tease that there will be another mode, and that your character progression is shared in whatever this other mode is as well.

I can’t help but feel cautiously optimistic here. Insomniac is a great developer and they’ve created some wonderful universes, most of which have featured fantastic visions of over-the-top weaponry. There are plenty of shooters out in the market, and when Fuse was still in its early phases as Overstrike the game was looking like Insomniac wouldn’t have had a problem standing out among all the other shooters. Visually, Fuse is looking great, but to me the design change makes it seem like the company is playing things too safe by competing on the same level as with the likes of, say, Army of Two: The Devil’s Cartel, which also happens to be coming out around the same time as Fuse (and from EA no less).

There is a reason for these changes, and you can find out exactly what made Insomniac change directions in my interview with Ted Price and creative director Brian Allegeier later today.