The history of the Worms franchise is a long and storied one, spanning all the way back to the very early days of gaming. In an interview with Andy Davidson, the main creator of the original Worms game, I was given insight into exactly why the series has been such a lasting success. I also got an extensive hands-on look at the newest iteration being brought forth by Team17 for consoles and PC.

With Andy back on the team for Worms: Revolution and a new 3D engine, this latest title looks to offer fans the same excellent strategic 2D gameplay the series is known for while also appealing to new players with a great, polished look and entertaining water physics that add to the strategy and humor of Worms.

Genesis of Worms: In the Beginning…

The earliest genre of a strategy game in the vein of Worms appeared sometime in the ’70s, with a simple demo program on the Apple II known as Artillery.

This early prototype featured two pixelated squares meant to represent tanks facing off against each other on a very simple battlefield. The game featured actual physics that showed the trajectory of your projectiles as you shot at the opposing tank. 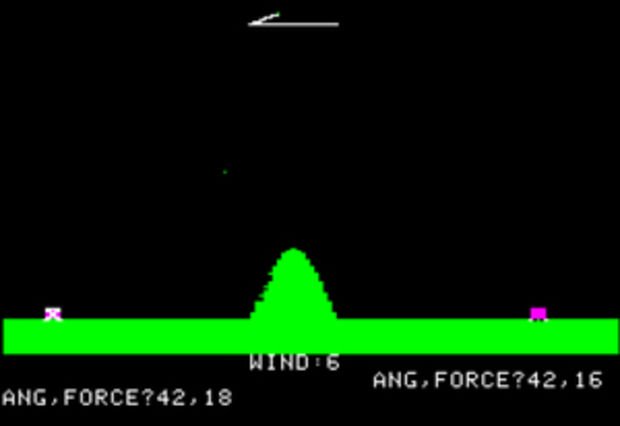 Meanwhile, across the pond, a slacker student was designing his own form of Artillery on a graphing calculator while trying his hardest not to sleep through his mathematics class. As Andy Davidson tells it,

“…The earliest form was on a Casio graph-plotting calculator — we were meant to be doing maths lessons and everything, and I had a little bet with my mate. He said, ‘I bet you can’t make a game on that.’ and I said, ‘I bet I can.’ …it was just a basic artillery game, similar to the ones on the Commodore 64…and I showed it to him and he said, ‘How the hell did you do that?’ and looking back, I’m not sure how I did it — but that’s how boring maths was at school.” 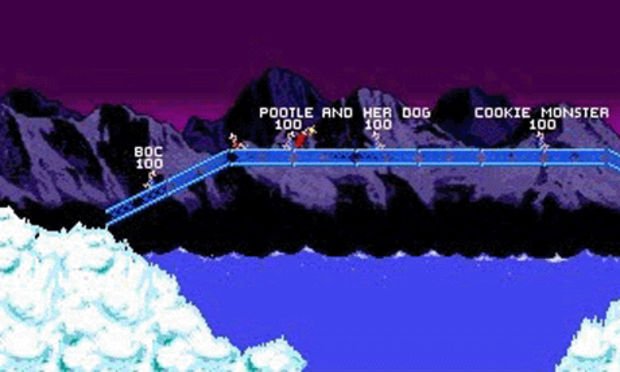 When Davidson got his hands on an Amiga computer — especially popular in the UK in the ’80s — he ported over his little project onto his school computer, and even began to add his own features, such as the bottomless water pits that caused instant kills, and “little things running around” that you could individually name. As his game ideas expanded, fellow students became obsessed with the game — often to the frustration of his teachers.

“It was purely a game for me and my mates rather than to do schoolwork; college-work and everything … eventually it got people skipping lessons to play it. The corner of the art room was basically anarchy — all you had was people shouting at each other, explosions going off. My form teacher eventually banned it, he just went, ‘I never want to see that bloody game in school again.'”

At this point, Andy Davidson decided his dream was to get his game published.

My form teacher turned around and said, ‘Andy, you’re good — but not that good.’ Which was, you know, Cheers for the encouragement. So that drove me on as well…” 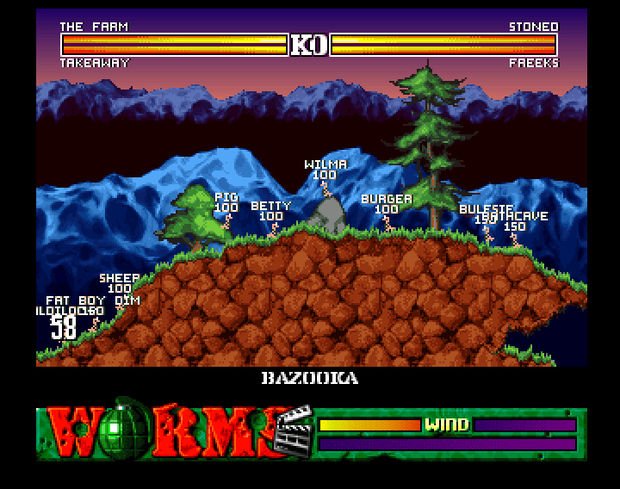 From this point onward, Davidson rewrote and tinkered with his pet project while working in an Amiga shop. He chose to use worms instead of tanks because at that point in game’s history worms hadn’t been featured as characters yet, and because Davidson knew he could keep it simple and retain humorous animations using the annelids.

Davidson offered his customers a chance to play his game, making them unwitting testers who would often spend hours in the shop just to keep playing “Total Wormage.”

“…I wanted people to like the game who hated video games, I wanted to create a really social thing — because that’s what it was, for you to play with your friends.”

At a London Computer Show known as the ECTS (European Computer Trade Show), Davidson brought his game forward to be considered for publishing and found a home with Ocean Software and development Team17. The original Worms was published in 1995 on the Amiga personal computer, and later ported to other electronic devices. 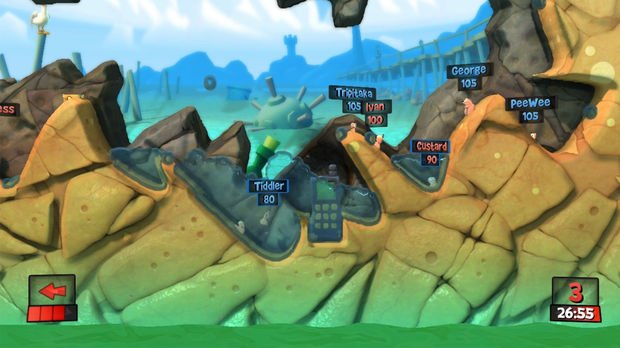 Davidson left Team17 after working last on Worms Armageddon for PC because he didn’t really like where the series was going. Some time after his departure came the first (somewhat disastrous) foray of Worms in 3D, and then several reiterations of Davidson’s basic formula.

Interestingly, exactly 17 years have passed since Davidson has returned to work on the series, and with Worms Revolution he and Team17 hope the game will appeal to a larger audience through its new gameplay engine and polished graphics. I had a chance to play a round with Davidson to get an idea of what this next iteration will add to the series.

The first immediate noticeable change is the sense of scale in the game. With three-dimensional implementation, the worms appear in an environment more suited to their size while animals and people wander around as giants in the background. One of the first environments I saw was sort of an underground bunker in a mound of dirt at a farm. Other environments include within a sewer, on a beach, and in a scientist’s “spooky backyard.”

The 3D implementation will also be important for a few special weapons, such as one that Davidson showed me where one of the original Worms of the series zip-lined into the foreground and was able to aim at a specific area of the map to blast the opposing team with a grenade. 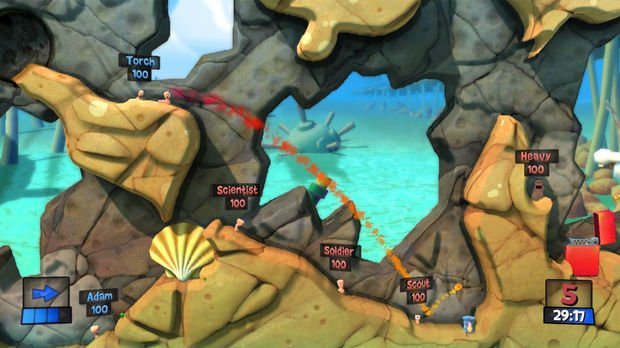 The environments are still structured very similarly to earlier games for strategic purposes, though with a new water physics implementation they’re formed in such a way to make it fun to let water splash around and flow fluidly through tunnels and across barriers.

The water physics are the biggest new mechanic draw to the series, as two of the water-specific weapons included a water-balloon grenade and an air strike of water balloons that can flood an area, sometimes washing nearby worms into the ocean depths.

During my preview, I pelted Davidson’s team of worms with several water balloons, slowly drowning at least one of them while pushing the rest just barely to the brink of death. The water physics add an interesting new wrinkle to the strategy as you can try to push the opposing worms towards explosive objects, chemically noxious beakers, or the bottomless sea itself. The water moves fluidly and realistically through the map, flooding areas and causing turn-based damage to worms who sit mindlessly under it.

Another strategic implementation is the use of different classes of worms. When the player customizes his/her team of worms, they can choose between four classes for each worm. These classes include a tank type that can both deal and take a lot of damage but moves very slowly; a scout type who moves quickly through the level and can tunnel through dirt quickly but is highly vulnerable; a brainy type who offers health to his teammates and also can set up turrets; and finally, the stock soldier type that most players are already quite familiar with. 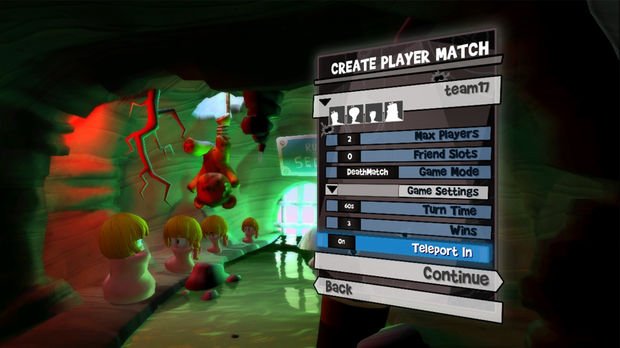 The worms seem even more expressive than before, as they squirm and wriggle a bit more realistically through the environment and make hilariously dumb faces at the realization of imminent death. The new engine makes everything seem more cartoonish and expressive, including the background animations and player deaths.

Worms Revolution includes four basic game types, including a campaign mode with about 40 specific missions, a deathmatch mode, a classic mode for hardcore gamers who want the original weapon set, and a new “Fort” mode, where each team has their own uniquely themed fort, and the strategy is found in deciding whether to infiltrate the enemy fort or defend your own as you lob projectiles at one another. 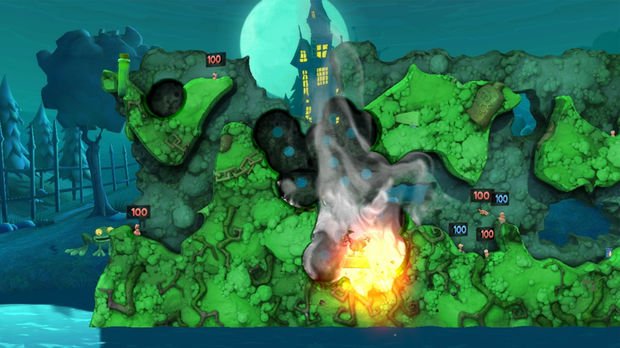 I played a single deathmatch round with Andy and we both blasted each other with a few well-aimed shots of water and shrapnel and misfired a few others with often hilarious results. Though the match was a close one, Andy proved his worth as both a gamer and a developer and won by taking my team down with some incredibly well-aimed hits. The new water physics proved to be a blast to mess around with, and the overall gameplay still retains the same addictive sense of strategic mayhem that has made the Worms series such a lasting gem from the earlier days of gaming.

Worms Revolution is planned to be released at the end of September on Steam for around $15.00 and later on Xbox Live Arcade and PlayStation Network for an equivalent price.