R.U.S.E. was a pretty fun game to play on the PC, but it felt a bit like Eugen Systems had to hold back on depth to also make it work on the console version.

For Wargame: European Escalation, the developers have seemed to go all out on creating an incredibly realistic, deep, but still fun real-time strategy game that uses an updated version of their IRISZOOM engine used in R.U.S.E. 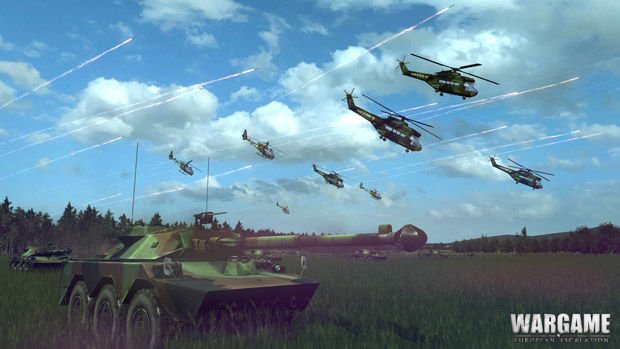 Wargame is a title about war, set in Europe during an alternate Cold War 1975-1985 era where things escalate. The new version of IRISZOOM features better forests, a much larger draw distance, the ability to zoom in to a unit and see every little detail on a T-72 tank, and it looks like you’ll want to see it on as large a display as possible.

Just like in R.U.S.E. you can seamlessly zoom out from the closest zoom level to a strategic map view. Being at the closest — or closer — levels of zoom doesn’t mean you can’t have battlefield control though. Simply move your mouse over the unit you want to focus on in the distance, scroll the mousewheel up, and snap the camera to that unit.

The game looks really impressive, what with the scale of the maps you play on and the amount of detail that’s there, although RTS veterans will probably stick with switching from the strategic view to a moderately zoomed out level that lets you easily order units around. 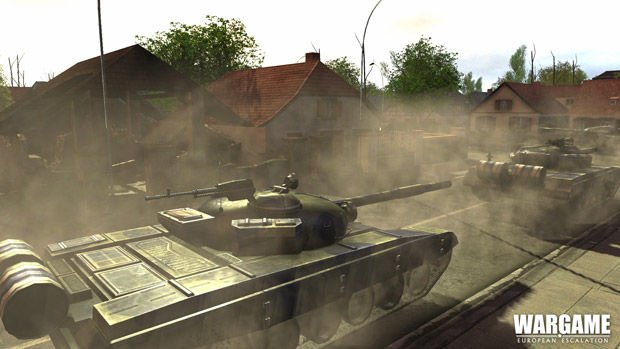 Realism plays a large part in Wargame: European Escalation. Not only because it features a ton of military vehicles and aircraft modeled after their real-world counterparts, but also with respect to the gameplay. Infantry can enter houses, buildings in towns can be destroyed, and because there is no fog of war, all unit intel has to come from line-of-sight. Enemy units can be spotted at range which shows a silhouette of their unit moving around, but you’ll have to get closer to identify them fully. That is, unless you can make out the exact vehicle just by the silhouette — something that can be pretty hard given the amount of units in the game.

Tanks can be positioned in forests or hedgerows where they receive bonuses and stay hidden until spotted — usually too late to escape the ambush. Traveling through a forest might cause tracked vehicles to de-track, however, and it costs more fuel to drive through.

Using the terrain to your advantage can make all the difference if you take line-of-sight into account, but the enemy will do the same. Hedgerows act as “curtains” to make sure you can’t simply see everything on a map with flat terrain. When used properly, a group of tanks in a forest can be hard to get rid of, even if you know they are there. Luckily, forests can be set on fire — which then spreads depending on weather conditions — with a flamethrower tank or a volley of missiles from a group of MLRS units. The resulting fire will then potentially spread, depending on the situation.

Using the latter option, you’ll have a pretty wide target radius for the MLRS missiles to land in, but if the targeted area is within your own units’ line-of-sight, this radius becomes a lot smaller. You might still not make a lot of direct hits with your missiles, but that isn’t a huge problem since the enemy units will panic and route because of the sheer force of your barrage. Likewise, you can use scouts to spot enemy units that are just out of range for your tanks to be effective, which increases their hit percentage. 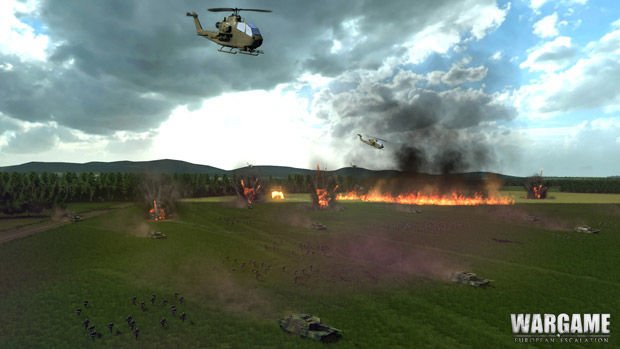 This system of routing works through morale that decreases if nearby units get destroyed, or if a unit comes under sustained heavy fire. If you hit a BMP-2 personnel carrier with a Leopard tank, for instance, it will get stunned as the crew has to recover from the shell’s impact, and will probably route shortly afterwards.

Every unit has its own fuel and ammo, which need to be resupplied by supply trucks or special Chinooks that share their limited supply with units inside its radius — with more expensive units eating up supply faster — or at a Forward Operating Base that has more supply. 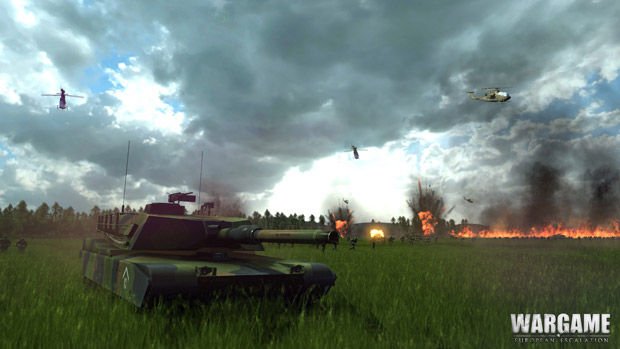 In the campaign, you’ll have maps divided into regions and something there will be a central location that acts as a victory condition. You start out with a set amount of resources and buy a starting team before the mission begins. Because there are around 320 units in the game, you’d be forgiven for thinking that selecting the right units might take you quite a while. It’s not too hard though, as everything is categorized by unit type and every unit has a lot of variations.

A Leopard tank can have around 5-6 types of models to choose from, and every model can be upgraded in veterancy to make it more effective. This costs a lot of money, so you have to choose wisely and decide whether you want a cheap-yet-large army that you need to swarm with, a small-but-powerful and high-tech army, or a balanced mix.

The sheer amount of detail that goes into Wargame: European Escalation is impressive and so are the graphics that make you feel just like you did when you saw World in Conflict for the first time. Even more impressive is how accessible all the information is. All data for hit percentages, effective distance, fuel, ammo, line-of-sight, etc., is displayed in such a way that anyone can understand it after a short tutorial.

I liked R.U.S.E. well enough, even though the “Ruse” system itself wasn’t that much fun to use in the campaign, so the major shift to accessible realism in Wargame: European Escalation that turns it into a pure PC RTS left me quite impressed. Definitely one of the RTS games to look for this year.