Everybody loves Katamari Damacy, right? Keita Takahashi’s silly, quirky creation — classified by publisher Namco Bandai in the genre of “rolling action” — is, by now, a beloved series. But for many fans, the franchise has grown stale, even as it has expanded to mobile platforms. It’s all about rolling up the universe, and while it has still retained that trademark Katamari charm, there are perhaps only so many items to roll up before you’ve had your fill.

The King of All Cosmos is revered and loved by almost everyone. But some people don’t yet know why he’s so special, and when he hears someone describe him as “about as great as your school principal,” it sends him into a deep depression. (Can you blame him?)

Thus begins Touch My Katamari, a tale of redemption for the King of All Cosmos — and hopefully for the series at large, when it launches with the PlayStation Vita. 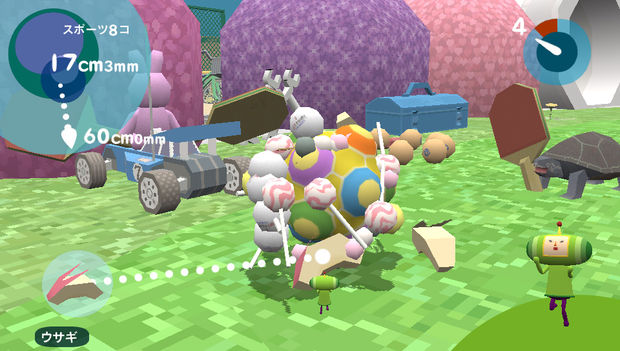 Namco has released Katamari games for the PSP and iOS, but they’ve suffered from a lack of dual-stick controls. Touch My Katamari is the first handheld title in the series to be released on a platform with two analog sticks, and it’s great to bring the feel of the console games to a portable device. You can also move The Prince around with the Vita’s front touchscreen, and it’s ideal for menu navigation, but I prefer the sticks for gameplay. 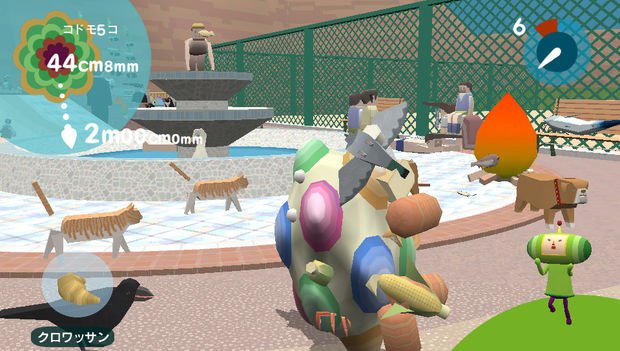 Touch My Katamari is also the first Katamari game to tweak the now-familiar gameplay mechanic of rolling up everything in sight into a ball of ever-increasing size. Now, you can horizontally stretch the Prince’s katamari into a rolling-pin-like form, or squeeze it into a disc-like figure. These aren’t merely aesthetic changes: altering the katamari’s shape allows the Prince to reach areas he might have been previously unable to access, or roll up objects more easily.

I played in a messy bedroom, and by stretching my katamari, I was able to roll underneath a low desk to pick up some junk that was lying underneath. The rolling pin also cuts a wider swath across open areas, allowing you to pick up more items in a single pass. With the Ferris wheel shape, I could fit my katamari into a narrow gap; the katamari also moves up and down ramps more quickly like this. 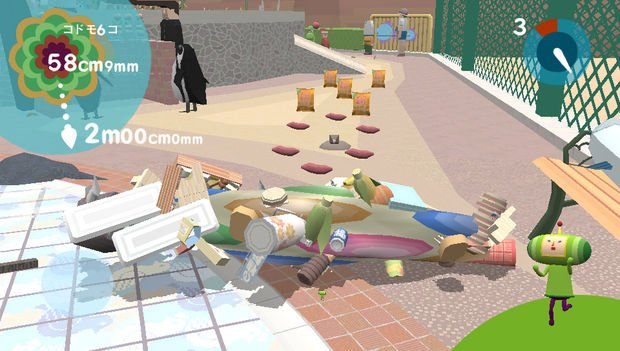 To stretch, you put your fingers in the middle of the Vita’s rear touchpad and pull them apart; to squeeze, you make the opposite motion. Double-tapping the touchpad resets your katamari to its original spheroid shape. The gestures are simple, and I found the pad to be responsive. I didn’t get to play more than one stage, so I can’t say for sure if the overall level design actually makes these gameplay changes meaningful, but they made a difference in the cluttered bedroom.

Playing through stages earns candy, the game’s currency; you can use it to buy stuff for the King and unlock new modes as well as music. (The music, by the way, is as delightfully zany and catchy as ever.) The game also utilizes the Vita’s location-based “Near” functionality, allowing you to exchange information such as high scores with other players in your area. Beating their scores gives you extra candy, and who doesn’t love that?

Filed under... #Katamari Damacy#PSVita#Touch My Katamari