If you haven’t noticed by now, there’s been a theme with Call of Duty: Black Ops II where everything has been getting revamped. Your actions in the single-player campaign will affect the ending, and multiplayer has ditched the former loadout system for something way better.

The same mentality Treyarch has applied to everything also extends to Zombies, and as studio head Mark Lamia described it, is “a mode that really we owe thanks to the fans for … It exists because they demand it, they demand that we make it. We’re so happy about that ’cause we love making this part of the game as well.”

The traditional Zombies gameplay is still present, but with it comes a new story mode that features the mode’s largest world ever, a competitive four-versus-four versus zombies mode, the ability to create custom games, and so much more.

Up until this meeting with Mark, I had no idea that there was a story based around the Zombies mode in Treyarch’s Call of Duty titles. Well, technically, there’s isn’t an official one from the studio. It’s more that the fans — yes, you — create the story with each game.

“The story of Black Ops II: Zombies is we don’t fully explain it,” Mark told us. “There’s just the core gameplay mechanics which are incredibly fun to play. And then there’s the story which is kinda crowd sourced. It’s this phenomena when it comes out and it was amazing when we put it out — it’s like people wanted to attach a story to it.

“And you saw them start to do it, pick out things, and they’re picking out textures, and they’re linking things, and it was this thing because when we originally did it as an unlock in World at War, we saw that and we started playing with the community and actually talking with them through future releases. It might have started out as maybe a smaller hardcore niche thing, but it isn’t any longer.” 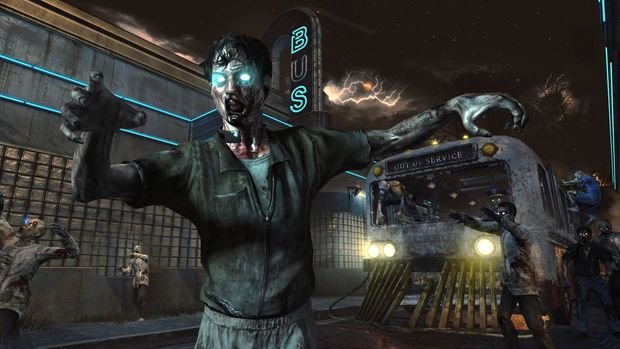 Fans were already spinning a story together just based on the recent Zombies teasers, in fact. “So the past decisions that were sort of made in the Zombies world do play a role in this,” Mark adds.

However, you don’t need to really know anything of the story to enjoy Zombies mode. It’s a deep community driven element that gives something extra for the diehards. All that the average player really needs to know is that you’re in a post-apocalyptic world filled with zombies and magic, and you simply need to survive.

Enter Tranzit, the Zombies “story” mode. One to four players will be going against the undead as they make their way through the largest Zombies world ever. It’s a big, expansive world that you can either navigate on foot, or use a bus to plow through areas.

Going to different towns using the two methods of transportation requires different rewards, and presents new strategies that players will have to come up with themselves. The debut trailer shows the team of four using a bus that offers nice protection, but can get overrun as well, for example.

How the navigation exactly works wasn’t detailed, so I have to wonder how open Treyarch is going to get with things here. Namely, do you have a choice on which towns you can visit, or will it be a more linear, set path you have to move across?

Survival mode is more like the traditional wave-based Zombies game you’re familiar with. One to four players will work together defending a certain area. In this case, these standalone levels are ones that have been carved out from the Tranzit game world. So you’re just playing in one area, defending it by making use of magic, Pack a Punch machines, Mystery Boxes, perks, and so on.

What I’m really looking forward to is the new Grief mode. It’s like Survival mode, except there are two teams of human players that have to compete against each other, and work together all at the same time while fighting waves of zombies. Or as Treyarch calls it, 4z4.

On top of the three modes comes Custom Games, where you’ll have control over the parameters of Zombies matches. You can make it so only head shots count, turn off all magic items, or even start on any specific wave you want. The game will grant you points relative to what you would probably get based around the wave you start off with. So if you start on wave 20, you won’t be stuck with a pistol — that would just be suicide.

Matchmaking has also been improved, as has stat-tracking. Each map and mode will have leaderboards as well. And that about wraps up what was shown in this early look. Expect new zombies, new characters with dialogue, and of course new weapons. In fact, probably the coolest takeaway from this look at Zombies was how there will be crazy future weapons you can build. You have to find the parts throughout the game world, and once assembled, you’ll be able to obliterate zombies.