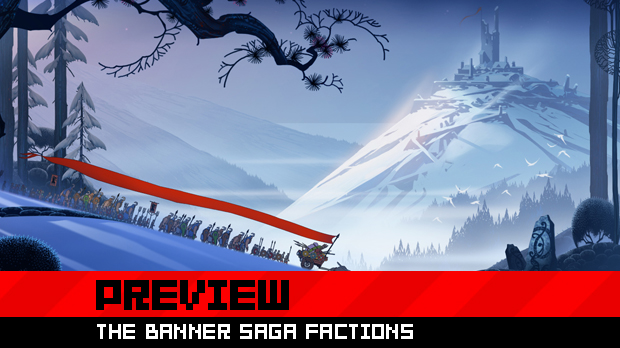 Somewhere between checkers and chess, the contemporary turn-based strategy game resides. Advance Wars, X-Com, Heroes of Might & Magic, and Fire Emblem are known by many, loved by some, and mastered by very few. Their intricate systems are simple and colorful enough on the surface to attract a following, but none are quite as pretty as The Banner Saga: A great board game that never existed brought to life within the milieu of a gorgeous animated fantasy that never existed.

With a diverse range of influences in a genre developers rarely touch these days, The Banner Saga may just rekindle the turn-based strategy game and draw in players who usually ignore the decidedly stagnant genre due to its often drab presentation — and Banner Saga’s gorgeous, soulful Vikings are anything but drab. The game is offering something players have long been asking for, but the Kickstarter that went 7x over its asking price of $100,000 already told us that much, didn’t it? 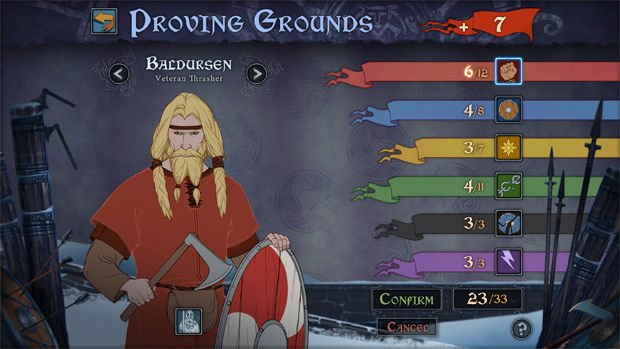 If you followed, or perhaps supported, The Banner Saga during its Kickstarter phase, you are likely familiar with its lush, early-Disney-looking rotoscoped animation that brings the world of Norse mythology to life in a way we haven’t seen done before. You can almost fool yourself into believing that cancelled Warcraft adventure game came out when you gaze at it. What you likely don’t know is how it plays.

Not to be confused with the single-player narrative promoted in the Kickstarter video, Banner Saga Factions is the multiplayer component of that game stripped out and repurposed as a free-to-play multiplayer game. While easing me into the battle grid at its office, Stoic was throwing Chess and Magic the Gathering comparisons willy-nilly. During their Kickstarter phase, I ridiculed them for having the tenacity — as if a first-person shooter developer could compare its game to basketball because you aim and toss a projectile. But, the shoe sure does fit … 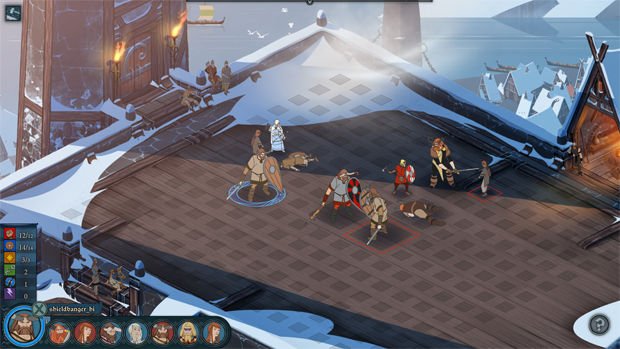 Okay, let’s keep this simple because it’s not going to stay that way for long. You form a team of six members, chosen from 16 classes, and try to survive against your opponent’s six combatants. That’s the game at its core. But, gosh, if it doesn’t feel that simple when you have your hand on the clicker. Players of strategy role-playing games will be familiar with the move restriction, player initiation that dictates the turn of each party member, and post-match leveling ability. However, facing (à la Final Fantasy Tactics) doesn’t factor into combat. You better compose your team wisely because they will become your greatest asset, whether you level them through renown points earned from defeating enemy troops or purchased for money online. Stoic will not lock players out of content through the pay model. Instead, paying will only get you to where you were going to anyway more quickly.

Each of the 16 character classes has its own animation, unique look, stats, and passive ability. For example, Shieldbangers are large, defensive troops with a passive ability that allows them to counter attack when their armor is attacked. Archers, while defensively weak, do extra damage through puncturing enemies with low armor. It may be a lot to keep up with, but the game will ease you into the character classes with a starter group. From there, you can add more to your roster, switch some out, and eventually level them up to an advanced class.

As you acquire renown, you can invest it into a character’s individual stats. However, each class has guidelines that keep you from turning your archer into a walking tank. For example, you may have 50 renown, but you can’t put more than six into your archer’s strength. Once you spend a set amount of renown in a character and level up their rank (maxing at five), you’ll be given the choice of three advanced classes that each offer a different active ability that range from area-of-effect attacks to defensive buffs that can change the tide of battle. 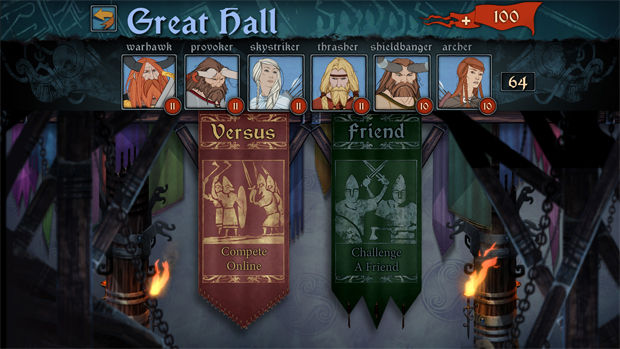 The above is pretty standard fare, but it makes for a solid game. However, I’ve left out the two most radical things about combat for the sake of not drowning you, dear reader, in information overload. The Magic the Gathering comparison rears its head again through the unique damage system that ties health points to strength. In other words, a warrior with 12 health points has 12 strength as well but if you knock those health points down to four, he won’t be much of a threat.

Sometimes, you’ll want to knock out an enemy’s armor first. Armor dictates not only how much damage your attack against their health/strength will do but also how likely it is to land. If you knock an enemy’s armor down at the start of a match, they may not be such a threat at the end when you are outnumbered. Though it sounds complicated and will likely remain complicated until experienced through multiple (failed) matches, this system opens the door to a deep level of strategy built around risk and reward. Every day, the developer is improving balance through its dedicated QA staff member, beta testers, and consultation from their friends at BioWare they left to make Banner Saga happen. Their goal is to not have a single team build dominate all others.

Okay, bear with me as we go deeper down the rabbit hole. There is one last feature I must mention: Willpower. Willpower is a stat specific to each character that lets the unit do extra damage or movement  (some classes can do both) in a turn. However, it is a finite resource that doesn’t refill until a battle is over. This is when the chess comparison feels apt, since top-tier players will need to be mindful of their opponents’ positioning and willpower. 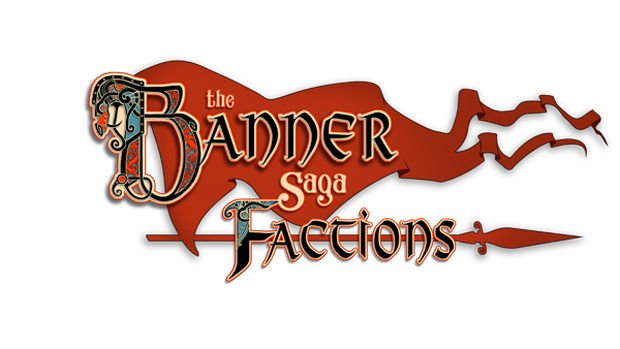 Perhaps a warrior can’t hurt your axeman from that distance with that much strength, but if the other player tosses in one willpower to move an extra square on the grid and an extra willpower for more damage, you may just lose your burly, bearded companion. In a nice touch, all the corpses remain spread out on the ground, serving as a constant reminder of the bloodshed that transpired — not that there is any blood in this decidedly PG, Disney-inspired world.

In between matches, you’ll return to your gorgeously rendered hub town, complete with some very eye-catching parallax scrolling. Here you’ll be able to upgrade troops, see your achievements, buy characters, and eventually purchase items that will provide a secondary ability in combat (though this feature may come in post-release patch). All of Factions’ characters, boards (of which there will be around eight at release), and assets are being borrowed from the to-be-released single-player retail game. Though Factions’ players will be able to play against Banner Saga Chapter 1’s players in 2013, they won’t have access to the 16 new character classes that release will introduce.

In one of the more inspired uses of the Kickstarter platform, Stoic is including 2,000 banners made by backers in the game. These crests will be ways that players can identify themselves, but they can further customize them by displaying earned trophies they are proud of stitched beside their chosen crest. It’s kind of like apparel in free-to-play games, but, instead of saying “I paid this much for this,” you are telling players, “I EARNED this trophy so watch out!” It’s a really nice touch that makes achievements mean something to more than just the player earning them. 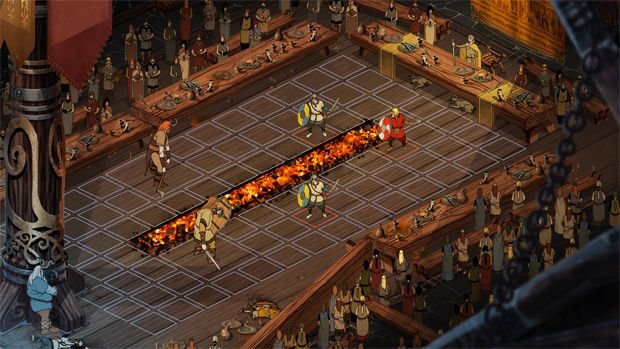 Though Factions is merely a multiplayer offshoot of the single-player epic Stoic is creating, it certainly feels like a full game and one that the developer is confident in supporting as it releases its trilogy to downloadable services. With sound by the guys behind L.A. Noire, music from the composer of Journey, and painstakingly hand-drawn art by Powerhouse Animation (Epic Mickey 2), Banner Saga Factions is a game that feels, looks, and plays like no other turn-based game, least of all Chess or Checkers. Though this bite-size sampling of what’s to come may not be what backers wanted, it should tide them over until they get the main course in early 2013.

Factions will be released for PC and Mac in early November, followed by releases on Linux, iPad, and Ouya. However, you can play the game early at Fantastic Arcade this weekend. A beta for backers will roll out soon after.

Stoic is also considering giving the free-to-play game its own story mode in an update, but one step at a time. Though biting off more than they can chew and still managing to swallow is slowly becoming the norm for this young, ambitious developer.