Much like the Rapture, the Quickening, and whatever other religious world changing event is coming, The Baconing is upon us and we must get our collective asses back into church and pray that our savior Deathspank can save us.

Even though this is technically the third iteration of the Deathspank series, the team at Hothead wants to allure new players by not putting the obligatory “3” in the title. This way, the reinvention will give new players the opportunity to get involved with the world of Deathspank without having to feel like they will need to sit through the previous two. This is also Hothead’s first game where they are in complete control of publishing as well as developing. 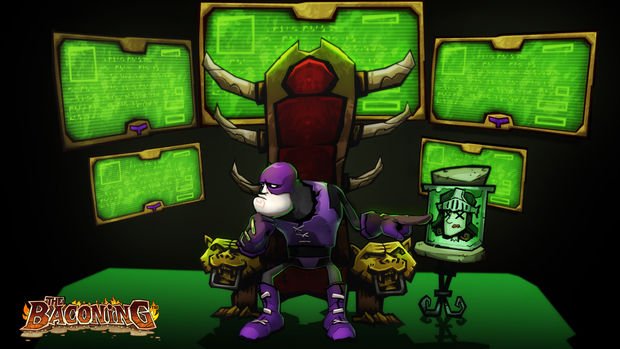 Hothead Games asked their community for a title to the new game without divulging any information about it. The winner of the submission contest obviously has a thing for pork products of some type and hence, The Baconing was born.

The title conveniently ties into the games storyline where our hero is bored from vanquishing too much and wonders what would happen if he would put on all six Thongs of Virtue (the powerful items from the previous game) at the same time. This attempt at bizarre fashion creates the monster in The Baconing known as the Anti-Spank.

To stand a chance against this new menace, Deathspank will have to burn each of the Thongs in the five fires of bacon scattered around the world. Your journey will entail traveling a vast science-fiction world with inspiration from films such as Blade Runner and family home game Simon. So, the story sounds compelling enough — who doesn’t like magical thongs that can create your own personal nemesis, right? 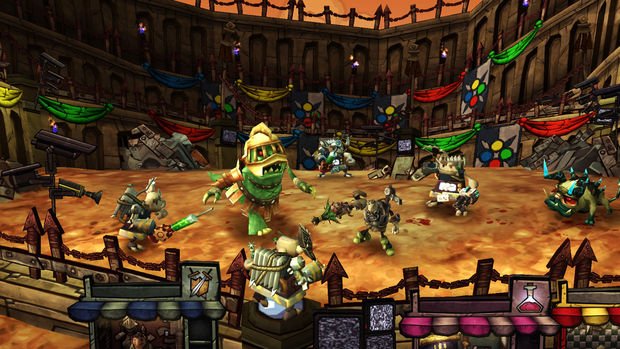 With the previous Deathspank games, the team admits that the gameplay did not hold up over the course of eight hours. Just an eight-hour button masher that you were finding yourself rushing through to get to the next scene, basically. One major fix with this is the improved AI that will now bring the fight to you instead of just standing around waiting for you to come and vanquish their faces.

In order to combat the new AI, which will overwhelm Deathspank in every direction, is his new shield charge that pushes enemies back. This will allow the player a chance to regroup and use different attacks such as his crossbow. There are seven different crossbow variations that are all chargeable to give you a stronger attack, much like the shield.

The Baconing has quite a few puzzles to solve and you’ll be able to decide on how to move forward. For example, in one puzzle, I had to make a rhyme with some monks to get a code to proceed into the next area. I could either choose to answer their riddles or simply kill them. 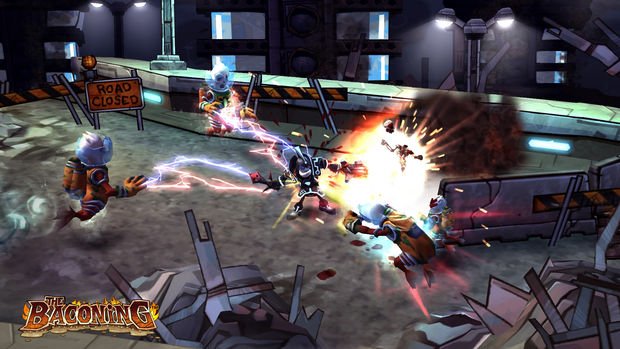 To top it all off, there are also going to be seven unique Weapons of Justice which will be usable after defeating a certain amount of enemies. Other weapons include a chainsaw and my personal favorite, a laser-guided attack from fire-breathing dragons.

The environments are all updated as well. In the last games, level design felt a little barren. Now they have added new set pieces to allow for a cover system where Deathspank can hide behind walls and barrels to plan his attack.

There is also local co-op with a new character to the Deathspank world. Your co-op partner is Bob from Marketing and he is a freaking shark who uses a swordfish as a weapon! He might not be an integral part of the story, but he is a great addition to the world of The Baconing. 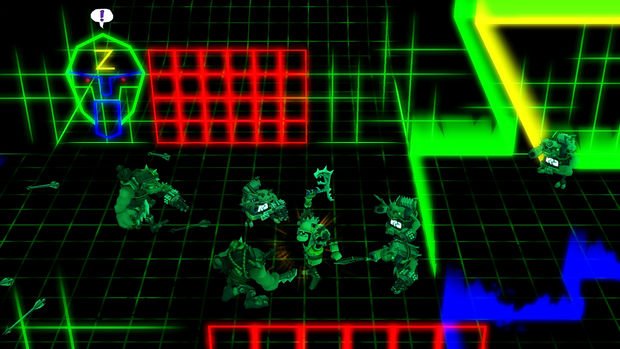 The environments in the game are as colorful and fun as the story. Along with the Spanktopia world which has the whole Blade Runner-future-slum feel, there are also ones that really add to the color of the narrative. There is the Forbidden Zone where we noticed elements from the game, Simon. You might also notice elements from Battlestar Galactica or Knight Rider here.

Then there’s the Forbidden Kingdom world where you will have to work with the Nuclear Family in order to restore order to their amusement park. In the park, you work with their mutant creation named Muto, the mutant mouse-type thing that resembles a certain superstar from Disney.

The last area we visited was the glorious land known as Rainbows End. Of course, if you have rainbows, you have … gangsta-ass leprechauns. In their musty old casino — which resembles Atlantic City — you must help them with some magical jobs to secure certain goods which will help you along with your quest to save the world. 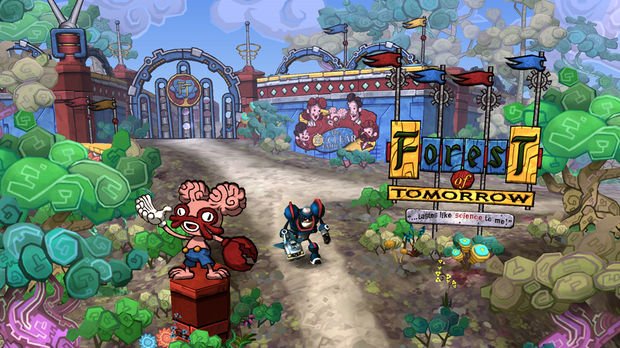 The inventory system has also been revamped to accommodate all the various items that are in the game and they have made it easier for you to organize your stuff. You will be able to quickly find what you are looking for instead of having to sift through hundreds of random items that you don’t need to use.

The Baconing is a revitalization of the Deathspank series. In this edition, every item, system and the design has been touched by the development team. The team at Hothead is really trying to give new and old players a nice sweaty thong wrapped in bacon, soaked in beer batter and deep fried to sink their teeth into. The game looks like it will be a hit and I can’t wait to give this version a solid play-through or two.