Sony San Diego experimented with motion controls in MLB 11 The Show last year, implementing basic PlayStation Move support in a fringe game mode, Home Run Derby. The inclusion of Move controls in a casual party game and nothing else seemed to speak volumes about their viability as an input method for a sports simulation. Of course they couldn’t get Move controls to work in the actual game; it’s just not feasible, I thought.

But the talented folks behind The Show have made a name for themselves by defying expectations, somehow making a beloved game better every year. This time, they’ve managed to make Move controls work throughout MLB 12 The Show. I recently spoke with senior designer Eddy Cramm, and when I asked him if he actually played MLB 12 with Move, he said without hesitation, “Oh, absolutely. I prefer it.”

Cramm acknowledged that there’s definitely a learning curve for MLB 12’s Move controls, and I can attest to that. Even after he showed me the basics, and after I watched the in-game tutorial videos (starring cover athlete Adrian Gonzalez), it took me a while to get my bearings. But once I had about two innings of hitting, pitching, and fielding under my belt, I felt like I was in the zone — the fact that I was using Move had almost become an afterthought.

Sony San Diego has designed MLB 12’s Move pitching controls to resemble the actual pitching motion. Once you have selected a pitch and moved the wand to aim it, you hold the trigger while pulling the controller backward to set the pitch’s potential power (the further back you go, the closer to 100% power you get). Then you whip the Move wand forward; the speed with which you do so controls the actual power of the pitch, while the point where you release the trigger determines your release point (and thus, accuracy). It feels natural, and although it’s less complicated than the analog-stick controls that Sony SD introduced last year, it has the same effect of making you feel as if you’re skillfully executing your pitches. 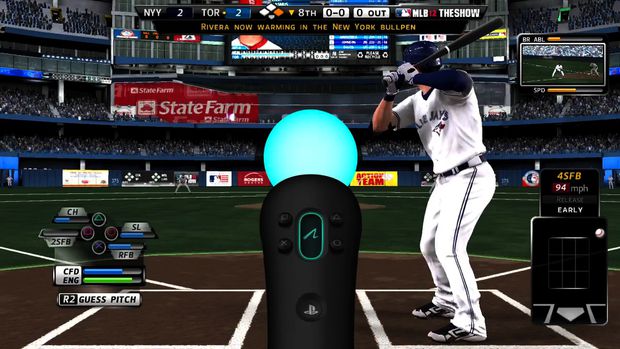 Move hitting is much more precise than it was last year, and it offers a much greater link between you and your on-screen avatar. MLB 11 only rendered a bat floating in the batter’s box; now you can see the hitter holding his Louisville Slugger. If you actually get up in front of your TV and assume a batting stance before the pitch, which is optional, the wand will vibrate to let you know that it “sees” you. Once it does, the in-game hitter moves the bat exactly as you move the wand. It’s an impressive implementation, forming a unique player-avatar connection that makes you go “whoa” the first time you see it.

MLB 12’s Move support is smart enough to distinguish between a contact swing and a power swing based on your own motion. If you quickly swing forward, as if you’re slapping at the ball, the game registers that as a contact swing. But if you move your hands back first, like you’re loading up to drive the ball, it will recognize that as a power swing. In either case, the speed at which you flick the wand forward determines the strength of the swing, so it’s still possible to hit a homer with a contact swing. Move even supports the franchise’s Guess Pitch function — you hold the trigger and point at a zone. 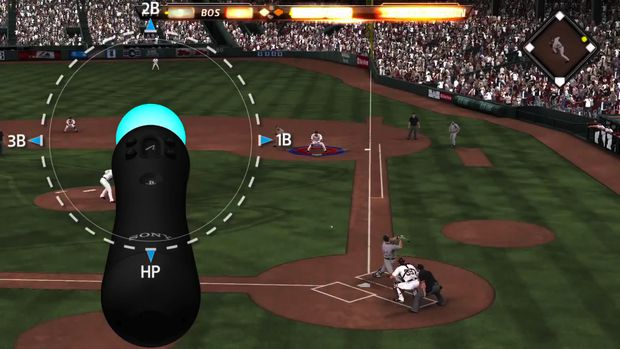 Fielding with Move requires less user input in one sense, but puts more responsibility on you in another. Once a hitter makes contact, the AI takes care of putting your defenders in position to field the ball; Cramm told me that moving fielders with the wand was simply too awkward. But that’s all the CPU will handle. MLB 12 does something that, to my knowledge, no other baseball game has done (except in the case of robbing home runs): it puts the onus on you to make the catch. A circle beneath a fielder changes from red to yellow to green to indicate timing; you pull the trigger to catch the ball when it’s green, and hitting it too early or too late will likely result in an error.

Now that fielders don’t automatically scoop balls up, Cramm noted, MLB 12 Move players might actually be surprised by a hot shot to the pitcher or third baseman. “If you don’t hit the trigger fast enough, the ball’s going to hit you in the face,” he said, and I definitely let a few line drives accidentally smash into my fielders. If you do make the catch, you flick right, up, left, or down while releasing the trigger to throw to first, second, third, or home, respectively. 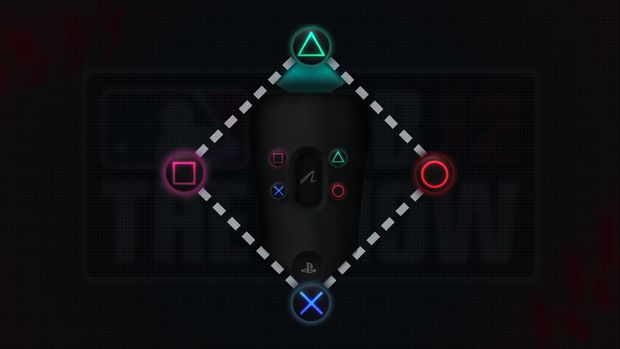 Running the bases with Move also brings in an aspect of real-life baseball. You control your baserunners with gestures similar to those used by a third-base coach. Waving the wand in a circular motion advances a runner, while swiping left and right tells him to return to a base. If you hold up the wand horizontally, the baserunner will stop at the next base, and if you hold the trigger while doing so, he’ll stop in his tracks. This aspect of MLB 12’s Move controls took the most time to get down, but I think that was mostly because I had difficulty keeping track of the different gestures.

I’m about as hardcore as they come as far as sports games go, and I assumed that MLB 12 wouldn’t be playable with PlayStation Move. But once I gave the motion controls a chance, I found that in addition to being satisfied with the experience, I was enjoying myself. Move might just surprise you, too.