At the Sega Booth during PAX Prime 2012, I was able to get a quick demo preview of The Cave, an upcoming puzzle platformer coming to both consoles and PC by Ron Gilbert and Double Fine. From first impressions, I immediately appreciated the graphical style and humorous attention to detail.

The demo I played gave me only a small glimpse of the direction the game is going in, though I came away slightly wondering at the overall difficulty of the various puzzles considering the way the game plays as opposed to Gilbert’s more traditional adventure games. 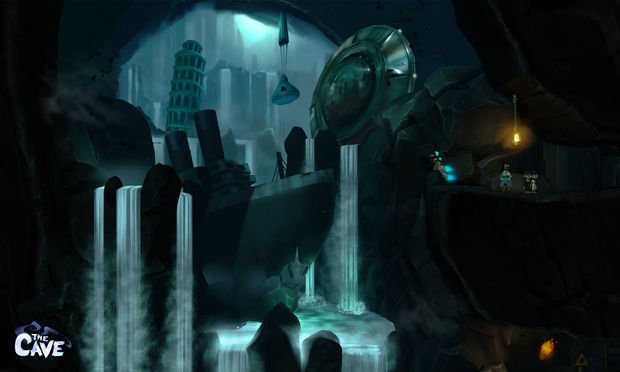 The Cave is a game that features seven eccentric characters: a Hillbilly, a Knight, Creepy Twins, a Time Traveler, an Adventurer, and a Monk. You play as three of these characters, and apparently in the actual game your choices in this matter will affect the kinds of caves you’ll be exploring, as each character is looking for something special to them (such as the twins seeking out their lost mother).

Therefore, you may have to play through the game more than once to solve all of the puzzles and play out the characters’ stories. You control a single character at a time, and as you progress through levels, you’ll find yourself switching between them in a style reminiscent of Gilbert’s Maniac Mansion in order to solve puzzles with appropriate timing.

When I began the demo, the cave for which the game is named gave me a brief welcome and tutorial, and I was free to wander around the vibrant, beautifully rendered environment. Based on first impressions, I noticed that all of the characters moved around at a pretty quick pace that isn’t usual to an adventure game, and that solving puzzles generally relied on finding objects in the environment and using them on other objects to progress deeper into the world. There is no real inventory management and the game plays like a platformer rather than a point-and-click adventure game. 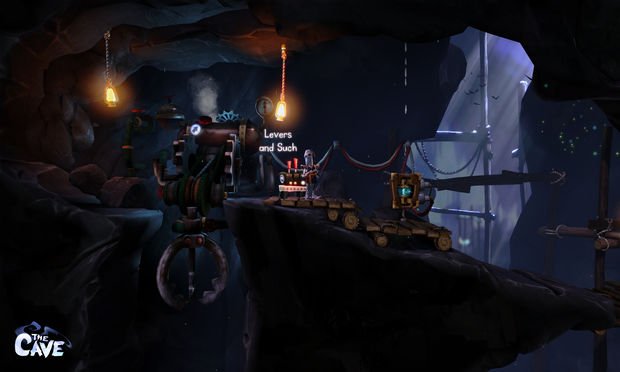 A good example of this: as I ran around with my knight, I found a fuse box that was powering a sort of claw machine over a pit of spikes. I knew from earlier in the level that I needed the fuse itself to power up some vending machines, though I wasn’t entirely sure what good this would do me. Getting the active fuse required first finding something to stop it from being live and dangerous, and so I went to an earlier point in the level and grabbed a bucket from a well to come back and catch water that was dropping onto the lively fuse. Once I got to the vending machines with the fuse, one of them dropped a hot dog. My knight picked this item up and carried it with him.

At this point, the need for your other characters starts to come into play. I knew that I couldn’t go further into the level without getting eaten by a giant monstrous lizard creature, and I also knew that the tasty hot dog would play into this whole equation somehow.

Between myself and the giant lizard was a deadly pit of spikes, so I decided to climb up and see if I could lure the beast right into the pit. Before using the hot dog, I realized I could possibly use the claw machine to grab the lizard when it came out to investigate. I brought my knight up to the top level of the cave where the mechanics for the claw machine sat.

I quickly realized that without the fuse, the machine was no longer active, so I got my second ‘set’ of characters into play, and brought the twins back to the vending machine to retrieve the fuse. I knew better than to drop the hot dog now, though I could imagine that if I had and needed another one, I’d have to use my third character to bring it back before taking the fuse out of the machine again with the twins. It’s this sort of item management that will surely play a key part of solving puzzles in the game. 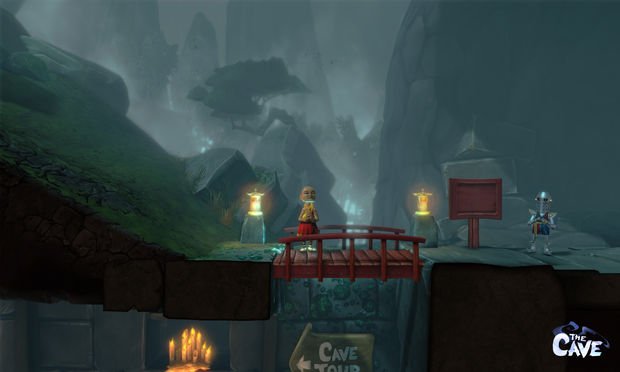 Once the fuse was back in place, I threw the hot dog onto the spikes. Still no dice. The monster needed to be alerted to its meal. Fortunately, at the same level as the spike pit was a bell that could be rung. The solution to the puzzle lay in bringing the knight up to the mechanical claw’s main gearbox while using another character to ring the bell. As soon as the lizard was alerted by the twins and wandered out to investigate, the knight pulled the lever, the claw descended, and soon one bellyaching lizard hung high in the air — safely granting the characters passage.

This is where the demo ended, and it didn’t exactly give me a great idea of the exact scope of the game. I solved the puzzles pretty quickly and they tended to feel like the sort of puzzles we’ve come to expect from both the adventure and puzzle-platformer genres.

Having said that, my time with the game was certainly enjoyable and the brief demo left me intrigued as to what the cave itself will symbolize for the various characters and their quests.