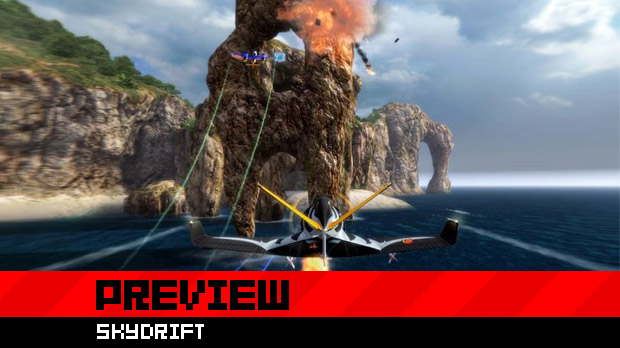 Far too many worthy downloadable titles go unplayed, which is why I’m worried about SkyDrift. I hadn’t heard of it before, and I’ll wager the same is true for most of you as well. It could absolutely release, get favorable reviews, and immediately disappear into obscurity two weeks later — and this wouldn’t be at all unusual.

Why am I so concerned with this game in particular? Because essentially, it’s like Hydro Thunder with planes. Any game with such a premise is one I don’t want to see fail.

Understandably, there’s more to SkyDrift than that. But on a basic level, fans of Midway’s rumble-loving boat racer will feel a connection to this upcoming arcade-style racer from Digital Reality.

SkyDrift has got an often intense pace to it, which is what I always look for in this type of experience. You steer with the left analog stick, and can tilt your plane — and do barrel rolls, if you’re so inclined — using the right. This allows for more intricate movement, which can sometimes be a requirement when flying through tight corridors.

On the whole, the controls are as responsive as they need to be; not once did I crash in-game and question anyone (or anything) but myself. (I have argued with my television more times than I care to talk about over the course of my game-playing life.) 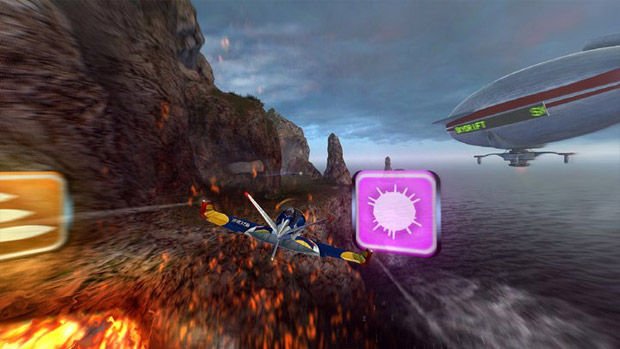 This isn’t just about racing, however. Littered throughout courses are power-ups, ranging from missiles, to floating mines, to shields, and more. You can only hold two power-up types at any given time in your queue, but picking up a second version of any equipped ability will upgrade it. Adding to the strategy even more, you can manually remove these items in exchange for a little bit of boost for your plane.

Boost is also acquired through destroying enemy players and performing tricks. One example of this would be flying incredibly low to the ground — that was pretty much my go-to, but there are quite a few other approaches.

Thankfully, getting destroyed isn’t overly punishing. You respawn right where you were in a matter of seconds. So while I wouldn’t recommend purposely flying into lava, you can crash more than a few times and still come back for the overall win, usually. I didn’t get a chance to play the multiplayer (it’s online), although the AI competitors seemed to put up a good fight on normal difficulty.

There are additional modes which gently tweak the formula, but I won’t go into those for this preview. I can say that if you’re into unlockables, SkyDrift has you covered, especially in terms of skins for your planes. 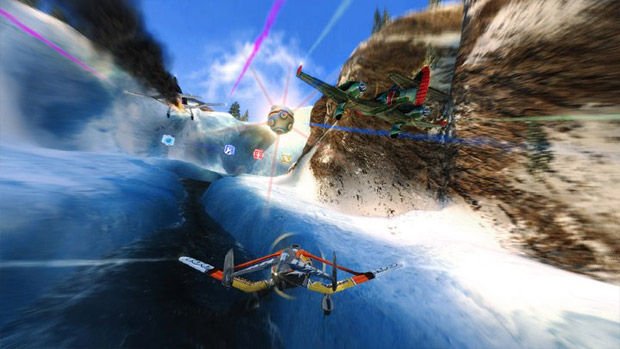 While there aren’t as many tracks as I would have liked, each and every one is incredibly well crafted. This was probably my favorite aspect of SkyDrift. Honestly, I’m surprised the team was given the green light to pursue this level of quality. It must’ve been a long design process, but it was so worth it.

The vibrant use of color is also to be commended. Booting this game up was a real eye-opener and served as a reminder that, even today, far too many games avoid blue skies and warm palettes. There may not be many separate levels, but there’s a total quality over quantity argument to be made here.

Overall, SkyDrift surprised me. Even though releases for console-bound digital distribution platforms have seen a bump in size and scope over the past few years, I was still caught off guard. Do give this one a try when it comes out early next month.