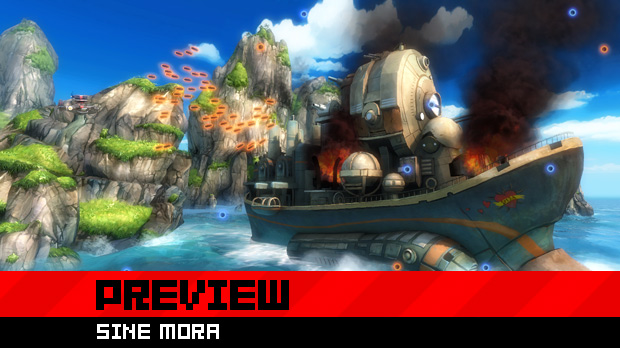 When a colorful “diesel punk” shoot ’em up enters the fray, you start to pay attention. When that game is co-developed by Digital Reality (Imperium Galactica, Haegemonia) and Grasshopper Manufacture (Killer 7, Shadows of the Damned), your eyes widen as foam starts to build up at the edge of your mouth.

Sine Mora tries to give its own twist on the 2D side-scrolling shmup formula, and it looks awesome in the process. It was a bit hard to gauge exactly what the game was all about before, but thankfully, the downloadable shooter could be found at gamescom — tucked away in a large nondescript booth filled with European projects.

Contrary to most 2D shmups of its kind, Sine Mora does away with health and hit points in favor of a time mechanic. Every level starts you off with a set amount of time that ticks ever downwards, sped up by taking hits from enemies or bullets. Killing enemies gives you extra seconds, so you have to try and shoot as many of them down as you can in order to stay alive and not run out of time.

Special power-ups will shield you from incoming attacks, reflect them, or give you ten extra seconds if you run out of time as an “extra life” type of mechanic. In the meantime you’ll still move your nimble ship around to blast everything in sight in the shmup tradition, picking up primary weapon upgrades from destroyed enemies until the screen is filled with bullets. If you die, your upgrades will float around until you pick them up again.

Sine Mora features three different planes to start you game with. Each plane has its own unique primary weapon and a choice between seven secondary weapons (e.g. missiles) depending on the “character” you choose at the start of the game. So instead of picking a character that is synonymous with the ship you select, you select both individually for more weapon combinations and increased replayability. You also need to choose one of three time manipulation devices that act a bit like super weapons.

Although the game is technically a 2D side-scroller, everything is rendered in 3D and looks great because of it. You still play it as a 2D shmup, but between boss fight sections and levels, your diesel punk ship flies around in the third dimension to give more life to the world.

Graphically and stylistically, Sine Mora looks great. Digital Reality is doing the programming and core design while Grasshopper is doing the art design and all the music, courtesy of Akira Yamaoka. Everything is constantly in motion, whether it’s your ship that transforms into a submarine to continue the fight underwater or the fish and plant life that are always active in the background.

Unsurprisingly, Yamaoka’s pumping soundtrack perfectly fits the rebellious and punk feel and aesthetic of the game. Initially, the game had Hungarian voice-overs as a placeholder, but Grasshopper liked the distinct sound of it so much that the final game will have all voices in Hungarian with subtitles for those who don’t speak it.

Shmups are generally not the most accessible or story-heavy games out there, though, and Digital Reality and Grasshopper are planning to change that with Sine Mora. A Story mode will give you the entire game with all its cutscenes and banter between characters during the gameplay, while an Arcade mode just gives you the levels without cutscenes and a vastly increased difficulty for the bullet hell enthusiasts.

It wouldn’t be a shmup without high scores, of course, so a rank system will keep track of everything. If you are more of a casual shmup fan, you can still just play the Story mode and enjoy what the game has to offer. But with variables for the ship, your secondary weapon, and time manipulation devices, there should be a ton of replayability for anyone regardless of whether you are a hardcore score whore or not.

Since this is mostly Digital Reality’s game at its core, it’s not really fair to call it a “Suda 51 game” because it’s more of a collaboration that draws on both studios’ strengths. Of course, having the Grasshopper name slapped on your title does wonders for exposure, even if Shadow of the Damned didn’t exactly sell very well.

Sine Mora looks like an amazing addition to the downloadable space, and you don’t even need to import it for your Japanese Xbox 360 when it comes out around the end of the year for XBLA and PSN.