Based on the tabletop wargame, Cyanide’s Confrontation brings the fantasy world of Aarklash to the virtual realm. The over-productive French studio which used to primarily work on the Cycling Manager series has diversified itself with some promising, yet flawed, titles in recent years. 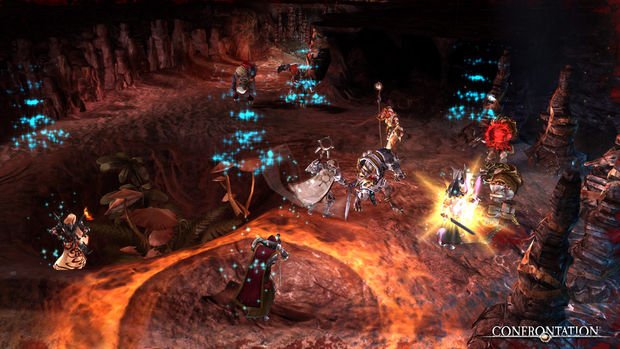 Following a lengthy introduction cinematic featuring perhaps the most entertainingly serious narrator of the past decade, you find yourself in the ravaged world of Aarklash. There is a war going on (peacetime sucks for action games) and your noble Griffin forces are battling the evil Scorpions for one reason or another.

Confrontation is somewhat of a bastard child of Baldur’s Gate and Dungeon Siege, using the active pause role-playing combat system of the former and the pace of progression through levels of the latter. With four characters under your command, and a wealth of characters to choose from in the full game, you can customize your force to fit your play style as you wish. Many characters fall in the typical tank, priest, mage, rogue, and other class categories, which helps to give you a basic idea of what the hell you’re doing.

Similar to Baldur’s Gate, simply selecting all units and right-clicking on one enemy in a group of enemies will quickly lead to at least one party member’s death. In many cases, you need to pause the game (spacebar) and select your individual heroes, followed by utilizing their special abilities and spells to give you the necessary edge in battle.

Abilities and spells cost energy, which comes in the form of SP, FP, and MP. MP (Mana) regenerates at a steady pace, while FP (Faith Points) regenerates faster when the hero is surrounded by allies. In practice, it means you can cast one or two spells at the start of a battle, with additional tactical options becoming available again depending on what classes you have in your squad, and how your squad is positioned.

These games can be immensely fun and satisfying to fun to play, especially when it’s a PC title that throws as many micromanagement options at you as you can handle. Confrontation does seem to be lacking in a few key areas that would’ve made this a surefire hit, however. 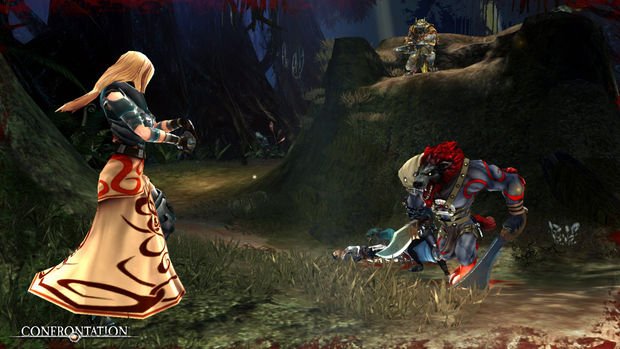 Disregarding the slightly aged graphical prowess available on even the highest settings, Confrontation insists on offering you a wealth of tactical options and menus without providing you adequate means to use them. While the F1-F4 keys let you swap between characters, and the same hotkeys are bound to each character’s individual abilities, it can be hard to distinguish between both your own characters and the abilities they have.

Sometimes one ability has to be cast on an ally to provide a buff, and another ability that looks similar is in fact an offensive spell you need to cast on an enemy target. Likewise, you start out with a team that quickly gains access to quite a few area combat buffs, but what they actually do and how they affect how combat plays out isn’t always very clearly communicated.

This problem of a lack of clarity is found elsewhere in the UI, too. The character sheet and inventory menus seem thrown together without much thought for best practices in usability, and there are a lot of aspects to tailor for each character. Then again, for those who will end up dedicating themselves to Confrontation, the amount of customization available might be a boon. 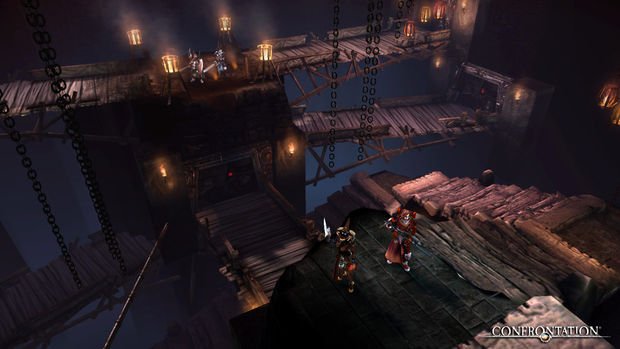 Each character has two weapon sets (melee and ranged, essentially) to fit their position in a squad. Sometimes the terrain doesn’t allow for open battle, forcing you to think about which characters to swap to ranged weaponry in tight quarters. Chests can yield weapon and armor points, which let you upgrade one of your character’s proficiencies. Do you want to focus on melee or ranged weaponry? Shields and defense or swords and offense? Physical damage reduction or magical armor? These decisions are made by choosing upgrade paths as you level up, offering a deep customization system for each hero.

When leveling up a character, many of the Advanced Dungeons & Dragons type of primary attributes can be increased. Wisdom and Intelligence are somewhat representative of the priest and mage attributes you might be familiar with, but they work slightly different in Confrontation. Both attributes provide bonuses to different types of colored magic — schools of magic if you will. Depending on whether you are building a support character whose focus is on casting buffs, or an offensive mage focusing on offensive magic, choosing the right attributes to level will likely end up being one of the most important aspects for your builds. Of course, specific skills can also be upgraded as you level up to increase their power.

Confrontation offers some interesting ideas by taking this approach to customization depth, providing a potential for a good amount of replayability and freedom to choose and create your ultimate squad of badasses, and seemingly offering hours worth of leveling and upgrading your heroes to perfection. It’s just a bit of a shame that it doesn’t quite look the part for this day and age, and that many of the UI and control systems prevent you from smoothly progressing through series of fights. 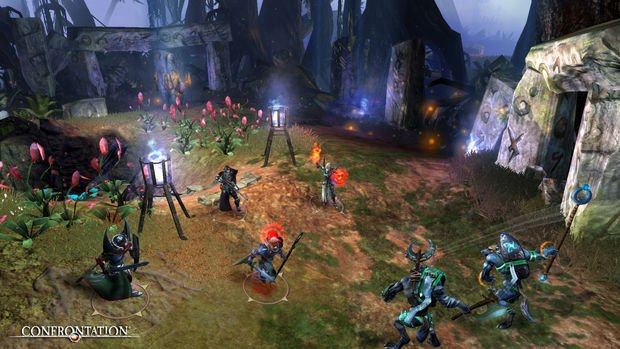 Despite this sense that the foundation of gameplay systems is solid, you can’t help but feel like the title could have used another year of polish to make it more accessible to play, and more enjoyable in the process. Like with Cyanide’s A Game of Thrones: Genesis, there are some excellent ideas here while the execution is less worthy of praise. With the release date coming up in two weeks, there’s a tiny chance that things may have been vastly improved over the build used for this preview, albeit not a very large one.

Confrontation is worth keeping an eye on if you are a lover of the genre who is willing to overlook the game’s faults in favor of some hardcore top-down RPG action, but it will probably have limited appeal outside of its niche audience.

Filed under... #Board Games#Role-Playing Games