Last week, Jonathan Holmes talked about a new advertisement for Orgarhythm, a combination rhythm and real-time strategy game he likened to a cross between Pikmin and Space Channel 5. I’m inclined to throw a Patapon comparison in there, too, but the former is fitting, given that Orgarhythm is being co-developed by Neilo. The newly founded Neilo is headed by Takashi Hirai, known for his work on Rez and Space Channel 5.

I got a chance to play Orgarhythm last week and quite enjoyed what I played. While not as delightfully trippy and out there as some of the aforementioned games, the mechanics were good and the beats engaging. Of course, that isn’t to say it’s not outlandish in its own right. After all, you play as the God of Light, trying to vanquish the God of Darkness through your musically-controlled minions. 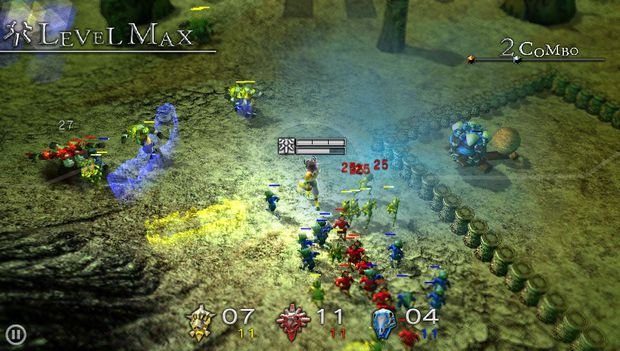 Yes, it’s that time in videogames again: time to be a god; this time, a god of music, as it were. The mechanics used to command your brightly colored horde are all touch-based. A translucent beat reverberates on screen, requiring you to simply tap it when it shrinks to its most minimal, in rhythm with the beat. After nailing the first tap, you can choose between activating your fire (red), earth (yellow), and water (blue) units. Additionally, in some instances you can choose a fourth option — to buff existing troops with things like higher health or increased damage output.

Once a unit color is selected via a well timed tap, you must choose which sort of attack you want the unit to perform (again, with a rhythmic tap). Here, you decide between standard melee, a ranged attack and a catapult. Melee attacks are performed most quickly, over the period of two beats, while ranged bow and arrows require four beats, and the catapult eight beats to set up and launch. The catapult also requires you have at least four minions of a particular color in order to use.

Once your method of attack it chosen, you draw (often a line) on the Vita’s screen and the selected units will fill that line and begin attacking when appropriate. The elements have a rock/paper/scissors relationship of effectiveness, with fire trumping earth and earth trumping water, so your units should be set up to face colored enemies accordingly. Minions are minions and, as such, expendable. The real aim is protecting you, the God of Light. Of course, keeping your minions alive and in strong numbers is the easiest way to do that. Hitting your beats perfectly raises your chain level, which in turn grants you more minions. The beats are also dynamic, quickening as your ranks begin to fill or the action ramps up. 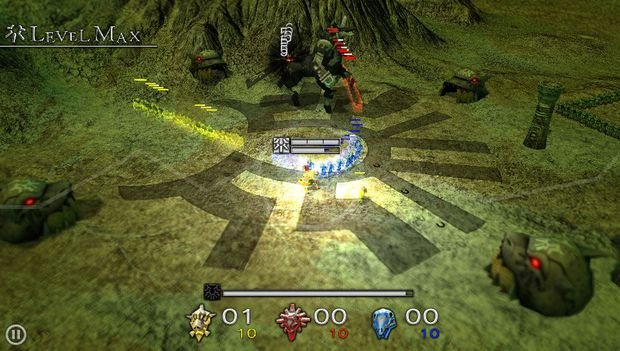 I played through the first of 12 slated levels and got through it relatively unscathed, despite not being particularly good at rhythm games (at least not as far as I’m aware), and finished with an A rank. There’s a thorough ranking system post-level completion bound to keep completionists playing. I was also told that the AI remembers how you play a particular level and will adjust enemy deployment and attack strategies accordingly, which, if it works as advertised, could keep levels worth going back to.

While I was surprised that I made it through the first level with ease, I dug the rhythmic, hypnotic beats and RTS elements, especially when I built up a nice queue of minions to send into the fray. There was also a pretty cool boss fight at the end of the stage against a bunch of giant, stone dragon heads. Along with the 12 stages the game is being launched with, DLC is being promised for the future. Most exciting, though, is the call for indie music-makers to submit tracks that could be featured in future DLC. Additionally, local and online co-op and versus modes will be available. In co-op, control over the minions is shared, while versus pits the God of Light directly against the God of Darkness.

As a fan of the PSP’s lovely Patapon franchise, I’m pretty excited to see another fine blend of rhythm and strategy hitting Sony’s new portable system. The twelve launch stages feels a bit slim, but otherwise I’m looking forward to delving into Orgarhythm later this year and hopefully losing myself in some hypnotic jams.