Q.U.B.E. is an upcoming independent first-person puzzle game that started life as a student project. The fact that it was playable at PAX Prime as an Indie Fund recipient should be all that needs to be said about how it has since grown.

Even in a post-Portal 2 world, I feel like there is a ton of growth to be had in this subgenre. The market hasn’t become crowded yet, which I suppose we should be thankful for. I have legitimately enjoyed every single puzzle title presented in a first-person view that I’ve ever touched. That goes for Q.U.B.E., too.

For Q.U.B.E. (“Quick Understanding of Block Extrusion”), Toxic Games is taking a not entirely unexpected approach to the story. Your character wakes up in a room made of white cubes, presumably as unaware of what is going on as you, the player.

What was being shown at PAX Prime appeared to just be the opening area, so it’s hard to tell how in depth the developers are going to go in terms of narrative. That said, I get the impression the aim here is to keep things fairly mysterious, possibly even through the ending. There weren’t any real instructions given in-game, with the hope being that the controls and mechanics are intuitive enough to not require explicit explanation — they were.

You have devices on both of your hands, which corresponded in this specific case to the Xbox 360 controller’s two triggers. As said earlier, rooms were built out of white blocks. These can’t be directly interacted with, but colored cubes can. This is the part where I suggest you watch the embedded video rather than have me write out how each block type works with your science gloves. 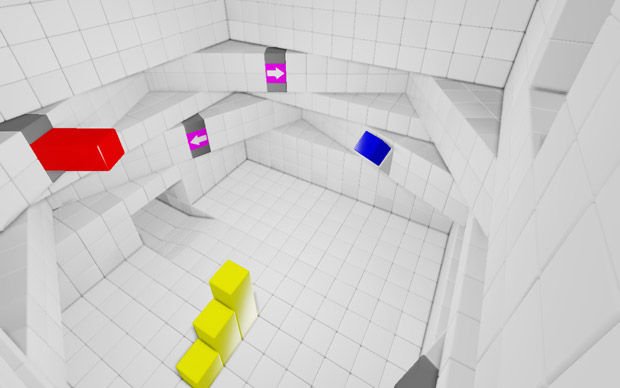 Know that there are a few different block types — and, potentially more that I didn’t get to see, based on that video — in Q.U.B.E. Using these to reach new areas was mostly straightforward. At one point in the demo, I had to use a couple of different types simultaneously to move a green block (which can’t be moved by your gloves) into the correct position.

There were also occasionally arrow signs scattered throughout rooms. Activating these, in the examples given, caused the layout of the room I was in to shift around. I didn’t get stuck for long on any one section, but I can absolutely see how this game could get significantly tough further in.

A couple of the challenges were focused more on accurate platforming than solving a tricky problem; I’m looking forward to seeing what this content mix is like in the full version.

From what the guys at Toxic Games were telling me, Q.U.B.E. could potentially be completed in one rather sizable play session, although I’ll be passing on that idea, thanks. I don’t know what the pricing will be like on this, but if it’s in the $10 – $20 range, I can see it doing quite well on Steam. Look for it (hopefully) in the next few months.