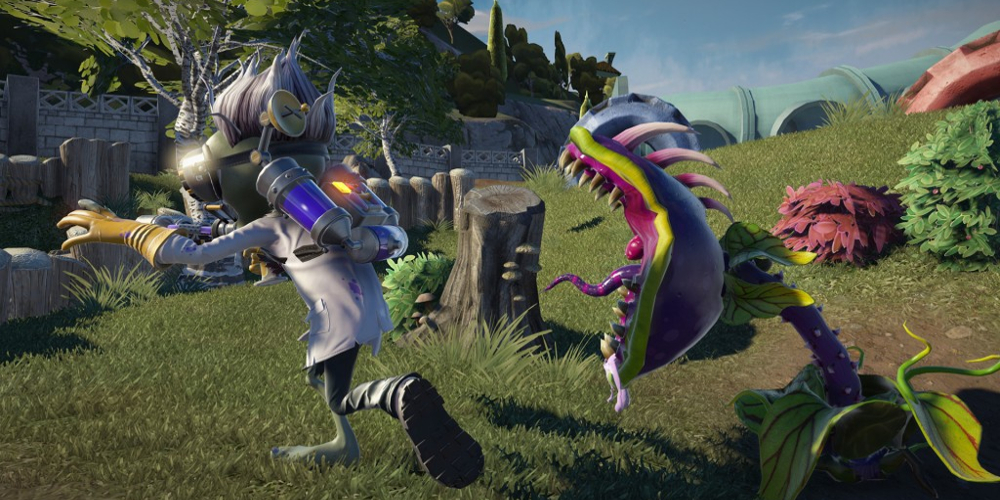 How weird was it seeing that reveal trailer for Plant vs Zombies: Garden Warfare at last year’s E3? Plants vs Zombies was known for its focus on strategy and quirky humor, so it was a pretty surprising move for the developers at PopCap Games to bring such an interesting twist to their hugely popular franchise. As a fan of the series, I was mostly curious to see how it would translate from a tower defense style game to an online focused shooter.

But strangely enough, the transition worked out surprisingly well. And then some. Using the Frostbite 3 engine, PopCap Games took a chance and made its first foray into 3D, bringing along many of its characters from the series. EA invited some the press out to try a new build of the class-based shooter Garden Warfare and it turns out it’s still just as strategic as ever.

If you need a narrative to help make sense of all this, here it is: plants have attained sentience and combat effectiveness, the dead have risen from their graves, and both sides must battle each other for dominance. Oh, and a crazy human gardener with a speech impediment is helping the plants. That’s pretty much all the story you need, and it fits perfectly along with the other entries in the series.

Taking cues from modern shooters, Plants Vs. Zombies: Garden Warfare is a third-person action game that utilizes a class and group based dynamic across several battlefields. Each side must work together to overcome the opposing players, and knowing your army’s strengths and the enemy’s weaknesses is the key to victory.

Let’s be clear, even though this is now a shooter, strategy and coordination is the name of the game. While you can manage to take out some enemies all by your lonesome, you can easily be overwhelmed by the opposition if you don’t use your arsenal of support plants and work with your team. Much like the previous games, picking and setting vital plants is necessary for success.

The game’s primary mode is the multiplayer, which is also the only way to play as the zombies. Players take on the role of either the Plants or Zombies and have to battle it out for dominance. Consisting of 12 on 12 skirmishes across 10 different maps, players will engage in game-types such as Gardens and Graveyards, where they can capture enemy points, and Team Vanquish, a take on the classic Team Deathmatch.

Along with the core character types are different variations of them. For instance, players can unlock fire and ice versions of the Cactus, which can do long-range status effect damage on the zombie force. In addition to these variations, players can unlock perks and skills that add new abilities and buffs for their classes. This not only helps to add more much flavor to the game, but gives more options for players and how they use their favorite class.

In addition to the robust multiplayer mode, players can also engage in the Garden Ops mode. Playing as the plants, Garden Ops is this PvZ’s spin on the horde mode game type. Players can team with up to three others online or locally to defend key points from AI controlled zombies across several maps. With a smaller group of players on your side, placement of the support plants is even more vital than in the competitive multiplayer mode.

Scattered across the field are plant pots, which can be used to summon support forces from your current arsenal of plants. Placement of the support units is key, as the zombies can easily overwhelm players. Many of the favorites return, such as the Wall-nut, Potato Mines, Gatling Peashooter, Fume-Shroom, Bonk Choy.

In keeping with previous entries of the series, Garden Warfare has a deep focus on maintaining your arsenal of plants, and after each battle players must keep their limited stock of characters in healthy supply. Players will gradually acquire coins from taking out enemies and completing dynamic match objectives, which can then be spent in the game’s sticker shop.

All this may sound odd, but stay with me on this one; stickers are collectable items that can be used to upgrade your characters and customize their appearance. In the shop, you can buy unique packs of character cards and sticker pieces ranging in price, and you will randomly receive a set to strengthen your reinforcements. Similar to packs of baseball cards, the content of each pack is unknown to the holder. Moreover, when you collect enough sticker pieces of the same type, you will unlock a new variant of that particular character.

The packs range in price, some focusing on cards or stickers, so players can spend coins only on what they need at the moment. If you only wan to refill support placements, then you can purchase the basic packs. Though if you’re feeling lucky, you can take your chances on the premium packs that drop rare stickers and cards for a high price.

It’s clear that Garden Warfare wishes to expand upon the characterization of each plant types, and this allows for players to customize their plant and zombie armies as they see fit. Character customization is deep and robust, and it shows how the devs at PopCap Games went to great lengths to flesh out the characters of the series. There are many unique variants of each class, and honestly you’d be surprised just how many different ways you can make the Sunflower character plant look. Many of which include hats, facepaint, and other quirky accessories.

The developers at PopCap Games have shown some extra attention to the Xbox One release of the game, including making split-screen play an Xbox One exclusive feature. I can imagine this will disappoint many fans, as it should, because playing local co-op and coordinating with my partner was a lot of fun. It’s definitely a missed opportunity to not include this with the other versions.

Another exclusive feature for the Xbox One is Boss Mode, where another player can use a tablet device and sync with SmartGlass to offer support for players during the Garden Ops gametype. While on the tablet, you’ll be playing as the returning character Crazy Dave, who will be able to offer support for players in battle. You get an overhead view of the map, similar to classic PvZ, and you can assist by dropping health pickups, place radar plants on the lookout for nearby zombies, revive downed players, and you can even call-in devastating air strikes.

After spending about an hour playing the Garden Ops game type locally, I came away impressed with Garden Warfare. In many ways, it feels like a fully-realized and expanded version of a Plants vs Zombies game. While many fans may turn their nose up at the focus on shooting, if they give it a chance they’ll likely see that the quirky humor and strategic gameplay that they’ve known and loved are still here.

While it’s very disappointing to see that the split-screen mode is only for the Xbox One release, I can still see much to like. In many ways, it felt like PopCap took some serious notes from Valve’s Team Fortress 2, as Garden Warfare is brimming with style and humor. On the surface, it looks to be a major shift into a new direction, but when you get down to it, it is very much in line with the series’ focus on strategy and character. And that’s all I needed to know.