When Hamza saw PlanetSide 2 at gamescom, he wet his pants a little from the excitement of it all. Truly, the scope is impressive: the size of the maps are mind boggling and 2,000 players fighting at once is a sight to behold.

As great as scale can be for a game like this, what caught my eye most was the exhaustive depth Sony Online is bringing with the moment-to-moment gameplay.

Currently playable in beta on PC, PlanetSide 2 is an MMOFPS, and like any MMO, the world is persistent; the battles are already being waged when you enter and continue long after you log off.

Once you choose from one of three factions, it’s a constant back and forth to take and retake territory from the other two factions. To keep any one group from being completely overrun, there is an allotted amount of map space, called warp gates, that can never be captured.

Capturing points takes a few different forms. Smaller outposts can be taken King of the Hill-style by simply keeping your people in place and the enemy out for a time, whereas lager bases take a more conquest-like approach with multiple objective markers to tackle to ultimately take one base. 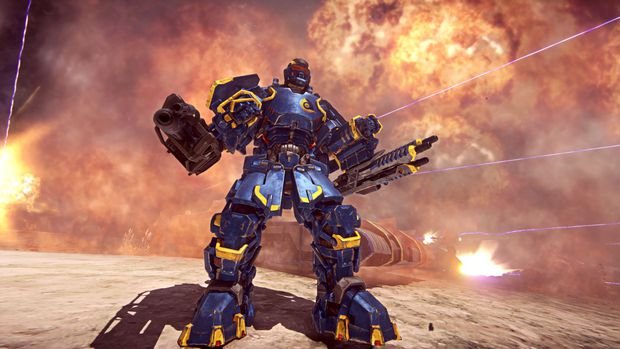 The whole tug of war here is for the sake of resources, and with it, the insane amount of customization options. There are four types of resources in PlanetSide 2, with the first three used to spawn vehicles and gain items that need replenishing such as grenades and health packs. The fourth is Auraxium, PlanetSide 2’s in-game currency for weapons, power items, and other permanent unlocks.

While this is a free-to-play game, SOE was adamant in pointing out that you can have a full experience without shelling out big bucks. All of the weapons and power items are only purchasable through Auraxium, which cannot be gained by way of micro-transactions. Rather, real-world money is spent on more benign offerings such as weapon camo and other cosmetic effects.

On the battlefield, you have a total of six classes to choose from. The MAX is a heavy weapons specialist that dual wields cannons and anti-vehicle weapons, but moves very slowly. The Heavy Assault is a gunner who can make himself invulnerable for a short while, while on the opposite end you have a the Light Assault who can move great distances with his jet pack, making him very mobile and a pain at mid ranges. The Infiltrator is a sniper and hacker who can go invisible for a time; the Engineer specializes in destroying and repairing vehicles; and lastly, the Medic heals and revives allies.

This type of class-based structure is not unique to PlanetSide 2, but what is unique is the insane amount of options you have to customize each of them. There are pages, literally, of guns, perks, camos and other goodies to make your character your own. Throw in 11 vehicle types, YouTube integration, forthcoming Twitch.tv support, clans, and stat tracking that can be viewed anywhere through an app, and it becomes apparent that there is more to PlanetSide 2’s scale than the geography.