The title of PixelJunk Shooter was a bit misleading. It was much more of an exploration and puzzle game than an actual shooter. It was a great game (along with its sequel), but not exactly what genre fans wanted. Sidecroller, however, is very much a straight-forward shmup and there is nothing wrong with that.

SideScroller is inspired by classic shmups that have come before it, while retaining the signature aesthetic and sound direction that has defined PixelJunk games. Although SideScroller started off as a genre experiment (see: PixelJunk Shooter 2’s bonus stage), it has developed into another stellar example of Q-Games stripping a genre down to its bare elements without losing any of the appeal.

Konami’s late-80s shmup-sidecrollers (Salamander, Gradius) are the most pronounced influences on Q-Games’ latest, but if you dig deeper you may be surprised by what else you’ll find. The first comparison my mind made was one to Harmful Park. I’ve gushed about that game elsewhere on the site, so I won’t go into too much detail on its history. Like the weapon system in Harmful Park, SideScroller gives you unlimited access to four primary weapons which you level-up individually.

This is one of my favorite touches in Harmful Park since it opens the doors to strategic play. It also keeps you from feeling the frustration of accidentally touching the laser power-up and losing your current powered weapon — Man, do I hate that! In SideScroller, you have lasers, a rapid-fire peashooter and bombs that shoot up and down. Just like Harmful Park, you switch between them with the triggers so you always have immediate access to them. Finally there is the charge attack: By holding down the back left-trigger for a couple seconds, you can send your ship spiraling toward enemies, destroying them, at hyperspeed (not sure if this can be powered-up). 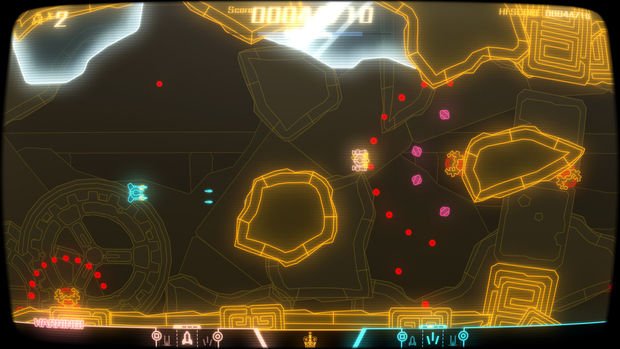 When SideScroller was shown at E3 earlier this year, the art direction looked surprisingly lazy for the graphical masterminds at PixelJunk. The game was clearly an early-prototype, reusing Shooter 2’s assets. As you can see in these screens, the current build of SideScroller has much more of a Tron/neon-colored vector-graphics look which suits the game really well. Not only do the visuals pop, but the new look help keeps the bullets distinguished from the backdrops. When you are racing to drop some lava on the ground or are making your way through a narrow tunnel amidst gunfire, you’ll appreciate this new change.

The same chemical elements of Shooter are at play in SideScroller but it hardly feels like a puzzle. Though, the game finds ways to keep the player thinking and fighting strategically. You’ll frequently come across environmental hazards that can only be destroyed with certain weapons. The same is true of some enemies and bosses, so you’ll have to spread your power-ups across your arsenal if you want to get very far. Once you have played the game through and have the levels memorized, it probably won’t provide much of a challenge. But, it makes for some tense encounters on the first playthrough, especially during bosses when you scramble to find the right weapon. 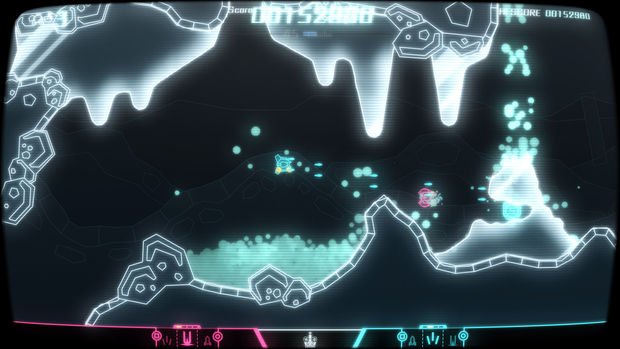 Although I walked away from SideScroller feeling mostly glee, I have a couple reservations that I hope will be addressed before its release. For a PixelJunk game, the music seemed a bit buried in the mix; it wasn’t up front and thumping like it should have been, especially for this type of game. Also, the constant checkpoints diminished some of the challenge that the game is trying to capture. Gradius and Gradius II are insanely difficult so I wouldn’t expect something like that — supposedly SideScroller was this hard during its early stages — but constant checkpoints in a shmup just rub me the wrong way. I rather have lives that let me respawn, even if that isn’t how Gradius did it.

Along with Sine More and Jamestown, SideScroller is helping bring shmups back to the masses while giving it a new paintjob. As a fan of the genre, I see nothing wrong with that.