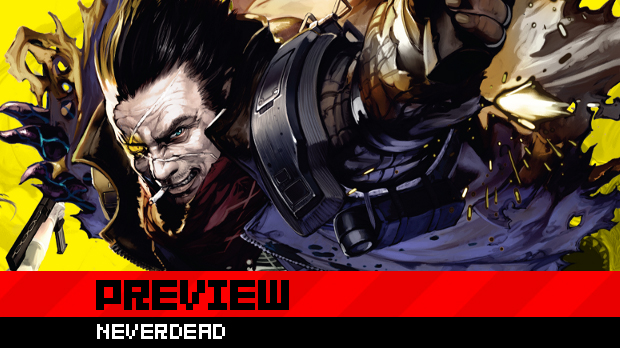 I’ve had my eye on NeverDead since the first trailer, yet at that brief introduction to the title few people I talked to seemed to share my enthusiasm and anticipation for the game. Meanwhile, I was digging the art direction, interesting premise and related gameplay mechanics, and the somewhat misanthropic lead.

As the months have gone on, the game seems to have slowly, intermittently blipped on peoples’ radar, mostly because it has drawn comparisons to the work of noted eccentric Suda 51 and has been (accurately) characterized as completely mental. After going hands-on with NeverDead and exploring the mechanics further, I’m only more hopeful for the finished product. 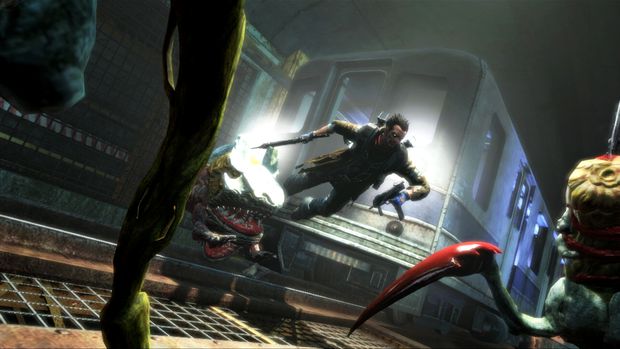 NeverDead puts the player in the shoes of Bryce Boltzmann, an immortal working with the National Anti-Demon Agency (NADA). 500 years ago, Bryce fell at the hands of the Demon King, losing his wife and being cursed with immortality in the process. Since then, he’s grown jaded, developing a sardonic, devil-may-care attitude. He’s also not above yelling out things like, “Can you lend me a hand?” when he loses an arm, which is fabulous.

Expectedly, Bryce’s immortality bleeds into the game mechanics. Bryce can — and will, frequently — be maimed or decapitated and continue fighting demons. Once a limb is lost on the battlefield, it will be conveniently outlined in white, making it easy to spot. To reattach it, Bryce needs only to do a standard roll move over the limb. Alternatively, there is an eyeball that shows up on the bottom right side of the screen when Bryce is missing a limb. When it turns yellow, holding L3 allows Bryce to automatically regenerate all lost body parts, which is sometimes necessary, as certain enemies will devour unattended limbs. 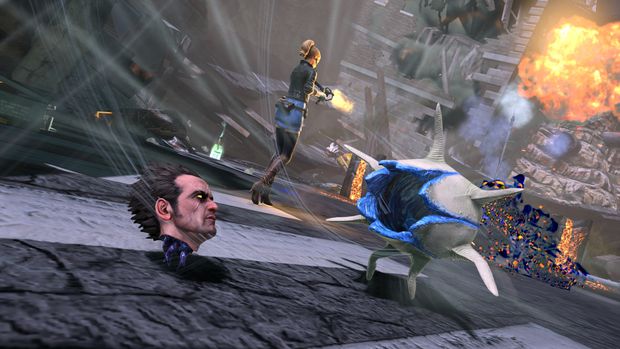 When Bryce is decapitated, he rolls around, semi awkwardly, as a head, still able to jump and use a charged up, Sonic-style roll dash. You can still collect your limbs in this state, as they attach to your head and haphazardly flail around like tentacles, but you’ll either need to fully regenerate with L3 or to find your torso if you want to be effective. Decapitated Bryce has his purposes; for instance, you can manually detach and throw your head to survey the surrounding area. There are also puzzles to solve that require Bryce’s head to roll around on its own, which, aside from being fun, remind me of a hilarious, macabre version of Samus in her morph ball form.

Despite his immortality, game overs with Bryce are still possible. The same enemies that grotesquely roll around and devour abandoned limbs will also go after Bryce’s head if he’s decapitated. Once sucked into the interminable belly of a demon, you’ll have a chance to escape with a quick button prompt mini-game, otherwise you’re sent back to the last checkpoint. The NADA also pairs its immortals (there’s at least one other among their fold that I’ve seen so far) with regular, perfectly killable agents, so you’ll have to make sure your partner, Arcadia Maximille, doesn’t kick the bucket. While that may raise trepidation in many of you, Arcadia didn’t die on me once. If she is gravely injured, you’re also afforded a brief period in which you can revive her back, and even that didn’t happen frequently enough to irritate me. Girl took care of herself in my time with the game. 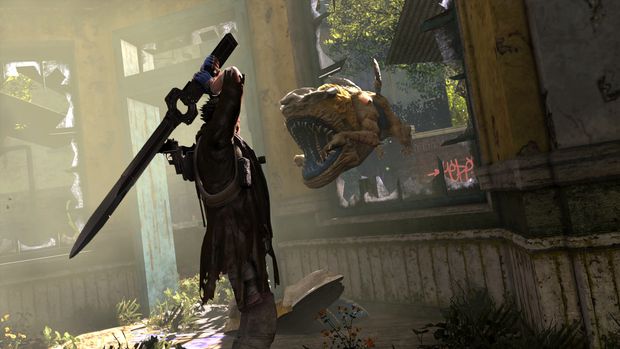 Bryce’s unique situation also makes for interesting demon fighting. While there are guns to equip that get progressively better as you progress through the game (you start with two dual-wielded handguns), simply shooting at demons doesn’t get you too far. Surprisingly, the game features pretty comprehensively destructible environments that often prove the best way to defeat swarms of demons. It’s sort of silly to see enormous pillars crashing down or walls exploding after a few gunshots, but it works, and fits the tone of the game nicely.

There’s also a deep upgrade system in the game that lets you buy both general physical augments — things like the ability to jump higher, do more damage — as well as new abilities, like the ability to detach your arm and use it like a grenade or to shoot fire bullets when you set yourself ablaze. Yes, lighting yourself on fire lets you shoot fire bullets. The abilities, purchased with XP gained from dispatching demons and picking up scattered collectibles (extra XP for finding hidden ones), can definitely change up how you play the game, as you’re only afforded so many assignable slots and can choose abilities that fit your play style.

My favorite part about the combat, however, was discovering the Butterfly Blade, which you can switch to at any time. With it readied, L1 locks onto enemies and the blade itself is controlled with the right analog stick, which felt incredibly satisfying. Rapid flicks of the stick unleash a bevy of quick strikes while more controlled movements allow you to do slower, stronger attacks and it just feels so damn good to use. You can also hold R1 simultaneously to block, but blocking is for wimps (c’mon, you’re immortal!). Aside from slicing the heck out of all the things, my favorite combat tactic was standing over a pile of explosive tanks, luring multiple enemies right to me, and then shooting the tanks, blowing all of us up in the process. 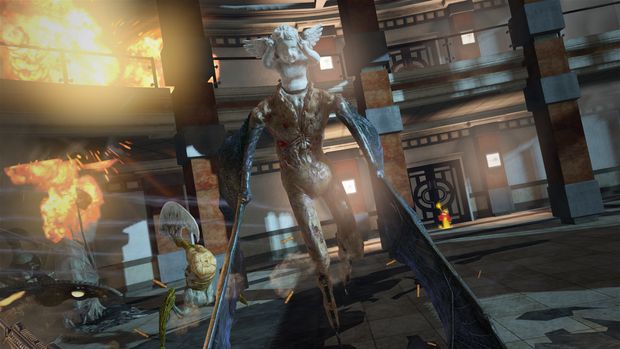 I’d be remiss if I didn’t talk about NeverDead’s inspired art design as well. The gruff Bryce, who sounds a bit like a drunk and brash Tim Allen, looks cool (as in “hip”) enough, but I love the creepy, purple tendrils that, apparently, hold his body together and protrude when he’s lost a limb. The enemy designs are even more insane, and I still get a kick out of their names: you’ll be fighting Spoons, Puppies, Pandas, and more. The puppies also seem to have cherub visages where you would expect their anuses to be. It’s all bananas and all very Lovecraftian. Even seemingly inconsequential things, like the 2D art on load screens, the box art, and the game’s use of the color yellow just exude a style that I’m completely enamored with.

I’ve heard a lot about NeverDead being “rough,” but I’m not sure that’s the best word for it. It just knows what it is, which is why everything you shoot in the game will explode or shatter in an unrealistic, terribly charming fashion. The visuals are a bit gritty and imperfect, but the aesthetic is unique and interesting, the vibrant colors are lovely to look at, and that grittiness is fitting with the overall tone of the game and its heavy-metal, Megadeth-boasting soundtrack.

NeverDead actually comes across as an apt embodiment of its disheveled lead. You can be a bit sloppy, get wrecked, and then keep coming back for more — and you can have a lot of fun doing it.