The last half of this generation has been extremely kind to fighting games. Street Fighter IV returned the series to form, newcomers joined the fray with BlazBlue, and my personal favorite fighting franchise experienced a much needed rebirth with last year’s Mortal Kombat.

The trend doesn’t show any signs of stopping, and continues on the handhelds with Mortal Kombat for the Vita. This isn’t a simple port, mind you. With all the costume and character DLC, as well as new outfits, modes, and Vita-specific controls, the only thing holding it back from being the definitive version is its gutted online play.

If you played the last Mortal Kombat, you should have a basic understanding of what to expect from its Vita iteration. Mortal Kombat 9 returned the series to its 2D roots, retold the story of the first three games, and brought a polished fighting system while keeping all of the gory hyper-violence intact.

Right out of the box, Mortal Kombat comes with all the DLC from the console version. That’s four characters, eight retro costumes, Kratos, and Sub Zero’s MK3 costume, all unlocked from the start. Also, players are not required to complete story mode to unlock Cyber Sub-Zero or Quan Chi, as they are also playable from the beginning. The biggest addition, in terms of content, is the Bonus Challenge Tower.

The Challenge Tower from the last MK tasked players with completing 300 challenges for Koins, and a promised secret prize upon completion. With its creative challenges, and difficult (sometimes excruciating) missions, it quickly became a fan favorite. Bonus Challenge Tower aims to accomplish the same, focusing exclusively on challenges that incorporate the Vita’s touch screen and accelerometer.

The first mission NetherRealm showed, called Missile Mayhem, cast players as Scorpion fighting against Sektor. The twist was that players are constantly attacked by falling missiles, that you either must dodge or detonate prematurely by tapping them. Now while this part of the demo was hands off, it warrants mention that moving your fingers back and forth from the d-pad to the screen looked awkward. Especially considering that you still have to focus on fighting. 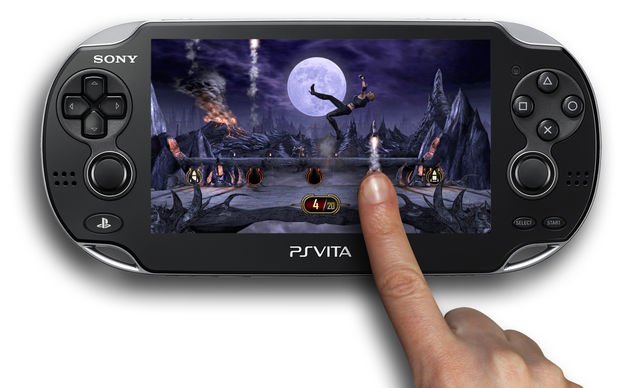 The next challenge we played was another versus match, except whenever your character would land a hit or take one, blood would splatter on the screen. The only way to restore your view is to make quick wiping motions across the screen. This is actually a pretty clever idea, being both a smarter way to use touch controls, and a good fit to Mortal Kombat’s hyper-violent tone.

Our final look at the Bonus Challenge Tower was an interesting one, a new addition to the “Test Your” series called Test Your Balance. This challenge has your characters high up on a plank above a pit. Using the Vita’s accelerometer, players will have to tilt the Vita to balance their character as body parts are thrown at them. Fail and you fall into the pit, where a unique death sequence waits for you each time. In this particular challenge, failure meant watching Jade fall into a giant saw blade, cutting her into two clean pieces.

Overall, Bonus Challenge Tower is a welcome addition, and actually has a better-structured rewards system. The Tower in Mortal Kombat 9 offered Koins for each successfully completed mission, but only one prize awarded at the very end. The Bonus Challenge Tower offers Koins in addition to a total of sixteen extra costumes, awarded over the course of 150 challenges. The additional costumes also include — long overdue — alternates for the DLC characters. Personally, my fingers are crossed that NetherRealm will bring them to the console versions as well.

The fighting system in Mortal Kombat remains as fast and intense as it did on consoles. Running at a constant 60 frames per second, the game mirrors its console brethren. Button for button, all the combos that you spent time mastering can be pulled off here. In my hands-on time with the game, I had no difficulty performing any of my Scorpion or Kung Lao combos. Mortal Kombat on Vita will also come with the same gameplay tweaks and patches that the console versions are running on now. There are no block infinites, 77% Cyrax combos, or overpowered Kung Laos to be found here.

The only addition to the fighting system are the touch controls. Since fighting games require accuracy and precision more so than other genres, NetherRealm has, thankfully, kept the touch controls to a minimum. When you have a full meter, players can simply touch their meter to perform an X-ray. It’s not ideal for comboing into an X-ray, but the touch controls (in actual combat) were made with casual players in mind, exactly who you wouldn’t see leading into an X-ray with a combo. Rest assured, you can still press the shoulder buttons to perform an X-ray.

Fatalities can also be performed with touch controls, and are pretty simple to use. So if you win a match with, say, Scorpion, you can swipe your finger, back, forward, back, and then tap the X button to perform his fatality if you don’t want to go for the standard input. The screen reads your swipes accurately, so either option is viable.

It’s nice to see thoughtful use of the touch controls, rather than cramming them in because you can, which is actually why Mortal Kombat for Vita will not be using the rear touch pad, or use the touch controls to pull off enhanced supers. When asked why, NetherRealm stated that they did not want any touch controls that would interfere with the moment-by-moment fighting. Using the back touch pad lead to people performing moves they didn’t intend, and using the touch pad for enhanced supers yielded similar results, so they were both cut.

Finally, there is the multiplayer. Mortal Kombat on Vita supports local ad hoc via Bluetooth in addition to online over PlayStation Network. While player and ranked matches make their return, the lobby and King of the Hill modes that made the console version such fun are not making the jump. I’m not going to lie, that really sucks to hear. As a player who logged a good 5,000 matches into the console iteration, I am really disappointed to see the King of the Hill lobbies go away. It’s how I spent most of my time online, and I fear that the Vita’s MK online experience will be the lesser for it.

Still, with all the great new additions to this version, you can not argue that NetherRealm isn’t working to do right by fighting game fans who plan on getting the Vita. If you didn’t like Mortal Kombat 9 (crazy talk, I know) when it was released last year, there’s nothing here to change your mind. But if you’re getting a Vita and enjoy fast-paced, gory, accessible fighting games with plenty of depth to master, you’d be a fool not to keep this portable version on your radar.