The yearly appearance of the Madden franchise seems to be a constant in the videogame industry, acting as a reminder to football fans everywhere that the new season is right around the corner. Except, potentially, this year, when the fate of a full NFL season still hangs tenuously in the balance.

After six months of hearing about CBAs, lockouts, and the inability of business professionals to find an agreeable model with which to split billions of dollars, getting my hands on Madden 12 at EA’s Summer Showcase was like receiving a warm, comforting hug. 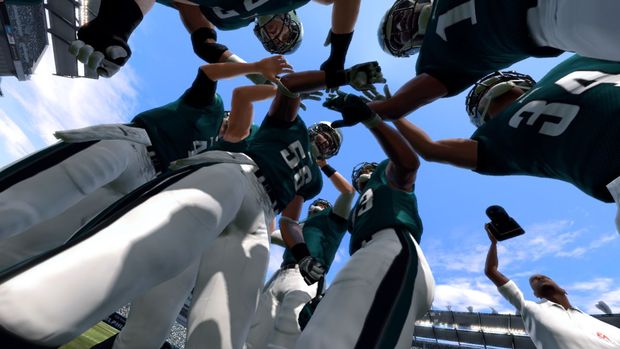 The first thing that struck me while playing Madden 12 was the attention paid to presentation. In the past, the franchise has proudly paraded small advancements meant to help the player truly feel like they’re in the game, but those attempts pale in comparison to the revamped presentation. All of the teams’ unique intros have been faithfully recreated, aided by consultation with the NFL’s official camera crew.

These dynamic camera angles — often times unique to each individual stadium — are surprisingly apt at upping the intensity of an aspect of the game that is usually hastily skipped over by players. They also serve to help emphasize one of EA’s main goals with Madden 12, which is bringing “gameday football” into the living room. A few other camera tricks help emphasize this point. Kickoffs, for example, are displayed in a panoramic side-view, as you would see on television, before the camera warps around to the traditional gameplay view; the camera angle for field goals also has been pulled out some. They’re small, seemingly inconsequential touches, but they actually helped me appreciate the size and scope of the stadium, even if the crowd is still largely composed of simply modeled, “cardboard” fans. 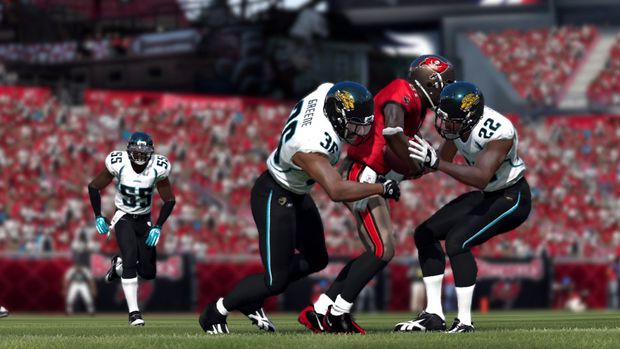 While these subtle alterations to the presentation help to serve EA’s goal of bringing true to life football into the living room, they are ultimately secondary to the gameplay. Thankfully, the core gameplay is where I found some of the biggest advancements that the series has seen, which translates into a more faithful recreation of the game fans know and love.

When I finally began playing a game, pitting my St. Louis Rams against a computer-controlled Baltimore Ravens team (on “Pro” difficulty), I was a bit surprised by how much more visceral the game felt relative to previous iterations. The reason for this change, I would soon realize, is the completely revamped animation system. In past Madden games, animations would often begin before players made contact, which would lead to awkward, sometimes frustrating moments where players seemed to inexplicably “warp” into each other, ignoring the distances between them as if they were compelled by some sort of “suction” or magnetism.

In my hands-on time with Madden 12, I found that irritating abnormality is no more, as animations don’t kick in until players have made contact. Aside from making the game feel more realistic, I also felt a lot more satisfaction in player movement and interaction. Every hit seemed to carry an appropriate sense of weight, despite not being powered by a physics engine (something EA’s Anthony Dimento mentioned that the team would be looking into in the future), and tackling is infinitely more rewarding because of it, even when you don’t use the hit stick. 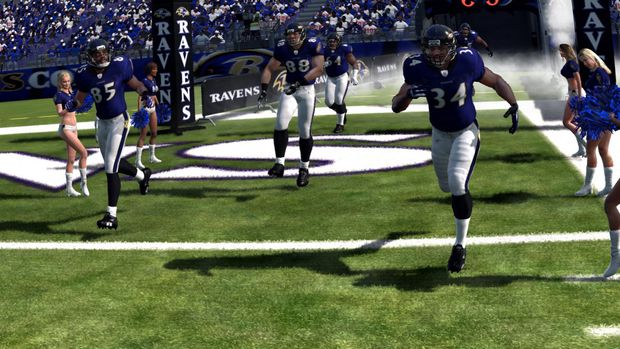 Whether due to the implantation of the new animation system or simple AI tweaking, there are other noticeable improvements over last year’s title. The secondary seems to play much better when in zone defense, replacing the ineffectual zone defense of Madden 11, and route running seems to have been cleaned up a bit. I also felt like my players were much more competent blockers, while, at the same time, screen plays seemed to be a much less cheap offensive tactic. I also spot-checked the game’s All-Madden difficulty setting by playing two quarters against the Pittsburgh Steelers and, while I was down 10-3 at halftime, All-Madden seems much more reasonable and less frustrating than in previous iterations. A game and half is nowhere near enough time to render judgment on balancing, particularly when there are hundreds of plays I left untouched, but my hands-on time left me fairly optimistic.

The two other new features the core game rolls out are custom playbooks and Dynamic Player Performance. Okay, the option to create and use custom playbooks isn’t a new feature — they were in the game last generation — but their return is definitely a welcomed (re)addition, and something that fans have been clamoring for since the feature was removed.

The Dynamic Player Performance system is meant to lend itself to true-to-life accuracy. There is a set list of tendencies that players can have, which are tied to the player’s stats. These tendencies can alter a player’s performance mid-game. For example, putting a lot of pressure on Bears QB Jay Cutler could negatively affect his accuracy, while putting an equal amount of pressure on Tom Brady might go unnoticed by the clutch, stoic pocket passer. While I only got a brief taste of this system, it has the potential to add some authenticity to player performance independent of statistics and add an extra little wrinkle of strategy to the game. 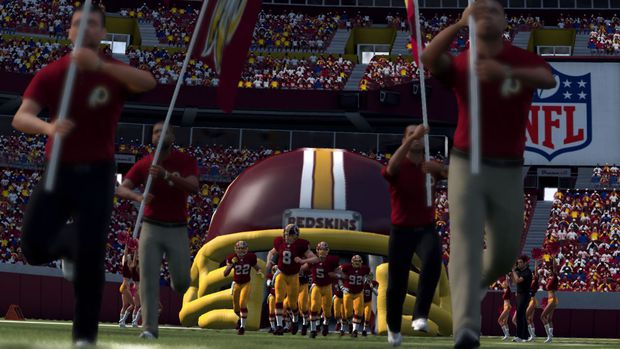 In an attempt to weave the new system into the core gameplay more subtly, the announcers’ commentary on the game is supposed to clue the player into these changes in real-time. While interesting in theory, it was much easier to simply access the start menu, where the effects of the system are prominently displayed. As a long time Madden player, I basically subconsciously tune out the announcers, as you tend to hear the same commentary ad nauseam after playing for any considerable amount of time. On a related note, I was pleasantly surprised to hear much more new commentary overall, much of which was player-specific and involved a bit of banter between Gus Johnson and Cris Collinsworth. It’s bound to get old eventually, but it seemed like there was more new content added this time around, so it should last a bit longer than usual.

Perhaps disappointing to some, the online franchise mode has been largely unchanged from last year’s game, though I was assured the rest of the modes have seen “substantial upgrades,” including the previously ignored offline franchise mode. A bit of good news for future Madden games: Dimento mentioned that the team is bridging the gap between the online and offline franchise modes, which means that new feature implementation will no longer have to be done two separate times. This hopefully means that the two modes will see simultaneously advancement in the future, as opposed to one always seemingly being left out in the cold.

One addition to online connectivity is online communities, which are going to be formally announced and detailed July 15. Dimento could only describe them as “a way for gamers to really get together and play Madden the way they want to play it, with the people they want to play with, adding that social aspect that’s been so huge. This is our answer to that, and how we’re going to capture that audience.”

Perhaps it’s just a symptom of my regular yearning for football by this time of year, but I walked away excited for Madden 12. Whether or not the tweaks to the game distinguish it enough from past iterations in the long run, when the veneer and novelty of newness wears off, remains to be seen, but Madden 12 is aiming to be a fresh experience in the franchise, an aim that’s helped along by how much better and more responsive the game feels when playing.