Burn the ocean on Mac, PC, and tablets

I’m such a big fan of nautical combat that I continued to play Assassin’s Creed III — a game that bored me beyond belief within the first two hours — just for the ship missions. So when Leviathan: Warships was announced just over a week ago at the Paradox Convention in Reykjavik, you could say that my interested was piqued.

That it turned out to be a turn-based co-op strategy romp with cross-platform play between PC, Mac, and tablets was the icing on the cake. I donned my captain’s hat, went head to head against another writer, and came up with all manner of excuses when he blew up all of my ships. 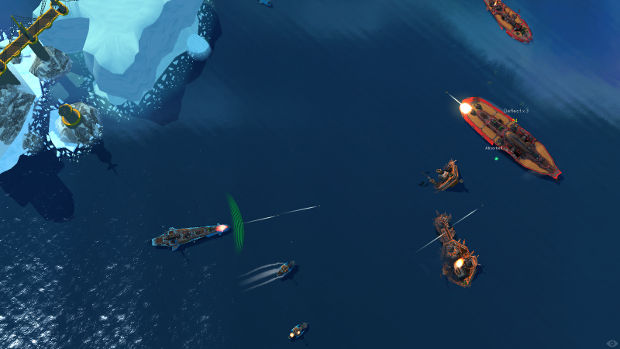 There’s war on the high seas — at least, I think it’s war. I’m not particularly certain what’s really going on in Leviathan’s somewhat ill-defined setting. There are multiple factions — only one playable during the event — and they all have their own quirks and styles, but I don’t have the foggiest idea why they are blowing each other up.

After a quick presentation on the importance of cross-platform play and how Pieces and Paradox are trying to open up games to everyone, I got to sit down in front of a PC and actually attempt to play the thing, specifically a 1 vs 1 multiplayer match. It’s not as simple as just jumping into a battle, however — not if you want to survive. There’s planning to be done, and if nothing else, I do love a spot of management.

Fleet sizes are based on a points system rather than just a set number of ships, so two “large fleets” might actually have a different number of ships, but one side may have more guns and fewer vessels, while the other might have a veritable armada, with each ship only holding a small supply of armaments. 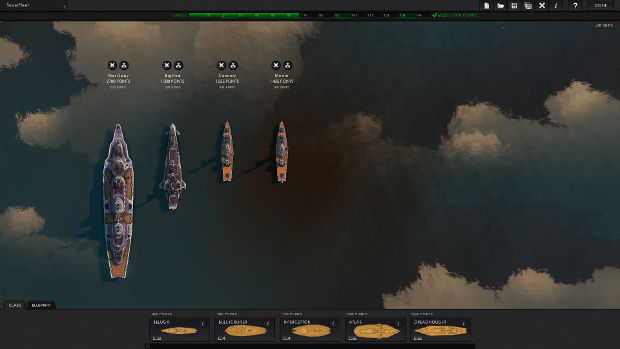 Not only can guns of all shapes and sizes, from rocket launchers to beam cannons, be placed on a ship’s hard points, beneficial mods like shields and cloaks can also be attached. While all weapons and mods can be slotted onto any class of vessel, some work better with certain ships.

The hulking, great big Dreadnaught, for instance, is slow moving and will likely spend most of its time quite far back from the front line, so it makes more sense to give it heavy-hitting, long-range weapons, while the quick Scout benefits from things like the cloak and close-range guns.

There are a vast array of options, and that’s before you even start augmenting the hull of the ships. So I could have probably done with a bit more time to figure out what the hell does what, but that was not a luxury I had. I hastily fitted out my fleet with the coolest-looking toys, and jumped into my first multiplayer match. 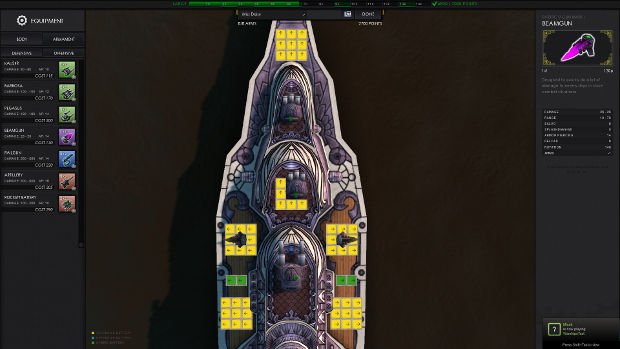 I made a fatal error straight away. I mistook the fluffy black edges of the tiny map for fog of war, and sailed right into the abyss. Apparently that causes ships damage, and before I knew what I was even doing, two of my vessels were in dire straits. Oh well, a lesson well learned.

Battles are broken up into two kinds of phases. I started off by assigning orders to my individual ships using the convenient radial menu during the planning phase, which brought up all potential actions, from using my various guns, to commanding my ship where to go and what direction to face in. After that, the action phase begins, and I saw my little toy armada slowly make its way across the azure battlefield.

Unfortunately, the action phase was absurdly short. It lasted for only 10 seconds, and then the planning phase began anew. This works well during actual combat, as tweaks and changes are necessary to react to enemy attacks and movements, but it made actually getting to the combat incredibly arduous. 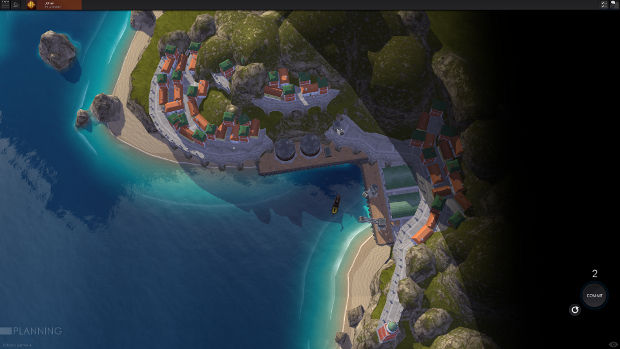 Finally, I spotted my dreaded foe, and promptly launched a barrage of rockets from my Dreadnaught. These did bugger all damage, lamentably, as my opponent had opted to shield the side of his ship in anticipation of my assault. Shields can be applied to the port, starboard, stern, and bow of the ship, but cannot be activated all at once.

My faster ships had weapons on their bows, so I made them rush to engage the enemy head on. My lumbering Dreadnaught was all about the broadside attacks, however, as I had fixed most of my heavy hitting cannons on its port side, so I slowly had to reposition it. Turning a ship is painfully slow, which may be quite realistic, but it’s not much fun in a game where the action phase is measured in a handful of seconds.

All guns are limited by a maximum, and often minimum range, so positioning is of the utmost importance. My opponent understood this far better than I, and jumped me with a sneak attack from the stern of my slow Dreadnaught. As he got in close, I realized that I had not added a single close-range weapon to my titan, and despite its stalwart hull, there was little I could do to rid me of the pesky smaller ship harassing me.

My other vessels had managed to dispatch one enemy ship with their front-mounted beam weapons, but were close to blowing up themselves. I cursed my earlier error of sending them to the edge of the world. By the end of the next action phase I was down to one ship, and about all I could do was use my shields. 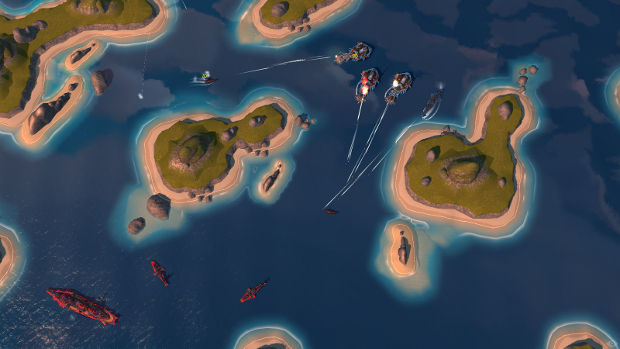 As my final craft sank to the bottom of the ocean, my last thought was how I wished I’d spent more time building my fleet. Every gun counts, and you have to be ready for whatever your enemy might throw at you.

Leviathan’s draw will likely be its asynchronous cross-platform multiplayer, despite it also providing single-player challenges. While these battles may drag on a bit, as players wait for their opponents and allies to make a move, one can play as many matches as they want against a myriad of human opponents. This will certainly be convenient for those playing on a tablet, as they could quickly make their moves while on the bus, during a lunch break, or, more than likely, while sitting on the loo.

I’m not sold on the PC side of things, unfortunately. PC players will be getting a nearly identical experience but paying significantly more than their tablet brethren, and the asynchronous play coupled with the short length of the battles seems more tailored for those playing on mobile platforms like the iPad.