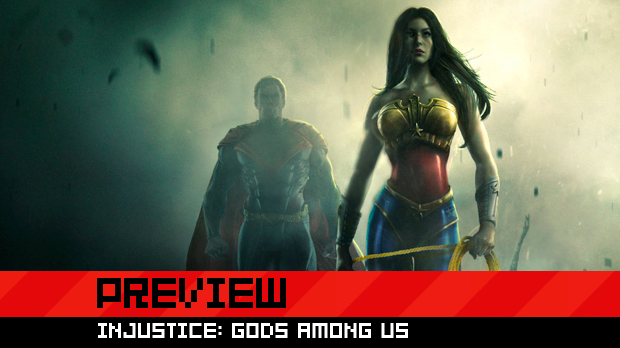 Injustice: Gods Among Us is a fighting game that brings together the DC Universe characters for a beatdown festival that only world-class superheroes and villains could give us. Ed Boon himself showed it off to select press recently, and it was there where he said that he wanted to introduce new fighting game features that would move the genre forward.

He may have succeeded, and along with that created a virtual test ground to settle arguments that have been plaguing nerdkind for ages. 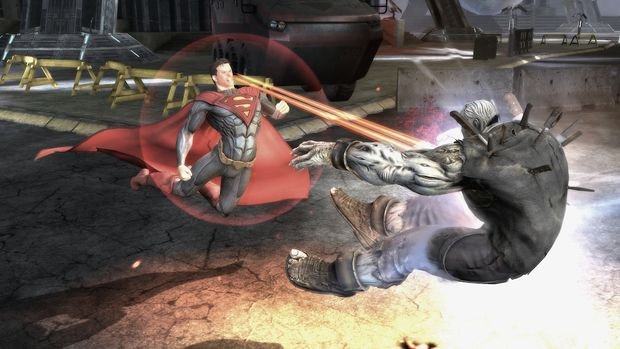 The first battle we saw had Superman going up against Solomon Grundy. Both looked to be a fair bit larger than your standard fighting game character, and the artwork for the characters and the stage leaned more toward photorealism than comics or animation. That’s not to say that these guys took up too much screen space, but they definitely gave an impression of being bigger and badder, which actually works towards them being superheroes and villains.

Boon told us that one of the goals of Injustice was to make the stages as pivotal as the characters are. Superman and Grundy fought in the Batcave, where there were plenty of interactive points to change the balance of battle. Fighting actually causes damage to the backgrounds, and in this case some punches near containers for Batman’s Batsuits caused them to break, releasing hand grenades that could be picked up by either fighter and used in battle. The far right side of the stage also featured a console with a large red button on it, and when a fighter is backed into this corner, the button gets pressed, sending missiles flying out to hit the other fighter. Consider yourself warned, corner trappers.

The stages in Injustice all have multiple tiers. In the Superman vs. Solomon Grundy battle, a punch from the Man of Steel sends Grundy down into the floor, through it and into a lower level of the Batcave. There were even more background objects to use in this section. For example, Grundy used a floating power generator to attack Superman, bashing it over his head. The assault continues with a super move: Grundy grabs Superman, smashes him to the ground, pulls out a gravestone from his chest, and hits him over the head. 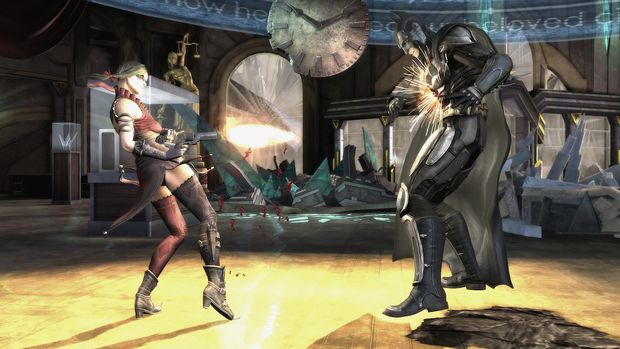 Superman’s comeback super move was quite a bit more exciting. His eyes turn angry red, and then he picks up Grundy and punches him into space, sending him flying through the clouds and into the stratosphere. The view pans out into space, where we see Grundy start to sink down towards Earth at high speed. The view follows as he crashes through the roof of the Batcave back into the stage, where Superman finishes him off.

The next demonstration, a fight between Batman and Wonder Woman, made the previous one seem tame. Batman has all his neat toys, like his grapple gun and Batarang, which he can throw forward or upward. Wonder Woman has two fighting states to make full use of her most popular equipment. Her lasso mode has her being more of a ranged fighter, but with her sword and shield she has some very SoulCalibur-ish, close-ranged moves.

In this stage, which was a wide open city street-style arena, Batman found himself backed into a corner where there just happened to be a car. He used that car to his advantage by taking Wonder Woman’s head and bashing it into the car’s body. Another option for him would have been to throw explosives into the car to blow up on his opponent. Wonder Woman, on the other hand, would have picked up the car to slam it over Batman’s head. 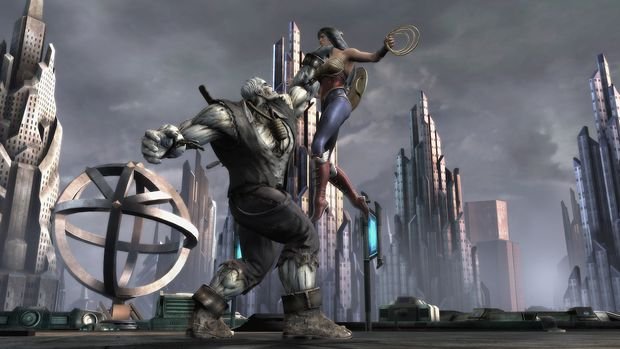 For as good as the fighting was, the stage was really the highlight of the match. This city stage features three arenas: one street scene, another two blocks away on the top of a building, and the last in the reception area of a building. The fun lies in how you get to these areas of the stage, though.

We saw Batman kick Wonder Woman at an upward angle, sending her out of the stage’s first area, up into the sky, through several floors of a nearby skyscraper, out the other end of that building, and onto the roof of another. The fight continued there for a bit until Batman turned really mad. He used his grappling hook to grab Wonder Woman and slam her down through some 30 stories of this building, and we watched on, laughing, as she continued to plummet down in this cross section view until she hit the ground floor, where the fight continued. To finish her off, Batman kicked her backwards, sending her back to the stage’s first area,  knocking her through other buildings’ plumbing and pipes, with her knocking her head on several of them. Batman finally ends it by hanging her upside down with his grappling hook to kick her.

While what we saw of Injustice was fantastic (and hilarious), there are still plenty of questions to be answered. We’ve only seen four characters of the full roster (Harley Quinn and The Flash have also been announced), and we have next to nothing on story details. Boon did let on that the story will explain how, say, Superman could take a beating from Batman. We’ll have to wait for that, though.

So far, Injustice looks to be right in line with what any fan of the Justice League would want in a fighting game. Through it, the timeless “who would win in a fight between X and X” questions can now be answered definitively.  With a modified Mortal Kombat engine behind it, and its focus on ridiculous superhero-type super moves and crazy multi-tiered stages, Injustice: Gods Among Us could take fighting games to a new level. See what I did there?

I’ll get a chance to get my hands on Injustice next week at E3. Stay tuned.