I had some concerns about the future of inFamous: Second Son last year. When it slipped from the PS4 launch window, I was disappointed, but not necessarily worried yet. It wasn’t until I began to see the game in action that the worry crept in. While it certainly looked better than past series games even from early on, it didn’t seem to have that effortless movement and power that you’d expect from a superhero-type game. Actually, I thought it looked a bit clunky in its first showings.

My first brief hands on was especially worrying as the control was so rough that I had to hand the controller off to someone else to even see the rest of the demo.

But my first full hands-on session with Second Son this week put my worries at ease. This is the bigger, badder, flashier inFamous that I’ve been wanting. 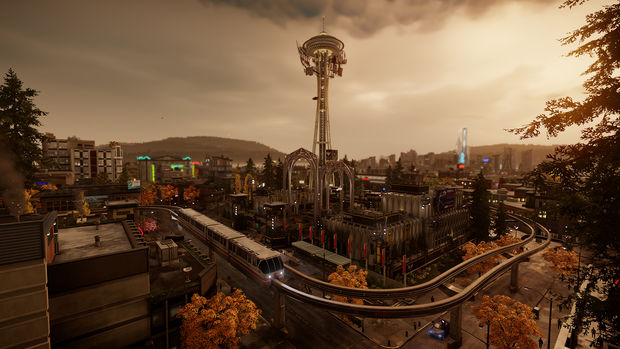 Delsin Rowe, Second Son‘s protagonist, has the one-man destructive force bit down pat as a Conduit. He not only has special elemental powers, but also the ability to draw power from other Conduits. But for as powerful as he is, he still needs your help to guide his choices in inFamous: Second Son.

The ability to be able to choose between good and evil isn’t new to action games, but when the protagonist has as much power at their disposal as Delsin does, this choice becomes a bit more interesting. It’s not difficult for Delsin to lay waste to everything around him in a single move, so his destructive power becomes a bit of an obstacle when there are innocent bystanders nearby. In one part of our demo, Delsin has to make his way through a traffic tunnel, taking out DUP forces on the way. Getting through while trying not not to harm innocents requires very careful aiming and control.

On the other hand, being the villainous guy that mows down everything in sight may be a role that’s really easy to get to at first, if you’re like me you might start to feel at least a little bit of guilt over your choices when you’re stepping over the bodies of civilians caught in the crossfire. Or not. I guess that depends on what kind of person you are. 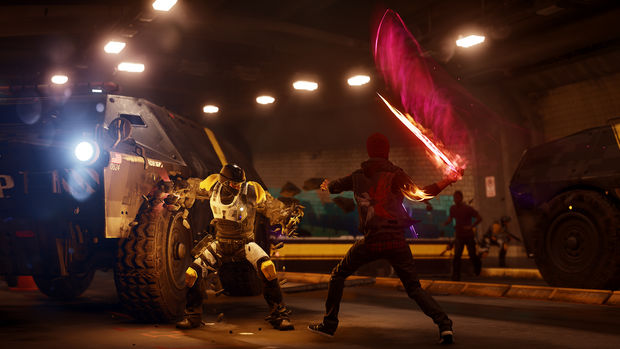 I tried to be both during this demo, playing through the same segment as both a good and corrupted Delsin to check out the differences. inFamous: Second Son gives you the freedom to jump that line continually through its free combat and open-world, mission-based game structure, but there are also key decisions you’ll have to make a call on, and your choices have a real impact on how the story plays out.

The demo starts off with a confrontation with Delsin’s brother over another caught Conduit, named Abigail “Fetch” Walker.” It seems that the plan is to put Fetch away for something she’s done, but Delsin steps in to save her. What’s interesting is that the choice isn’t wether to save Fetch or not, but what to do with her after she is saved. 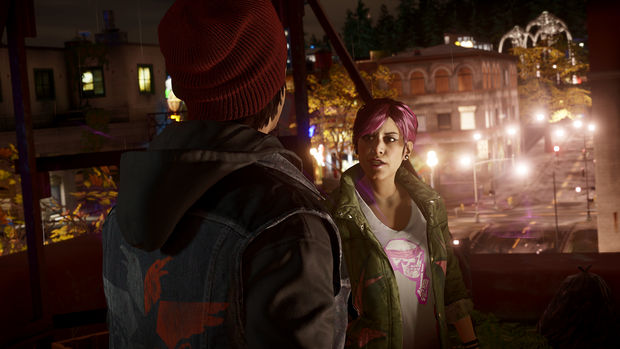 By pressing L2 or R2, Delsin can choose to either try to redeem or further corrupt Fetch. While the combat and play structure are mostly the same either way, choices take you down completely different paths, where you’ll take on different missions in unique locations. The dialogue and cutscenes are also unique to each path.

For the path of redemption, Delsin wants Fetch to let go of her hatred and anger, which is presumably attached to her being a Conduit and an outcast. Their mission has them out to bust some drug smugglers by raiding house boats. Those that have played past inFamous titles would feel right at home here, running down waypoints to complete the mission, taking down armed enemies along the way.

Delsin’s ability to take out small armies of enemies relies on his supernatural powers. Only a couple of Delsin’s powers were available in this demo, though — Sucker Punch says that they’re saving some surprises for us. His smoke powers let him send flaming projectiles, double jump boost, and even teleport through smokestacks. But, for as cool as these powers are, they pale in comparison to Delsin’s neon abilities. By drawing power from any neon signage, Delsin can blast orbs of light as projectiles, swing a sort of plasma sword, pound the ground with an area-of-attack punch, and more. 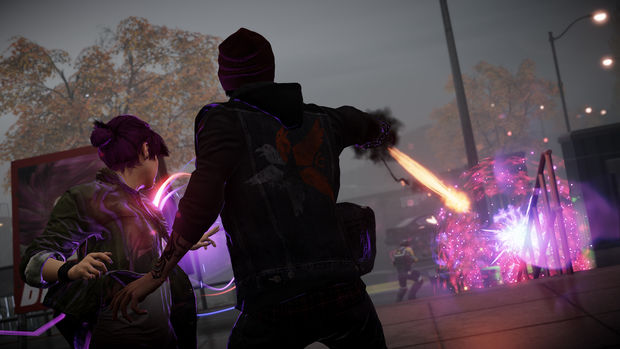 I used these abilities to fend off what seemed to be dozens of drug smugglers and guards on the docks in this session. Being a nighttime mission, it was somewhat difficult to see all of the enemies hiding in the surrounding boats and buildings, but this darkness served to accentuate how fantastic Delsin’s neon powers look. The screen goes from near darkness to eye-searingly bright flashes and streaks when neon power is used, making these attacks look flashy and impressive. These neon blasts and streaks are so bright that I found myself squinting a bit while playing.

inFamous: Second Son‘s combat feels appropriately responsive. I had no trouble going one-on-dozens with either my ranged or close attacks, though it did take me awhile to get used honing in on the feel of getting the projectile attack’s reticle to land in the right place. Between the character and camera movement, it didn’t take long before I found myself doing neon-powered head shots.

The light blade close-ranged attack is fast and powerful, and I liked that it was tuned in to feel like an attack straight from a hack-and-slash game. After some practice, I had the coordination to be able to quickly mix up the ranged and distance attacks, which made it much easier to take down big gangs of enemies. This is where the one-man walking badass thing clicked, and this feeling is what makes inFamous games so much fun. 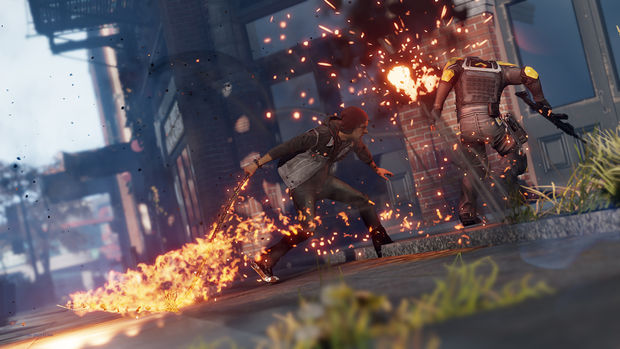 Enemy targeting could be keyed in a bit more, though. I had a lot of swings and shots at empty air early on. To have missed distance attacks would be one thing, but the close-ranged attacks had me swinging at air often. Watching some of my peers play, I saw that they seemed to be having the same problem.

For as cool as the neon-powered attacks are, the mobility perk it brings is what will keep you coming back to this power. By holding down a button, the resulting speed burst has Delsin’s mobility improving several times over. Using this, running forward leaves a flashy trail of neon light as he blurs on forward, and taking that movement into a wall has him quickly scaling it. With this neon movement, Delsin breezes over obstacles effortlessly; there’s no need for jumping and climbing to get around, which makes exploration very easy.

As this mission continues, Delsin tags the found drug shipments to be blown up by Fetch, using her laser-like powers. It continues into a chase mission that has him showing a sneak peek of an attack so powerful that it borders on ridiculous. 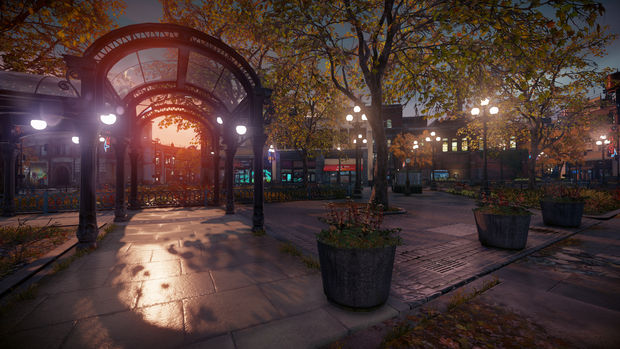 Starting over, going down the path of corruption, Delsin and Fetch blow off some steam by taking on protesting anti-Conduit activists by crashing rallies spread all over Seattle. The goal seemed to be to go in and eliminate the DUP forces, but being that this branch follows a darker path, the dialogue between the two seemed to encourage taking out the protesters as well. Following this guidance, I let loose, mowing down anyone I came across.

During fights, smaller instances of player choice pop up. By picking one of two button prompts, the player can choose to either obliterate or subdue enemies and others around the city. The evil choice has you smashing subjects to smithereens using your powers, while subduing might have you taking out their kneecaps and binding them, but not killing them.

These and other choices are reflected in the double bird icon at the top left corner of the screen. Depending on which way your actions lean, one of the birds will gradually overcome the other, giving you a visual indication of your karmic standing. This standing affects gameplay in other ways. For example, those on the good side of the karma scales will get a bit of a slow-motion aiming perk for projectile shots, letting them aim at enemies’ kneecaps for proper subduing. But if you’re out to kill everything, don’t expect this kind of perk.

And speaking of killing everything, the darker path of this demo also ended in a spectacular final move from Delsin. It’s so crazily exaggerated and powerful that I’d hate to spoil it for you. 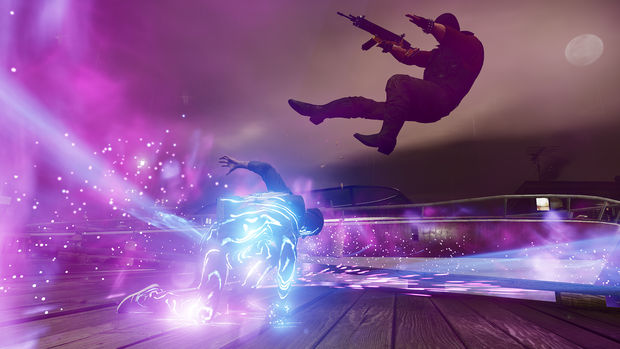 The character dialogue was a highlight of both playthroughs. Troy Baker nails the voice of Delsin, riding that cool-but-cocky line perfectly. There’s a lot of funny banter between Delsin and Fetch during these missions, and they never stop taking cracks at each other. The smart writing in their cutscenes had me wanting to see more of their interactions.

I really like the idea of how moral choices in the story can affect both the development of Delsin’s powers and character. This is not groundbreaking stuff, but it is another layer stacked on top of the satisfying everyday superhero kind of game that Second Son is. I’m hoping that the main story path choices branch so far apart that we’re really getting two fully separate stories, as that’s great for replay value.

Either way, I’m fine with more inFamous. The extra layers and the spit polish that I guess Sucker Punch has been adding since the game was pushed back are definitely appreciated, but the main draw here is being able to run around and blow shit up on my PS4. That’s all I really wanted. I’m glad to see that it looks like that is exactly what we’re getting.