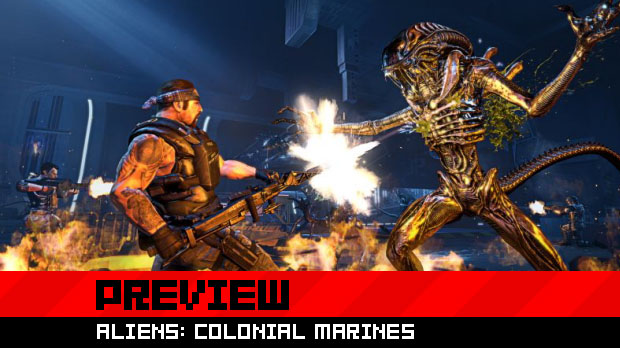 Aliens: Colonial Marines is quite an ambitious project for Gearbox, especially from a narrative perspective. It is, after all, a canonical sequel to Aliens, considered by many to be among the greatest science fiction movies ever created. Much has been made of the game’s story campaign, to the point where you’d be forgiven for not realizing there’s a competitive multiplayer element.

Not only that, but competitive multiplayer pits teams of marines against teams of Xenomorphs.

Yes, I felt damp in my panties. 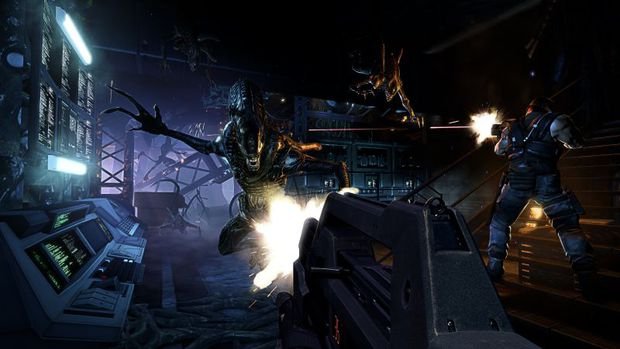 Aliens: Colonial Marines‘ multiplayer will feature many modes, ranging from simple deathmatches to a host of objective-led contests. Freely admitting inspiration from Left 4 Dead, Gearbox has worked hard to create two very distinct forces to battle out across these modes. Unfortunately, we were only allowed to play as the marines, but that didn’t do much to stop me from having a good time.

From the Marine perspective, you have a very traditional first-person shooter experience. Pulse rifles and shotguns provide the kind of gameplay you’ve likely played often. It’s solid, it does the job, but it’s not exactly breaking any new ground. There’s an experience system with unlockable equipment, as one expects from modern multiplayer games, and Gearbox has confirmed that actions in both the narrative campaign and the online modes will influence each other. Equipment unlocked during solo play will also be used in multiplayer, and vice versa.

In many ways, it would not be unfair to liken Colonial Marines to Call of Duty, with its range of player challenges, upgrade system, and conventional shooting action. Of course, there’s one major difference that sets it worlds apart — the other players don’t have guns. They have little mouths in their big mouths that bite your mouth off of your face. 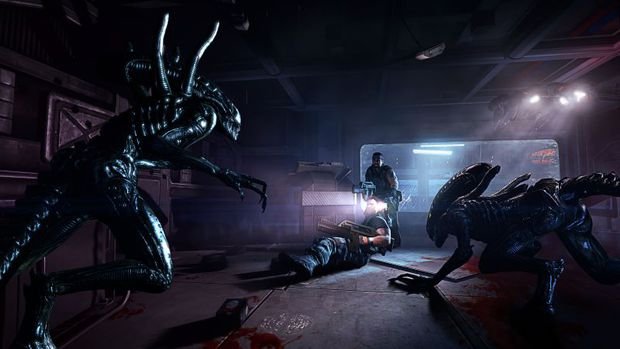 Played from a third-person perspective, the Xenomorphs are — literally and figuratively — worlds apart from the Marines. As human players use ranged fire to keep the bugs at bay, the Xenos must exploit the environment and work together to close in on their prey. There’s a very nice balance at play; at range, the Xenomorphs are defenseless, but if they get close enough, a Marine will need pure luck to survive. Xenomorphs can leap huge distances, and cling to any surface at the press of a button (their movement was likened to “Assassin’s Creed“), allowing them to sneak up on unsuspecting opponents and take them out in a range of wonderfully vicious ways.

As a Marine, this changes the game from a humdrum shooter to something infinitely more frantic and panic-inducing. With the opposition skittering along ceilings, jumping entire stories, and crawling out through vents, you’ll constantly have to stick with your team and keep running. Unlike 2010’s Aliens vs. Predator, the Marines aren’t ridiculously powerful. An isolated player is a dead player. Only by fighting smart and keeping on the move will a human team succeed. That, and making use of the motion tracker. There’s no HUD in Colonial Marines, and you’ll need to tap a shoulder button to bring up the tracker and get a rough idea where the bugs are coming from.

There are multiple Xenomorph species for players to use, most of which can be selected on a whim with each respawn. The Crusher, however, is a supremely powerful creature that can be controlled with a pickup found in the environment. This brand of Xeno is an oversized, bull-like alien with a large head designed for doing exactly what its name implies. Those playing as Marines are alerted to the Crusher’s presence by a sinister roar that echoes throughout the map. Once you hear it, you know things are going to get very bad. 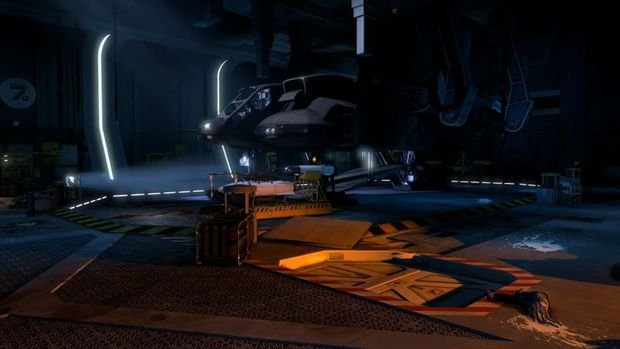 The Crusher is very reminiscent of the Tank in Left 4 Dead, including its foreboding aural cue. Incredibly powerful, tough to take down, and able to bowl through a team in a single charge, the Crusher provides a highly intense combat experience. At one point, I was stuck in a corridor with one rushing toward me. I was able to sidestep at the last minute, and turned to find it had already altered its course and knocked me to the ground. Their speed and their strength make them very scary prospects, and it’s a huge relief to finally take it out.

Although it’s too early to get a full idea of what Colonial Marines can do, the game already looks beautiful and feels impressively solid. Marines are heavy and their weapons are meaty. There’s a lot of fun to be had in mowing down five Xenomorphs in a row, only to get your head cut off by the one you didn’t see. My one worry at the moment is that there won’t quite be enough creatures on the Xeno side to keep the feeling of panic high for the human team, but we’ve only seen the most bog-standard of multiplayer modes so far. Hopefully there are some other gametypes that really exploit the “Left 4 Dead with Xenomorphs” vibe that Gearbox is going for. It’s the type of game I’ve wanted for years, after all.

With a commitment to authenticity, utterly beautiful representations of the Xenomorphs’ fluid movements, and some panic-inducing thrills, I very much like where Aliens: Colonial Marines‘ multiplayer is going, and if Gearbox builds upon what is here, I see this easily becoming my online game of choice for 2012.

You can count this Aliens obsessive very excited.