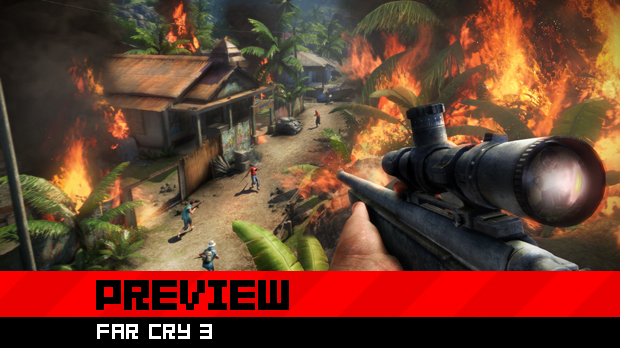 The original Far Cry was an incredibly fun experience, with a varied deadly tropical landscape and relatively intelligent A.I. opponents for the time. The gameplay was both challenging and continuously engaging, and made me a fan of the series from early on. I even played and enjoyed the lowly console port spin-offs with long names, such as Far Cry Instincts: Predator.

Then Far Cry 2 came along, and my love affair slowly died. Though I appreciated the vast landscapes and the reactive environmental effects such as spreading grassland fires and seeing the sparse glimpses of wildlife that ran away when it noticed you, I found the missions to be paced too far apart and the constant traveling to be burdensome at best, and an absolute bore at worst.

When I began to hear more about Ubisoft’s latest foray into an expansive first-person shooter environment, I held a few concerns that the gameplay would feature much of what we’ve come to expect from the series’ recent iteration, including the long periods of traveling and a storyline that wasn’t very engaging.

At a recent Ubisoft extended hands-on press event for Far Cry 3, I quickly learned that the experience far exceeds those expectations, and the series may in fact be back on track in returning to what made running through tropical environments and causing chaos so much fun in the first place.

Far Cry 3 starts with a bang — quite literally, as M.I.A.’s “Paper Planes” accompanies a montage of your character and his friends having an “extreme” vacation at a tropical island named Rook Island, the environment you’ll be spending your next several hours in. The montage ends suddenly with a seeming graphical glitch, and the camera pans away from a smartphone where the montage was running as a movie that you’re being shown by Vaas, the island’s resident psychopath. You find yourself caged like an animal next to your brother, Grant. Apparently a former marine, he quickly takes control of the situation as soon as Vaas turns his back. Grant loosens his shackles and frees you from yours, and as Vaas leaves Grant distracts the posted guard to come over and then brutally kills him.

Pretty soon, you find yourself sneaking through an encampment of Vaas’ guerrilla soldiers. This section of the game plays as a tutorial of sorts, teaching you how to throw rocks to distract guards and sneak through areas without being seen. Admittedly, the PC build I played crashed a few times through this part because of unforeseen graphic driver compatibility issues — though this turned out not to be too bad, as each run through afforded another look at the incredibly detailed environment.

Graphically, the game shines the most in all of the seemingly insignificant things that the developers have crammed into each area, and this especially shows throughout the intro tutorial. As you hide behind walls and under boulders, you notice both mundane things such as chickens running about or the minutiae of the small village you’re in, as well gruesome events such as hanged prisoners and at one point in the distance you see Vas himself picking off the rest of the survivors with a handgun point-blank.

I won’t spoil too much about what happens after this, but some time passes and you wake up and find yourself under the concerned care of Dennis Rogers, a Liberian National who has found community with the warriors of Rook Island and your allies. At this point, the game opens up and I feel this is where I really got a sense for how Far Cry 3 plays.

One of the first real missions I played involved finding a nearby broken down radio tower and fixing the signal for the village that has taken you in. The mission was simple enough — I had to find a way to the radio tower and then climb up it to repair the main electrical box. Of course, on the way there I got a little distracted with the local fauna and picked a fight with a few wild hogs. After getting my arm nearly bitten off, I managed to kill this small group of hogs and skin them for their hides. You’re even treated to a skinning animation that’s just a touch more gruesome than the one found in Red Dead Redemption, though it seems to go by much faster.

Climbing up the radio tower presented one little concern I have about the game. While normal movement including running and jumping around seem to be pretty fluid, there are certain areas where you climb upwards and the only way to actually access them is to get to special points where you can press a button to go into an animation. This is a little archaic in terms of character movement — especially among so many games including even the most recent Zelda where climbing up a surface is incredibly fluid, but at least it did generally work well enough that I wasn’t too bothered by it in my playthrough. It’s certainly been the same way in past games of the series, but I suppose I was a little surprised that stilted movement like this hadn’t been taken away completely.

The radio tower mission revealed itself to be the start of several similar side missions that I could embark on later. Similar to Assassin’s Creed, each time you make it to the top of a new radio tower you open up more of the map. This includes points of interest and routes to your next checkpoint. This was definitely a helpful mission, as it cleared the way to later missions involving collecting various wild plants and animal hides.

Collecting these sorts of things is a much more focused and rewarding affair than in the past. Various plants can be mixed to give you herbal health remedies, as well as boosts to your defensive capability and to your accuracy when hunting. Animal hides are great for upgrading your backpack, as well as strengthening your weapons and supplies. Some collectibles — often called “fetish” items in the game — are good mainly for selling at your home base or any market for a pretty good price in order to upgrade weapons and armor or buy new ones.

Soon after a few introductory missions in the game, Dennis guided me towards Dr. Earnhardt’s mansion to possibly rescue Daisy — one of the friends from the beginning of the game who had also been kidnapped. Earnhardt is a bit eccentric himself, a possibly mad scientist who sends you on a mission involving finding a mushroom in a cave full of toxic fungi. This is definitely one of the trippier sequences in the game, and after playing through it, I hoped there would be more varied missions involving the good doctor.

One thing I noticed pretty quickly as I traversed the map is that Ubisoft is really making an effort this time to fill the map up with — well, just more of everything that the last game lacked. There are side-quests to be found all over the place, including ATV checkpoint races to deliver supplies and small self-contained story missions like one I played involving two star-crossed lovers and a whole mess of pissed off monitor lizards. There are all kinds of possibilities for emergent events, as all sorts of animals roam freely and actually obey the laws of nature.

The most exciting event in the game happened during one of these emergent moments. I had just finished a pretty meaty mission involving tons of combat in a rusted out ship. After using some stealth and then later a whole lot of molotov cocktails (I’m happy to say that the realistic burning effect is still present), I had completed the mission successfully and was just sort of wandering around when I happened to wander right into an enemy encampment.

As I hid under a deck so as not to alert the guards, I noticed a little icon on the screen informing me that if I shot at cages, I’d let the animals in them out. I didn’t really see any cages, so I crept closer until I was right underneath a guard. Finally, I noticed some sort of tropical and probably useless ostrich-looking bird sitting in a cage. Just as the guards became aware of me, I shot the cage for the hell of it and watched as one pissed-off cassowary wreaked havoc on the guards and was soon joined by a couple others. I took this momentary distraction to high-tail it out of the camp and made it about a half mile away before I was joined again by some soldiers in jeeps.

At this point my health was waning, so I popped a few shots with a semi-automatic I had looted from a guard earlier and then waited for sweet death. The screen was turning red and my breathing was becoming more labored. I crawled to a bush to let myself breathe my last breath and suddenly the guards seemed to focus their attention at something else. As my health began to regenerate, I crept closer and realized that the pack of cassowaries had followed the guards and were once again dishing out vengeance!

I honestly knew little about cassowaries before Far Cry 3. After playing the game and watching them literally kick the shit out of guards and then later kick me nearly to death, I learned from Wikipedia that they are in fact just as dangerous as depicted in the game and have even been known to disembowel other animals. I think cassowaries are my new favorite animal now, replacing the honey badger.

Emergent moments like this popped up throughout my playthrough and made the game that much more compelling and fun to play, whether I was focusing on one of the main mission objectives or just running over animals because I was on a wild killing spree.

Far Cry 3 seems to offer a very dark and possibly somewhat complex story about a ruthless psychopath and many other dangerous characters around the island. It also offers one of the more entertaining open-world experiences I’ve played in awhile. I was chased by sharks, spit at by monitor lizards, bitten by wild hogs, and kicked in the guts by cassowaries while passing through areas of both allies and foes and picking up supplies and new missions along the way. The game does a great job of blurring the line between what are the “important” main missions and what are entertaining side missions that you might wander into simply because you happen to be close by.

The game also features a huge variety of upgradeable weapons and many ways to travel about the island, as well as areas where enemies will attack you and areas where you can just chill at with your allies and buy new stuff. I came away from my playthrough believing that above all else, the Far Cry series has returned to its roots in terms of offering a great number of creative ways to cause chaos and have a ton of fun while doing so.